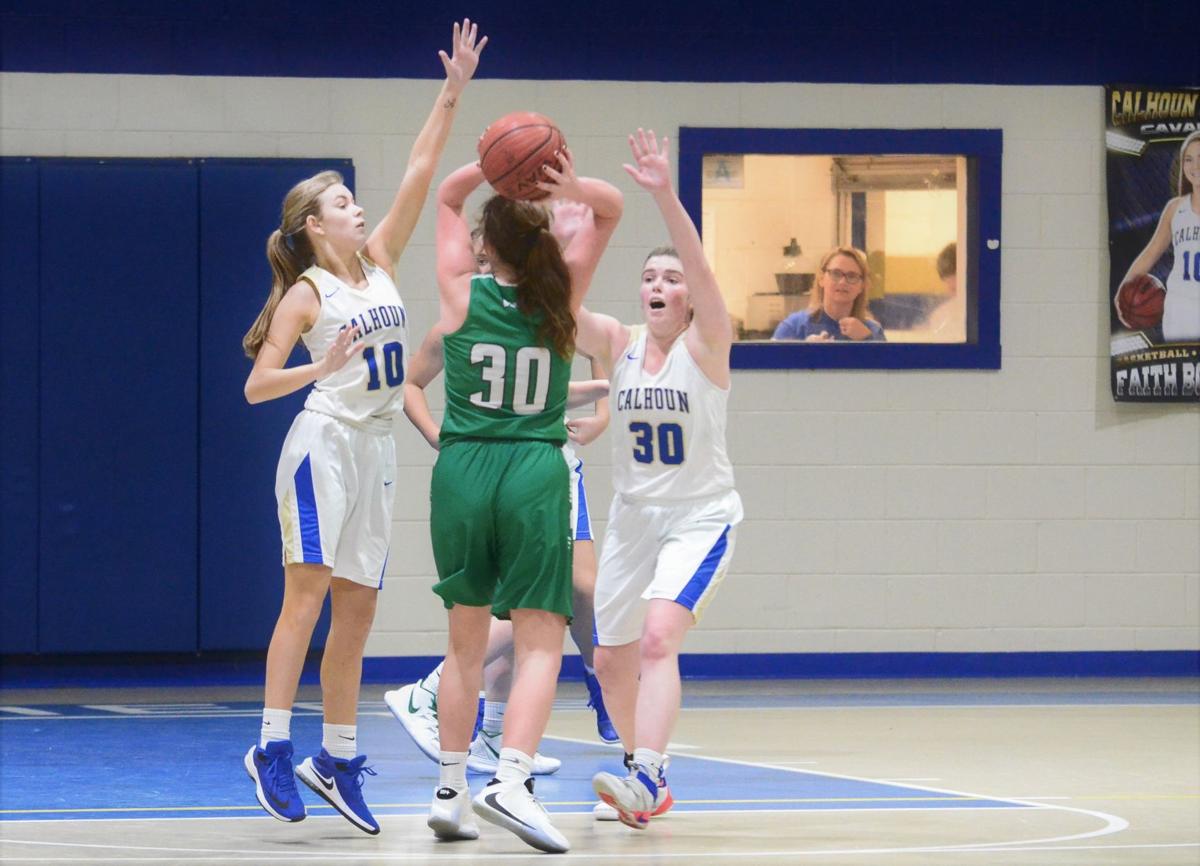 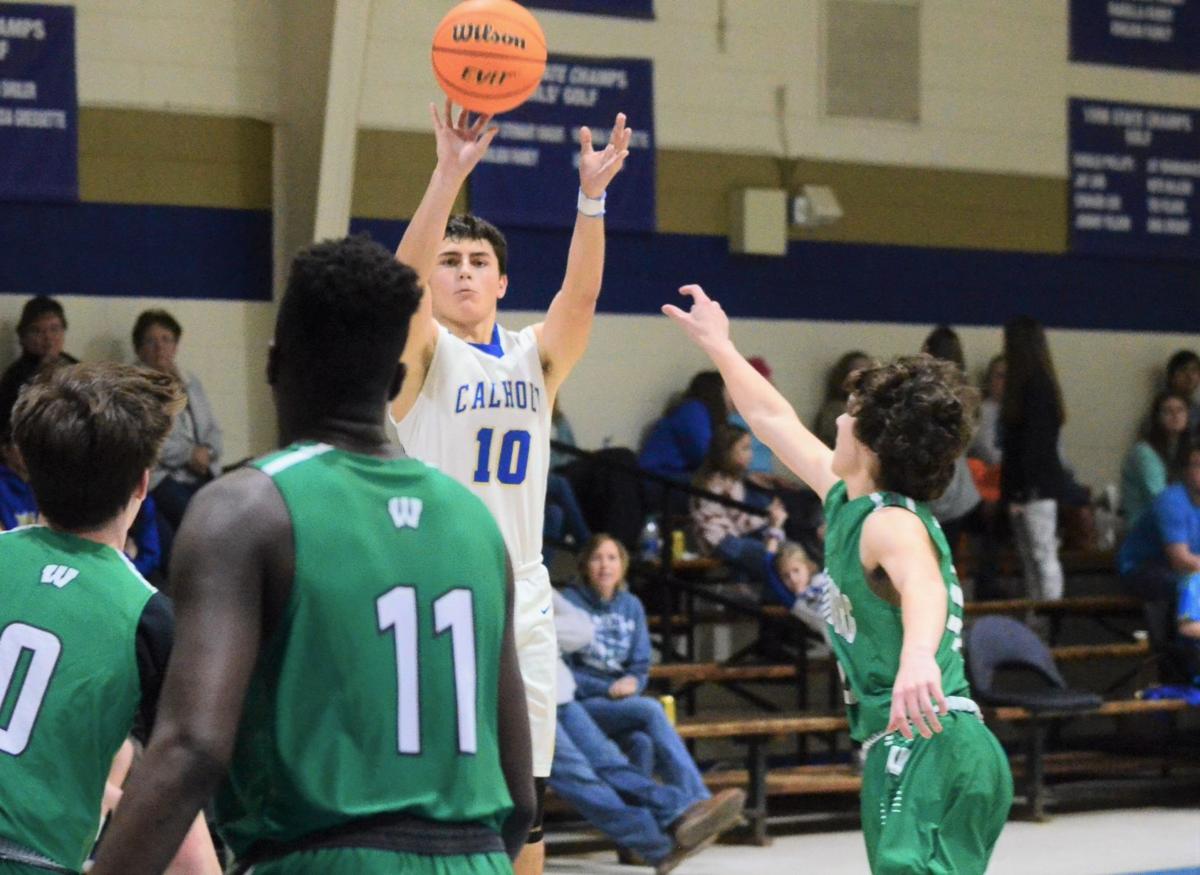 Calhoun Academy's Bates Felder (10) shoots the first of his 3 made 3-pointers in the second quarter against Williamsburg Academy during the varsity boys basketball game in St. Matthews. The Cavaliers won 62-24.

Calhoun Academy's Bates Felder (10) shoots the first of his 3 made 3-pointers in the second quarter against Williamsburg Academy during the varsity boys basketball game in St. Matthews. The Cavaliers won 62-24.

ST. MATTHEWS -- Calhoun Academy got 14 points apiece from Bates Felder and Wells Fleming on Friday night in taking a 62-24 home win in the region-opener against Williamsburg Academy.

For Williamsburg, Charlie Easter and Tyler Tanner each had 6 points.

JOHNSTON -- Wardlaw Academy got 38 points from Avery Spurlock to take a 90-89 overtime non-region win at home on Friday against Andrew Jackson Academy.

Caleb Martin had a double-double of 28 points and 20 rebounds for the winners.

AJA will play host to Patrick Henry Academy on Saturday at 3 p.m.

Calhoun County will play host to Bethune-Bowman on Saturday at 8 p.m.

NORTH -- The North Eagles picked up their first Region 3-A win of the season on Friday, with a 52-32 home victory over Ridge Spring-Monetta.

North plays at Blackville-Hilda on Tuesday.

Benjamin Davis scored scored 7 points during the late run to help propel the Indians to the victory.

A.J. Tolbert led the way for OP with a double-double of 14 points and 11 rebounds, while Will Shaw added 9 points and 9 rebounds, and Tim Junious added 14 points (including 4-for-4 from the free throw line in the final minute of play).

The Indians (9-4 overall) will host Pinewood Prep on Tuesday at 7 p.m.

DENMARK -- Denmark-Olar won 61-49 at home against Estill on Friday in Region 3-A play.

ALLENDALE -- The Edisto Cougars took a 56-37 non-region win at Allendale-Fairfax on Friday.

Edisto was led by Franklin Winds with 18 points and 3 assists, Dawn Muller with 13 points, and Chris Grant with 9 points, 9 rebounds and 4 blocks.

Edisto (11-4) will open Region 5-3A play at Strom Thurmond on Tuesday.

HHA was led by Jabari Sumpter with a double-double of 15 points and 10 rebounds, while

DA was led by Rhett Mizzell with a game-high 22 points, while Wyatt Judy added 7 points.

DA is now 1-1 in region play and will play at Andrew Jackson Academy on Tuesday at 8 p.m.

HHA will play at Clarendon Hall on Tuesday.

The Gators (1-9 record) were led by Detrick Jenkins with 16 points, Gerlante Robinson with 11 points and Maliek Fuller with 10 points

Lake Marion plays at Orangeburg-Wilkinson on Saturday at 8 p.m. in  non-region game.

ST. MATTHEWS -- Calhoun Academy opened region play with a 48-24 doubling up of Williamsburg Academy at home on Friday.

HHA was led by Halle Mott with 8 points and 8 rebounds, while Leigh Anna Johnson added 7 points.

BYRD -- The Bruinettes of Orangeburg-Wilkinson took a 64-23 non-region road win at Woodland on Friday night.

O-W was led by D'Mya Tucker with 21 points and 7 rebounds, Aaniya Davis with 16 points and 8 rebounds, and Shar'dasia Zeigler with 12 points and 6 assists.

Leading scorers for OP were Campbell Delaney with 10 points, Lindsay Salley with 7 points, and Cate Fogle with 5 points.

The Lady Indians return to action on Tuesday at home against Pinewood Prep at 5:30 p.m.

Bethune-Bowman was led by Shatwanna Lee with 13 points, and Alexis Johnson with 12 points.

COLUMBIA -- The Lady Saints of Calhoun County took a 31-28 road win at Eau Claire on Friday in Region 3-2A play.

NORTH -- The Lady Eagles of North lost 34-16 at home in Region 3-A play on Friday to Ridge Spring-Monetta.

North will play at Blackville-Hilda on Tuesday at 6:30 p.m.

D-O was led by Aijalon Wroten with 7 points, Dreek with 15 points and 14 rebounds, and Lakiyah Coleman with 5 points.

D-O will play host to Williston-Elko on Tuesday at 6 p.m.

Holly Hill Academy was led by Taylor Weathers with 2 points.

Leading scorers for OP were Ashby Garrick with 10 points, Anna Beth Lambrecht with 9 points, and Anna Brake Plummer with 8 points.

The JV Lady Indians play host to Pinewood Prep on Tuesday at 4 p.m.

The Cougars play host to Strom Thurmond on Monday.

OP will play host to Pinewood Prep on Tuesday at 5 p.m.

DA was led by Caleb Byron with 11 points and Drake Hutto with 7 points.

DA is 5-2 overall, 2-0 in region play, and will play at Andrew Jackson Academy on Tuesday.

For CA, Turner Fleming had 9 points and Kade Strickland had 8 points.

Williamsburg was led by Conrad Butler with 12 points and Bradley Muldrow added 7 points.

The Indians (2-3) were led by 11 points from Hall and 7 points apiece from both Ravenell and Harris Holstein. Jody Gillam and Walt Mims each added 6 points.

OP will play host to Thomas Sumter Academy on Monday at 5 p.m.

OP will host Thomas Sumter Academy on Monday at 4 p.m.