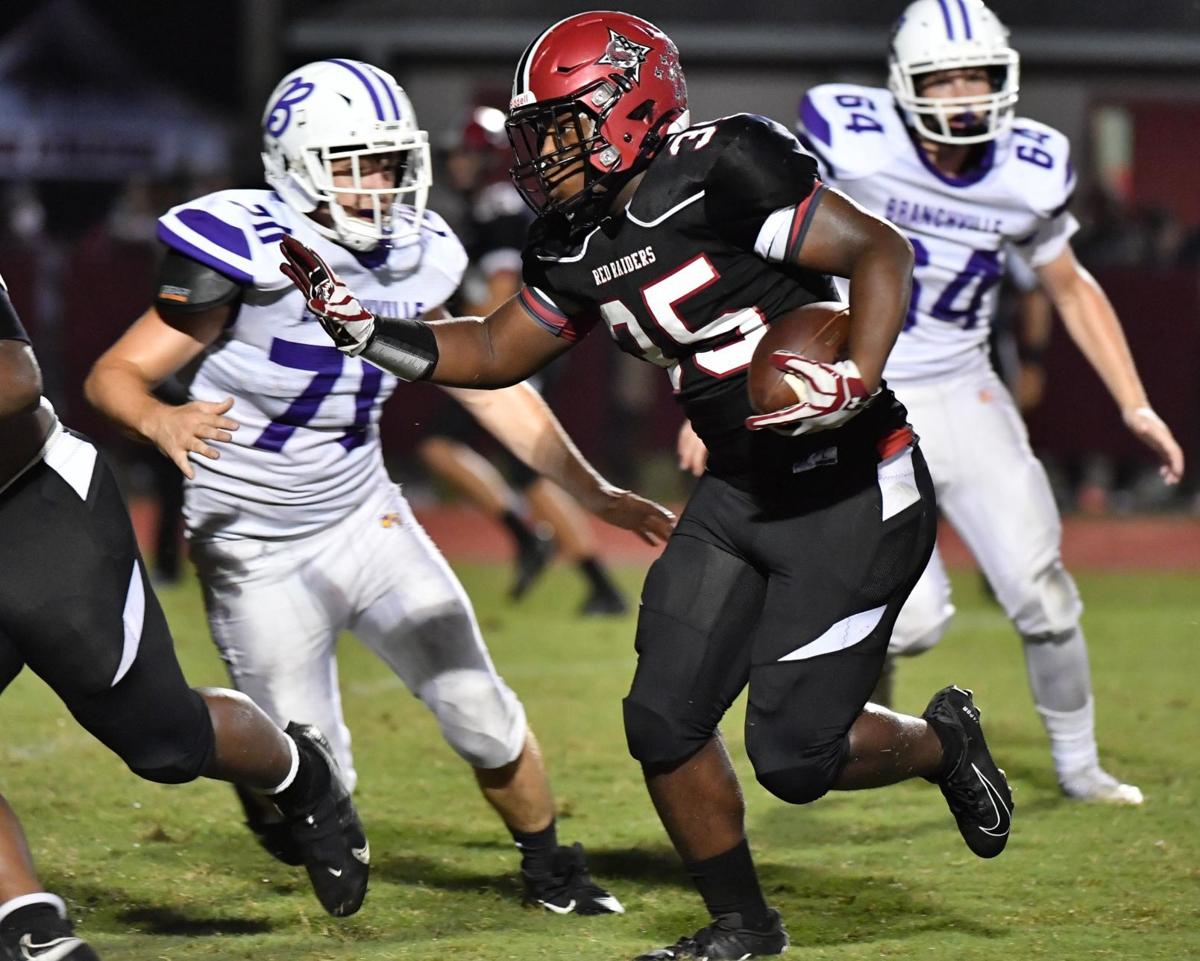 Bamberg-Ehrhardt running back Quintin Banks (35) looks for running room against the Branchville defense during Friday night's game in Bamberg. 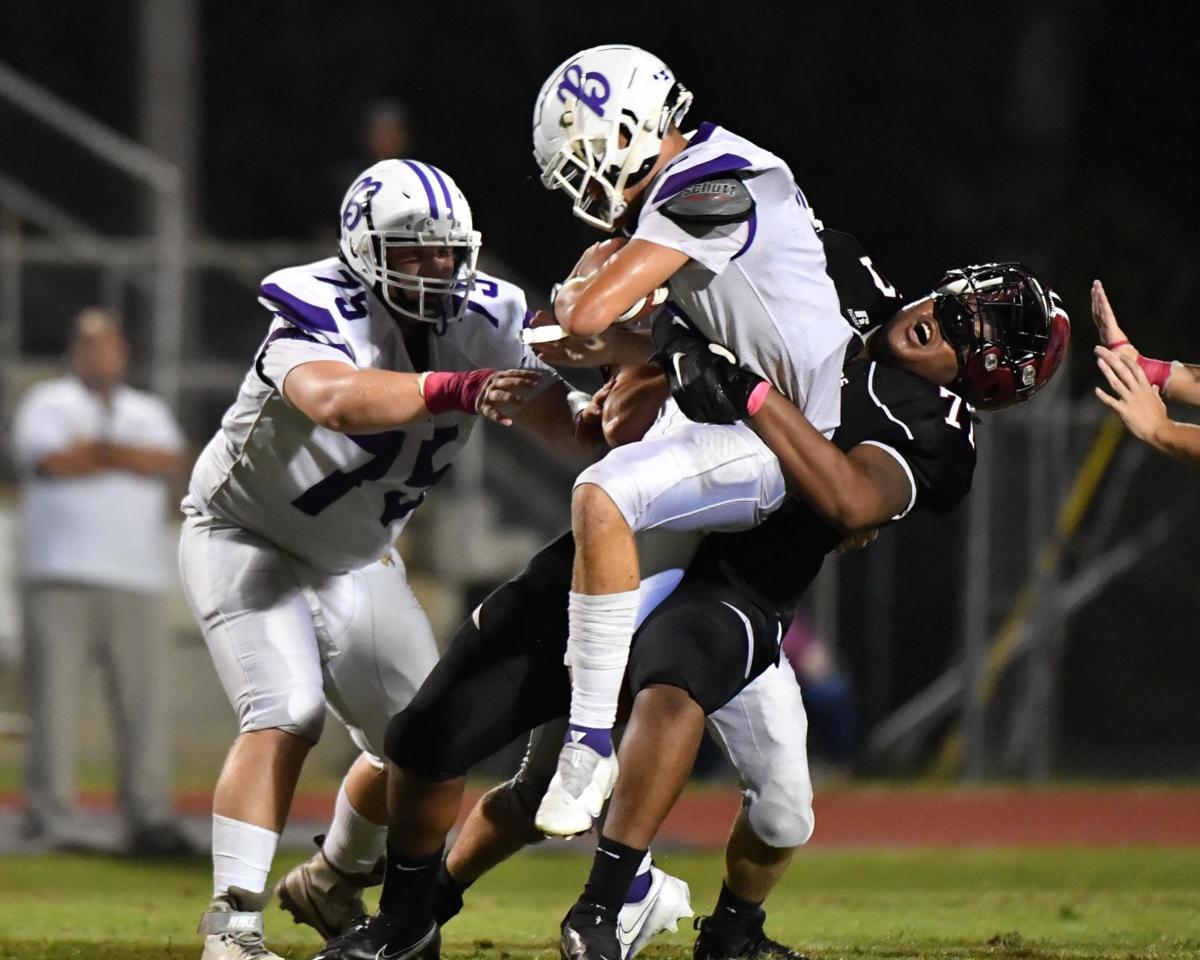 “First half, our kids played hard, we had some adversity there and things weren’t going our way,” Red Raiders head coach Robert Williams said. “But we came out in the second half, caught a few breaks and everything worked out for us.

“We’ve got some good running backs, our offensive line has been doing a good job, and we just decided to try to wear on them and wear them down in the second half. Just like any season, you can look good one week and another week you see things that you know have to get better. Overall, I think we are getting better each week, in every phase of the game.”

The Yellow Jackets opened the scoring by driving 67 yards in 10 plays on the first possession of the game. Senior quarterback Ronnie Nester found senior tight end Kadden Irick over the middle between two defenders for a 25-yard scoring strike on third down. Senior Clancy Welch added the PAT for a 7-0 advantage with 8:53 left in the first quarter.

The Red Raiders answered with a 56-yard drive in just 5 plays on their first possession, as senior running back Quintin Banks bowled over defenders near the goal line for a 10-yard score. Junior kicker James McIntosh added the PAT for a 7-7 tie with 7:15 left in the opening quarter.

After both teams exchanged punts to end stalled drives, junior defensive back Jaha’Mari Harper intercepted a pass by Nester near midfield.

Each team had another drive stall in the following two series.

The home team then took the lead with 8:03 left before the half on a 78-yard drive that lasted just 1:49 on the game clock. Junior quarterback Gage Boykin highlighted the series with passes of 13 yards and 42 yards, before Banks scored from 4 yards out and McIntosh added the PAT for the 14-7 lead.

The home team was ahead at the break, and had 142 yards rushing, but more than 80 yards in penalties left the B-E faithful in the stands expecting better results in the second half.

The Red Raiders answered that call, driving 67 yards on the opening possession of the third quarter for a score. Sophomore tailback Nick Folk carried the ball 5 times on the drive, including the final 6 yards for the score. McIntosh added the PAT for a 21-7 lead.

After the B-E defense allowed just a single first down gain for BHS, the Red Raiders’ offense was back at it, going 75 yards in 4 plays, aided by two penalties by BHS, to score with 2:36 left in the third quarter. Boykin found sophomore wideout Isaiah Johnson 25 yards out and Johnson ran it the final 28 yards on a 47-yard scoring strike. The kick from McIntosh made it 28-7.

Boykin called his own number and ran in for a touchdown from 15 yards out with 9:42 left, capping off a 52-yard drive. The PAT was not kicked after a mishap on the snap and hold, leaving the score 34-7.

Senior lineman Jerome Simmons finished the scoring with 7:26 left to play, when BHS attempted a punt but had a wide snap on the play. Simmons converted the scoop and score from a few yards out, for the 40-7 final. The PAT attempt was blocked by Branchville senior Connor Carleton.

For Branchville, sophomore tailback Philijuan Saldano had 14 carries for 65 yards.

“Branchville has a great team, they play hard and they are coached real well,” Williams said. “Our kids just played good at the end and we came away with the win.”

B-E plays at Blackville-Hilda next Friday at 7 p.m., while Branchville will play host to Allendale-Fairfax.

Denmark-Olar (4-2) is averaging nearly 50 points per game this season thanks to the offensive trio of T.J. Williams, Keithan Washington and Ch…

SC STATE FOOTBALL: "Amazing to be back' for homecoming

The definition of homecoming is the returning to a place regarded as home.

South Carolina State had much to celebrate Saturday as the Bulldogs defeated Morgan State 37-14 before a spirited homecoming crowd.

South Carolina State's football team will be at home for just the second time this season Saturday when they welcome Morgan State to Oliver C.…

Safe to say Bamberg County is the hot spot for high school football right now in The T&D Region.

S.C. State and Morgan State fans will have an opportunity to show support for their teams prior to Saturday's homecoming matchup.

Bamberg-Ehrhardt running back Quintin Banks (35) looks for running room against the Branchville defense during Friday night's game in Bamberg.