TOKYO (AP) — When Olympic diver Tom Daley announced in 2013 that he was dating a man and "couldn't be happier," his coming out was an act of courage that, with its rarity, also exposed how the top echelons of sport weren't seen as a safe space by the vast majority of LGBTQ athletes.

Back then, the number of gay Olympians who felt able and willing to speak openly about their private lives could be counted on a few hands. There'd been just two dozen openly gay Olympians among the more than 10,000 who competed at the 2012 London Games, a reflection of how unrepresentative and anachronistic top-tier sports were just a decade ago and, to a large extent, still are.

Still, at the Tokyo Games, the picture is changing.

A wave of rainbow-colored pride, openness and acceptance is sweeping through Olympic pools, skateparks, halls and fields, with a record number of openly gay competitors in Tokyo. Whereas LGBTQ invisibility used to make Olympic sports seem out of step with the times, Tokyo is shaping up as a watershed for the community and for the Games — now, finally, starting to better reflect human diversity.

"It's about time that everyone was able to be who they are and celebrated for it," said U.S. skateboarder Alexis Sablone, one of at least five openly LGBTQ athletes in that sport making its Olympic debut in Tokyo.

"It's really cool," Sablone said. "What I hope that means is that even outside of sports, kids are raised not just under the assumption that they are heterosexual."

The gay website Outsports.com has been tallying the number of publicly out gay, lesbian, bisexual, transgender, queer and nonbinary athletes in Tokyo. After several updates, its count is now up to 168, including some who petitioned to get on the list. That's three times the number that Outsports tallied at the last Olympics in Rio de Janeiro in 2016. At the London Games, it counted just 23.

"The massive increase in the number of out athletes reflects the growing acceptance of LGBTQ people in sports and society," Outsports says.

Daley is also broadcasting that message from Tokyo, his fourth Olympics overall and second since he came out.

After winning gold for Britain with Matty Lee in 10-meter synchronized diving, the 27-year-old reflected on his journey from young misfit who felt "alone and different" to Olympic champion who says he now feels less pressure to perform because he knows that his husband and their son love him regardless.

"I hope that any young LGBT person out there can see that no matter how alone you feel right now you are not alone," Daley said. "You can achieve anything, and there is a whole lot of your chosen family out here."

"I feel incredibly proud to say that I am a gay man and also an Olympic champion," he added. "Because, you know, when I was younger I thought I was never going to be anything or achieve anything because of who I was."

Still, there's progress yet to be made.

Among the more than 11,000 athletes competing in Tokyo, there will be others who still feel held back, unable to come out and be themselves. Outsports' list has few men, reflecting their lack of representation that extends beyond Olympic sports. Finnish Olympian Ari-Pekka Liukkonen is one of the rare openly gay men in his sport, swimming.

"Swimming, it's still much harder to come out (for) some reason," he said. "If you need to hide what you are, it's very hard."

Only this June did an active player in the NFL — Las Vegas Raiders defensive end Carl Nassib — come out as gay. And only last week did a first player signed to an NHL contract likewise make that milestone announcement. Luke Prokop, a 19-year-old Canadian with the Nashville Predators, now has 189,000 likes for his "I am proud to publicly tell everyone that I am gay" post on Twitter.

The feeling that "there's still a lot of fight to be done" and that she needed to stand up and be counted in Tokyo is why Elissa Alarie, competing in rugby, contacted Outsports to get herself named on its list. With their permission, she also added three of her Canadian teammates.

"It's important to be on that list because we are in 2021 and there are still, like, firsts happening. We see them in the men's professional sports, NFL, and a bunch of other sports," Alarie said. "Yes, we have come a long way. But the fact that we still have firsts happening means that we need to still work on this."

Photos: Taboo in Tokyo, tattoos are aplenty at Olympics

The win helped the U.S. star make up for what has so far been the worst showing of her Olympic career. Get the latest on the Tokyo Olympics here. 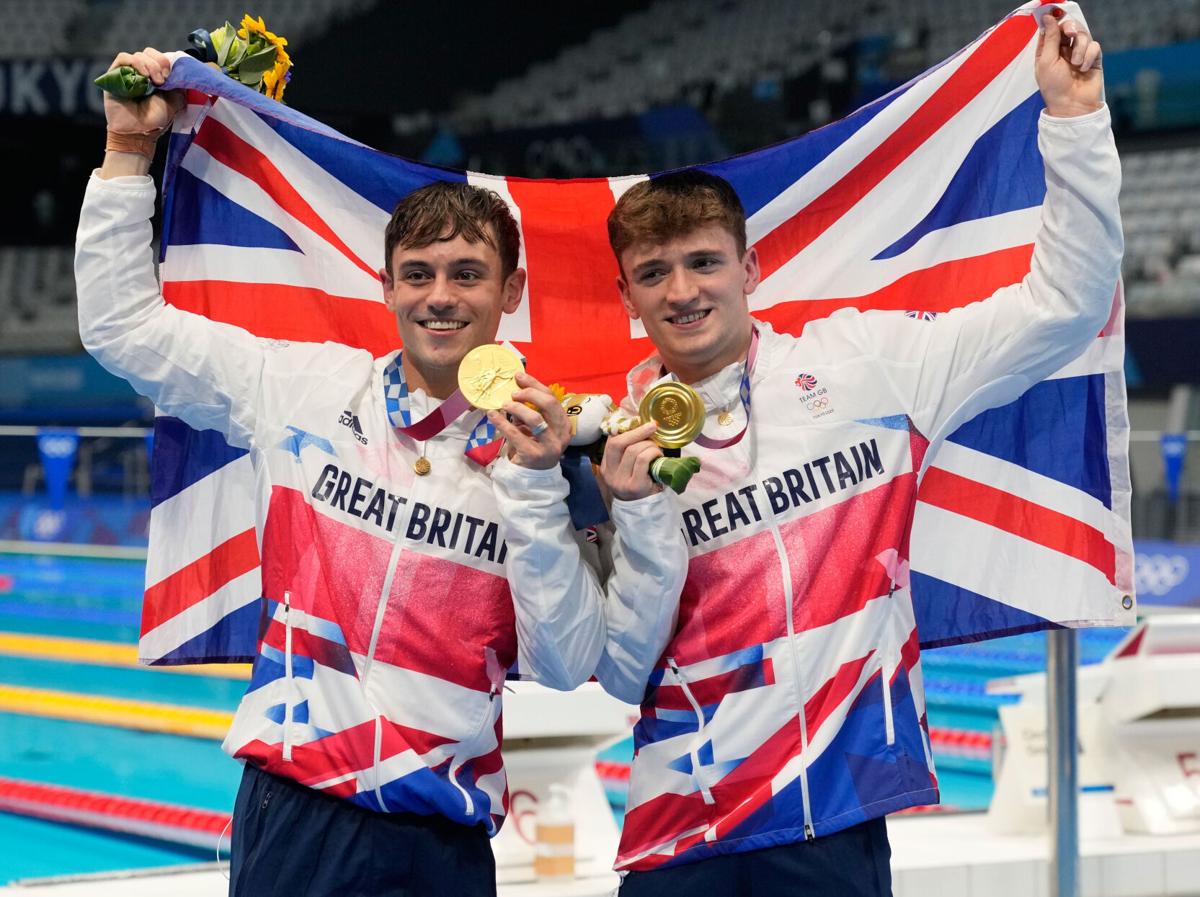 In this July 26, 2021, file photo, Thomas Daley and Matty Lee of Britain, pose for a photo after winning gold medals during the men's synchronized 10-meter platform diving final at the Tokyo Aquatics Centre at the 2020 Summer Olympics in Tokyo, Japan. 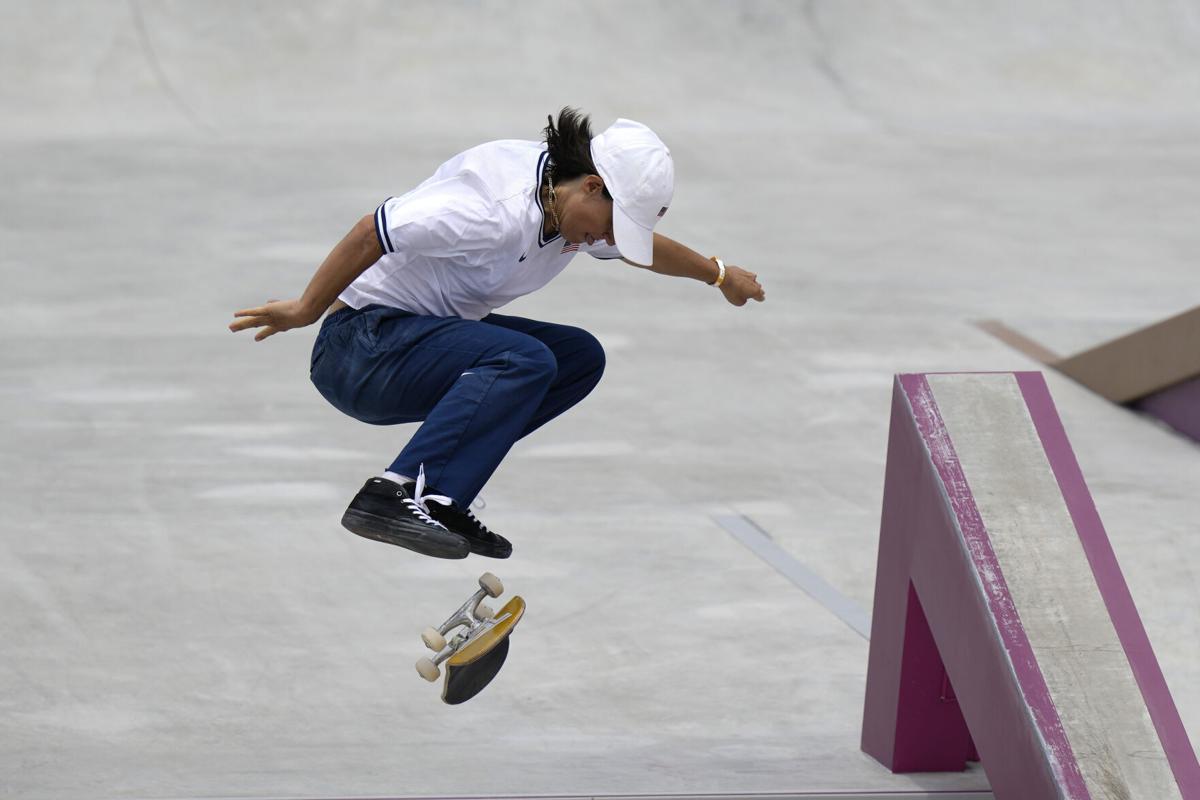 Alexis Sablone of the United States competes in the women's street skateboarding finals at the 2020 Summer Olympics in Tokyo, Japan. The Tokyo Games are shaping up as a watershed for LGBTQ Olympians. Openly gay Sablone says “it’s about time.”