NEW YORK — When Serena Williams told the umpire at the U.S. Open final that he owed her an apology, that he had stolen something from her, and then she got penalized for her words, Breea Willingham could relate to her frustration and anger.

Willingham isn't a tennis star, but she is a black woman. She and others like her say Williams' experience resonates with them because they are often forced to watch their tone and words in the workplace in ways that men and other women are not.

And if they're not careful, they say, they risk being branded "Angry Black Woman."

"So much of what she experiences we experience in the workplace, too," said Willingham, a professor of criminal justice at the State University of New York at Plattsburgh. "As black women ... we're expected to stay in our lane, that lane that has been created for us. Any time we step out of that lane, then we become a problem."

The stereotype of the "Angry Black Woman" is alive and well, said Felicia Martin, 36, a federal employee who lives in Brooklyn. She recalls once seeing a white female co-worker cursing and throwing things and not facing repercussions, while she's been told to calm down for expressing her own upset in a normal tone of voice.

"If I'm upset about something, I should get to express that to you," Martin said.

During Saturday's championship loss to Naomi Osaka, Williams got a warning from the chair umpire for violating a rarely enforced rule against receiving coaching from the sidelines. An indignant Williams emphatically defended herself, denying she had cheated. A short time later, she smashed her racket in frustration and was docked a point. She protested that and demanded an apology from the umpire, who penalized her a game.

Many people, black women among them, echoed Williams' contention that she was punished while men on the tennis circuit have gotten away with even harsher language.

"A lot of things started going through my head in that particular situation. You know, first and foremost, what was going to be said about her the next day? The typical angry black woman, you know ... when she really was just standing up for herself and she was standing up for women's rights," said former tennis champion Zina Garrison, who is black. "A woman, period, is always, when we speak up for ourselves, then you have the situation where people are saying, you know, they're too outspoken. They're acting like a man, all of that. But then a black woman on top of that, the angry black woman, who does she think she is?"

Martin and others pointed to a cartoon by an Australian artist as the clearest example of the stereotype facing black women. Mark Knight of Melbourne's Herald Sun depicted Williams as an irate, hulking, big-mouthed black woman jumping up and down on a broken racket. The umpire was shown telling a blond, slender woman — meant to be Osaka, who is actually Japanese and Haitian — "Can you just let her win?"

"I was deeply offended. This is not a joke," said Vanessa K. De Luca, former editor in chief of Essence magazine, who wrote a column about the U.S. Open furor.

The cartoonist "completely missed the point of why she was upset," De Luca told The Associated Press. "It was about her integrity, and anybody who doesn't get that is perpetuating the erasure that so many black women feel when they are trying to speak up for themselves. It's like our opinions don't matter."

Some black women say they have to worry perpetually about how they're coming across to make sure they're not dismissed as angry or emotional.

"It's exhausting," said Denise Daniels, 44, of the Bronx, who works in professional development for educators. "It does diminish from the work satisfaction that other people get to enjoy because it is an additional cost."

Willingham thinks that was part of Williams' experience on Saturday as well, but that it was also about a career's worth of frustrations that she has had to endure, such as when the French Open banned the type of catsuit she wore.

"I felt it for her. I felt she was fed up, she was tired of this," Willingham said. "How much is she supposed to take, really? How much are any of us supposed to keep taking?" 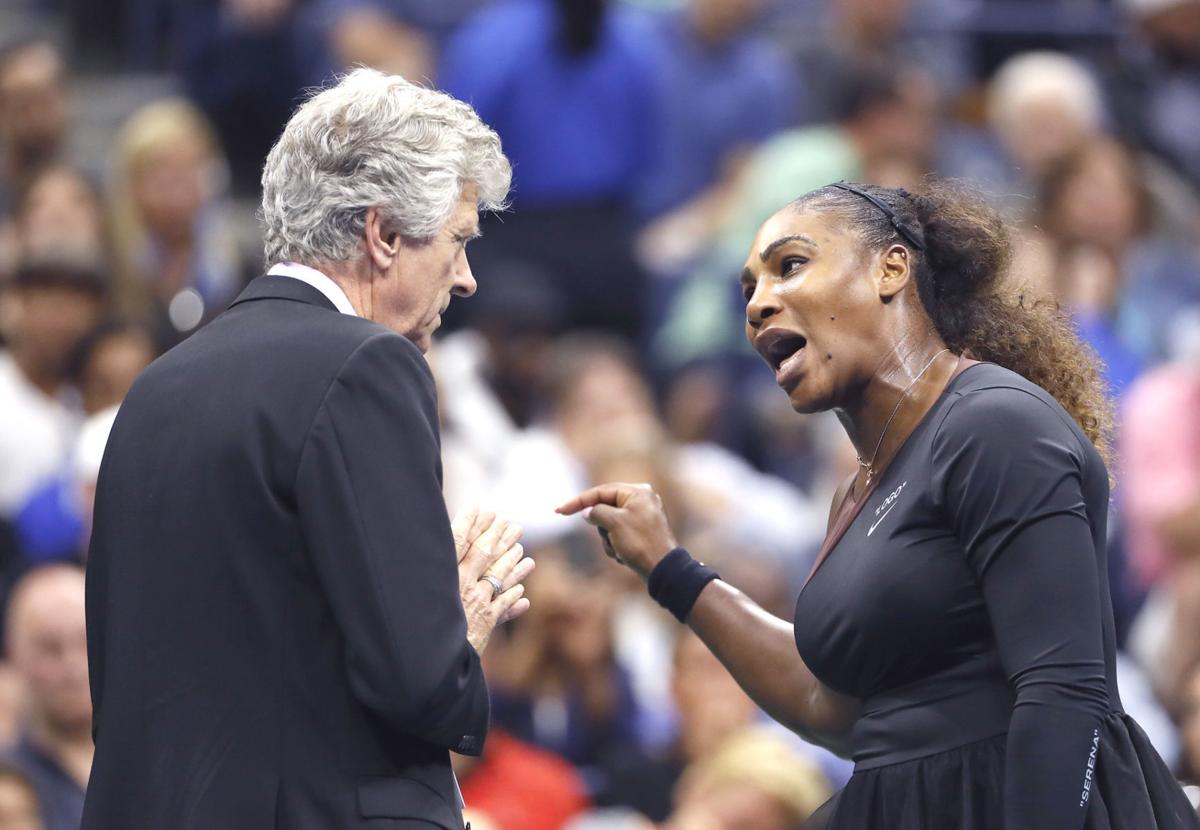 Serena Williams, right, talks with referee Brian Earley during the women's final of the U.S. Open tennis tournament against Naomi Osaka, of Japan, in New York. Some black women say Serena Williams’ experience at the U.S. Open final resonates with them. They say they are often forced to watch their tone and words in the workplace in ways that men and other women are not. Otherwise, they say, they risk being branded an "Angry Black Woman." 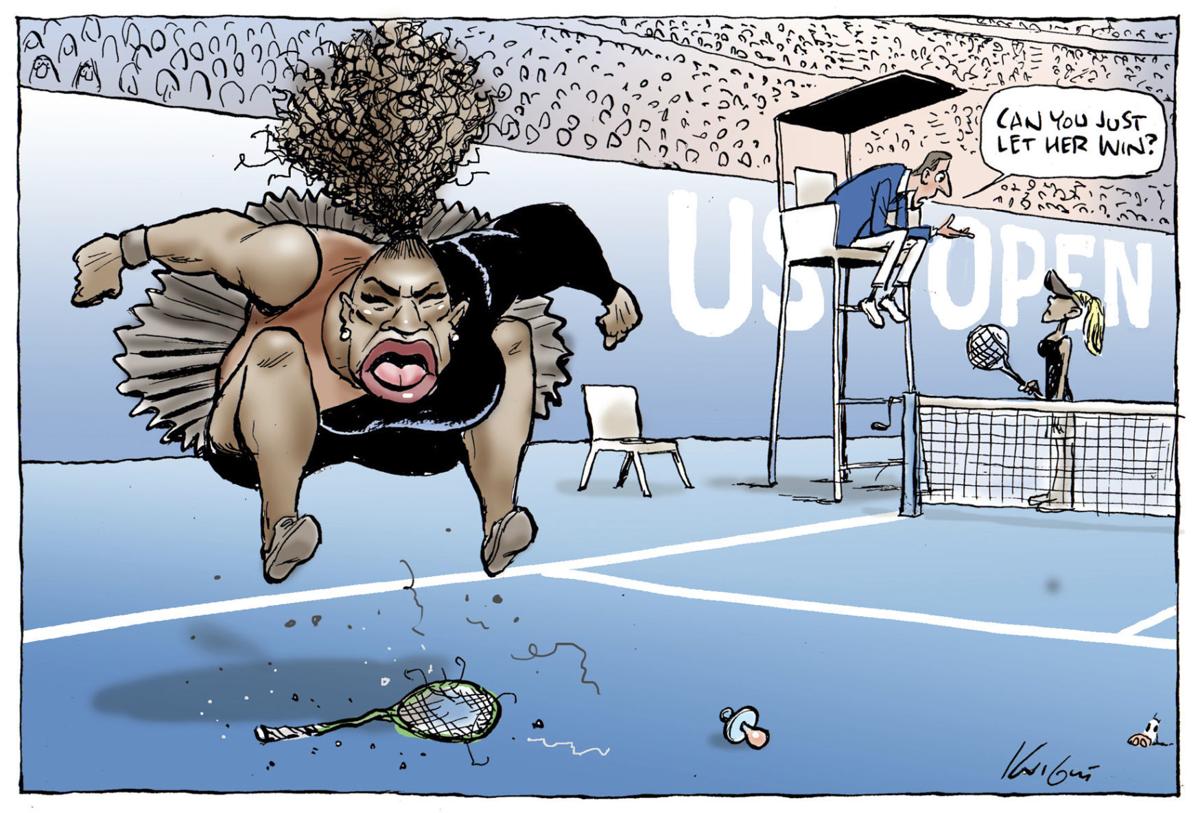 This Mark Knight's cartoon published by the Herald Sun depicts Serena Williams as an irate, hulking, big-mouthed black woman jumping up and down on a broken racket. The umpire was shown telling a blond, slender woman — meant to be Naomi Osaka, who is actually Japanese and Haitian — "Can you just let her win?"