Coronavirus update: US retail sales regain pre-virus level but slowdown is likely. Get caught up.

Players and coaches, for the most part, can control or at least help decide the outcome of football games.

Controlling the weather is a different story.

Just 3 weeks ago, monitoring the heat index and utilizing wet bulb globe temperature-monitoring devices were the main focus on Palmetto State fields. But, this week, it's all about watching the latest on Hurricane Dorian and concern about playing conditions for Friday.

So far in The T&D Region, only Orangeburg Prep has had to cancel a Week 2 contest. Friday’s opponent, Christian Academy of Myrtle Beach, is among the many coastal schools that appeared at the most risk from the impending storm winds and rain.

THURSDAY MORNING QUARTERBACK: Week One kicks off the season in full

Exactly how the next couple of days will unfold is still even the best meteorologist’s guess.

What’s certain is that fans can visit www.thetandd.com, www.schsl.org and www.scisa.org for the latest game updates, while also checking with their local school office.

Team of the week

The Trojans snapped a three-game losing streak dating back to last season with the 7-0 shutout of Eau Claire. It was also the first win under new head coach Tony Felder.

Edisto is off to a 2-0 start under first-year head coach Preston Deaver. It’s the first undefeated start for the Cougars since 2001 ... Bamberg-Ehrhardt improved to 7-1 all-time against Orangeburg-Wilkinson with this past Friday’s 17-13 win ... Branchville is off to a 2-0 start for the third consecutive year ... North is seeking its first win since October 2014 this Friday against Bethune-Bowman … Andrew Jackson Academy has won 49 of its last 50 games, but has Calhoun Academy (2-0) coming to town on Friday.

Three coaches with T&D Region ties will be enshrined in the S.C. Football Coaches Association’s Hall of Fame after this season. They are Allen Sitterle, who led Daniel to four state titles and most recently won two SCISA 8-man titles at Andrew Jackson Academy (2015 and 2016); Rusty Charpia, who won 240 career games, led James Island to a 1974 Class 3A title and served as head coach at Woodland High School; and South Carolina State graduate James “Nate” Thompson, who led Carvers Bay to a 2006 Class A Division II title. The three are among nine inductees who will be honored at the Dec. 13 ceremony in Myrtle Beach. 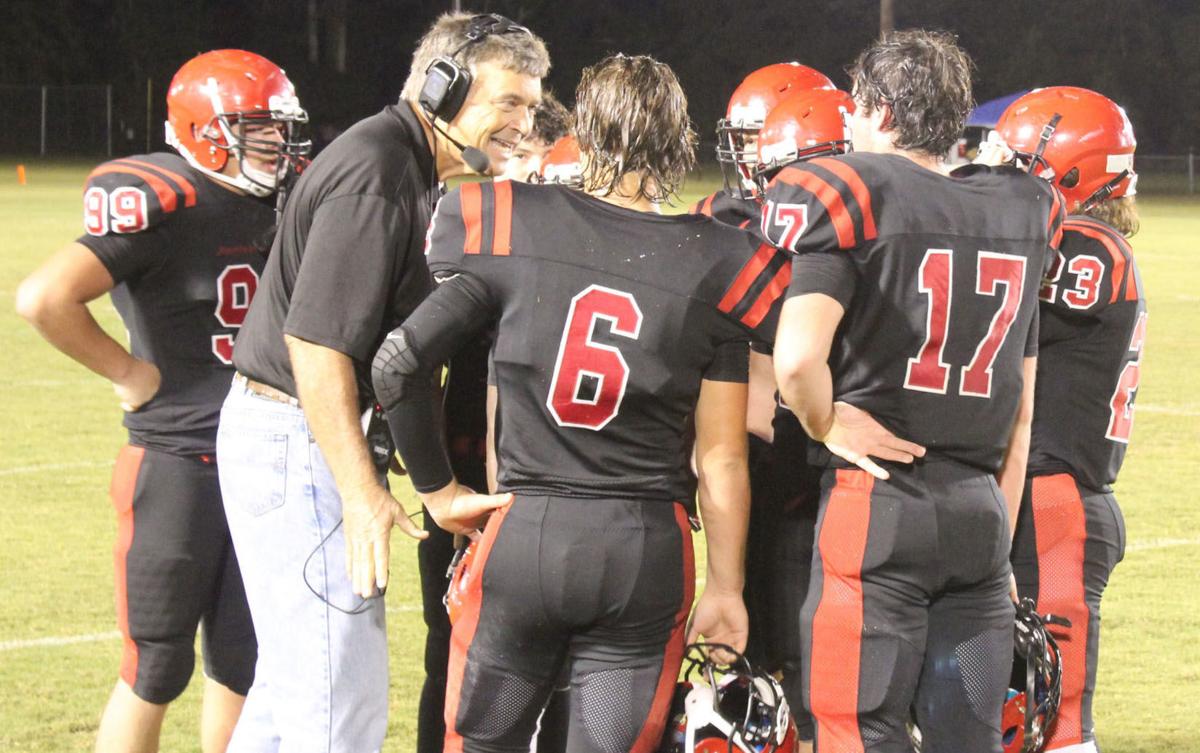 Then-Andrew Jackson Academy head football coach Allen Sitterle talks to his offense during a 2018 playoff overtime win over Wardlaw. Sitterle, who coached AJA to SCISA 8-man state titles in 2015 and 2016 and to a runner-up finish in 2018, has been selected for induction into the South Carolina Football Coaches Association’s Hall of Fame. After 2018, Sitterle left the sidelines and team for the stands and family. He plans to attend Bamberg-Ehrhardt games this season to support his grandson, Hunter Bridges, senior quarterback for the Red Raiders. Both B-E and AJA are off to 1-0 starts in 2019. AJA is being led by first-year head coach Jason Peek.