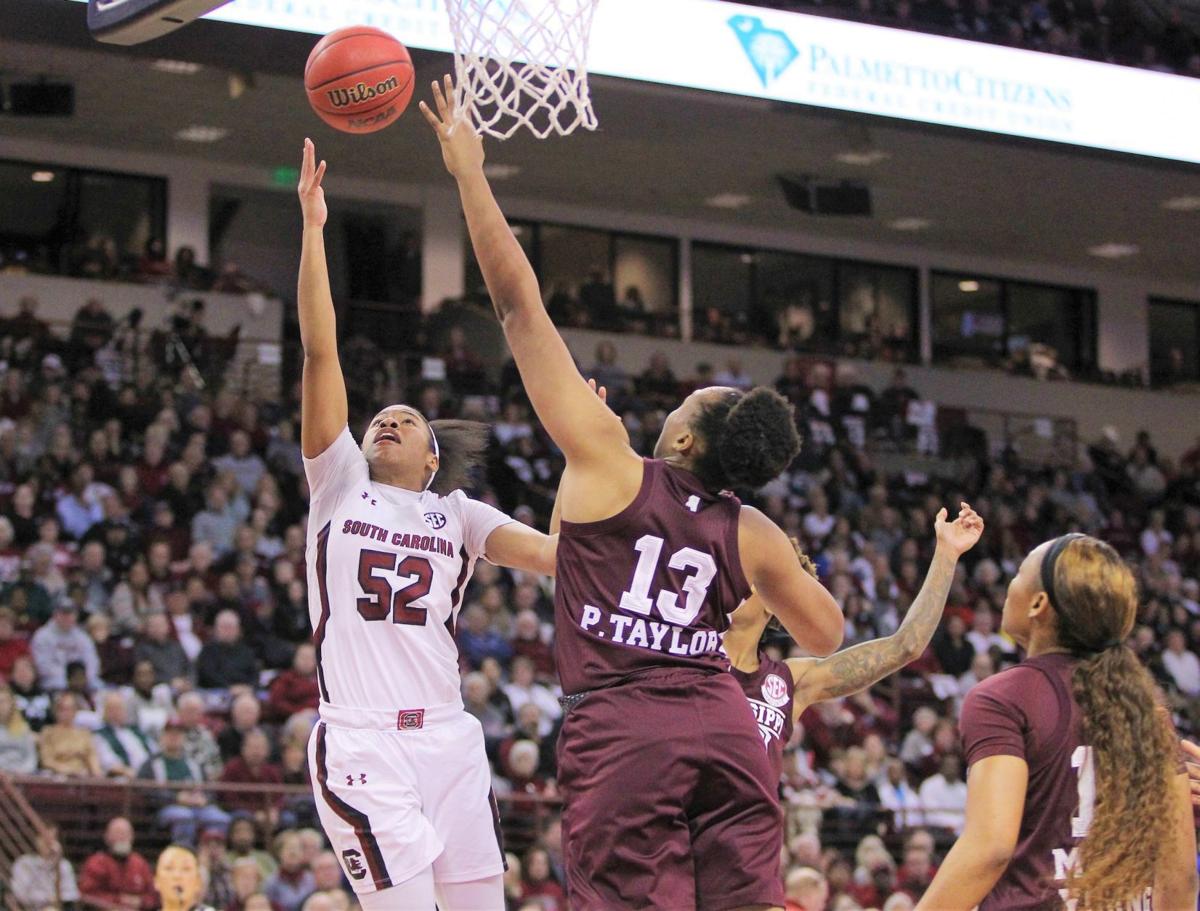 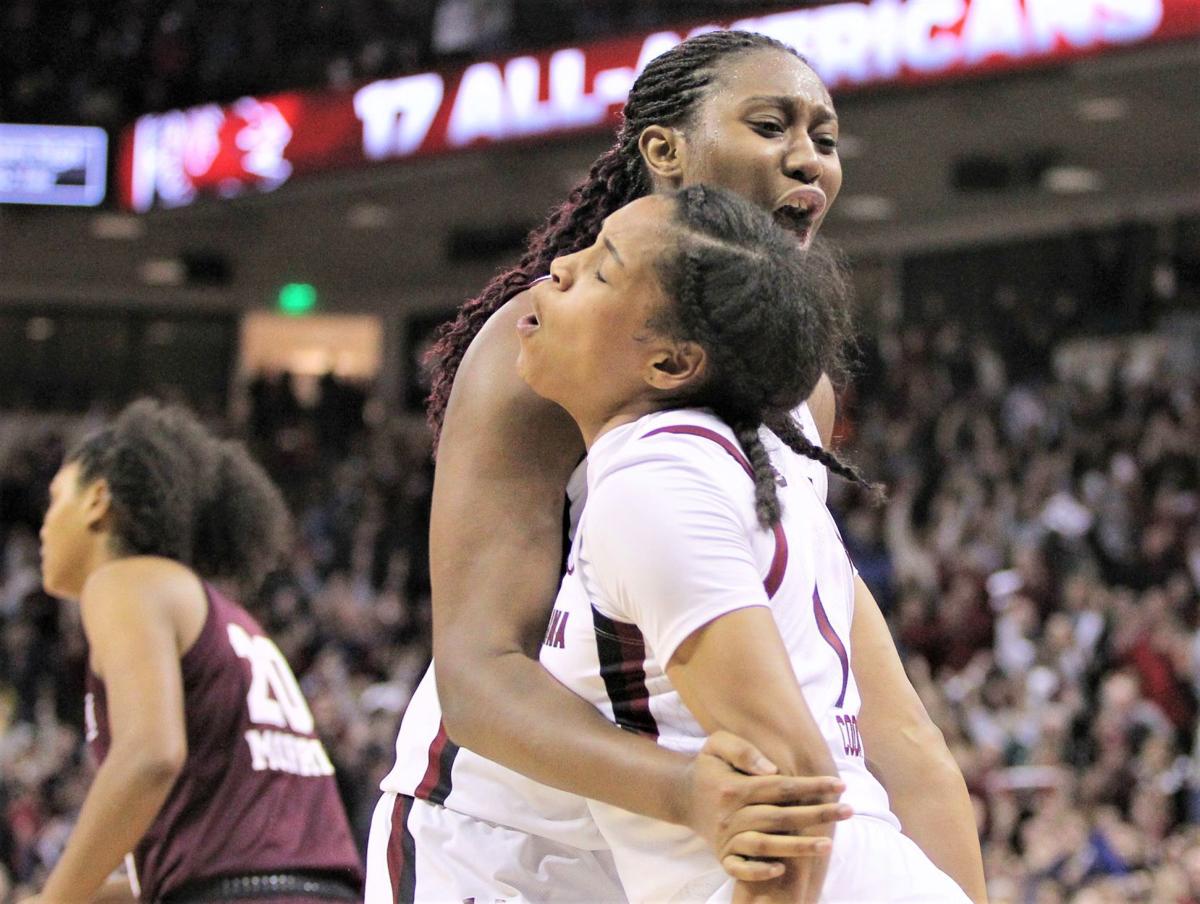 COLUMBIA (AP) — Tyasha Harris scored a season-high 23 points including the go-ahead basket with 2:01 left, as No. 1 South Carolina rallied from nine-points down in the final quarter to outlast No. 9 Mississippi State 81-79 on Monday night.

Mississippi State (17-3, 4-1 Southeastern Conference) had several chances to go back in front late, but could not.

Rickea Jackson and Jordan Danberry both missed shots that could have put the Bulldogs back in front in the final two minutes. And South Carolina freshman Zia Cooke stole Mississippi State's last inbounds pass with 4 seconds left and ran out the clock.

Harris scored the final five points for the Gamecocks (18-1, 6-0), who won their 12th straight and got a sixth victory in seven meetings with a Top-25 opponent this season.

South Carolina freshman Aliyah Boston had a double-double of 21 points and 12 rebounds.

Mississippi State looked like it might beat its second straight No. 1 opponent — the first came when it famously ended UConn's 111-game win streak at the 2017 national semifinals — as it went ahead 71-62 early in the final period.

But the Gamecocks used a 12-2 run to move back in front on Cooke's three-point play and set up the final dramatic moments.

Jackson and Danberry had 16 points each to lead the Bulldogs, who saw their eight-game win streak snapped.

The Bulldogs did not score in the final 3:28 as they missed their final five shots.

South Carolina came out fast, as it has all season, with seniors Harris and Herbert Harrigan steadily helping the team to a 33-21 lead with less than seven minutes left to the half.

That's when the defending SEC champion Bulldogs dug in to tighten things up with a 21-10 surge to cut South Carolina's double-digit lead to 43-42 at the break.

Xaria Wiggins scored all eight of her first-half points in that stretch while Jackson had a three-point play and another bucket.

By the time Danberry shoveled a pass to 6-foot-5 Promise Taylor for a close-in basket with 3.2 seconds to go, the Bulldogs were within a point and running into the locker room with cheers and smiles.

Mississippi State: The Bulldogs look quicker and peskier this season without last year's SEC player of the year Teaira McCowan. But speed could not contain Boston and South Carolina's rugged inside players down the stretch.

South Carolina: The Gamecocks hadn't been pushed in quite some time and gave a strong response about where they're headed. Cooke and Boston, both freshmen, continue to shine while Harris, one of two remaining players from their 2017 national championship team, is a savvy, steady leader.

Gamecocks hold to No. 1 ranking

The Gamecocks received 22 first-place votes from a 30-member media panel Monday. The Lady Bears got six.

Connecticut moved up to third after previous No. 3 Stanford lost to Oregon by 32 points. The Ducks moved up to No. 4. Louisville was fifth, sandwiched between Oregon and Stanford. Louisville received the other two first-place votes.

South Carolina got a late steal to win against Mississippi State on Monday night.

Northwestern entered the Top 25 for the first time this season, coming in at No. 22. The Wildcats last were ranked for the first nine week of the 2015-16 season.

Joe McKeown's team has lost only to No. 11 DePaul and No. 19 Iowa. The longtime coach got his 700th career victory earlier this season.

The Wildcats have a big week ahead, with Big Ten games at Michigan State and Maryland.

Missouri State fell out of the poll after losing to Southern Illinois on Friday night.

Game of the week

Connecticut and Tennessee will play each other for the first time in more than a decade. The two women's basketball powers will play the first of a home-and-home set Thursday in Hartford, Connecticut. They last played in 2007.

GREENVILLE — Zia Cooke scored 17 points and Aliyah Boston had 15 points and 11 rebounds as No. 7 South Carolina rolled past No. 14 Tennessee 6…

Five University of South Carolina football players have been invited to the 2021 NFL Scouting Combine, it was announced Wednesday. The Gamecoc…

GREENVILLE — Zia Cooke knows things have changed for South Carolina. She and her teammates took the first step at changing them back at the SE…

COLUMBIA - The University of South Carolina baseball team opened its three-game series with Mercer with a 5-1 win Friday night at Founders Park.

CAROLINA BASEBALL: Winning late and having fun doing it

Will Sanders didn’t even crack a smile.

COLUMBIA - The quartet of Brannon Jordan, Jackson Phipps, Will Sanders and Brett Kerry combined for the University of South Carolina baseball …