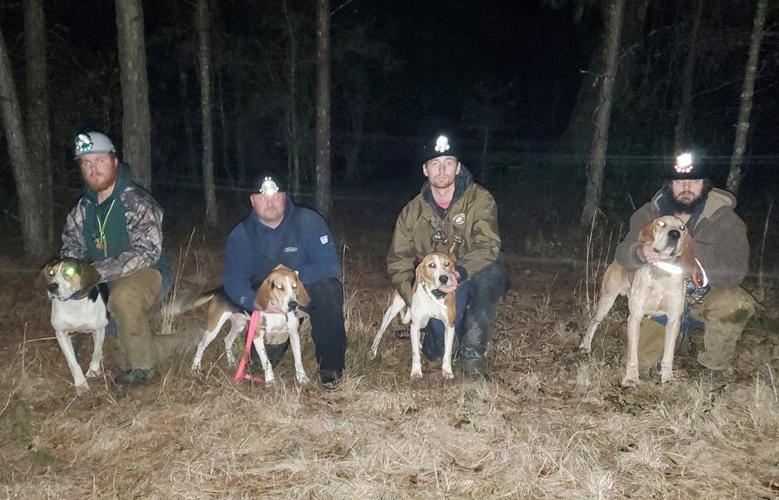 The Final Four cast in the 2021 Grand American Coon Hunt, hosted by the Orangeburg County Fairgrounds. 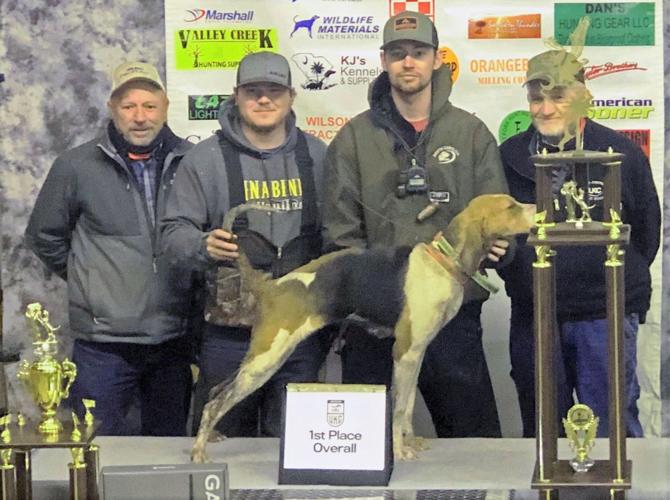 Coon hunting is a sport, no, it is a lifestyle rooted deep in tradition. One of the strongest traditions in coon hunting is the storied Grand American Coon Hunt and Show on the first full weekend of the year in Orangeburg.

The year 2021 was no different, as the strength of the clubs in the state and the leadership from the officers and board members proved that not even a global pandemic could keep it from not only happening but being extremely successful.

As is the case most years, the weather was a little unpredictable. We had a rainy, dreary Friday, followed by a near perfect 50-degree Saturday when the sun shed its light on the Orangeburg County Fairgrounds to a host of event participants and walk around traffic alike. The wide array of vendors on the grounds always impresses me, as well as the diversity of the merchandise available. If you think that it’s all just lights, boots and leashes, you would be very wrong. I’ll leave it at that, and you will just have to come check it out for yourself.

In 2021, the Grand American decided to host a two-day bench show that attracted a crowd that was refreshing to see. While I spend most of my time at this event couped up in the hunt office, after looking at the event reports, it was the cream of the crop in the sport competing with a treeing walker female, NGRCH CCH GRCH ‘PR’ Red Eagle Second Wind, owned by Natalie, Bel, and Hunter Adkins achieving the Overall Bench Show Champion. This adds to an impressive resume for the duo of Natalie and Wendy. A redbone male, CH ‘PR’ Wabash River Marlboro Red, owned and handled by Andi Emory pulled out the Opposite Sex title to put the exclamation mark on a successful weekend for the two.

I was lucky enough to get over to the show ring to see the youth show for Overall in the Youth Bench Show on Saturday evening. I know I may sound like a broken record at times, but the youth we have in the sport right now are quite impressive. The six handlers and hounds that showed for overall really made life hard on the judge, Wayne Steele. When all was said and done, Jordyn Brooks handling ‘PR’ Sideshow All American Chief took home the overall crown with the tag team of Kayde Wood and Haylie Rorvik taking home the reserve title with CCH GRCH ‘PR’ Stewarts Good Golly Miss Molly.

The hunt had very few hitches and that is a testament to David McKee and his team. It is not easy to put 250-plus hounds a night in the woods and they did it with ease. I would say everyone involved was very pleased with the turnout of the hunt and how few issues there were, even with the state restrictions changing a few of the procedures the board is used to. Most of the stories and feedback I received were positive and that is what we strive for. The weekend saw 485 hunt entries over the span of two nights dwindled down to four hounds to hunt for the title late Saturday night.

It was a cold night, probably around 30 degrees when I left the hotel room and headed to the fairgrounds around 1:30 a.m. to get ready for the final cast. My biggest internal dilemma at the time was whether to wear my waders or to just give in to the fact that I would be spending a lot of time in the water and wear my tennis shoes to make life easier. Waders ended up being the correct choice thankfully.

The cast took off from the fairgrounds around 3:15 a.m. and headed down the road about 20 minutes to a spot that hadn’t been touched all weekend. As we pulled into a field on the edge of a wood line, I was encouraged to see that we were positioned in some relatively high country for the area. As the hounds were collared and released into the woods, silence surrounded the cast.

It must have been a few minutes before a couple high-pitch squeals pierced through the night air directly in front of us. It took a couple of those before Chuck struck Chance in for 100. Mia was struck directly after for 75 followed by a deep long ball left-handed of those hounds by Frankie for 50. The cast backed out into the field to cut the distance on the struck hounds. Joe was struck in for a quarter a little right-handed of the other hounds by TJ. All the hounds were opening periodically when Frankie let out a couple coarse balls and David wasted no time putting him on the paper for 125. Frankie was a little unsure of that tree and kept locating in that general direction before the judges determined he had moved off his tree and minused his tree points.

Shortly thereafter, Mia gave a few shrill balls before settling into a steady chop as Chase exclaimed, “Mia treed!” After waiting on the edge of the woods, TJ and David decided to join in on the tree and call Joe and Frankie for a quarter each after two minutes on the tree had expired. The cast headed to the first tree of the night. As we got closer, two things were clear, dogs were moving, and we were going to have to cross a good-sized creek to get to the tree. Luckily, the cast was full of folks who are used to hunting water filled areas and we were able to navigate the deep water without getting soaked.

As we arrived at the tree, we realized Mia and Frankie had packed their bags and Joe was the only dog left on the tree. After a short time, the coon was found, and Joe was the first hound in the plus column with 50-plus. After scoring the tree, Chance was treed in 150 yards away and TJ elected to keep Joe on the leash. After crossing back over the creek, we made it to Chance’s tree for scoring. Squallers were ringing and vines were swinging as red and white lights filled the treetops, but no coon could be found. The tree was, however, wooly enough to secure circle points for Chuck and his hound.

An hour hunt can really go by fast in an action-packed cast and that was the case here. Joe and Chance had been released with just around 10 minutes of hunt time left. The cast was still wide open, and the tension was thick as we stood and waited for what might happen next. There was right around five minutes left in the cast when Mia came treed like she was looking at one about 600 yards away from the cast. Right on cue, Frankie fell treed about 400 yards away from the cast right afterwards and as time ran out, we had two trees to score with major placement implications.

Due to the area where the hounds were treed, Mendel took the cast members and headed across the swamp to score the final trees of the night. Shortly after getting back up to the truck, we received a call that both Frankie and Mia had their coons, meaning Mia had jumped to the front of the pack and secured Chase and Jerry the top spot of the 2021 Grand American coon hunt.

As always, it was a great group of dogs, handlers, judges and guides that made for a successful night in South Carolina. Congratulations to all the winners from this weekend!

Orangeburg County officially welcomes the Grand American Coon Hunt this weekend, a United Kennel Club-sanctioned event that is one of the top …

Roy Braddock of Walterboro is the best of the best among Grand American coon hunters.

US Soccer reaches equal pay agreement for men and women

US Soccer reaches equal pay agreement for men and women

The Final Four cast in the 2021 Grand American Coon Hunt, hosted by the Orangeburg County Fairgrounds.