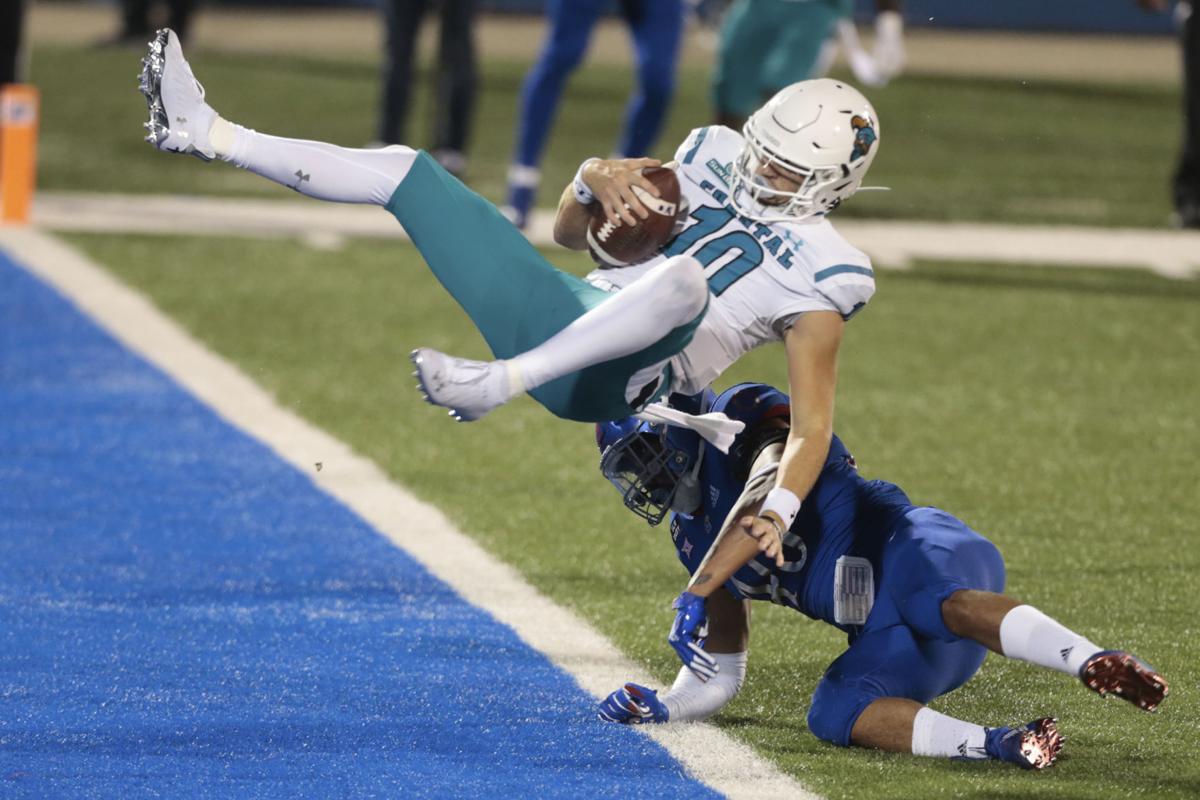 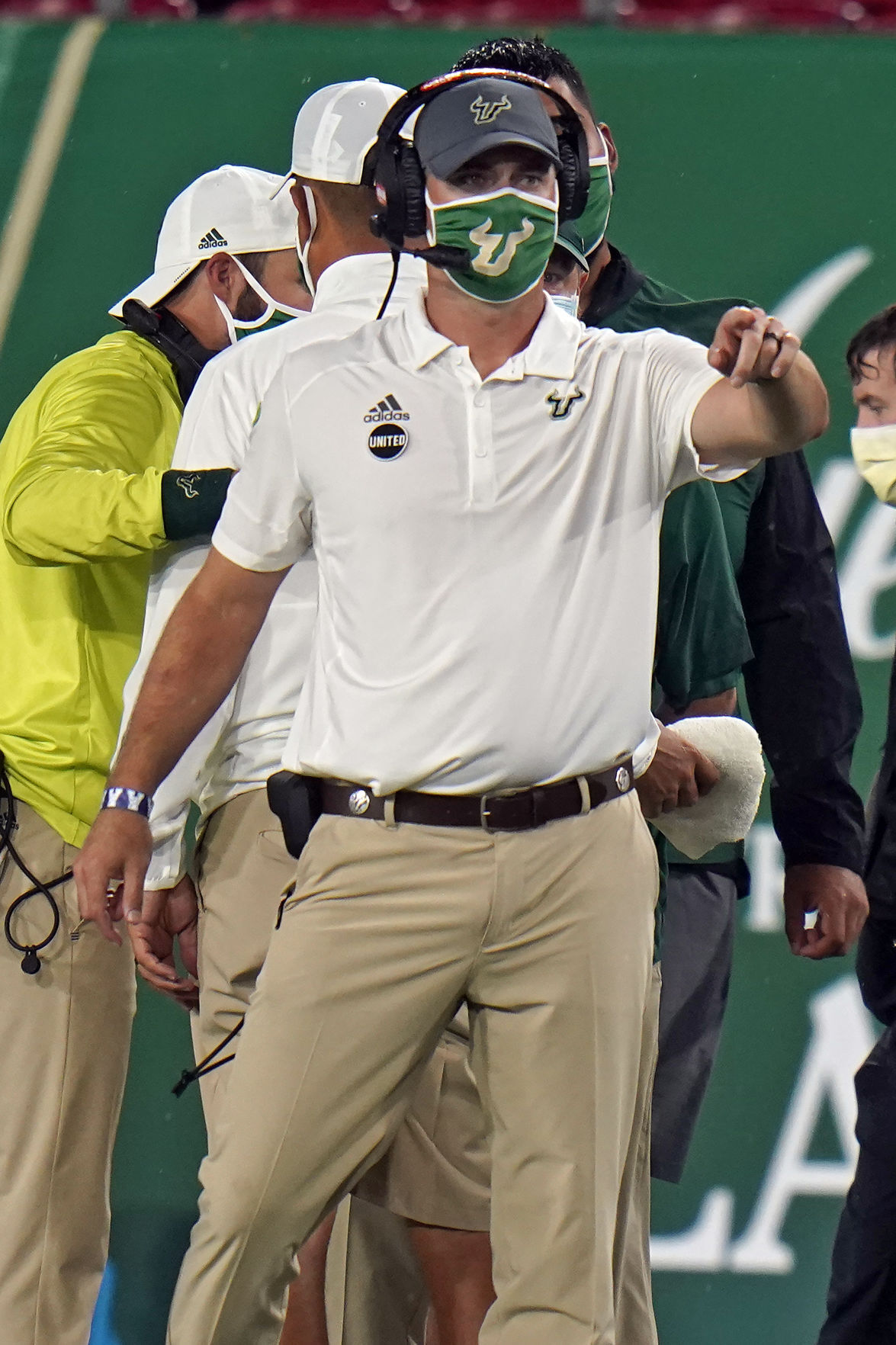 New South Florida head coach Jeff Scott, former Clemson offensive coordinator, shouts out instructions to his team during the first half vs. The Citadel on Saturday in Tampa, Fla.

LAWRENCE, Kan. — Coastal Carolina might want to start scheduling a trip to Kansas every season.

Grayson McCall threw three touchdown passes and ran for two more scores, the Chanticleers forced the Jayhawks into three early turnovers, and the coach Jamey Chadwell's bunch rolled to a 38-23 victory early Sunday. It was the second consecutive years that the young Football Bowl Subdivision program had won in Memorial Stadium.

"Great win for our program," Chadwell said. "Just proud of the effort."

He was proud of the Sun Belt, too. Louisiana bludgeoned No. 23 Iowa State and Arkansas State rallied to beat Kansas State earlier Saturday. By the time Coastal Carolina wrapped things up about 1 a.m. local time, its lightly regarded league was 3-0 against the mighty Big 12 with all the wins coming on the road.

"We didn't want to let the Sun Belt down," Chadwell said. "Hopefully people back on the East Coast were awake to see it."

There were no fans on hand for the Jayhawks' opener because of the coronavirus pandemic. Then again, considering they trailed 28-3 at halftime, there probably wouldn't have been many left under normal circumstances — and combined with the 9 p.m. kickoff due to television, it meant few people probably saw it.

Coastal Carolina plays its home opener Friday night against Campbell. The game was added less than a month ago to give the Chanticleers an 11-game schedule. The Fighting Camels lost to Georgia Southern earlier Saturday.

TAMPA, Fla. — Jordan McCloud threw for a touchdown, Noah Johnson ran for another, and South Florida beat The Citadel 27-6 on Saturday night to give Jeff Scott a win in his first game as a head coach.

Scott, who had served as Clemson's co-offensive coordinator and wide receivers coach since 2015, replaced the fired Charlie Strong in December 2019.

McCloud hit DeVontres Dukes for a 10-yard touchdown to make it 7-3 with 49 seconds left in the first quarter and USF (1-0) led the rest of the way.

Colby Kinter, who opened the scoring with a 45-yard field goal, made a 41-yarder to pull The Citadel (0-1) within a point with 11:08 left in the second quarter but Omarion Dollison recovered a botched punt for a touchdown before Johnson's 9-yard scoring run made it 20-3 at halftime.

McCloud and Johnson split time at quarterback for USF. McCloud was 11-of-16 passing for 68 yards, and Johnson completed 3 of 4 for 24 yards and had 49 yards rushing on seven carries.

Kelly Joiner added eight carries for 87 yards for the Bulls, including a 3-yard TD to cap the scoring midway through the fourth quarter.

Like college football coaches around the nation, Clemson's Dabo Swinney is always looking to build on his team's depth. That wasn't hard to do…

LAFAYETTE, La. — Massimo Biscardi made a 40-yard field goal with 4 seconds left to give Coastal Carolina a 30-27 victory over No. 21 Louisiana…

No. 25 Coastal Carolina plays for the first time ever as a ranked FBS team when it faces Georgia Southern on Saturday (noon, ESPNU).

CONWAY — Backup quarterback Fred Payton three three touchdown passes and No. 25 Coastal Carolina won its first game as a ranked team with a 28…

McCall, Heiligh lead No. 20 Chants to rout of Georgia State

ATLANTA — Coastal Carolina coach Jamey Chadwell could sense something special was about to unfold.

No. 15 Coastal Carolina chasing bigger stakes with each win

No. 15 Coastal Carolina has already reached a couple of major landmarks this football season. Now, the Chanticleers could be eyeing another mi…

CONWAY — Coastal Carolina has come a long way in a short amount of time.

New South Florida head coach Jeff Scott, former Clemson offensive coordinator, shouts out instructions to his team during the first half vs. The Citadel on Saturday in Tampa, Fla.