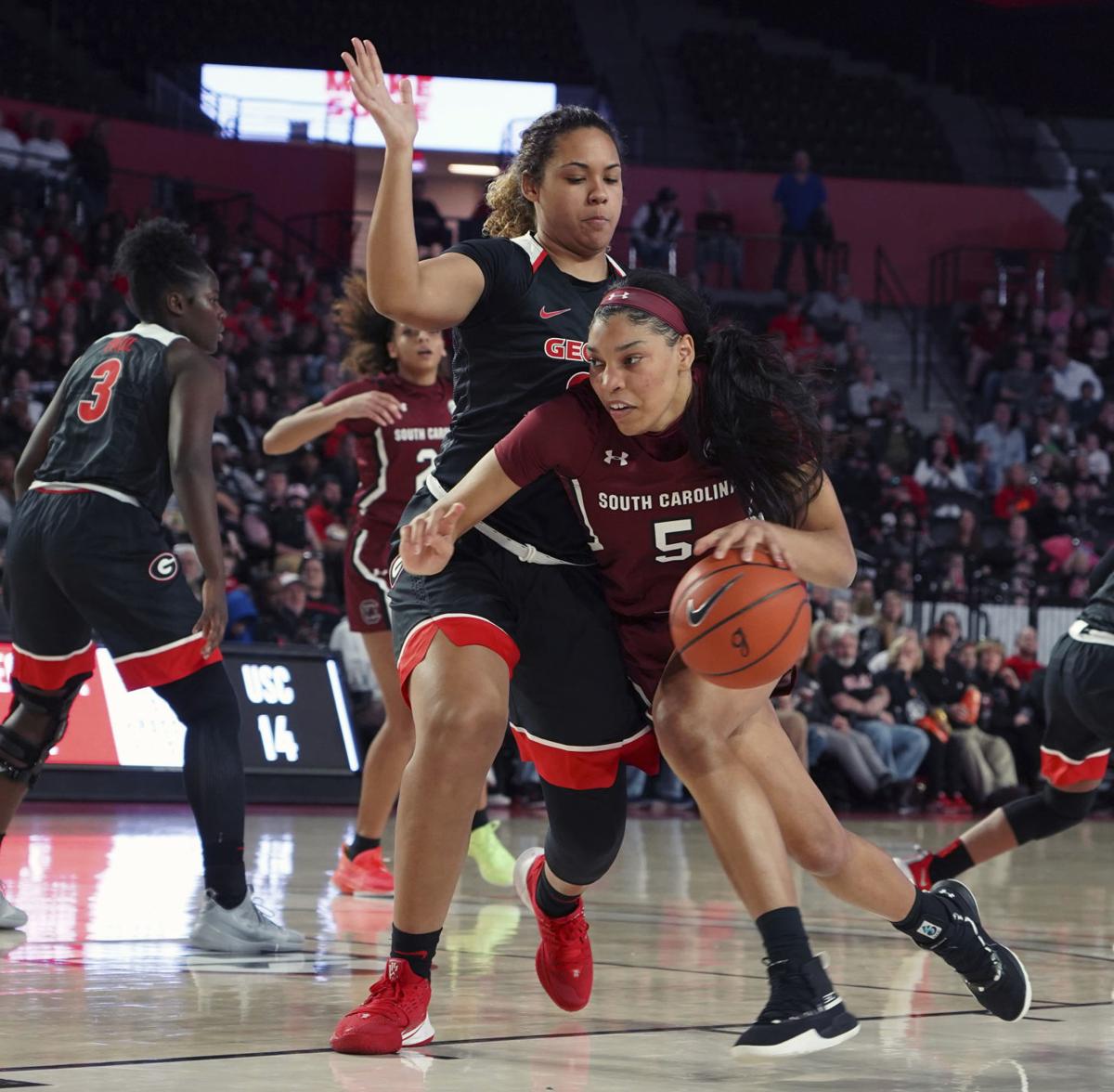 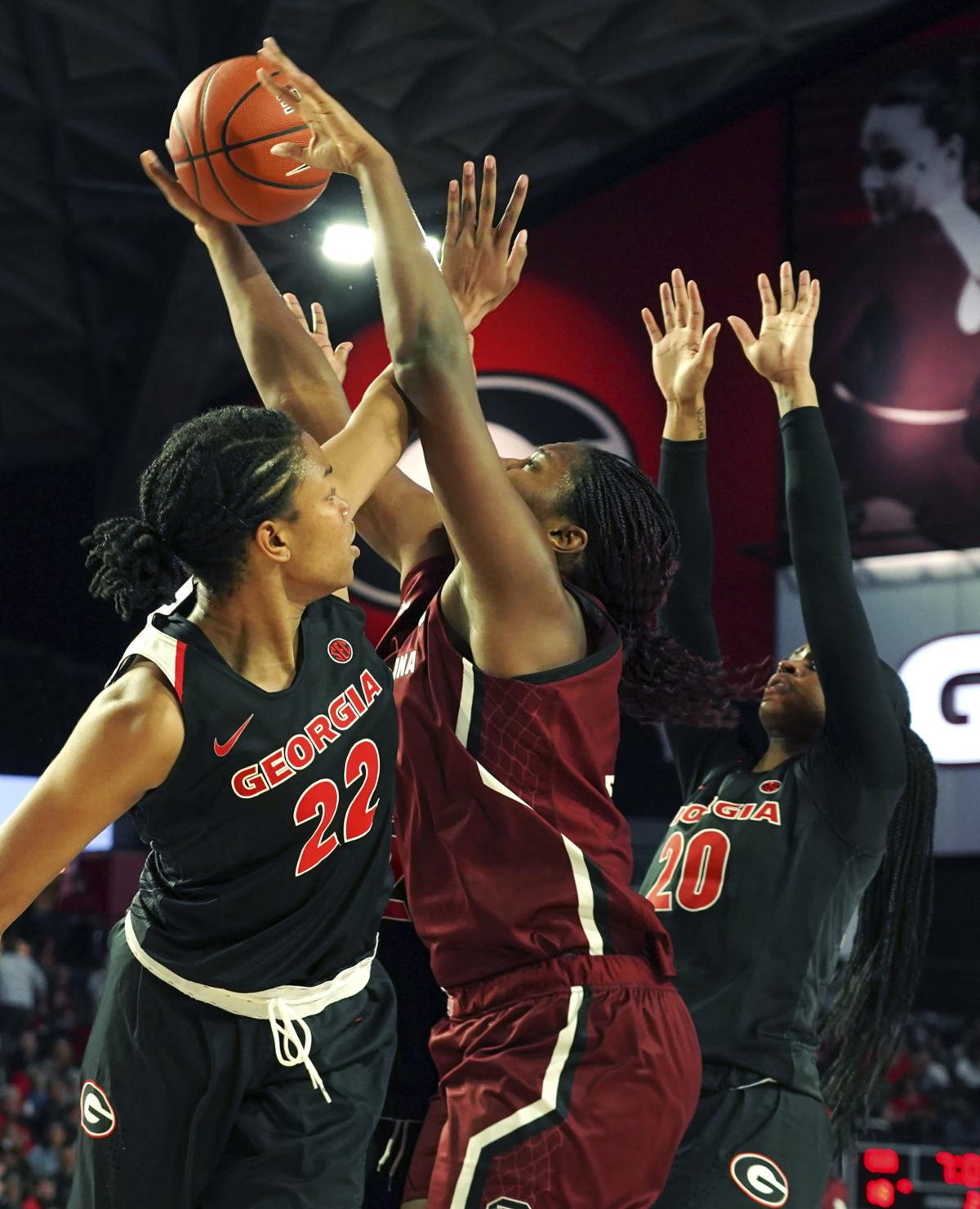 ATHENS, Ga. — Tyasha Harris is realizing the value of her scoring even as she has claimed a new title as South Carolina's career assists leader.

South Carolina continues to put in work as top-ranked team

"It's a great record to get," Harris said. "I always like passing the ball. That's what I pride myself on. A little bit too much, I guess you could say, sometime. But it's great."

Coach Dawn Staley said Harris "is in a really good place now" as a scorer and floor leader.

"She sees how much better we are when she is aggressive shooting the ball, attacking the basket and getting her teammates involved," Staley said. "I think she's found a happy medium with both and it's elevated our team."

After Georgia's Jenna Staiti scored the game's first points, Harris had seven points in the Gamecocks' 14-0 run that left the Lady Bulldogs with double-digit deficits the remainder of the game.

"You can't let a team like South Carolina get up on you like that, 28-8 in the first," said Georgia coach Joni Taylor. "They're just too good offensively to be able to stop them and dig yourselves out of that hole."

Harris sank a 3-pointer and added another jumper as the bookend baskets of the run.

South Carolina had seven steals while stretching the lead to 20 points in the opening period. Many of the forced turnovers followed Georgia's ill-fated attempts to pass the ball inside. The Lady Bulldogs made only 3 of 13 shots from the field in the deflating opening period.

Gabby Connally's third 3-pointer of the second period helped Georgia trim the South Carolina lead to 13 points at 34-21. The Gamecocks stretched the lead to 26 points in the third period.

Connally had 11 points and nine assists.

South Carolina: After surviving their first real SEC challenge in Monday's 81-79 win over No. 9 Mississippi State, the Gamecocks returned to their dominant form with their sixth conference win of at least nine points. ... The Gamecocks, No. 1 in the nation with 8.3 blocked shots per game, had nine blocks.

Georgia: The Lady Bulldogs have lost 11 straight in the series with South Carolina. Georgia's last win in the series came on January 13, 2013. ... Five of Georgia's eight losses have come against teams currently in the Top 25. ... Georgia outscored South Carolina 22-19 in the second period but couldn't mount a serious challenge to the lead. ... Que Morrison and Malury Bates fouled out.

A loss for women's basketball

Both coaches mourned NBA legend Kobe Bryant's death on Sunday as a loss for women's basketball. Bryant was a supporter of the college game and the WNBA as well as his daughters as players. "Kobe, since he retired, he dedicated his life to his little girls and her career in basketball," Staley said. "It's unfortunate we don't get a chance to see him coach anymore or impact girls lives. He just talked about WNBA players being able to play in the NBA. We need more people like Kobe Bryant sticking up for women's basketball."

Taylor said Bryant "supported college basketball, the WNBA, all levels. He was a champion for us."

Both coaches waited until after the game to tell their players about Bryant's death.

"Honestly, you just have to look at it like life is too short," said Georgia's Shaniya Jones, who shed tears when talking about Bryant. "... No one knows when it's their time."

South Carolina had a 20-9 advantage in fast-break points. The key, Staley said, was "Speed. Just our ability to rebound and push the ball down the floor." Staley said Harris, who had only one turnover, was the "floor general, leading the charge."

Georgia will face its third straight Top 25 team when it plays at No. 15 Texas A&M on Thursday.

CAROLINA BASKETBALL: Freshmen lead No. 4 South Carolina past No. 13 Kentucky

COLUMBIA — South Carolina coach Dawn Staley is trying not to get ahead of herself.

CLEMSON — Tevin Mack had a career-high 32 points and Clyde Trapp hit a go-ahead driving layup with 2.5 seconds left as Clemson rallied from 10…

COLUMBIA — Dawn Staley has accomplished many things in her 12 seasons as coach at South Carolina. Beating UConn, the game's most dominant prog…