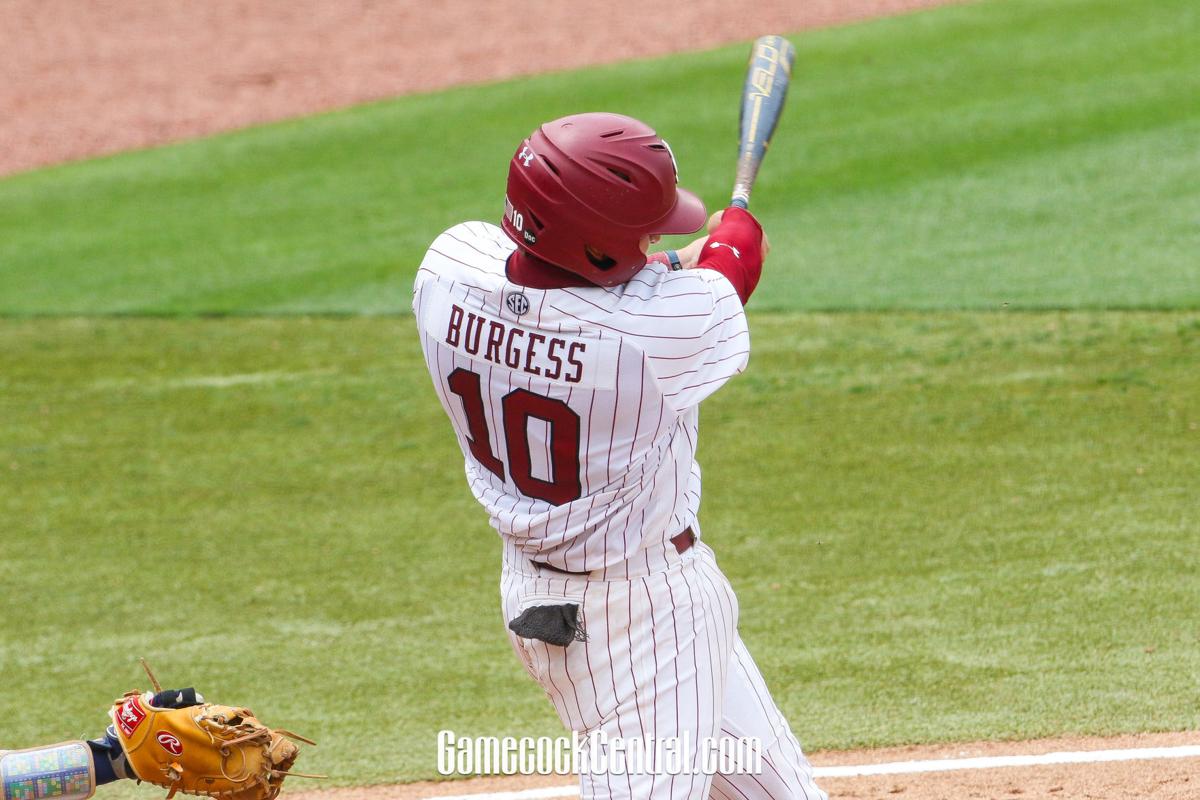 Colin Burgess ripped a 3-1 single through the left side to break the tie in the sixth inning. 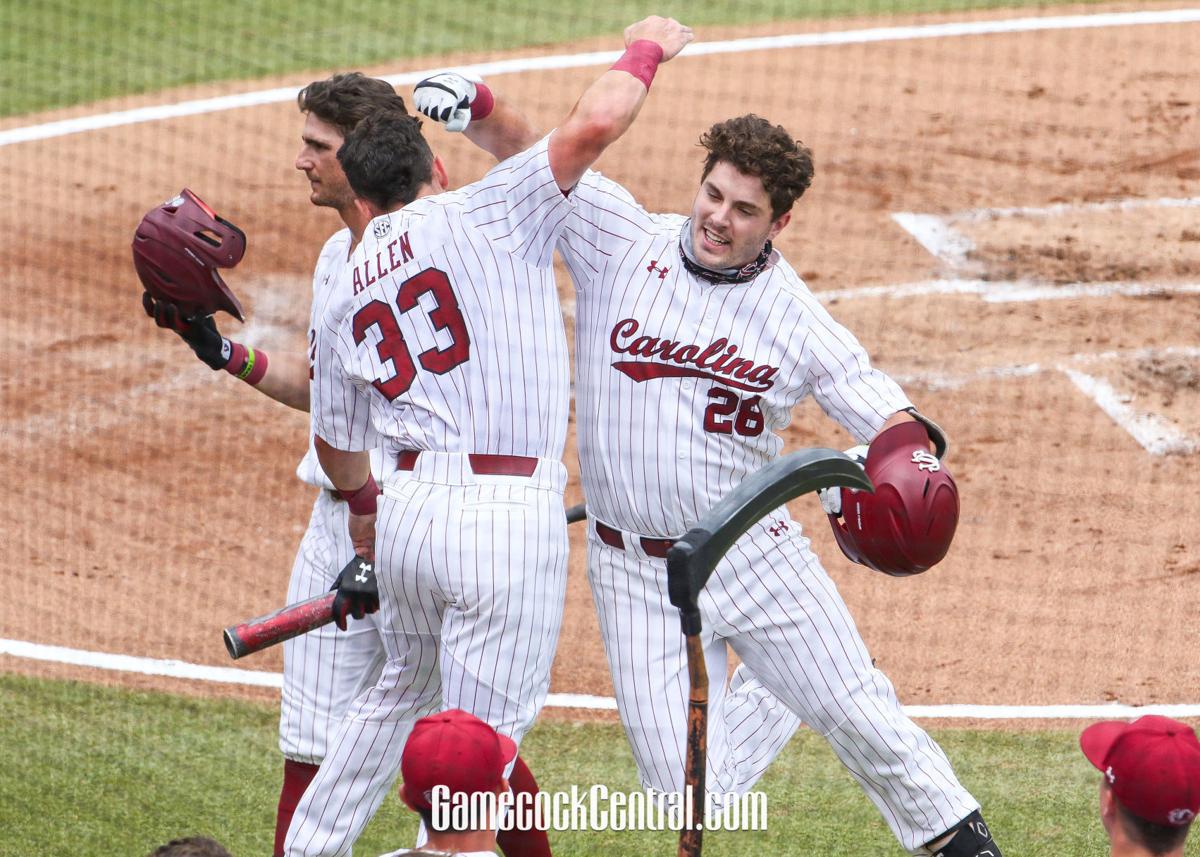 The Gamecocks took a lead early on a first-inning homer from Wes Clarke — his nation-leading 23rd of the season.

COLUMBIA -- When Josiah Sightler dug in for his at-bat in the sixth with the tying run on second base, he found himself down 0-1 after the first pitch.

Virginia starter and all-ACC arm Andrew Abbott blew a fastball by him, and Sightler vowed to not let another one get by him.

So when Abbott hung a breaking ball at the hands, Sightler didn’t miss, delivering a game-tying double to spark the Gamecocks in ultimately beating Virginia 4-3 Friday in a regional opener.

“When you’re in high school and commit to a university, that’s one thing you take into consideration,” Sightler said. “Playing in a regional with thousands of fans behind you and rooting you on. For it to happen the way it did today was awesome.”

CAROLINA BASEBALL: Gamecocks have 'arms to get to Omaha'

Sightler — experiencing his first-ever regional despite growing up in South Carolina — etched himself into recent Gamecock history with his double, which sparked a three-run inning.

Sightler’s double ended Abbott’s outing and he eventually came around to score after Colin Burgess ripped a 3-1 single through the left side to break the tie.

“It was the biggest hit of the game. Sightler’s one of our leaders. He’s one of our character guys,” head coach Mark Kingston said. “He bleeds Gamecocks and he’s worked really hard to put himself in this position. It’s taken him a long time to get to the point where we can use him in our lineup as a starting player, but he put in the time and he’s getting rewarded for all that hard work.”

After the Gamecocks took a lead early on a first-inning homer from Wes Clarke — his nation-leading 23rd of the season — things looked a little dire for South Carolina through the first five innings.

Brett Kerry gave up two runs in the third on solo homers before leaving the game the same inning with neck stiffness, pressing Julian Bosnic into service sooner than South Carolina would have liked.

Bosnic gave up a run in the fourth on an infield single but settled down as part of a elite bullpen outing after Kerry left in the third.

South Carolina’s bullpen pitched a shutout the final five innings of the game, keeping things within striking distance for the offensive heroics in the sixth.

George Callil started the inning drawing a full-count walk over Abbott before Clarke cranked a two-out ground-rule double to right-center field and setting the stage for Sightler and Burgess.

“Based on the stage is how important those seem,” Kingston said. “Today obviously scoring those runs with two outs felt very important and felt very impactful.”

Once they took the lead, the Gamecocks turned to Daniel Lloyd, who dominated his way to his second save of the season.

Lloyd gave up a lead-off single on his first pitch of the day before retiring nine straight to end the game.

He struck out four, including punching out the side to end the game in the ninth while letting out a guttural scream as he and his teammates celebrated the first postseason win at Founders Park since 2016.

“In terms of the environment and to his team, it was obviously the biggest stage and biggest outs he’s gotten in those circumstances,” Kingston said. “He’s pitched some big games for us but in terms of a regional opener and giving us three innings and no earned runs, under the circumstances this was his biggest outing.”

The Gamecocks now play in the winner’s bracket game against either Old Dominion or Jacksonville with first pitch scheduled for 7 p.m. Saturday night.

“Farr’s had a really good season for us. He’s been better as of late,” Kingston said. “Him getting last week off will rejuvenate him and we’re hoping to see the Farr we saw early in the season when he was very good.”

Detroit Lions embrace being underdogs in 2021

What will it take for the Giants to take down the Dodgers?

What will it take for the Giants to take down the Dodgers?

What impacted the line move on the Dodgers?

What impacted the line move on the Dodgers?

COLUMBIA — Zack Gelof and Kyle Teel had four hits each, Jake Gelof and Chris Newell homered, and Virginia beat Jacksonville 13-8 in a Columbia…

COLUMBIA — Tommy Bell walked on a 3-2 pitch from Thomas Farr with the bases loaded and two outs in the top of the eighth inning and No. 11 ove…

Colin Burgess ripped a 3-1 single through the left side to break the tie in the sixth inning.

The Gamecocks took a lead early on a first-inning homer from Wes Clarke — his nation-leading 23rd of the season.