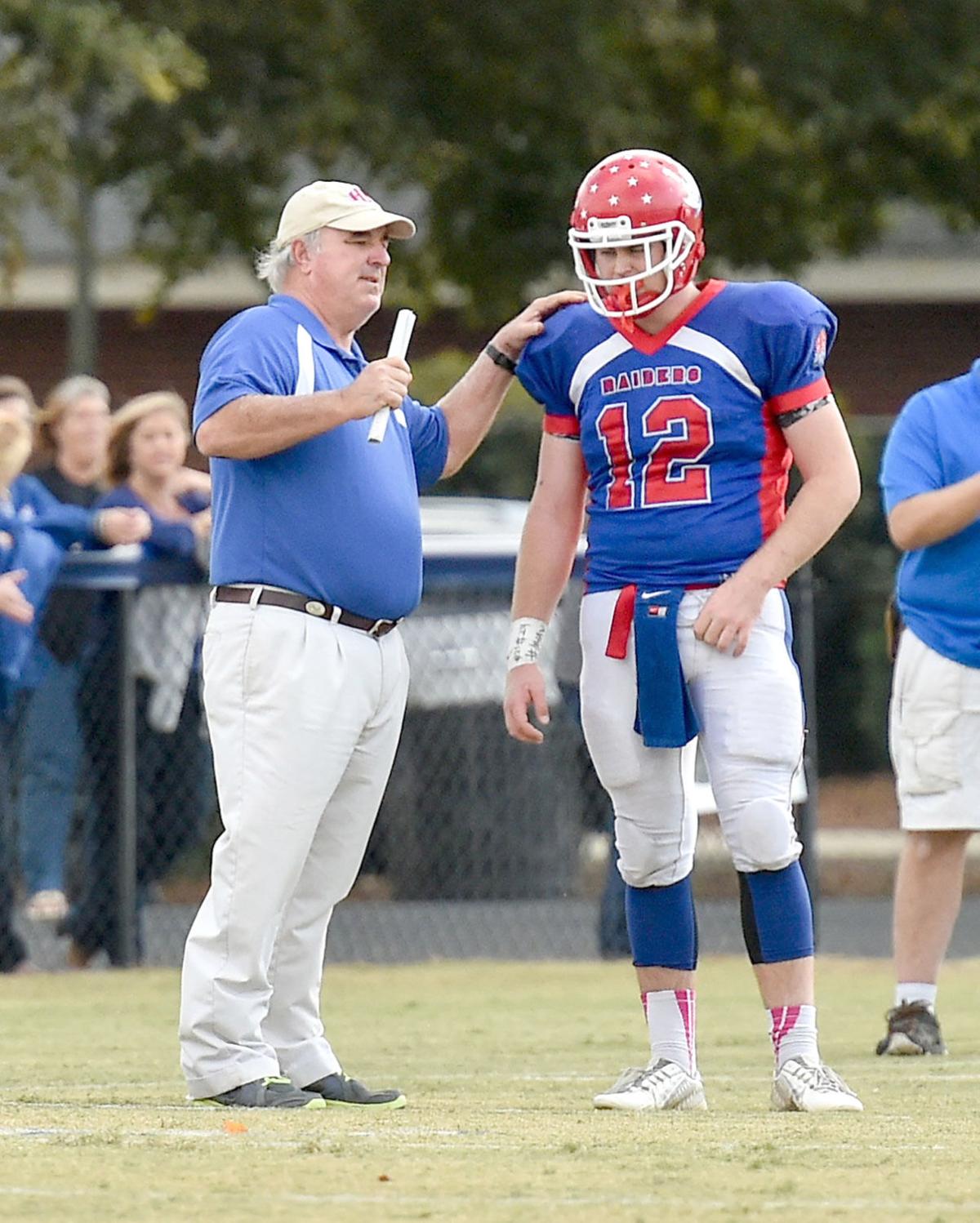 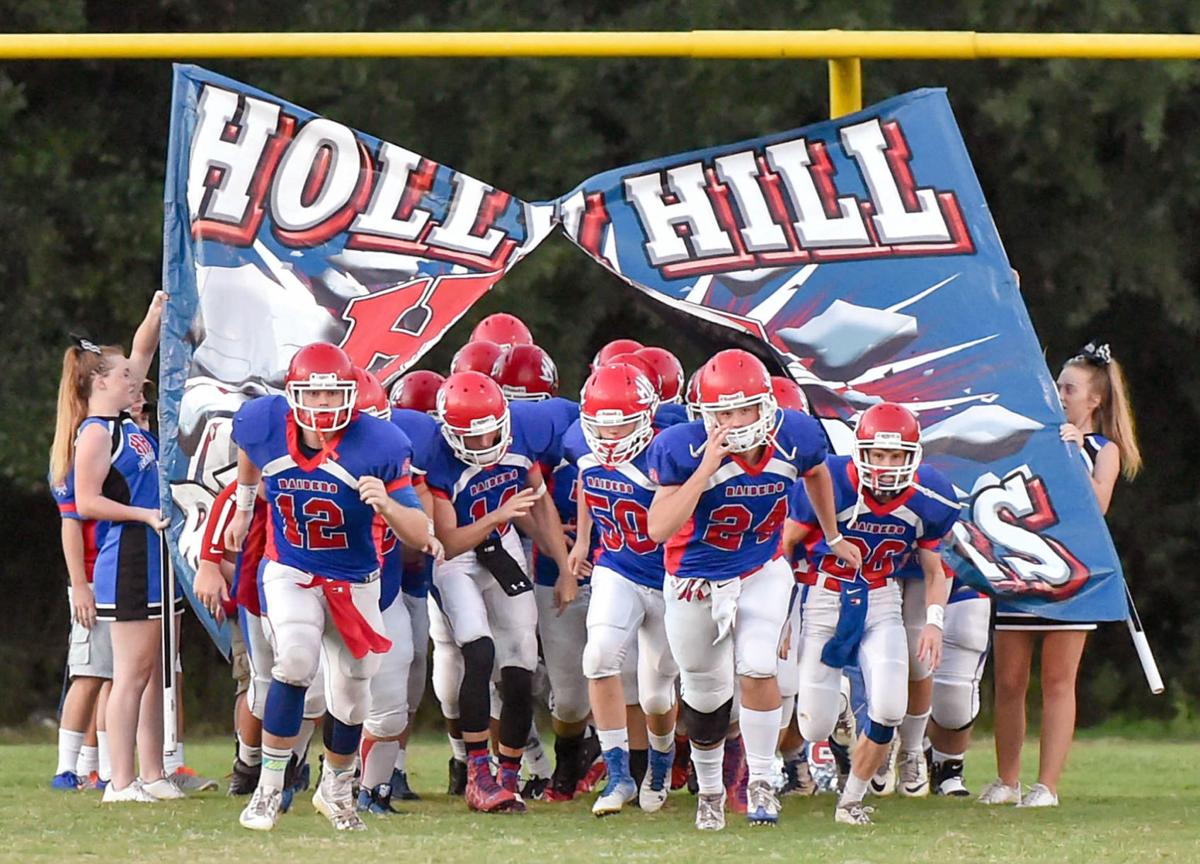 It has been echoed in poems and songs through the years, the consideration of bringing someone flowers or in some way honoring them while they are still around and thriving.

The idea is to not wait to cut flowers for, present gifts to or in some way honor a person only after they are gone.

With that thought in mind, Holly Hill Academy announced at the Raiders athletic banquet this past Tuesday that the HHA football field will be named Don Shelley Field, in honor of the head coach entering his 12th season leading the Raiders football program (his 32nd season as a head coach in Orangeburg County).

Bryan Dantzler, a member of the HHA Board of Directors, said this honor was something the board decided should be done while Shelley is still coaching a program that is a perennial state championship contender.

“It’s something we wanted to do for him, for all he does for the kids at our school and for the state championships his teams have won,” said Dantzler, who was a Raiders quarterback who was coached in an all-star game by Shelley when the coach was at Orangeburg Prep. “He is not big on this kind of stuff, and he doesn’t have much to say about himself.

“But Coach Shelley deserves this honor.”

Plans are to have a Don Shelley Field sign made and a dedication ceremony held for the newly-named field prior to kickoff of the 2017 Raiders football season.

His first OPS team in 1987 won the SCISA 3A title. In fact, with Shelley at the helm, the Indians played for eight state titles their first nine years as a program, winning six championships in that span.

So on Tuesday night, as current HHA student-athletes were arriving for the annual athletic banquet, Shelley realized something unusual was taking place and he got suspicious. Not only were current football players showing up, but so were players he coached more than a decade ago at Orangeburg Prep.

“He is a very humble man, and that’s why we had to surprise him,” HHA headmaster Garland Crump said. “Everybody wants to play for a winner, and Coach Shelley is a winner.

“He is one of the best coaches I have ever observed preparing a team to play. He works hard at preparation. It shows with how the kids perform on the field. He can take an average athlete and get the most out of them. He has had a tremendous impact on our school, with his primary impact on the lives of those he has coached and taught here. He gives so much back to our school and is an excellent teacher in the classroom. It is very fitting to name the field in his honor.”

Shelley also coaches golf and teaches high school social studies at HHA. Those positions require his attention for major parts of each year. However, the field being named after him is a place he spends time working throughout the year.

“That field is his baby, his garden,” Crump said. “He takes meticulous care of the field.

“Our field is one of the most well-maintained in all of SCISA.”

Not surprisingly, the day after the field dedication was announced, Coach Shelley was right back in his element, coaching day one of spring workouts for the Raiders football team.

“That’s my therapy (mowing and maintaining the football field),” Shelley said. “I’d rather be out there mowing and getting a lot of thinking done most days.

“But, this all is about the boys. If we hadn’t had some success here with the football program, they wouldn’t be putting my name on anything. But we have had that because of good kids and good players. It’s a long list of young men who have contributed to this success. I’m honored by this. But, it made me feel better to look in the back of the room (Tuesday) and see young men who came through Holly Hill and OP. I was more honored by that, seeing them and the men they have grown to become.”

Shelley’s commitment to teaching young men how to properly prepare for and play the sport they love is a major reason HHA has played in a state title game in two of the past three seasons. Those accomplishments were reached on opposite sides of the Raiders football program being moved from the South Carolina Independent School Association Class A ranks to the 8-man ranks prior to the 2016 season.

The program had to adjust and make the move back to 8-man this past season. But, Shelley didn’t have any great concern. He and his coaching staff just rolled with the punches and prepared the Raiders players for success.

“I don’t think much has changed with Don or his coaching; he does most of the same stuff the same way he always has,” said 11-year Shelley assistant coach Troy Troutman, who also played at HHA and as an all-star for Shelley. “He sees it like an engine that’s running, if it ain’t broke, don’t fix it.

“That’s how he coaches; if he can get five or six yards a carry, why throw the ball? If you’re moving the ball and scoring points, that’s what’s important. Fans want to see teams air it out, throw it. But he doesn’t care what other people think. He made that clear in his first coaches meeting here and that hasn’t’ changed. And that’s his field, basically, before we even put his name on it. I helped with three other head coaches here before him, and it was like pulling teeth to get someone to mow the field. Now we have it done right and have irrigation and the right equipment; Don pushed for that.”

Troutman joked that the lawnmower should be named after Shelley too, since he mows the field all spring and summer. But, that’s not the extent of the head coach’s preparations for games. Shelley lines the field and with the help of his wife he puts the school symbol at midfield, getting things right for both junior varsity and varsity games each week during the season.

Shelley has been an active advocate of improving surroundings for the athletic program at HHA.

And Troutman recalls Shelley being just as proud of a previous HHA team for making a strong comeback in a loss at then-Byrnes Academy (now Trinity-Byrnes) as he was of the 2014 state title squad.

But Shelley is quick to point out that the main focus of coaching is not piling up wins or avoiding losses.

“It’s all about having an effect on the young people’s lives,” Shelley said. “Winning football games are important on Friday night, but that’s not the main purpose of high school athletics.

“Building the family and relationships is what it’s all about. It’s teaching young boys to become men.”

That's the challenge that brought the Marion County native to Orangeburg County more than three decades ago.

The only recent change in that scenario is that now young boys at HHA will learn more about football and life from the SCISA coaching legend while practicing and playing on Don Shelley Field.