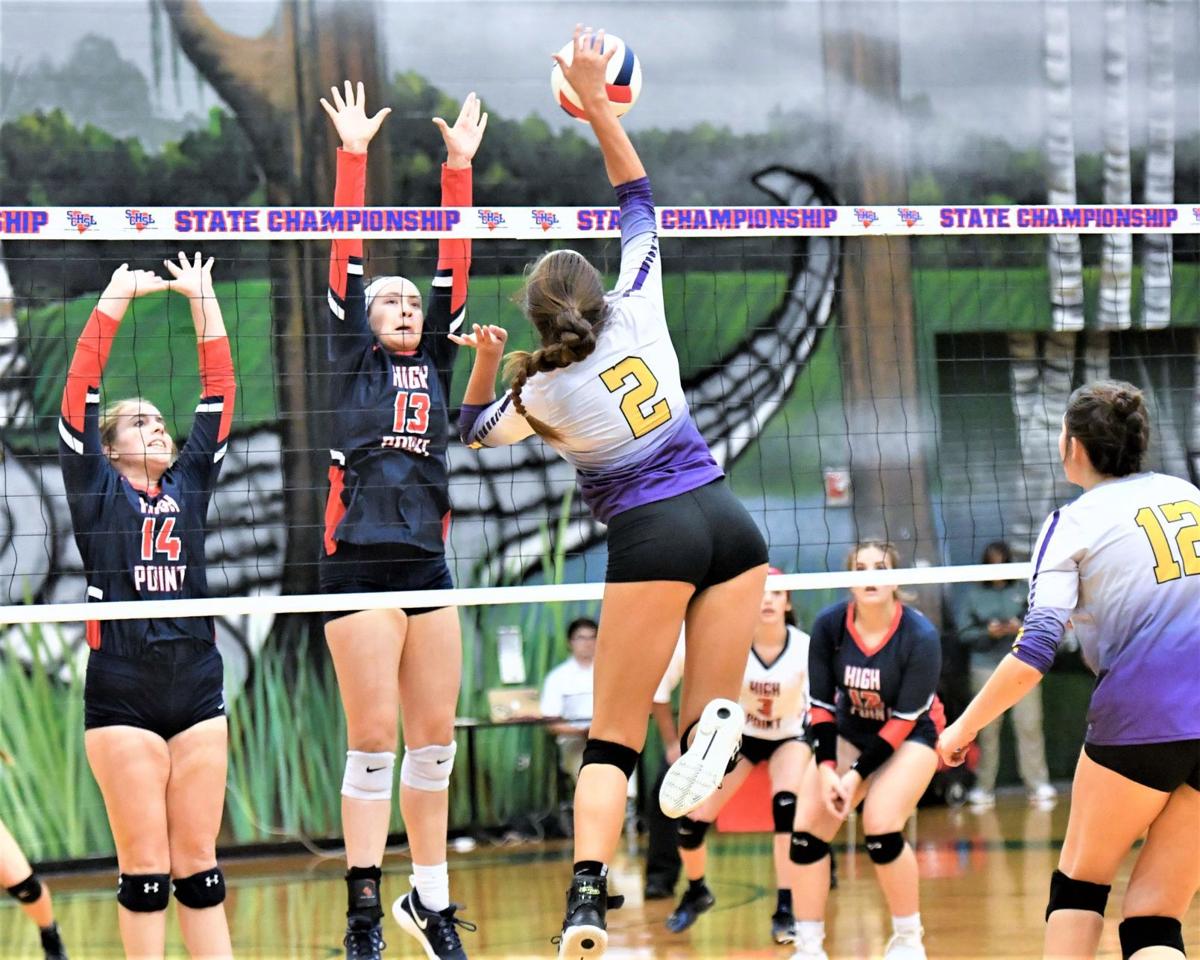 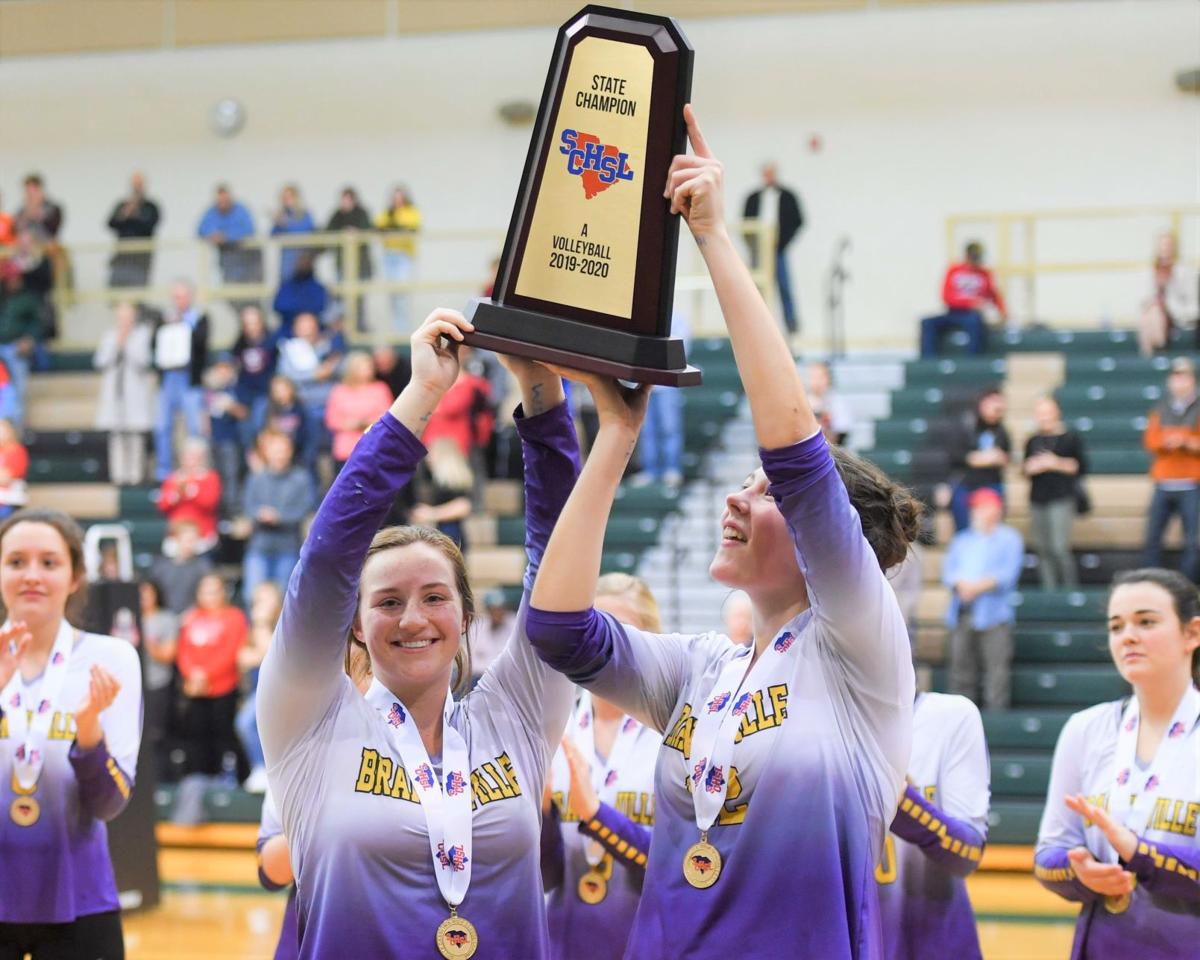 Branchville volleyball seniors Abby Funchess and Kelsey Kinard hold up the SCHSL Class A title trophy on Saturday, after the Yellow Jackets won the program's first championship since 2016.

After two seasons of reaching the South Carolina High School League Class A volleyball state championship match and falling short of a victory, Branchville made sure it finished this postseason with a title and a trophy.

On Saturday, the Yellow Jackets won in straight sets to capture the Class A hardware 3-0 against High Point Academy (15-3 final record) from Spartanburg.

"We've really been tested this year, playing that tough (non-region) schedule, and the maturity of our seniors and our juniors really carried us," Branchville head coach Ron Nester said. "We won it three years ago and the last two years we weren't quite there.

"Today, there was no question, no doubting our girls. They went out there ready to play our system, like a well-oiled machine, getting it done. That Lower State championship win at Lake View prepared us, because we lost the third set, and our girls decided that wasn't happening again. Our motto today was 'dominate every point.' Having the hitters we have and the best offense we've had in a while, that showed today."

"The season was really challenging, and that set us up for this exact moment," Funchess said. "We challenged ourselves against bigger, maybe better schools (in non-region play), and we almost came out on top against a lot of those schools.

"It just built us and brought us together. This season has been, I mean it's my last (high school) season, so it's been a season like no other. This team, in my opinion, deserves all this, because they've put in so much work, in the summer and the last few months. It's been a long ride and we finished out on top. Experience set us up for this accomplishment."

Branchville has now played in 9 of the past 10 Class A state championship matches.

HPA scored the first point of the opening set, but it was the last time the Grizzlies led in the first frame. Kelsey Kinard had 3 kills in the early portion of the set, helping the Yellow Jackets get a 9-6 lead. An ace from Hess  increased the lead to 13-8, in the midst of a 5-0 scoring run that left Branchville leading 15-8. A Wiles kill made it 23-13 and got the serve back for the Yellow Jackets, who finished the set with a bump return from Hess for the 25-15 final.

"It was a blessing that everyone had their own little role on our team, but we came together as a team and did what needed to be done," Kelsey Kinard said. "We knew we could do it, so we just went for it and believed in ourselves."

In the second set, the lead shifted back and forth early, with the Grizzlies leading 7-5 after three straight Branchville miscues on either returns or serves. But, back-to-back kills by Carley Kinard tied the score at 8-8. A block kill from Kelsey Kinard gave the Yellow Jackets a 12-11 lead, starting a 7-2 scoring run that included an ace from Wiles and several return errors from HPA. Branchville led 18-13 and kept the lead with two consecutive aces from Hess and a late kill and back-to-back aces from Carley Kinard to secure the 25-19 win.

"We kind of battled with our serves a little bit this season, and that second set we battled some at the beginning," Funchess said. "But, other than that, you couldn't ask for anything more.

"We calmed our nerves and let the chips fall where they landed, the ball fall to whichever hitter and we got it done."

Branchville pulled ahead in the third set with help from a push return to the back row for a point from Funchess, and an ace from Hess to secure an 11-6 lead. Return miscues from HPA led to back-to-back points for the Yellow Jackets, along with a follow-up timeout by the Grizzlies, with the score 15-8 in favor of Branchville. Kelsey Kinard and Banks each had a late kill to increase the lead to 19-10. Kelsey Kinard delivered a later dink for a point and a service ace, accompanied by a return for a point by fellow senior Ebony Butler, making the score 23-14. After a net violation and a successful dink for a point, HPA returned the ball wide to end the set and the match and Branchville's successful run to win another trophy.

The Yellow Jackets had five seniors (Ashley Wright, Funchess, Kelsey Kinard, Butler and Jenna Ott), compared to just two seniors on the roster of the Grizzlies.

High Point Academy, which won the Upper State title by eliminating the Governor's School for Science and Mathematics, was led at the net by the steady play of one of its two seniors, middle blocker Taniah Wilkins. The GSSM program won the Class A title a season ago, over Branchville.

COLUMBIA — The Bamberg-Ehrhardt volleyball team finished the best season in program history on Saturday, in the SCHSL Class A state championsh…

Branchville volleyball seniors Abby Funchess and Kelsey Kinard hold up the SCHSL Class A title trophy on Saturday, after the Yellow Jackets won the program's first championship since 2016.