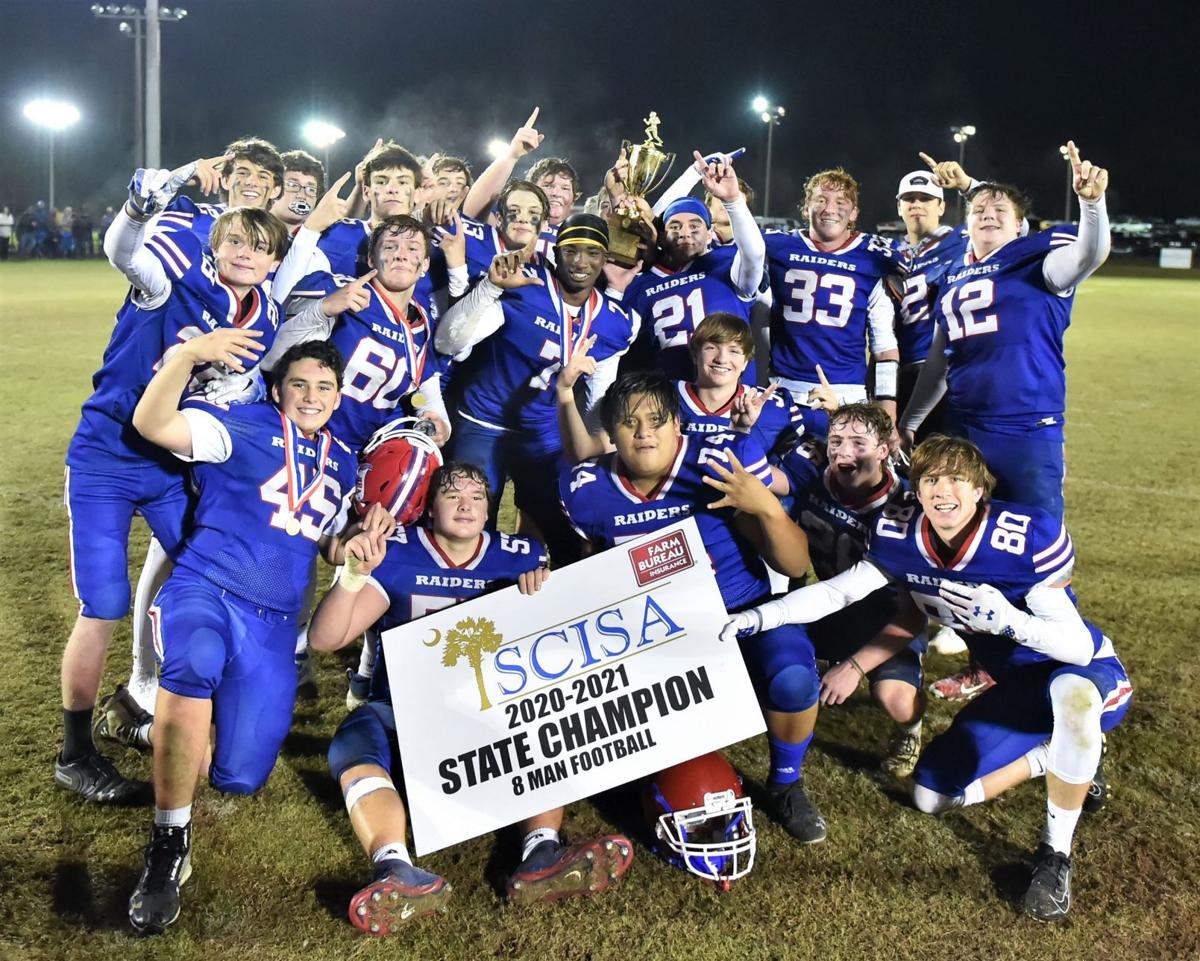 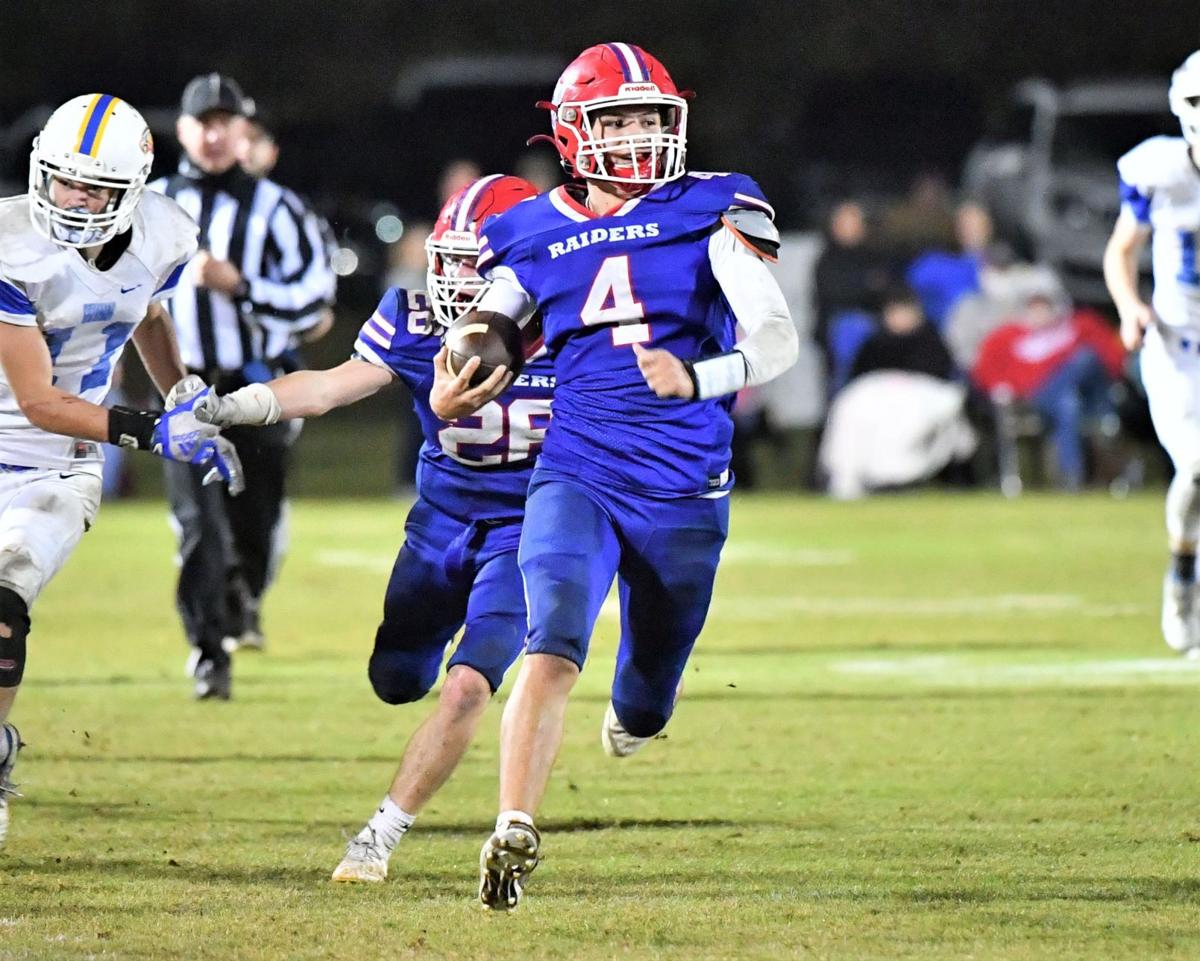 “We worked so hard this year, and I’m just so proud of them and our staff; We just put so many hours into work and preparation, film study, and on the field; I’m just so proud of these kids,” said Michael Nelson, Holly Hill Academy first-year head coach. “They deserve every ounce of this, and the good thing is we’ve got a large percentage of our team coming back next year, and I fully expect us to be back here.

"But, these seniors, undefeated season, second time in school history. I’m so glad that we were able to send them out in this fashion.”

Nelson said the season and the state championship is a testament to the hard work of his team and his staff. This was Nelson’s inaugural season as the head coach of the team, but his staff was familiar with the players and their abilities.

“It’s unbelievable; We started at the bottom and we worked our way here," Nelson said. "(Recent Raiders coach) Tommy Breland, he should get a lot more credit than what he’s getting.

"I mean, he started this thing. These coaches have been with these kids since JV year. I stepped in, and I’m a small piece of this puzzle.”

The Raider rushing attack was the focal point of the offense all season, and it carried Holly Hill Academy to a blowout win on Friday night. HHA ran the ball 57 times for 474 total yards.

The Raiders were the first to score, reaching the end zone on a 16-yard rush by Crawford Thomas at the 8:55 mark of the opening quarter. The 2-point conversion was no good, making the score 6-0.

The Eagles responded with a score with just over a minute left in the first quarter, on a two-yard rush by B Baker. Zack Taylor connected with Dru Caldwell for the 2-point conversion, giving the Eagles an 8-6 lead.

Zach Pelloni scored the Raiders’ next touchdown at the 10:12 mark of the second quarter. After carrying the ball five times, Pelloni’s sixth carry resulted in a 7-yard score. Pelloni rushed for the 2-point conversion, making the score 14-8.

Marion Breland scored on a 60-yard run with 4:25 left in the first half, increasing the Raiders’ lead. The 2-point conversion was no good, making the score 20-8.

Breland found the end zone again, scoring the first points of the second half on a 21-yard run. The 2-point conversion was no good, making the score 26-8.

Richard Winn Academy answered with a quick, four-play drive completed with a Taylor-to-Derek-Branham connection. The 2-point conversion was no good, leaving the score 26-14.

On the next drive, Pelloni carried the ball two times, covering 50 yards for a score. Breland rushed for the 2-point conversion, making the score 34-14.

Breland found the end zone on defense next, intercepting a pass at the two-yard line and returning it 98 yards for a score. Crawford rushed for the 2-point conversion, extending the Raiders’ lead to 42-14.

Pelloni found the end zone again, capping off a five-play drive with a rushing score from three yards out. Tyler Wright rushed for the 2-point conversion, making the score 50-14.

Breland connected with his brother Perrin Breland for a 26-yard passing touchdown with 2:44 left in the game. The 2-point conversion was no good.

Pelloni and Marion Breland accounted for the majority of the HHA offensive production the entire season. Nelson stated that both players rushed for more than 1,000 yards this year.

Friday’s game was indicative of the season the two players had, as Pelloni rushed for 207 yards and three scores on 25 carries, and Marion Breland rushed for 158 yards and two scores on 14 carries.

Marion Breland also was 4-for-4 passing for 71 yards and a touchdown.

The Raiders were led on defense by Perrin Breland with 13 tackles, Marion Breland with 11 tackles, an interception return for a touchdown, Harley Watkins with 8 tackles, Davin Walling with 6 tackles, and Jackson Canaday with 4 tackles, including a quarterback sack.

Both Holly Hill Academy and Richard Winn Academy took wins against defending state champion Andrew Jackson Academy this season, as the only teams to get wins against the Warriors. It was fitting that the two met for the championship. And thanks to the determined play of the Raiders, the trophy is now in Holly Hill.

Look to the Chargers and Seahawks to make the playoffs

The Bridge Builders Excellence Award is given annually by the S.C. Football Hall of Fame to the high school athlete who is most exemplary on a…