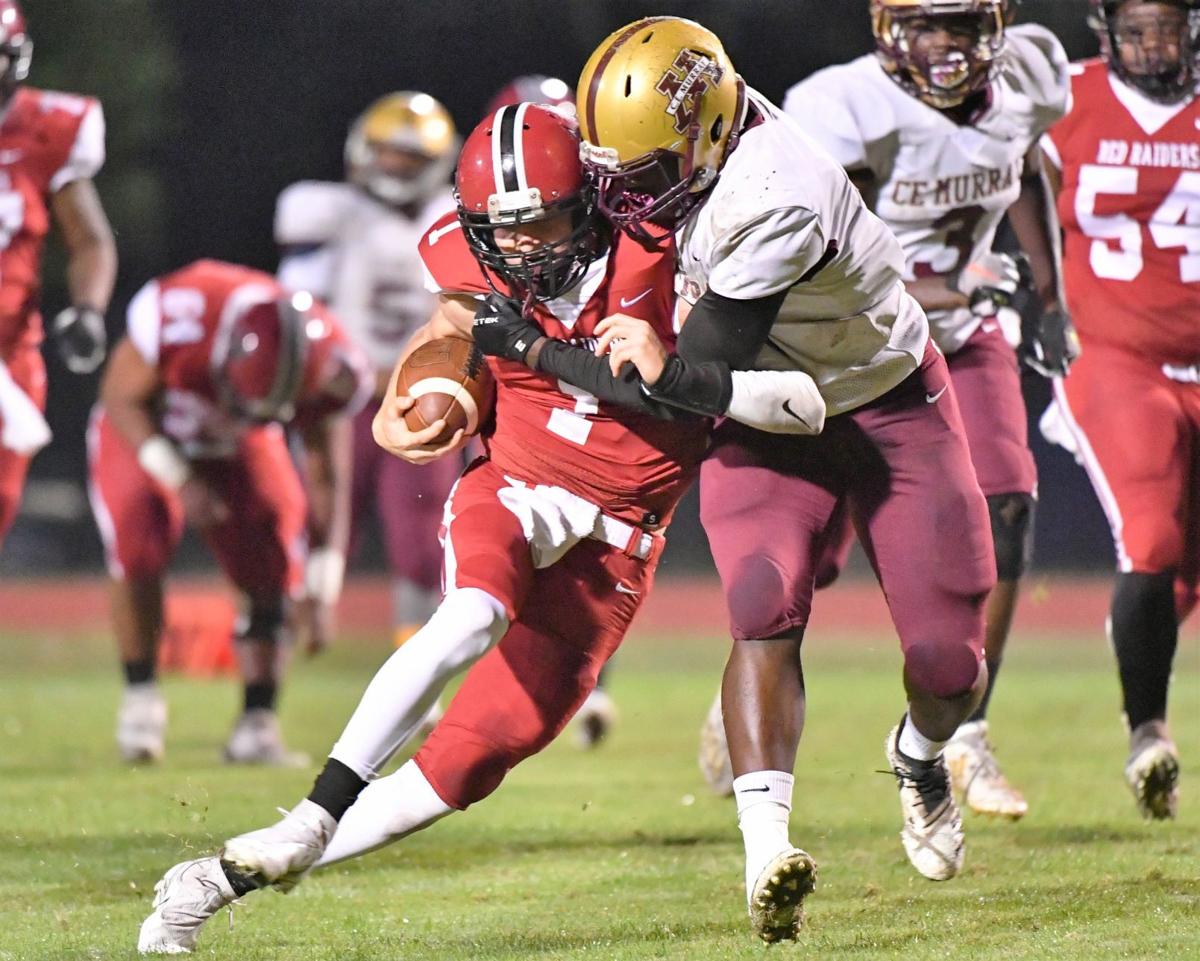 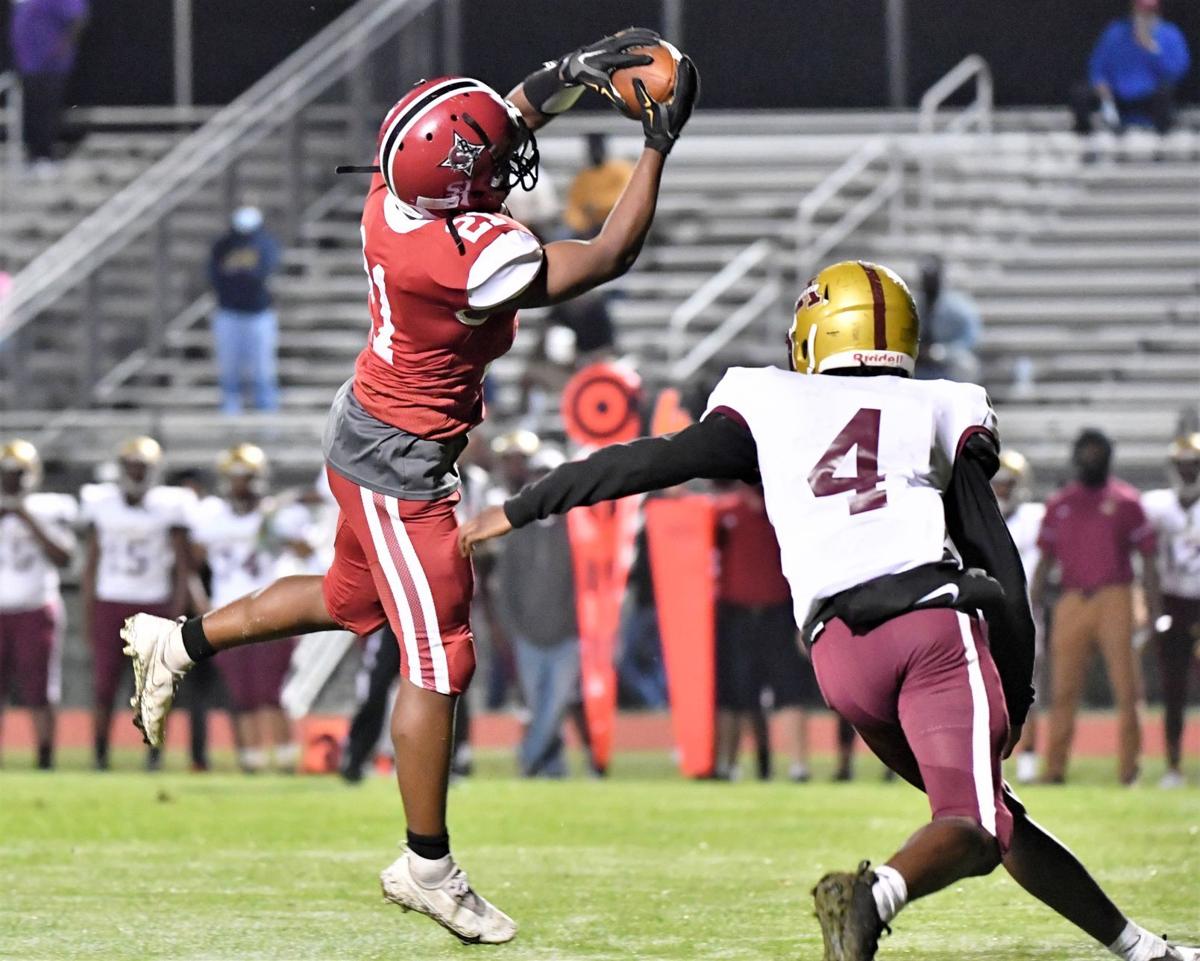 BAMBERG – The Bamberg-Ehrhardt Red Raiders advanced to the second round of the SCHSL Class A lower state playoffs on Friday night, with a 26-20 victory over the C.E. Murray War Eagles.

The War Eagles ended the season with a 3-4 record, while the Red Raiders moved to 8-0 and will play host to Whale Branch next Friday.

Bamberg-Ehrhardt gave up more points in one game than it allowed all season, but the defense was successful on its final stand to keep the Red Raider' lead intact.

“I think we’ve given up eight points all year, and we gave up 20 tonight, so they (B-E players) were a little shocked early," B-E Head Football Coach Robert Williams said. "But when it counted, they came up big for us.

“We said all week C.E. Murray has a great team. They’ve got some athletes, they’re big, they’re strong, and I think we came out a little flat to start with. But, we picked it up and it was a dog fight, and that’s what playoffs is supposed to be about.”

C.E. Murray opened the game with a bang. On their first offensive play, the War Eagles scored on an 80-yard wide receiver screen play. The 2-point conversion was no good, and the visitors from Greeleyville had an early 6-0 lead.

B-E put together its first scoring drive later in the quarter. With good field position, starting at the 25-yard line, the Red Raiders scored on their sixth play, when senior quarterback Treyton Still rushed one-yard into the end zone. The 2-point conversion was no good, tying the score at 6-6.

The War Eagles took the lead in the second quarter with a 60-yard scoring run by Tyree Prunes. Prunes found Amond Myers for the 2-point conversion, making the score 14-6.

The Red Raider offense answered with a score of their own, as Still found the end zone from 10 yards out on the sixth play of the drive. The 2-point conversion was not good, and the halftime score was 14-12.

The Red Raiders opened the second half with a nine-yard rushing score by Still to cap off a short four-play drive. Still rushed for the 2-point conversion, giving the Red Raiders the lead, 20-14.

A 56-yard touchdown pass from Still to Anthony Williams extended the Red Raider lead at the 4:34 mark of the third quarter. The 2-point conversion was unsuccessful, making the score 26-14.

The War Eagles got the ball back with 1:31 remaining in the game and 80 yards to the end zone to potentially tie or take the lead in the contest.

The War Eagles marched 50 yards before the Red Raiders forced two incomplete passes, and time expired, sealing the victory for the home team.

Still led the Red Raider offense, going 6-for-10 passing for 174 yards and a score, while also rushing 24 times for 80 yards and three scores.

B-E will face the Whale Branch at home next Friday. The Warriors won 52-12 at home in first round action against Johnsonville.

IN PHOTOS: Bamberg-Ehrhardt football gets 26-20 playoff win against C.E. Murray

Bamberg-Ehrhardt football took a 26-20 home win in the first round of SCHSL Class A lower state playoffs against C.E. Murray on Friday night. …

BAMBERG — Bamberg-Ehrhardt didn't score in the second half on Friday, but it didn't need to in taking an 18-15 SCHSL Class A football lower st…

Few things have seemed normal about the year 2020.