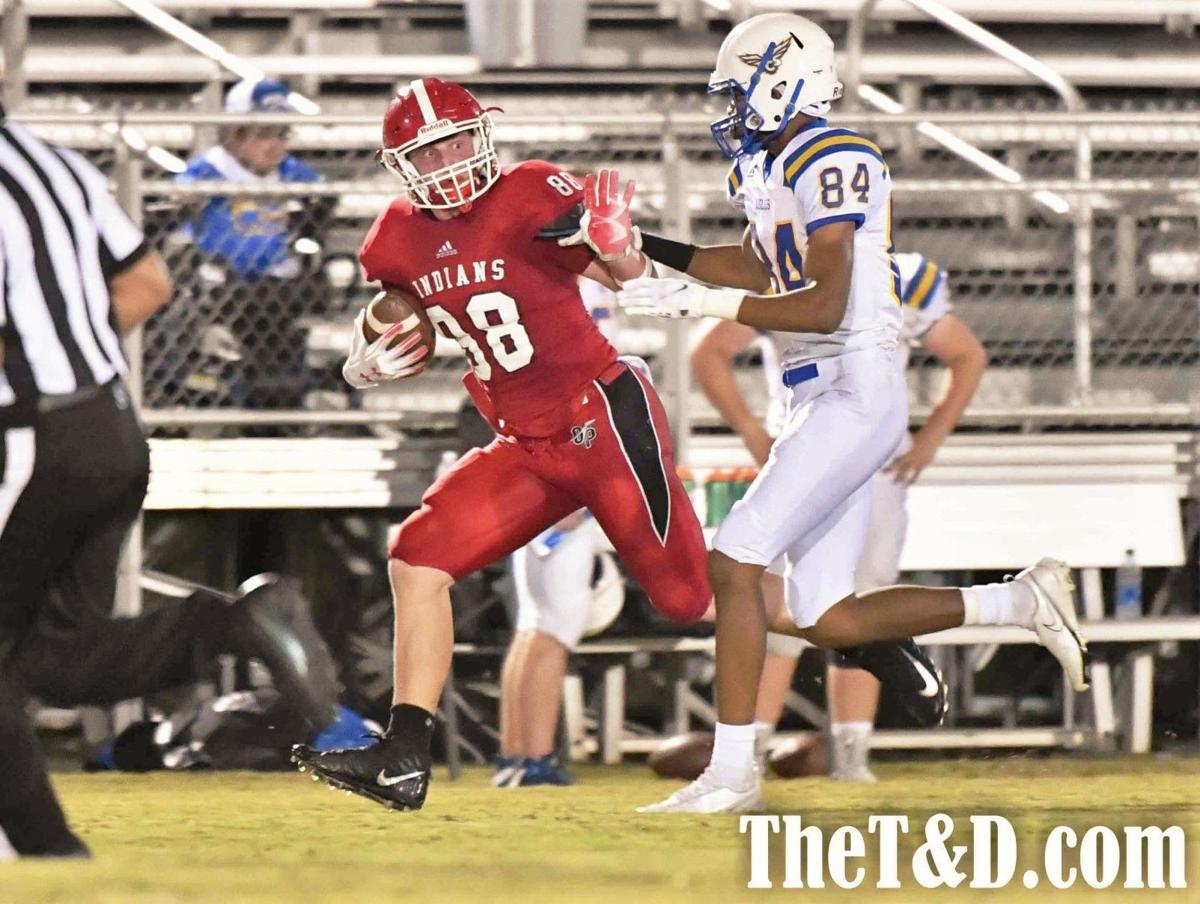 Orangeburg Prep senior tight end/wide receiver A.J. Tolbert runs for yards after a reception against Florence Christian defensive back Emekah Johnson (84) during a Nov. 6 SCISA Class 2A state playoff game win for the Indians in Orangeburg. Tolbert is the 2020 T&D All-Area Football Team Offensive Player of the Year. 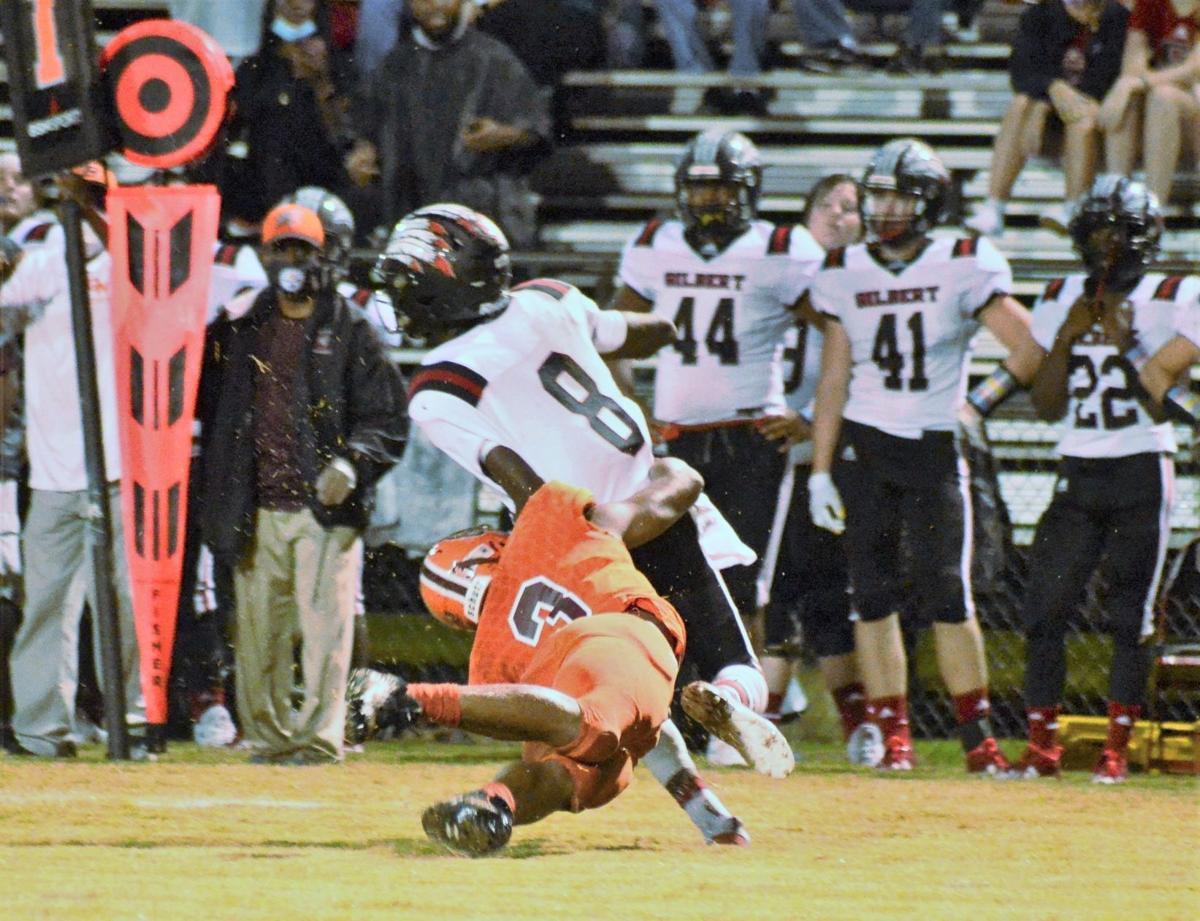 Orangeburg-Wilkinson senior linebacker Chris Austin (3) tackles Gilbert junior quarterback Izayah Whiteside (8) in the backfield in the first half of a Sept. 25 home Region 5-3A loss to the Indians. It was one of Austin's 12 quarterback sacks this season. Austin is the 2020 T&D All-Area Team Defensive Player of the Year. 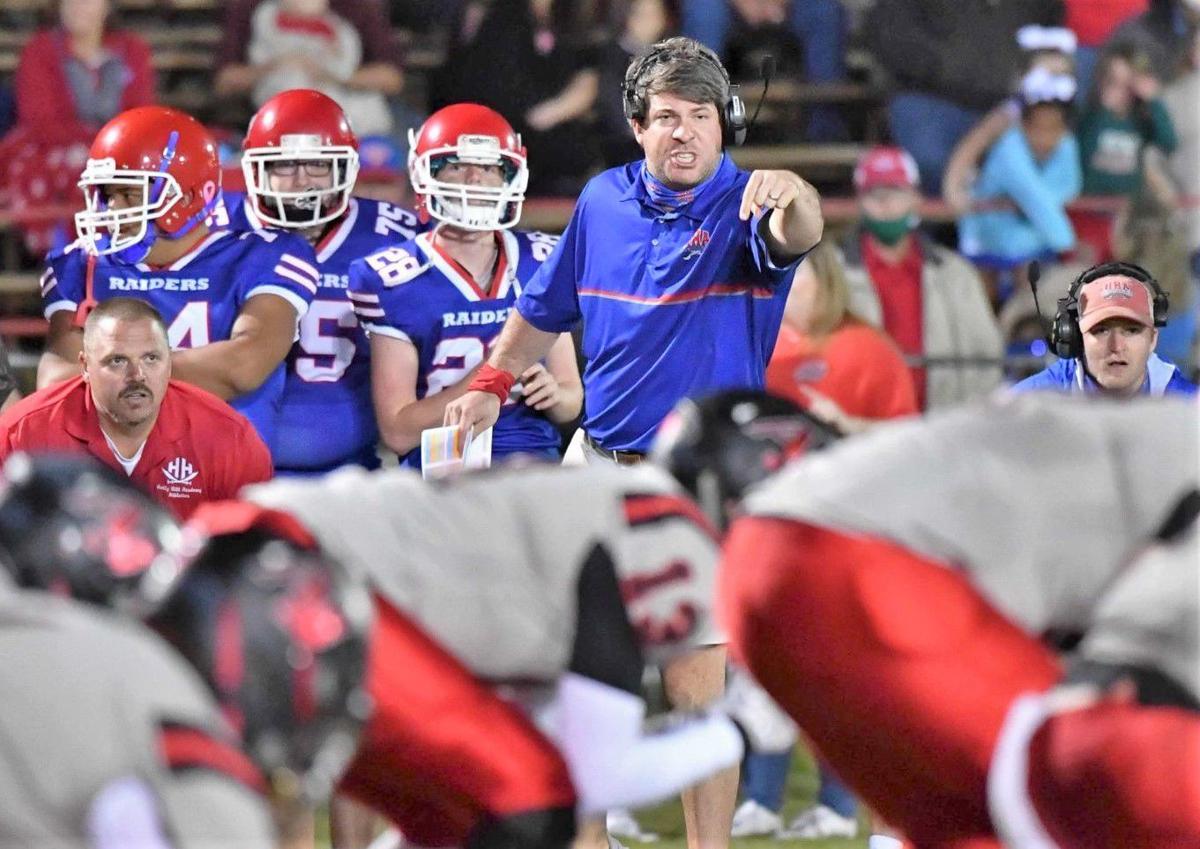 In his first season as head football coach at Holly Hill Academy, Michael Nelson directed the Raiders to a 12-0 season and the SCISA 8-man state championship. Nelson is the 2020 T&D All-Area Football Team Coach of the Year.

T&D Region high school football players and coaches made many adjustments and changes in 2020 to adapt to stringent health guidelines, in order to play any games.

Although school and some team activities looked far different from the norm, some area teams and standout players still managed to find success in a pandemic-impacted season.

Michael Nelson knew this season's Holly Hill Academy football team had the potential to win more than a few games.

This despite the fact that the Raiders program had won a total of seven games the past three seasons.

In his first year as head coach, Nelson knew the experience and potential was there, and he just needed to guide the program that had been building for a championship run.

"This team just was hungry, and it wasn't for just the three months of the season, but for at least 2-1/2 years," Nelson said. "They played with grit and a chip on their shoulder.

"This group has been playing together since junior varsity and they were thrown into the fire as ninth and 10th-graders on varsity. It helped having an experienced group coming in, with the 2020 issues and being my first year as head coach. The past two years had been about building our offense and defense, so we didn't have to worry in the preseason about installing a bunch of new things."

The Raiders still worked to improve and even added another weapon to their offensive arsenal.

"We worked on the passing game a bunch in practice, and we wanted to pull it out, but we never really needed to," Nelson said, as the Raiders still managed 714 yards passing and 11 touchdowns on mostly short pass plays. "This group was a bunch of unselfish guys playing with total team effort."

The team only had five seniors on the roster, so a repeat run to the state title game could be expected in 2021. Winning against then-defending state champion Andrew Jackson Academy was what Nelson describes as a "big mental hurdle," having been shut out in the same contest a year earlier.

"You go back and watch film and they did all the little things right, talked on both sides of the ball, worked well together in the trenches," Nelson said. "My assistant coaches on this staff (Seth Patrick, Eddie Judy, Tommy Breland, Billy Pelloni, David Walling and Hanks Avinger) really helped a lot, because I found out that coaching volleyball and football in the same season is no easy task.

"The championship was a complete staff and student effort. It takes a community to get things done. A few years ago, not just the football program, but the school in general was at a low point, in terms of enrollment. But now, numbers are up, things are great, and it's a good time to be a Holly Hill Raider."

How good is it?

HHA has had as many coronavirus cases as football losses in 2020 -- zero.

Orangeburg Prep's fifth season with Andy Palmer at the helm for the Indians saw the 2020 team one win away from playing for a SCISA Class 2A state championship.

With injuries impacting the starting lineup early in the campaign, healthy players had to step into expanded roles to help the team.

No one did so more than senior tight end/linebacker A.J. Tolbert, who led the team with 1,369 all-purpose yards and 19 touchdowns during the 8-3 season. He added 54 tackles from his linebacker slot and for all of his efforts earned SCISA All-Region 2-2A honors.

O-W's Hezekiah inks to play for the Howard Bison

He had 30 receptions for 666 yards and six touchdowns, while also rushing 25 times for 107 yards and 11 touchdowns. On 10 kickoff returns, Tolbert gained 363 yards, while on 10 punt returns he gained 233 yards and scored two touchdowns.

"He was definitely one of those guys who you go in on Sunday and try to figure a way to get him the ball more on Friday," Palmer said of Tolbert, who played tight end, wide receiver, running back and wildcat quarterback in various offensive sets. "We wanted to get him involved as much as possible.

"When he wasn't getting the ball, he blocked off at the point of attack on our run game. We had him involved in special teams play before this season, but he got bigger, faster and stronger and became such a threat when they would kick to him. You knew the ball wasn't going to hit the ground on a punt return, it's all those little things that save you field position. It's not a home run every time. For a lot of defensive backs and linebackers, he is a match-up problem. But A.J. has just been a blessing for us to work with."

"You know what you're going to get out of him on defense, because he comes to work every day, in film sessions, the weight room and work on the field," Palmer said. "On offense, by the end of the season, you just looked to see how many people they were going to take out of the box to try to cover him.

"When he got one on one (coverage) with somebody, we could really do some things. It gave people problems."

Tolbert has been contacted with offers from multiple college football programs, including Lenoir-Rhyne and North Greenville.

"He is a football/baseball guy and he will get an opportunity somewhere," Palmer said.

You can watch Chris Austin's junior season highlight clips online and see that he made a difference for the Orangeburg-Wilkinson defense in 2019.

But the linebacker (6-foot, 210 pounds) improved and registered a Class 3A All-State senior season in 2020 that put clamps on opposing offenses and helped the Bruins limit teams to an average of 14 points per game.

Austin made 82 tackles in just 7 games, as the Bruins went 5-2, finishing the campaign with a 10-0 shutout of Lower Richland. Staring down offensive backfields to read the play, Austin had 18 tackles for a loss, including 12 quarterback sacks.

"He grew up on the field, and that started with a great job in the offseason, making sure that he lifted and pushed the other guys to prepare too," O-W coach Butch Crosby said. "With Chris, you could see on the field the maturity of him becoming a football player, he began understanding what it took to be a defensive football player.

"It was just a matter of understanding it all, since his first year starting for us was his junior year. We went from a 3-4 to a 4-3 then back to a 3-4 (formation), that made him a lot more comfortable and he just ran with it."

Through his junior season, Austin got to the ball carrier and made the tackle. In 2020, Austin routinely drove with his feet through tackles and stopped opponents in their tracks."

"When he comes off the ball, he is really physical," Crosby said. "He was definitely a leader for us. Guys looked up to him and they would respond when he talked and when he made plays.

Crosby describes Austin as one of the main players he communicated with via phone and Zoom through the pandemic-impacted preseason and season.

"I talked with him on a frequent basis, telling him we would have to stay safe, live in a bubble of sorts, and not be distracted," Crosby said. "We always go in (to games) wanting to pitch shutouts every week.

For his efforts in workouts and practice, on the field and in the classroom, Austin has had multiple college football programs contact him about signing with them on National Signing Day in February.

The ART of reaching 1,000: Inabinet set to reach coaching milestone at Francis Marion

Four Orangeburg-Wilkinson Bruins will be taking their talents to the next level after officially signing Wednesday to play college football.

Orangeburg Prep senior tight end/wide receiver A.J. Tolbert runs for yards after a reception against Florence Christian defensive back Emekah Johnson (84) during a Nov. 6 SCISA Class 2A state playoff game win for the Indians in Orangeburg. Tolbert is the 2020 T&D All-Area Football Team Offensive Player of the Year.

Orangeburg-Wilkinson senior linebacker Chris Austin (3) tackles Gilbert junior quarterback Izayah Whiteside (8) in the backfield in the first half of a Sept. 25 home Region 5-3A loss to the Indians. It was one of Austin's 12 quarterback sacks this season. Austin is the 2020 T&D All-Area Team Defensive Player of the Year.

In his first season as head football coach at Holly Hill Academy, Michael Nelson directed the Raiders to a 12-0 season and the SCISA 8-man state championship. Nelson is the 2020 T&D All-Area Football Team Coach of the Year.