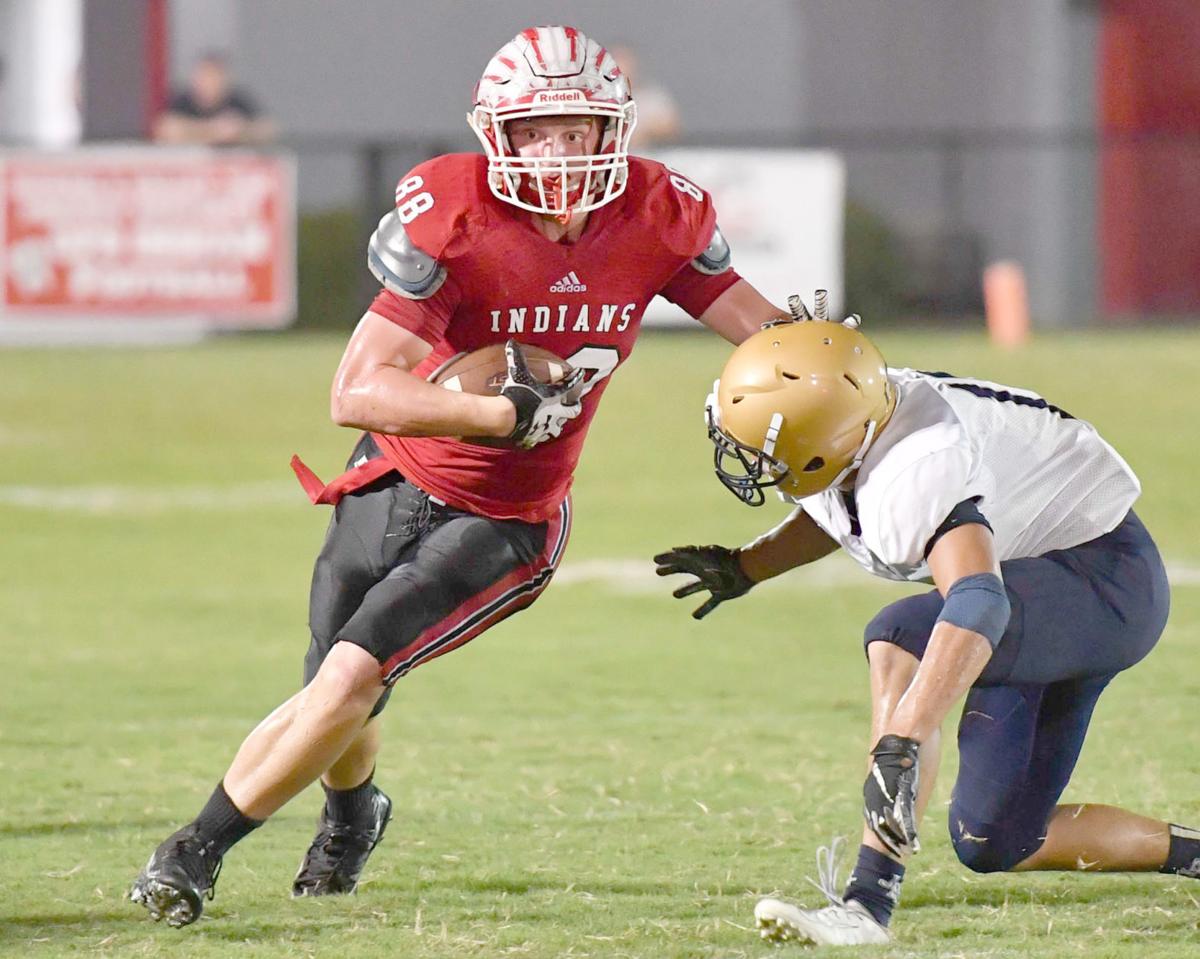 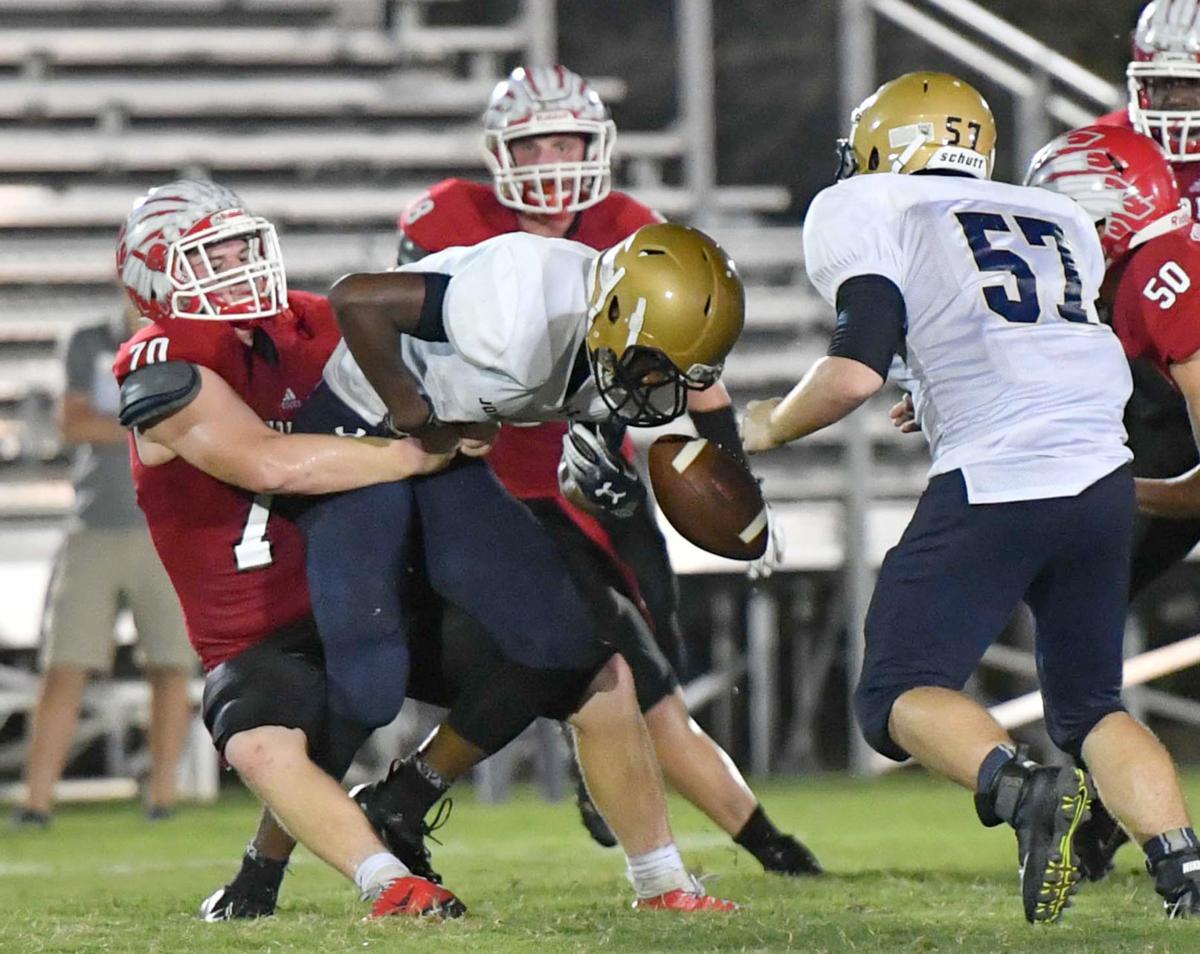 Orangeburg Prep's Kenneth Fogle (70) forces a fumble by a ball carrier for John Paul II during a 53-19 homecoming win for the Indians on Friday.

The Orangeburg Prep Indians capped off homecoming night with a 53-19 football victory over the John Paul II Warriors on Friday at Indian Field.

The Indians (4-1, 2-0 in region) secured the region victory against the Warriors (0-6, 0-2) and OP head coach Andy Palmer collected the 100th win of his head coaching career in the process.

Palmer, who was head coach at Edisto and an assistant coach at Bamberg-Ehrhardt before coming to Orangeburg Prep, was proud to reach the career milestone.

"A couple of years in Bamberg and got my feet back on the ground, then get over here and they’ve been so receptive to me and my family. It’s just been a godsend to be able to be here and get back to work. One hundred is a number that you can’t say you didn’t want to get to it. You want to do those things. A lot of kids, a lot of coaches that got us here, and so we’re just appreciative of those people.”

The Indians opened the game on offense, and capitalize on the opportunity by putting points on the board early. A 9-play drive was capped off when running back Preston Wells ran three yards for a score. The PAT was blocked by the Warriors, making the score 6-0 with 8:00 left in the first quarter.

On the ensuing kickoff, Nick Shafer caused the first turnover of the game, stripping the ball from the Warriors in their attempt to return the kick.

The Indians took over on the 37-yard line, and three plays later, quarterback McCullough Mims scored on a one-yard keeper. The 2-point conversion was no good, making the score 12-0.

The Indians forced the second turnover of the game when Cade Wiles intercepted a pass at the 5:22 mark of the first quarter, but the following drive sputtered, resulting in a punt.

John Paul II was able to get points on the board just before the first quarter ended. On the final play of the 8-play drive, Jeremiah Young found Mark Knight in the back corner of the end zone for a touchdown pass. Sebastian Laverde’s PAT made the score 12-7.

Both teams had trouble hanging onto the ball on the next two drives. OP fumbled the ball and it was recovered by JPII. Two plays later, the Indians forced a fumble and recovered it on the 45-yard line.

The very next play, Will Summers took the handoff on the left hash and raced for the touchdown. The PAT attempt was no good, making the score 18-7 on favor of OP.

The Indian defense forced a turnover on downs, which set the offense up on their own 45-yard line. Amir Tyler took the handoff and raced up the left hash, this time for a 55-yard score. Peyton Inabinet’s PAT made the score 25-7.

The Indian defense stood firm, forcing a punt. The Indians began their drive on their own 20-yard line. On fourth down, the Indians lined up for what appeared to be a punt, but Summers took the snap and rushed eight yards for a first down, keeping the drive alive.

Faced with a fourth down on the 8-yard line, and they were able to score on an eight-yard pass from Cory Collins to Mims. Inabinet’s kick made the score 32-7.

The Warriors responded with a score of their own. Just before halftime, JPII scored on a one-yard run by Rodreco Anderson. The Indians blocked the PAT attempt, leaving the score 32-13.

The Indians opened the second half with an onside kick and recovered it, setting up their offense on the 45-yard line. Five plays later, Mims rushed for a one-yard score, followed by Inabinet’s PAT for a 39-13 score.

The Indians got their second interception of the game when Billy Workman picked off a Warriors’ pass attempt. OP found the end zone two plays later on a 33-yard rush by Tyler. Inabinet's kick made the score 46-13.

OP’s final score came at the 1:33 mark of the third quarter. Inabinet scored on a one-yard rush and followed his touchdown with a PAT.

John Paul II scored the last points of the game with 9:43 left, when Young rushed 20 yards for a score, followed by an unsuccessful 2-point attempt.

Summers, Inabinet, Tyler, and Mims led the Indians’ heavy rushing attack, which featured three rushers with 100 or more yards. Tyler was the leading rusher, with 127 yards and two touchdowns on just 4 carries.

Summers was the second-leading rusher, totaling 114 yards on 8 carries and one touchdown. Inabinet totaled 103 yards on 17 carries and 2 scores. Mims added two rushing scores of his own, each for a yard.

The Indians will face their next region opponent, the Hilton Head Christian Academy Eagles, at home next Friday. Both teams will head into the contest undefeated in region play.

THURSDAY MORNING QUARTERBACK: Key region games are upon us

Region football season is officially in progress throughout The T&D Region.

Orangeburg Prep's Kenneth Fogle (70) forces a fumble by a ball carrier for John Paul II during a 53-19 homecoming win for the Indians on Friday.