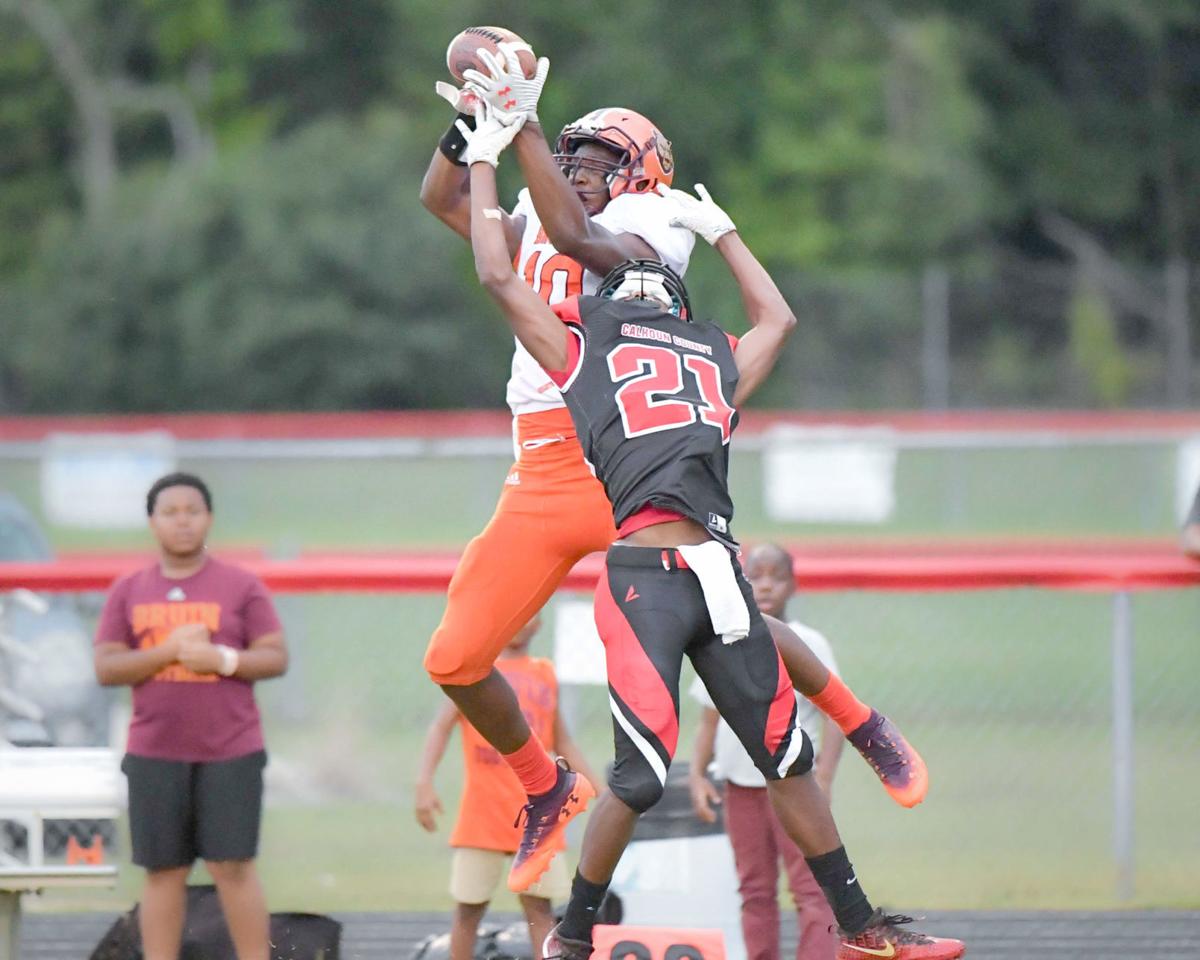 Nah'shawn Hezekiah (10) of Orangeburg-Wilkinson goes up for a reception over Calhoun County defensive back Michael Brunson (21) during Friday night's 27-0 season-opening win by the Bruins. 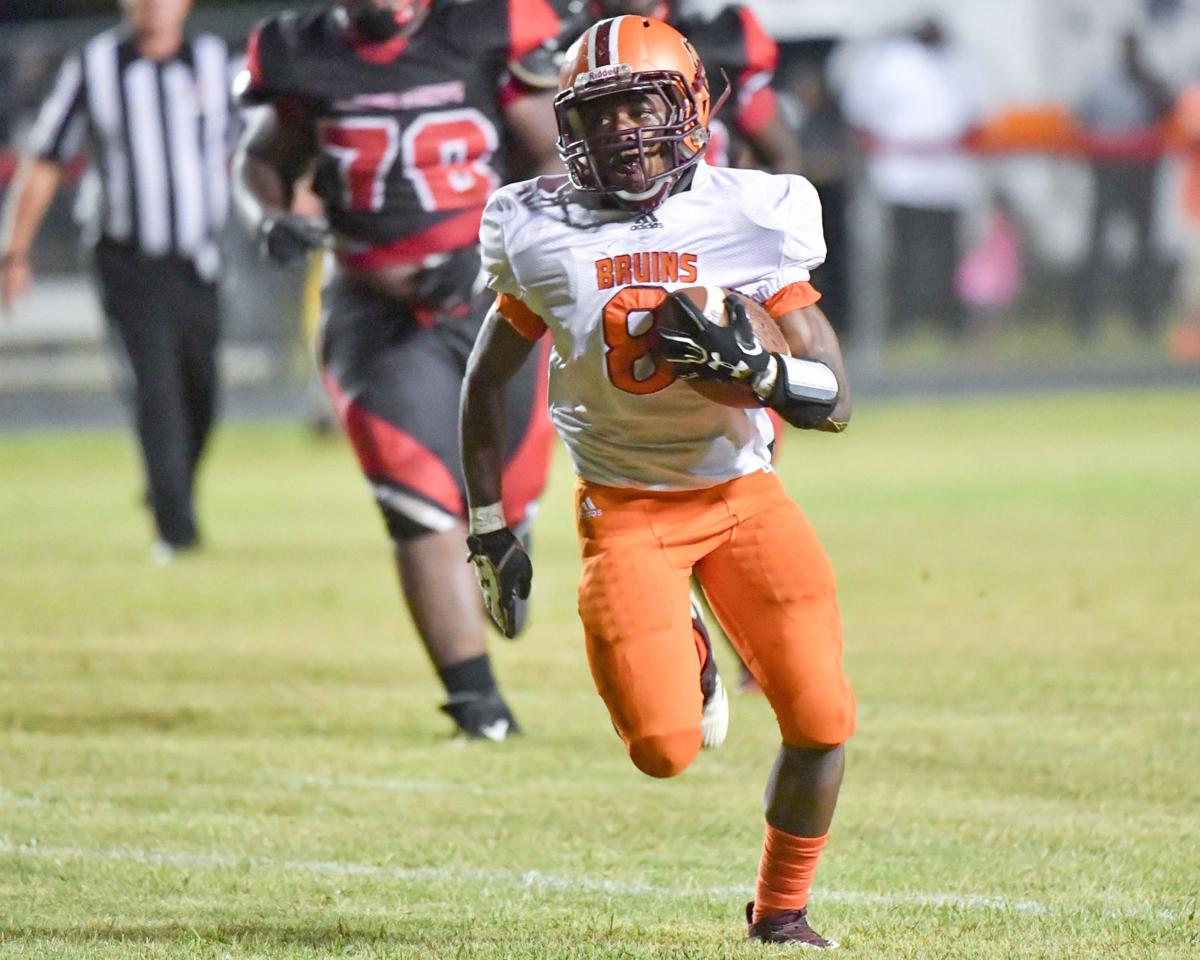 Orangeburg-Wilkinson running back Isaiah Tyler (8) takes off for a 34-yard touchdown run in the third quarter against Calhoun County in the season-opener on Friday night.

Nah'shawn Hezekiah (10) of Orangeburg-Wilkinson goes up for a reception over Calhoun County defensive back Michael Brunson (21) during Friday night's 27-0 season-opening win by the Bruins.

Orangeburg-Wilkinson running back Isaiah Tyler (8) takes off for a 34-yard touchdown run in the third quarter against Calhoun County in the season-opener on Friday night.

ST. MATTHEWS – In the Week Zero battle between two T&D Region teams, the Orangeburg-Wilkinson Bruins shut out the Calhoun County Saints for a 27-0 season-opening victory on Friday night.

O-W (1-0) was led by a stingy defense that even outscored Calhoun County (0-1) in the contest.

“I thought we came out and played hard,” Bruins head coach Kevin “Butch” Crosby said. “Defensively, I thought we played well. Coming in the first game of the year you’ve got to play a wing T (formation) team.

"They’re good at what they do. I thought we were well-prepared. I thought we came out and executed what we needed to do defensively.”

Although the Bruins scored 27 points, their offense was not as consistent as Crosby would have liked.

“I still think we’ve got some things we have to clean up, but for the first game, I felt pretty good about it,” Crosby said.

On their first offensive possession, the Saints were forced to punt after two rushing attempts and an incomplete pass.

The Bruins took over on the 27-yard line. On their second play from scrimmage, O-W fumbled but managed to recover the ball to prevent a turnover. Five plays later, Tre’Erion Thomas rushed 19 yards for a score. Aaron Tinker connected on the extra point, giving O-W a 7-0 lead.

The next Bruin score came with 1:46 left in the first half. Sophomore quarterback Jyrion George ran the ball for a one-yard score, and Tinker followed with the extra point to make the score 14-0.

The Bruins opened the second half on offense and capitalized on the opportunity by going on a five-play scoring drive. Isaiah Tyler ran the ball 34 yards for a score. The extra point attempt was no good, and the score was 20-0.

Calhoun County’s offense showed some promise on their first offensive possession of the second half, but the drive sputtered out, resulting in a turnover on downs.

O-W’s final score of the game came at the 11:55 mark of the fourth quarter. Rodney Gadson intercepted a pass at the 15-yard line, made a Calhoun County player miss, and hurried into the end zone. Tinker followed with a successful extra point, sealing the game with the 27-0 score.

The rushing attack carried O-W’s offense, totaling 173 yards. Tyler led all rushers with 73 yards on nine attempts with one touchdown. Jordan Hampton was the next leading rusher with one carry for 48 yards. Thomas added 10 carries for 39 yards and a touchdown.

Crosby stated that his offense’s 27-point total should have been higher.

“Offensively, we had spurts where we left some points on the board,” he said.

The Bruins fumbled the ball five times, two of which resulted in turnovers. Crosby said ball security has been a constant message relayed to his team throughout the preseason, in scrimmages and jamboree action.

“We put the ball on the ground too much tonight," Crosby said. "Two times is too many for me.

"That’s my biggest heart next week is we better have ball security.”

The Bruins will play their home-opener next Friday, as they are set to face Crosby’s former team, the Bamberg-Ehrhardt Red Raiders, at 7:30 p.m.

“We’ve got Bamberg; they’re traditionally tough," Crosby said. "Coming from Bamberg - being there for a long time - I know it’s going to be tough.

“Good thing is we’ve got them at home. We’ve just got to get prepared. Our kids, they’ll be ready to play. We’ll find a way to figure out how we can stop them and how we can score against them.”

Calhoun County will be on the road next Friday, as they are set to play the Pelion Panthers, another team seeking its first win of the season.

TD CLUB: Mike Ayers says everyone can be a difference-maker

The 18th season of the Orangeburg Touchdown Club opened with Thursday's meeting at The Cinema, and guest speaker Mike Ayers, the former Woffor…