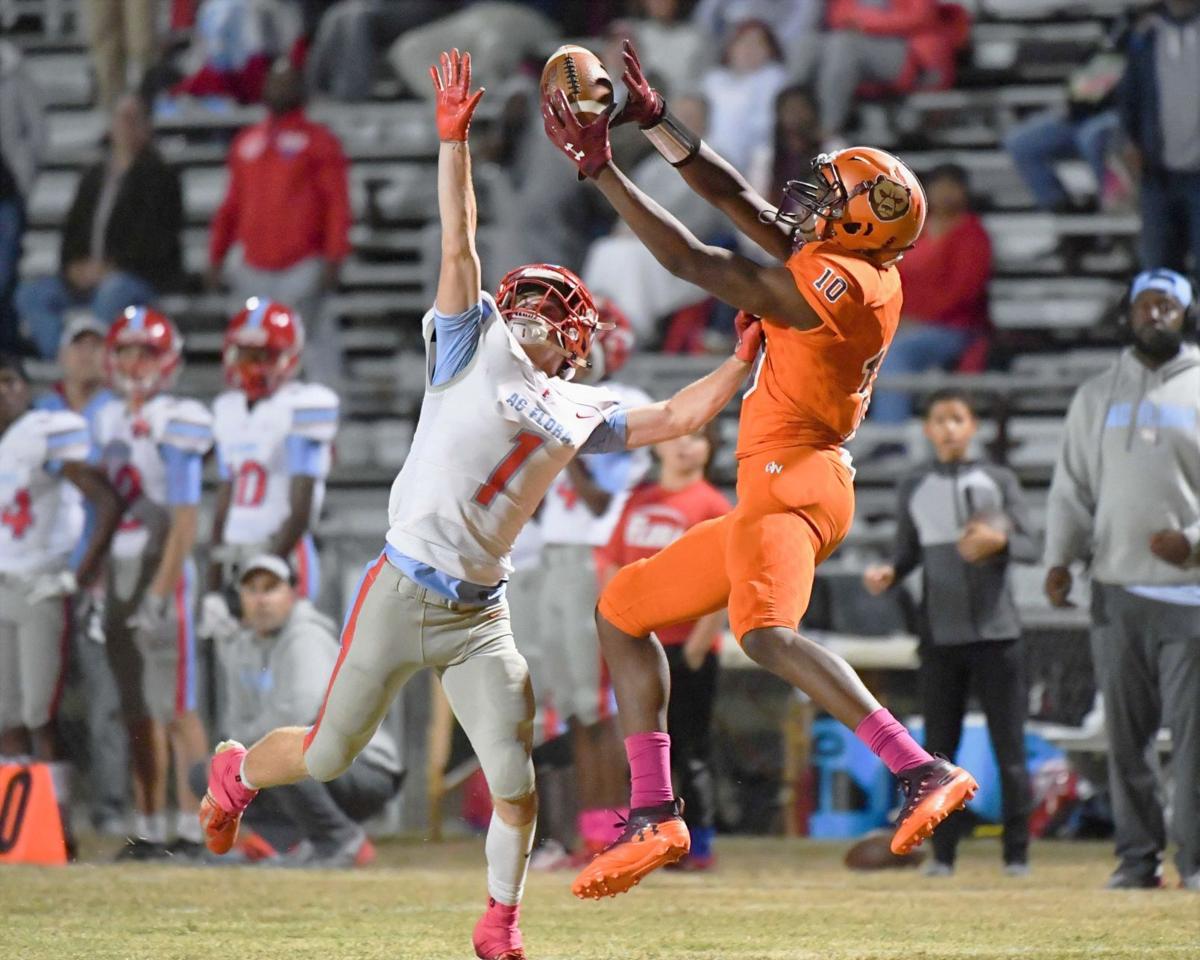 Orangeburg-Wilkinson wide receiver Nahshawn Hezekiah (10) catches a pass against the defense of AC Flora senior strong safety Zared Godwin (1) during a 28-14 home region loss to the Falcons on Oct. 18, 2019. 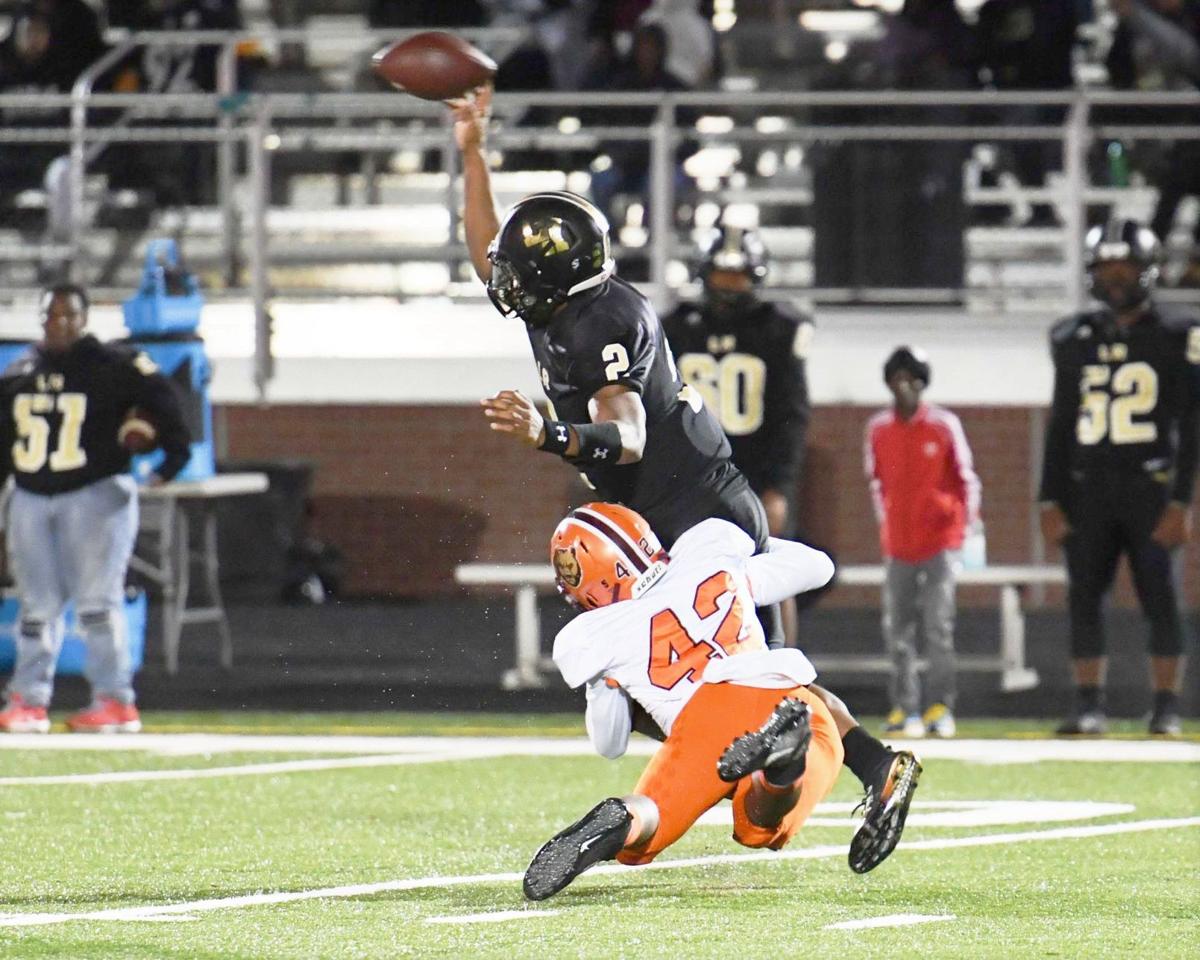 Coming off a winning season in his second year leading the program, Crosby and his coaching staff looked forward to getting underclassmen together in the weight room in preparation for the 2020 season. Some players were going to improve their speed and agility during track season.

But three days later, all of that was called off when South Carolina public schools shut down and operated online only due to the public health scare brought on by the coronavirus pandemic from COVID-19.

Now, in mid-May, Crosby is making contingency plans for whenever the South Carolina High School League says teams can even partially assemble together again for group workouts of any kind.

"Being apart, we're just trying to stay in contact with the kids and Zooming (online video conferencing), so hopefully they can stay in shape and we can continue planning for the upcoming season," Crosby said this past week. "It's weather the storm and see when we can get back in the weight room as a unit, as a group, as a team.

"We've just been trying to keep the kids positive through it all."

Crosby and his coaches have collected regular reports of Bruins players doing workouts on their own.

"A lot of them have been doing individual stuff at home, some drill work, just trying to keep in a football mindset," he said.

Knowing all coaches nationwide are dealing with the same setback in off-season preparations doesn't make it any easier.

"It's one of those things that's new to everybody," Crosby said. "We've talked about e-learning for school itself before this, but we never really thought about it for sports. As we've seen, the NCAA and the NFL weren't prepared for something like this.

"It's all figuring it out as we go. We don't know how long it's going to last. We're hoping by June we can start working out, at least in small groups, but right now there's nothing in stone. Sure, maybe it's not till July or August, if then. We just hope for the best and see what we can get accomplished. It will be great just to allow us to get with our team, maybe get some skill work in outside, something to give us some hope for a football season."

In Crosby's first season with the Bruins — after leading Bamberg-Ehrhardt for a decade — O-W went 4-6 in 2018. The program rebuilding continued in 2019 as the Bruins posted a 6-5 record and made the Class 4A playoffs.

Now, Crosby and his coaches want to have a good first season moving to the Class 3A ranks. But they don't know yet how young players missing spring workouts together with teammates will impact things once the season gets here.

"Some of our guys really needed this spring to work out and get stronger," Crosby said. "Those that are committed to it, they will do what it takes to be ready to go when we can get back to it. Others will do less and you will be able to tell when we get back together; it will show drastically.

"Just being around each other, that's the biggest thing we are missing. Now, going on eight weeks, they haven't seen each other and they have no stories to tell of what they've done as a team."

The lack of preparation and conditioning could be a major setback or just a minor bump in the road.

"It throws a monkey wrench in it, but we've been getting together on Zoom as much as possible," Crosby said. "As coaches, we talk about what we plan to implement for workouts, for game plans, for things short-term and long-term.

"It makes me really appreciate the time we have together. Kids who love this game have to be saying they are going to take advantage of this. Spring seniors didn't get a chance to play and finish their final season. The underclassmen coming back will appreciate that and any opportunity they get to compete."

The Bruin program is in an important position. Going forward, will the team play like the one that won five games in a row in 2019 or the team that finished that campaign with four straight losses?

"That's something we've talked about, building that culture and that toughness, knowing how to finish games," Crosby said. "We tell them it's a process and you have to trust the process. This is a setback, without having spring ball, but I think the kids will come back more hungry than before.

"I think it's going to impact everybody, all positions on the team. I think the skill guys are probably doing some things to get out there and play some backyard football and work on things. Hopefully they are being active. Kids are going to be kids and not stay in the house all day."

Crosby believes most teams will show signs of weakness or inexperience in the first part of the season, whenever high school games return.

"I think it will show up early, but come region time, you want to be ready," he said. "But, we might not start till we have region games.

"If we have non-region games, we will use the early games as preseason games. There are new challenges, changing regions and coming back to 3A. It's a tough region to be in, (Region 5) with Strom Thurmond and Gilbert and Brookland-Cayce and Swansea and Fox Creek. We will have to respond quickly and get things done."

There will be some sense of relief and a return to normal life when teams can get back to activities.

"Playing football is playing football, whether we get five or six games in, or a full season," Crosby said. "It's just having the opportunity to play, especially for our upcoming seniors who have put in the work before all this happened.

"If we don't get to play football, it will be tough for the community and the schools, since football supports all sports. For now, it's wait to hear from our governor and the High School League to know when we can do anything else. I'm ready for us to be able to do something, since the last few weeks I've done more house work and yard work than ever before, even cutting down trees I planned to cut for years."

The hope is that spring cleaning and home projects will soon safely give way to summer conditioning workouts and team gatherings, in some form or fashion.

May 17, 2020: What South Carolinians need to know about the coronavirus

Calhoun Academy senior Bates Felder, Jr. was surprised to find out during his graduating class ceremony on Saturday, May 23 that he had won th…

T&D Region athletic programs preparing for fall sports, when allowed to do so

The S.C. High School League Executive Committee approved on Wednesday its plan to shift the beginning of the high school football season in So…

Throughout the summer, Orangeburg County School District’s administration and Board of Trustees have held strong to their decision to delay at…

Orangeburg-Wilkinson wide receiver Nahshawn Hezekiah (10) catches a pass against the defense of AC Flora senior strong safety Zared Godwin (1) during a 28-14 home region loss to the Falcons on Oct. 18, 2019.