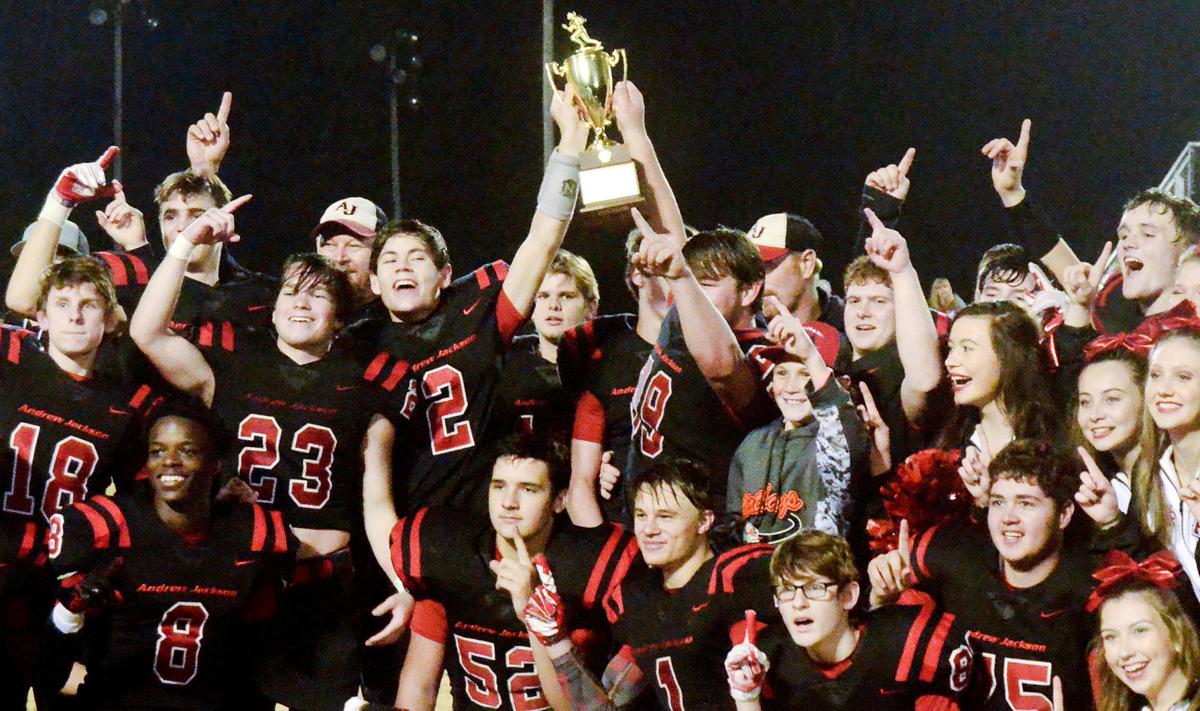 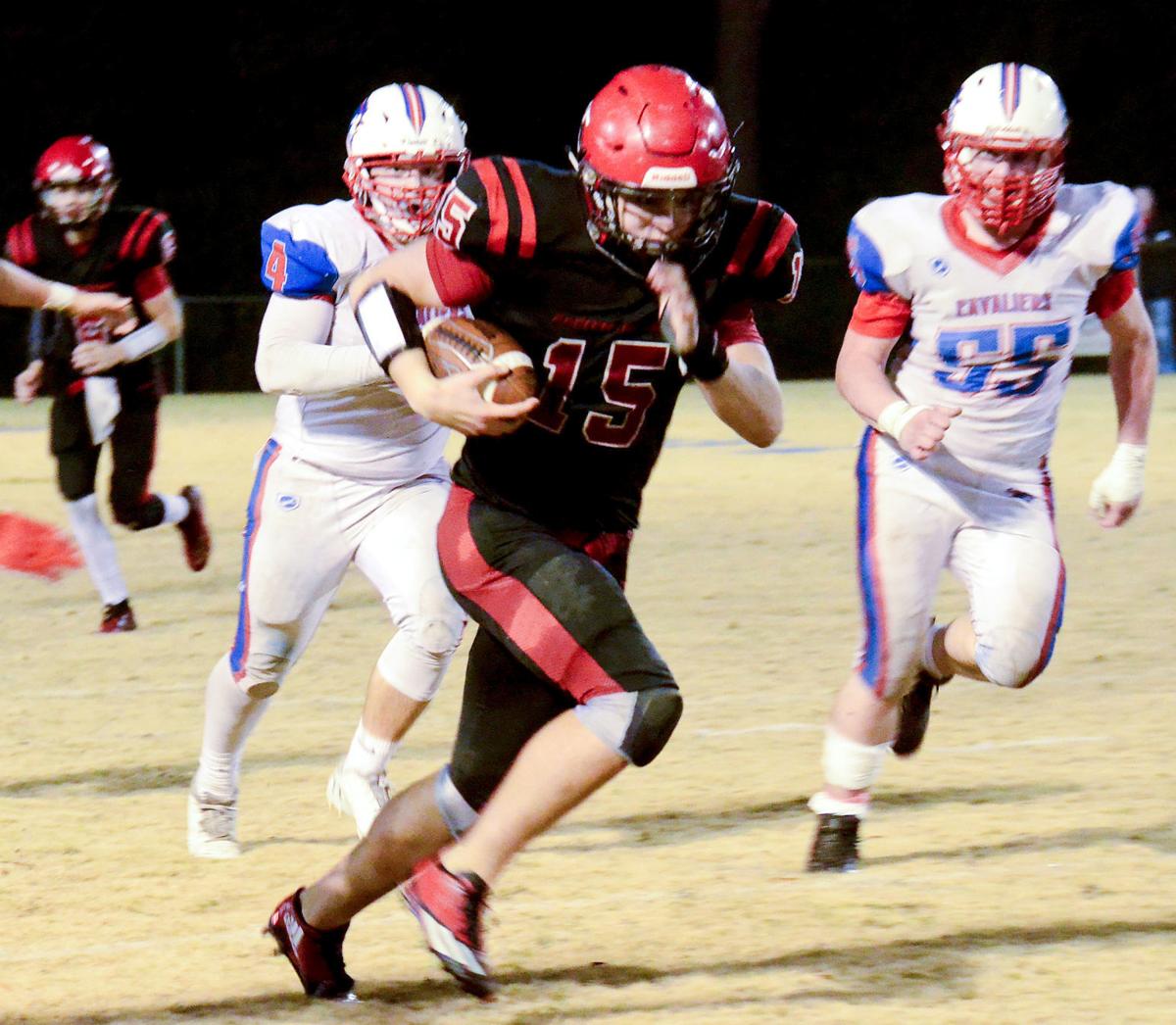 ST. MATTHEWS – The Andrew Jackson Academy Confederates are back in a familiar place, after beating the St. John’s Christian Academy Cavaliers 44-28 to capture the SCISA 8-Man Football State Championship on Friday night at the Calhoun Academy field.

In his first year as the head coach, Jason Peek said he is proud his team finished the season undefeated, especially for the seniors.

“We’ve got 10 seniors on this team, they go out champions," he said. "Such hard work since May, summer practices.

"The dedication and the gel, all of these kids gelled together and that’s why we’re here.”

Peek took over from Allen Sitterle who led the program to 2 state title wins in the previous 4 seasons. AJA won the title in 2017, a year Sitterle didn't coach, and lost the title game by 2 points a season ago with Sitterle on the sideline.

“I filled some pretty big shoes of Coach Sitterle," Peek said. "I’ve got to give him credit for teaching me for the last five years."

Winners of 71 of their last 72 games, AJA is used to winning. The one loss in this run came to the Beaufort Academy Eagles in the championship game last year. Ending the season on a sour note motivated the team heading into this season.

“Last year we fought - blood, sweat, and tears, every day, and fell short by two points," senior nose guard and fullback Tucker Cook said. "This year, I knew coming into the season that this is the season, because we fell short last year and that just struck everybody on our team."

Senior tailback/cornerback Trey Pulaski was overjoyed at the accomplishment.

“It’s amazing, it’s great,” Pulaski said. “We knew it was going to be a good game and we were ready.

"This is what we wanted, can’t be more happy for it.”

“It’s indescribable," he said. "Not many people can say they’ve played for five state championships and won four.

Sophomore linebacker/fullback Johnathan Schaffer led the charge offensively, with 156 yards and 3 touchdowns on 19 carries. Schaffer said he was glad the senior class was able to finish their final season with a championship.

“It’s just amazing to come out and play as a team, and have so much adversity and to be able to overcome it," he said. "Those seniors are great.”

The opening offensive drives for each team were full of penalties and both resulted in punts. The first team to reach the scoreboard was the Cavaliers on a 12-yard touchdown pass. Running back Fletcher Law ran in the 2-point conversion, making the score 8-0.

SJCA fumbled on the following possession, and it was recovered by AJA’s Adam Creswell. Seven plays later, Cook rushed into the end zone from 12 yards out. Again, the 2-point conversion was no good, making the score 12-8 in favor of AJA.

SJCA answered with a short three-play drive that was capped off by a 15-yard scoring pass from Nai’Ryan Bookert to Jaden Bradley. The 2-point conversion failed, making the score 14-12 with SJCA in the lead.

The Confederates went on a 10-play drive to retake the lead with 34 seconds left before the half. Schaffer took a handoff up the middle for a four-yard score. He also ran in the 2-point conversion, giving the Confederates a 20-14 halftime lead.

The first score of the second half didn’t come until the 1:30 mark in the third quarter. Colyn Peek passed the ball to a wide-open Bryce Hughes who ran 18 yards after the catch for a score. Schaffer ran in the 2-point conversion, making the score 28-14.

AJA added to their lead with a 36-yard touchdown run by Schaffer at the 8:49 mark of the third quarter. He added the 2-point conversion, making the score 36-14.

St. John’s scored its first points of the second half with 7:28 left in the game. Bookert ran eight yards for a touchdown, and added the 2-point conversion, making the score 36-22.

AJA reached the end zone for the final time with 3:45 left in the game. Schaffer rushed in for a 13-yard score, and Bug Brunson followed with the 2-point conversion, making the score 44-22.

The final points of the game came on a 45-yard run by SJCA's Bookert, who followed his touchdown by rushing in for the 2-point conversion.

Offensively, the Confederates relied heavily on their ground game. Creswell was the second-leading rusher with 49 yards on 11 carries.

Dillon at May River

For the 4th time in 5 years, the high school football season in The T&D Region and the final Thursday Morning Quarterback ends with a cham…

DID YOU SEE THIS? Early Christmas present: Mother of 5 thankful for new Habitat home