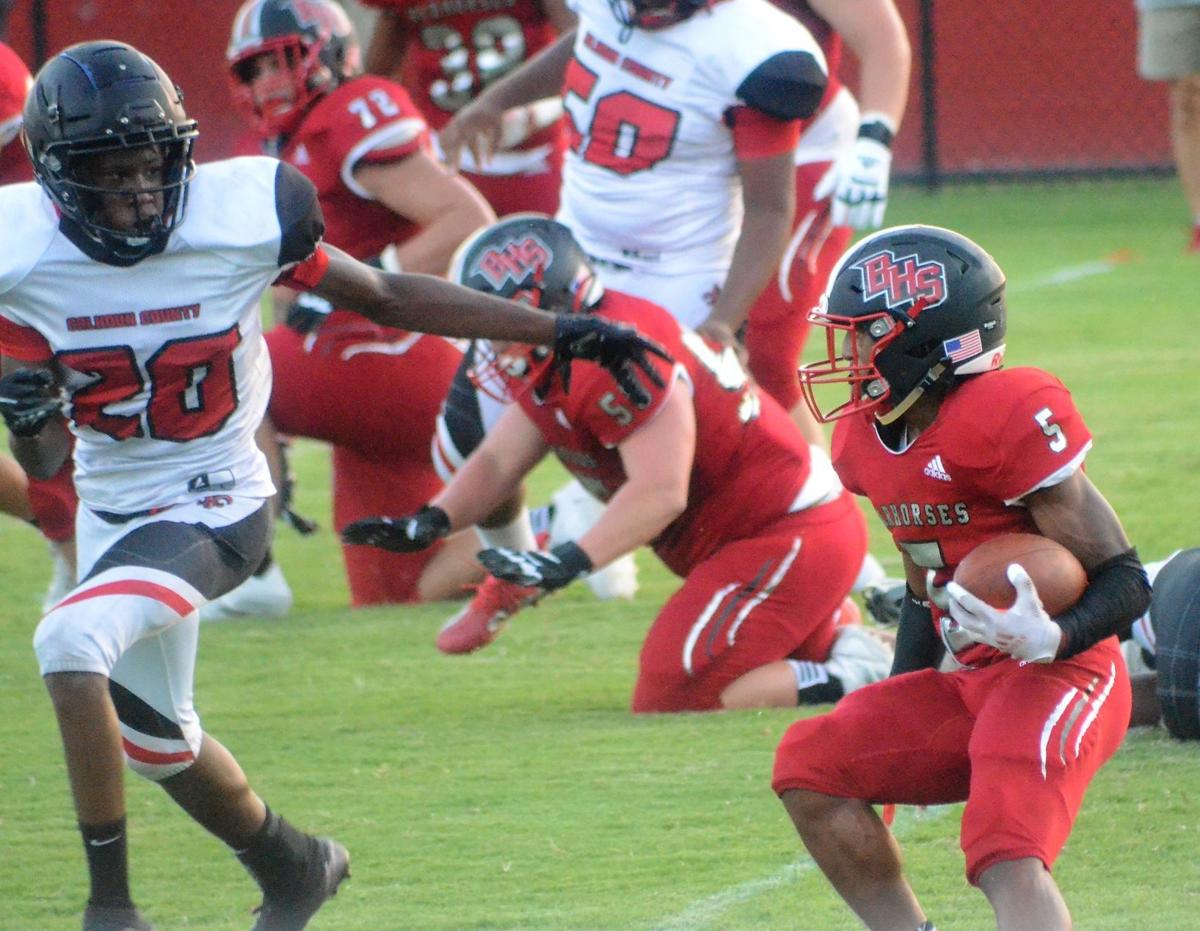 Calhoun County's Jaivon Pondexter (20) looks to tackle Barnwell running back Mario Jones during the first half of the Saints' upset win over the Warhorses in Barnwell on Aug. 26. 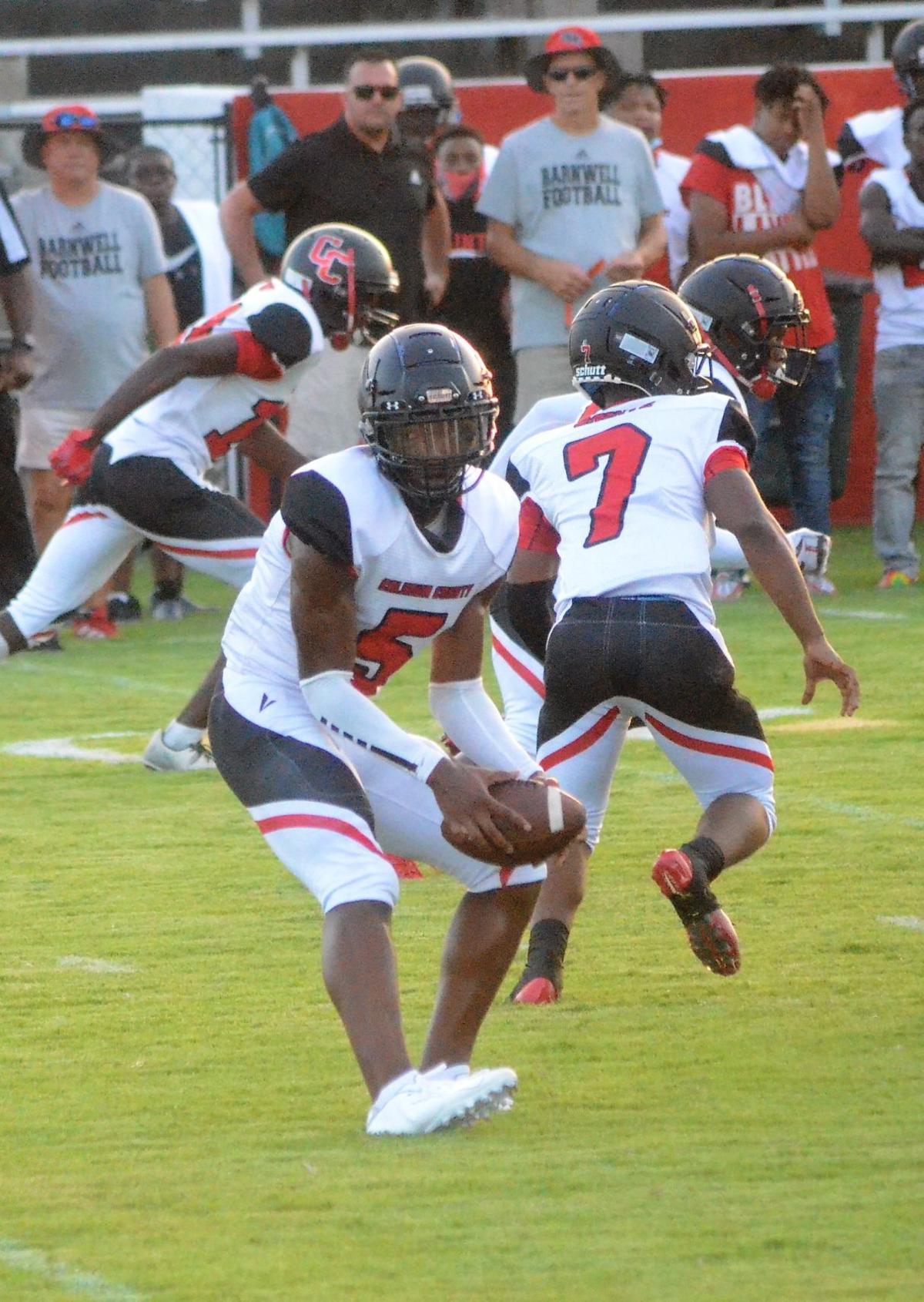 Calhoun County quarterback Russell Brunson readies to pitch during the first half of the Saints' game against Barnwell Thursday night. 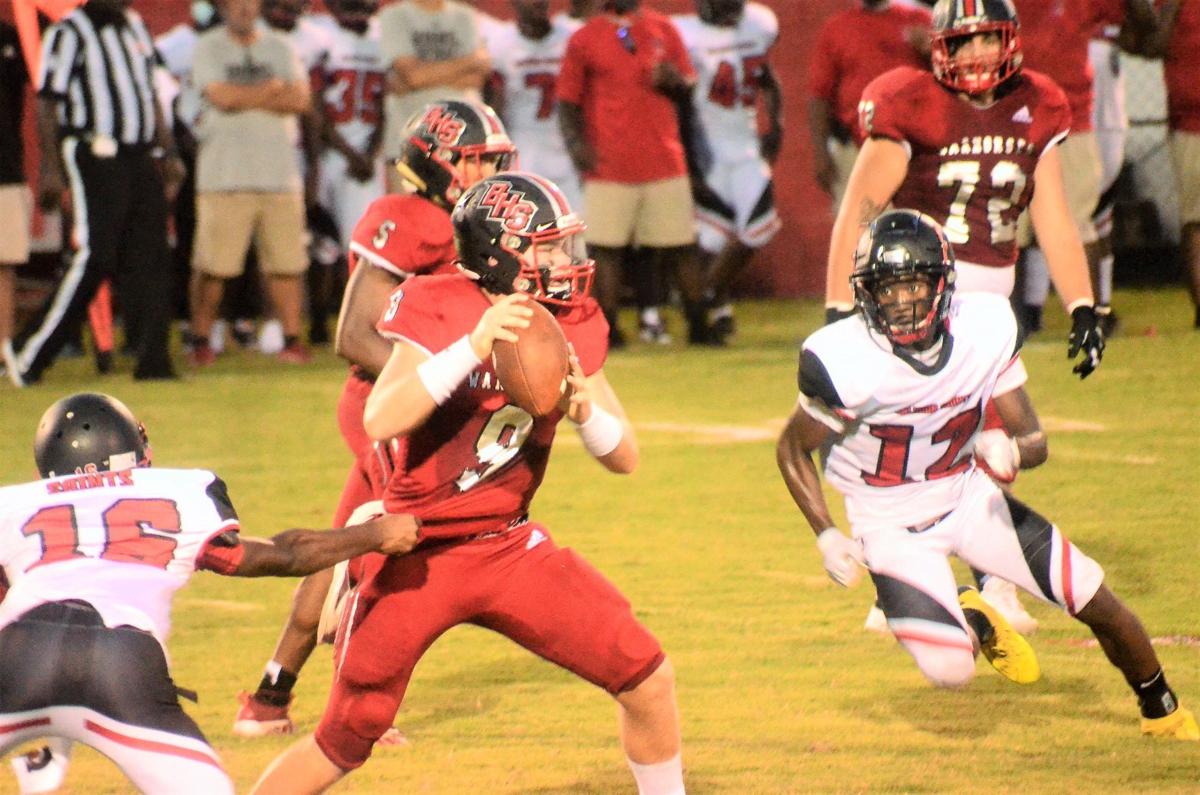 "It was like Christmas," Farmer told the members of the Orangeburg Touchdown Club Thursday prior to his team's matchup in Barnwell.

Thursday, the gift was under the Calhoun County tree as Hiram Stready Jr. intercepted a Barnwell pass late in the fourth quarter. The Saints scored on the ensuing drive to clinch a 26-15 victory.

"We got a win against a really good quality opponent," Farmer said. "We gave one away last week but we cleaned up the special teams and defense and played good football."

Barnwell entered Thursday's contest ranked No. 3 in Class 2A by the media members of the state.

Defensively, the Saints forced three turnovers, including an interception returned for touchdown by Jaquez Huggins on Barnwell's opening drive.

Stready's interception came after Barnwell looked to steal momentum. The Warhorses cut Calhoun County's lead to 20-15 and held the Saints to a three-and-out.

Barnwell took over in Calhoun County territory, but Stready was able to step in front of a pass and return it to the Barnwell 39 yard line.

"Stready is a big D-I prospect and he's a ballplayer," Farmer said. "I just like that we answered the call tonight. We came in, knew it would be a hostile environment. I just like the way we made big plays."

Despite the victory, Calhoun County did suffer a loss as Brunson was ejected from the game late in the fourth quarter. He will be unable to play in the Saints' next game scheduled against H-K-T/North.

Brunson finished the game with two touchdown passes and a touchdown run. Ahmir Smith added 97 yards rushing for the Saints.

Late in the fourth quarter, Calhoun County defensive lineman Hiram Stready Jr. intercepted Barnwell's Weston Sandifer and returned the ball to the Barnwell 39-yard line. The Saints scored on the ensuing drive to clinch the victory.

3 - Number of turnovers forced by Calhoun County, including two interceptions and a fumble recovery.

The Calhoun County defense and special teams gave up 54 points to Whale Branch last week. Head coach Wayne Farmer said the team challenged itself to play better. Farmer said his team showed up Thursday and it showed on the field.

"I like that we answered the call" -- Calhoun County head coach Wayne Farmer after his team's 26-15 victory over Barnwell.

IN PHOTOS: August 26 meeting of the Orangeburg Touchdown Club

Calhoun County's Jaivon Pondexter (20) looks to tackle Barnwell running back Mario Jones during the first half of the Saints' upset win over the Warhorses in Barnwell on Aug. 26.

Calhoun County quarterback Russell Brunson readies to pitch during the first half of the Saints' game against Barnwell Thursday night.