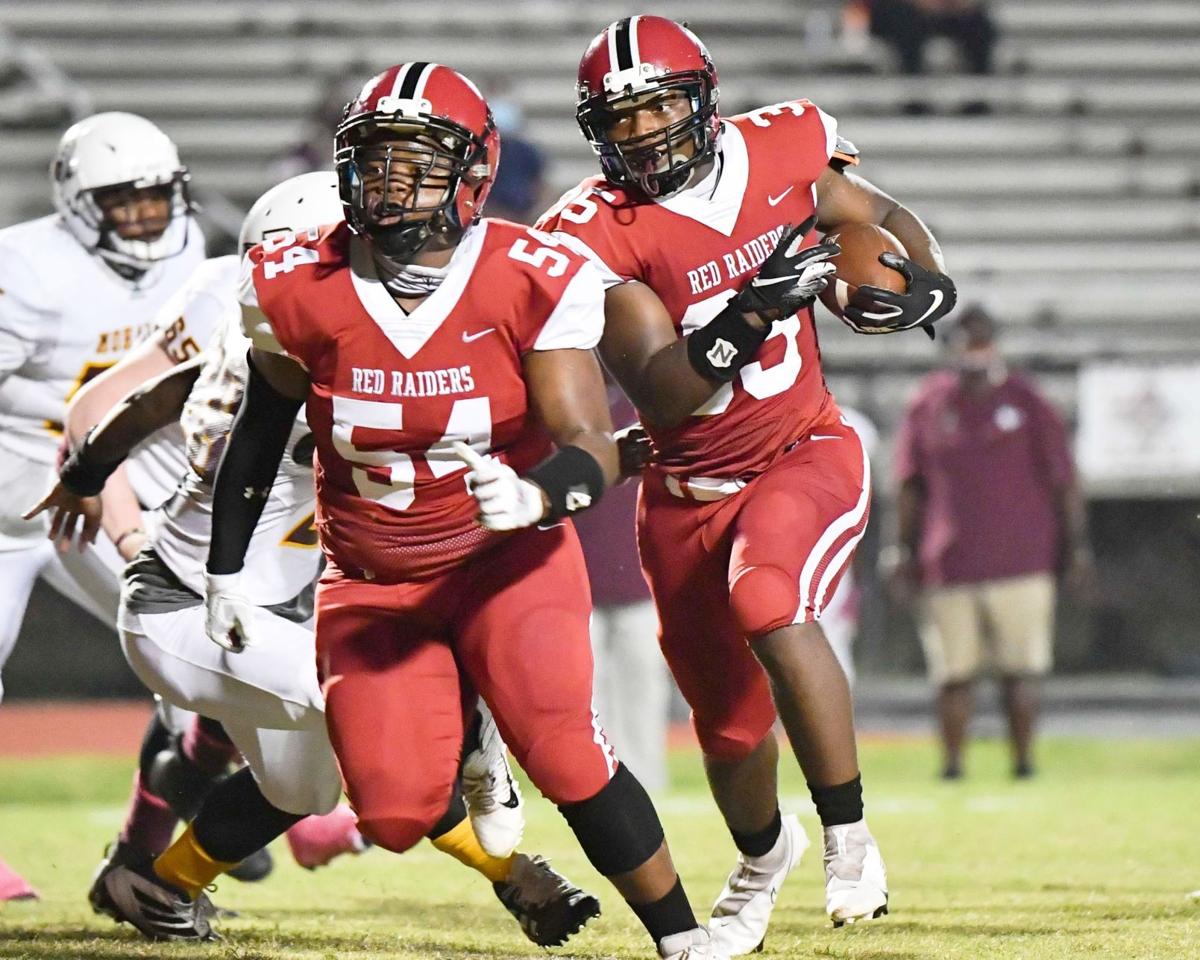 Bamberg-Ehrhardt running back Quintin Banks (35) rushes for a touchdown giving the Red Raiders a 7-0 lead over Bethune-Bowman in region play on Friday night. 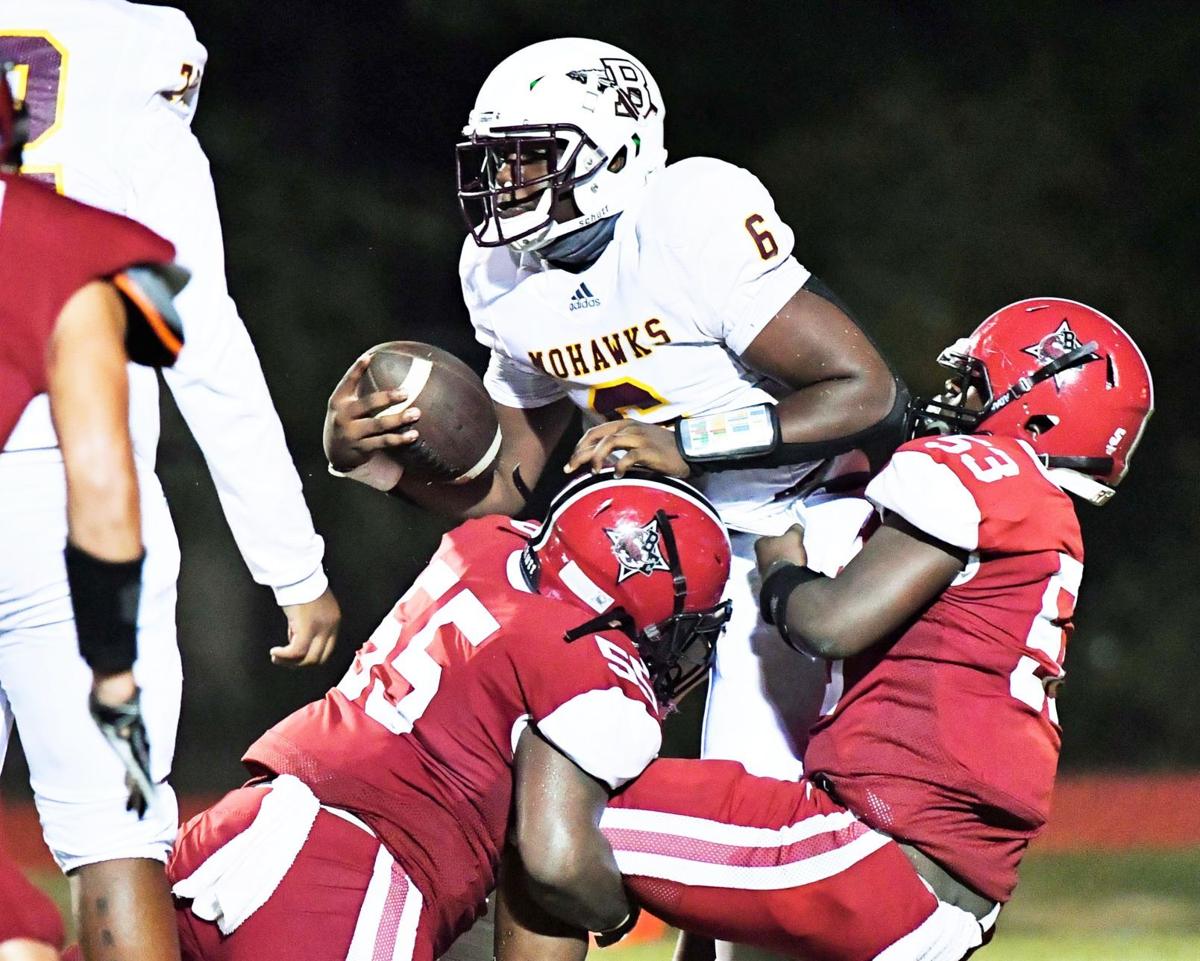 Jamie Downing (53) and Trayvon Jamison (55) of Bamberg-Ehrhardt get the quarterback sack on Bethune-Bowman's Trevon Davis during Friday's Red Raiders win.

BAMBERG — The Bamberg-Ehrhardt Red Raiders rushed their way to a 42-0 shutout victory over the Bethune-Bowman Mohawks on Friday in Region 6-A football.

The win gave the Red Raiders (3-0, 3-0 in region) their third victory of the season, while the Mohawks (0-2, 0-2 in region) are still searching for their first win.

“We executed well defensively, play hard, the O-Line blocked well, and our runners hung on to the ball," B-E Head Football Coach Robert Williams said. "Overall, I think we played a good game."

Williams said the rushing attack is the focal point of the Red Raider offense.

"And if we can’t run the ball, we’re going to be in trouble.”

Bamberg-Ehrhardt wasted no time putting points on the scoreboard. After the defense forced the Mohawks to punt, the Red Raider offense took the field and only needed three plays to reach the end zone.

The Red Raiders found the end zone again with just under 30 seconds left in the opening quarter. Quincy Bias carried the ball twice for 35 yards and capped off the two-play drive with a five-yard scoring rush. McIntosh’s kick was good, making the score 14-0.

B-E's defense forced a fumble on the first play of the Mohawks’ following drive. Ty’Quez Stuckey recovered the fumble, giving the Red Raiders the ball on the 25-yard line.

On the second play of the drive, Banks took the hand-off and carried a few Mohawk defenders with him on his way to the end zone. McIntosh’s kick was good, giving the Red Raiders a 21-0 lead with 11:48 left in the first half.

The Red Raiders extended their lead once again with 3:23 left in the first half. Quarterback Treyton Still capped off an 11-play drive with a seven-yard rushing score. McIntosh’s kick was good, making the score 28-0.

The Red Raiders scored the first points of the second half at the 2:00 mark of the third quarter. Still passed to Isiah Johnson in the flat, Johnson made two Mohawk defenders miss, and then ran 17 yards for a touchdown. McIntosh’s PAT was good, making the score 35-0.

The Red Raiders found the end zone again with two minutes left in the game. Nick Folk rushed six yards for a score, and McIntosh’s PAT was good for the 42-0 final tally.

Williams said his team will use the week to focus on improvements before their next game against the Allendale-Fairfax Tigers, who took a 42-0 non-region home win against Class 2A foe Edisto on Friday.

The winner of next Friday's game will be the lone region unbeaten team, with 3 non-region games (Great Falls, Barnwell and Edisto) left for B-E to prepare for Class A state playoffs in mid-November.

“We’ve just got to get better with little things, blocks here and there, wrapping up tackling, all that kind of stuff,” Williams said.

Friday was Senior Night for the Red Raiders football players and cheerleaders to be recognized.

Bamberg-Ehrhardt running back Quintin Banks (35) rushes for a touchdown giving the Red Raiders a 7-0 lead over Bethune-Bowman in region play on Friday night.

Jamie Downing (53) and Trayvon Jamison (55) of Bamberg-Ehrhardt get the quarterback sack on Bethune-Bowman's Trevon Davis during Friday's Red Raiders win.