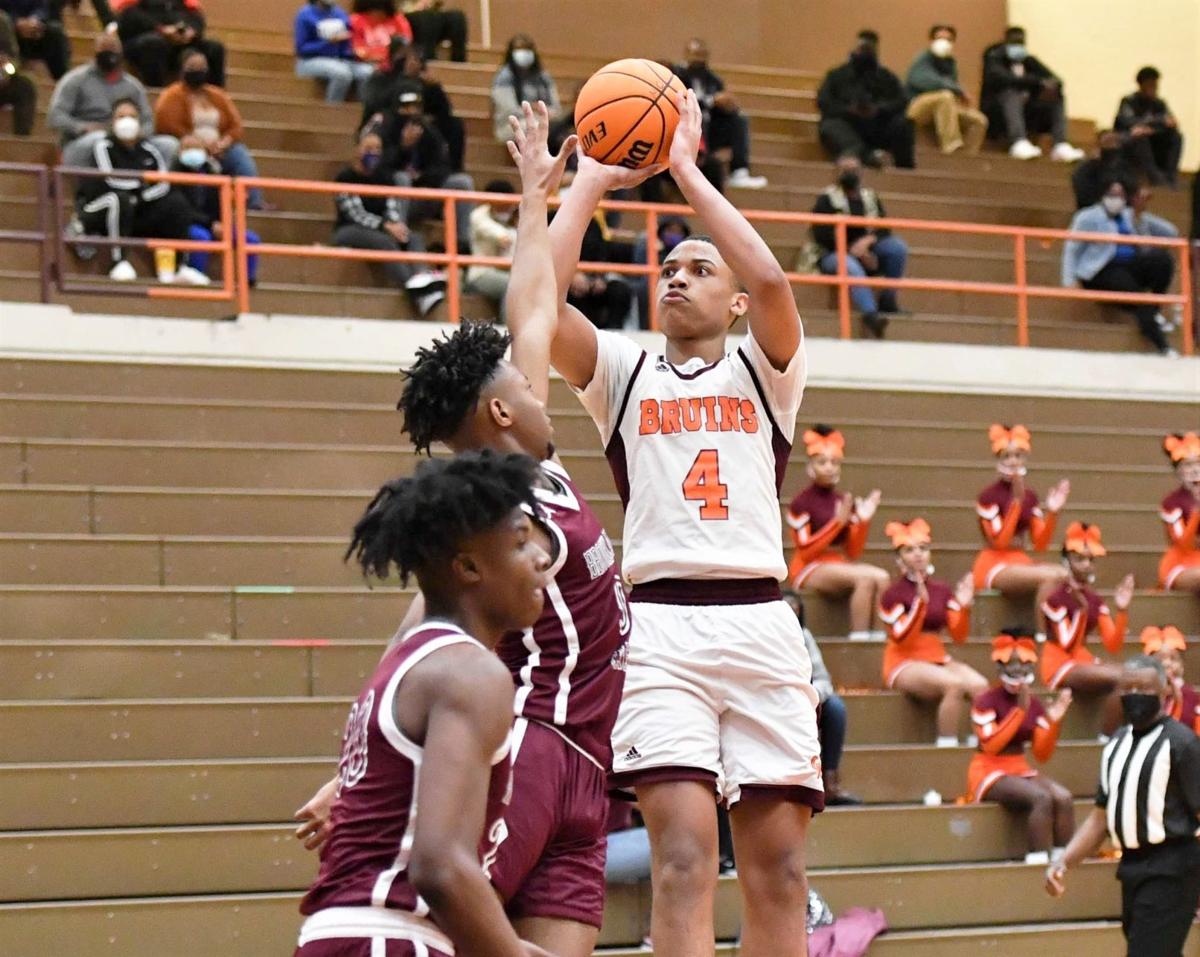 Bruins 6-foot-5 junior guard Jordan Simpson (4) goes up for two of his game-high 20 points in leading Orangeburg-Wilkinson to the Region 5-3A tournament title against Brookland-Cayce in Orangeburg on Wednesday night. 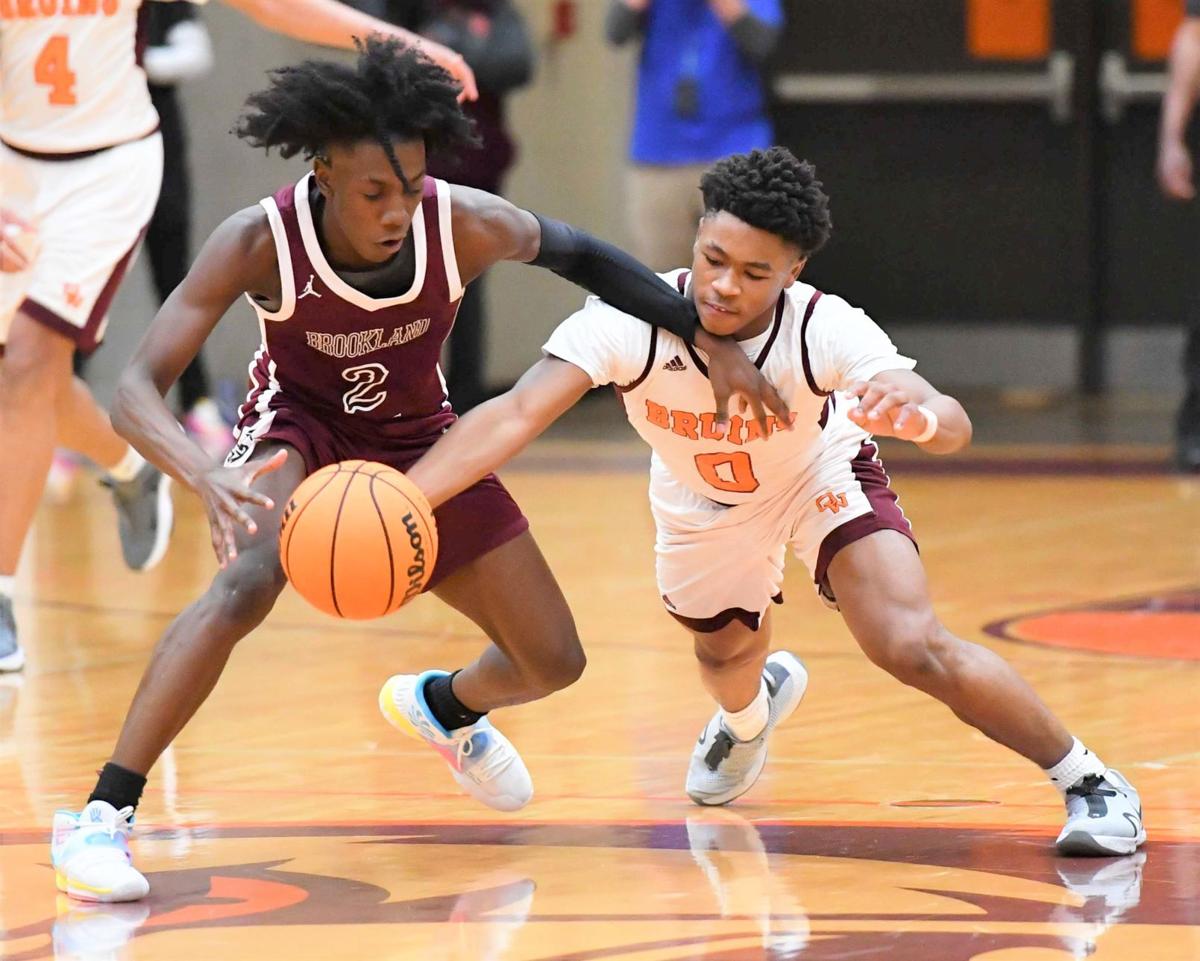 The Bruins Den at Orangeburg-Wilkinson proved very much intimidating Wednesday for visiting Brookland-Cayce in the varsity boys Region 5-3A tournament title game.

The host Bruins rolled to a 75-50 victory over the Bearcats to grab a No. 1 seed in the first round of Class 3A lower state playoffs.

Jordan Simpson scored 20 points, while Horace and Jeremiah Jacques and Larry Howell each had 15 points to lead the 8th-ranked Bruins (10-2 record) on Wednesday.

O-W will open Class 3A playoffs on Saturday at home at 6 p.m. against Lakewood, the No. 2 seed from Region 6.

The Bruins trailed 4-0 in the early minutes against B-C, but answered with a 17-0 run to take control of the game.

O-W’s pressure defense forced 29 turnovers and held Brookland-Cayce to just 6 field goals in the 1st half, leading to a 41-15 halftime advantage.

Simpson scored 6 straight points to open the second half, as the Bruins extended their lead to as much as 36 points.

Brookland-Cayce finished the 3rd quarter on a 14-0 run to close the gap to 53-31 entering the final quarter.

O-W’s lead dropped no lower than 19 points the rest of the way, as the home team outscored the Bearcats 24-19 in the final stanza.

The Orangeburg Prep Indians finished the regular season with a 67-49 victory over Northside Christian on Tuesday.

The Hillcrest Men's Golf Association will hold a tournament on Feb. 21 with a shotgun start at 10 a.m. at Hillcrest Golf Course.

The format is individual stroke play with handicap. Please call and sign up at Hillcrest by Saturday afternoon at 803-533-6030.

(AP) The NCAA Division I Council announced Wednesday it was extending the recruiting dead period for all sports through May 31, continuing a ban on in-person recruiting that has been in place since the coronavirus pandemic began last March.

The council said it will provide an update on a potential return to in-person recruiting no later than April 15, meaning there's a chance coaches will be able to attend events during the June and July live periods in men's and women's basketball.

With the dead period potentially ending in June, it will have been at least 14 months since there were official campus visits for prospects or in-person evaluations by coaches.

"After careful consideration of all available information, the Council agreed that an extension of the dead period through May 31 was necessary," council chair and Penn athletic director M. Grace Calhoun said in a statement. "However, there is a strong commitment to use the next several weeks to outline the transition plan back to recruiting activities post June 1 and to provide those plans to prospective student-athletes, their families and the NCAA membership no later than April 15."

For basketball, the announcement means there will be no in-person evaluation during the two scheduled April live periods.

On the football side, the evaluation period from April 15 through May 31 will be off-limits to coaches.

In Wednesday's announcement, the council also increased the number of hours football teams can spend on out-of-season activities from eight to 10 hours per week, including up to four hours per week for meetings and walk-throughs, and up to six hours per week of physical activities.

Is Sean Payton an early frontrunner for Coach of the Year?

Bruins 6-foot-5 junior guard Jordan Simpson (4) goes up for two of his game-high 20 points in leading Orangeburg-Wilkinson to the Region 5-3A tournament title against Brookland-Cayce in Orangeburg on Wednesday night.