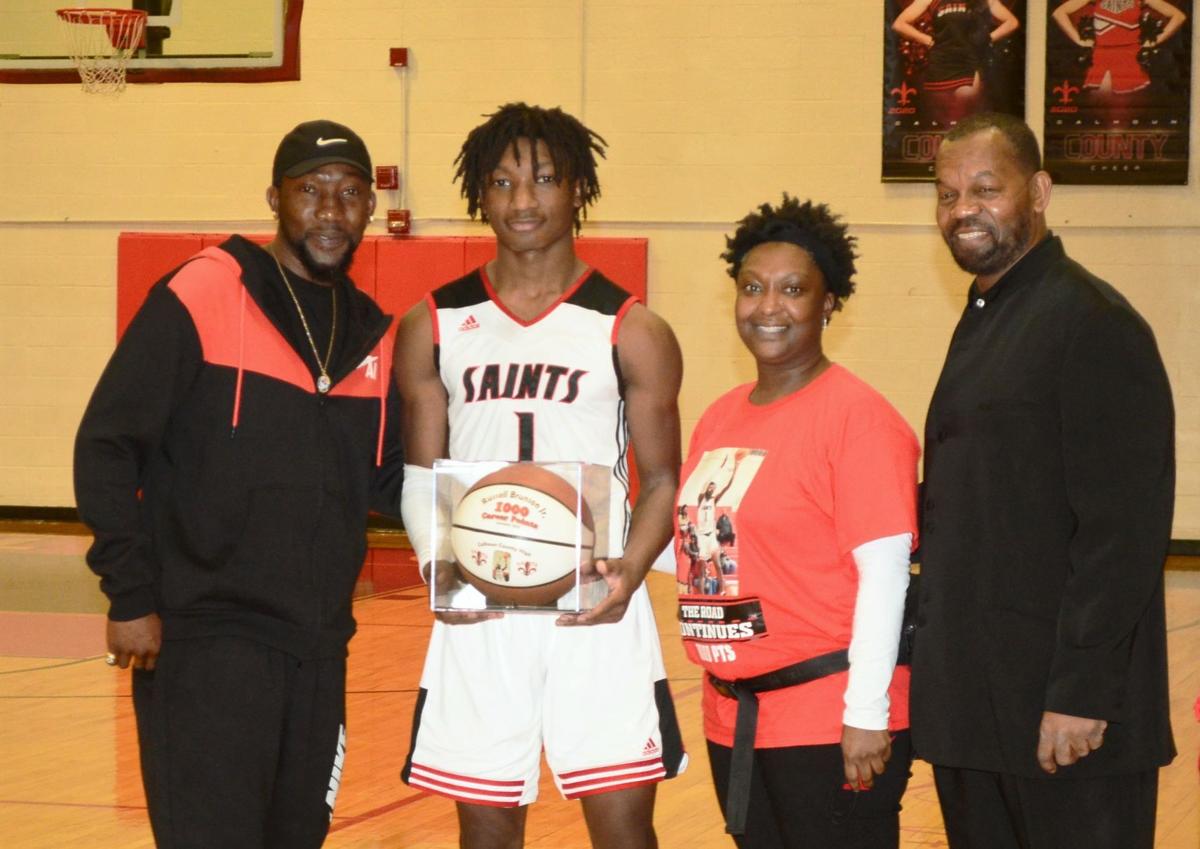 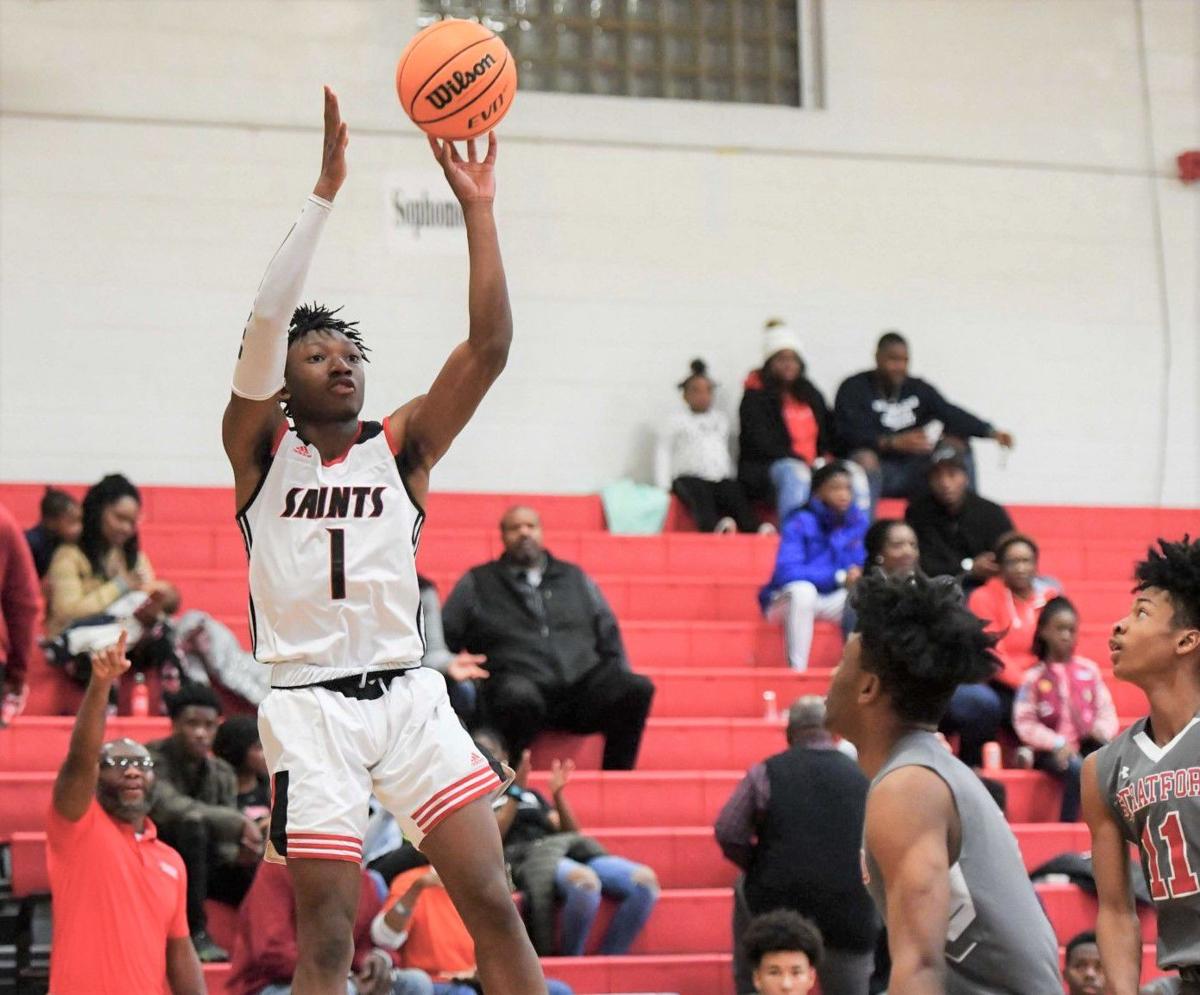 Russell Brunson Jr. of Calhoun County releases a jumpshot in a 2020 home game against Stratford in Orangeburg County Sweet Sixteen tournament play. As a junior for the Saints this season, Brunson recently surpassed 1,000 career points on varsity.

Many reach the milestone late in their senior season of play.

He did so in his junior season.

"This means everything to me, but it's going to keep going," Brunson said, having scored 22 points in Friday's 80-36 home region win against Williston-Elko. "The world is going to continue and we're going to keep trying to get to another championship.

"We're all focused on the same things on this team, winning a 'ship and earning a (college) scholarship. In our offense, I tell my teammates we all get a chance to get 30 (points) in a game. We all get enough shots and enough opportunities."

Brunson has been an impact player on the varsity level for quite a while. He averaged 22 points per game last season, with 11 games of 20 or more points, along with 10 games of 5 or more assists. This season, he is averaging 28 points, 8 assists and 6 rebounds per game.

"This year, I feel stronger in my mind and in my toughness," Brunson said. "Last year, and back into my 9th-grade year, I was more of a role player.

"Now, I feel like it's my team and I'm going to lead the team. I'm stronger, so I'm playing more aggressive on defense, playing both sides of the court."

Going into a region game at Wagener-Salley late last month, Brunson was told he needed 36 points to reach 1,000 for his career.

"In that game, I told my teammates not to doubt me, just keep passing me the ball and I would get it done," Brunson said. "I was just making shots, and I finished with a triple-double."

His 42 points in the contest put him over the milestone mark, while his 13 assists set up his teammates (including three who scored in double figures) in a 94-69 region road win.

"We are grateful for an opportunity to compete this season, so we are as happy as we can be," Fredrick said. "Even though we haven't been able to play many games, we've been working hard in practice. The starting corps has a lot of experience, and the younger guys we've brought up are working hard and playing their part well.

"I've had quite a few 1,000-point scorers, kids who can put points on the board, and Russ is the latest in that line. The good thing about that is that he's still got another year to go. We are looking forward to that. Of course, we don't run any offensive sets for anybody. We play a fast-paced game, which means there are a lot of opportunities to cash in. Russ is good at it, getting points inside and outside, he runs the break well and scores in a variety of ways. He has a fairly complete game, but he is still learning the game. We try to have fun when we play. I think it's a fun style of basketball and the kids enjoy it. We try to give our kids a chance to look good out there on the floor."

TheTandD.com is your ticket to news 24/7

Brunson has looked confident on the court in recent games. However, this school year has been quite a different one for him, in many ways. He began the fall attending and playing football for Gray Collegiate Academy, a public charter school in West Columbia. From his defensive back slot, he helped the War Eagles go 8-1 overall and 5-0 in winning the South Carolina High School League Region 3-2A title. GCA's lone loss was to eventual Class 2A state champion Abbeville.

Brunson's junior football highlights, including video of some of his interceptions and returns, were posted by GCA on MaxPreps.com recently. He accounted for 178 yards and 2 touchdowns on offense for the War Eagles, and showed the skills in the defensive backfield that should garner interest from college programs. He played several games with the GCA basketball team, the top-ranked SCHSL Class 2A team and defending state champion, before returning to play for the Saints.

Right now, for Brunson, the focus is Calhoun County basketball and helping coach Zam Fredrick lead the Saints toward the program's 10th state title. He returned to CCHS before the Saints took the floor for their first game of the season in January.

"When the season is over, everyone is going to see that I made the right decision to come back home and play," Brunson said. "We talk championship every day, and every day in practice we go hard, coming close to fighting, because we are all pushing to be our best.

"We know, when we get to playoffs, it's one game at a time. But we are only looking at the championship. We are putting all the selfishness aside and focused on the same thing. Sure, in a normal year, we'd love to play all our non-region games, including rivals like O-W. But as long as we can go to a championship, I don't care if we only played four regular-season games."

With a majority of the 2020 roster back this season, the Saints are 4-1 overall and 4-1 in Region 3A. Calhoun County went 20-7 last season, reaching the second round of the SCHSL Class 2A lower state playoffs.

This season, the Saints are playing on the SCHSL Class A level and dealing (like everyone else) with playing a shortened schedule of regular-season games, due to concerns with the coronavirus pandemic.

Brunson might not have a shot to eclipse the SCHSL all-time record of 3,481 career points posted by Zam Fredrick Jr. at Calhoun County, but he has a goal.

"I'm going to try to get 1,500 by the end of this season, and then go for 2,000 next season. We all work together and pass it to whoever is open to get the shot. I'd like to improve my outside shot. But, after a miss, I'm not going to stop to care about it. You have to have that endurance to play the whole game and not let misses get to you."

Russell Brunson Jr. of Calhoun County releases a jumpshot in a 2020 home game against Stratford in Orangeburg County Sweet Sixteen tournament play. As a junior for the Saints this season, Brunson recently surpassed 1,000 career points on varsity.