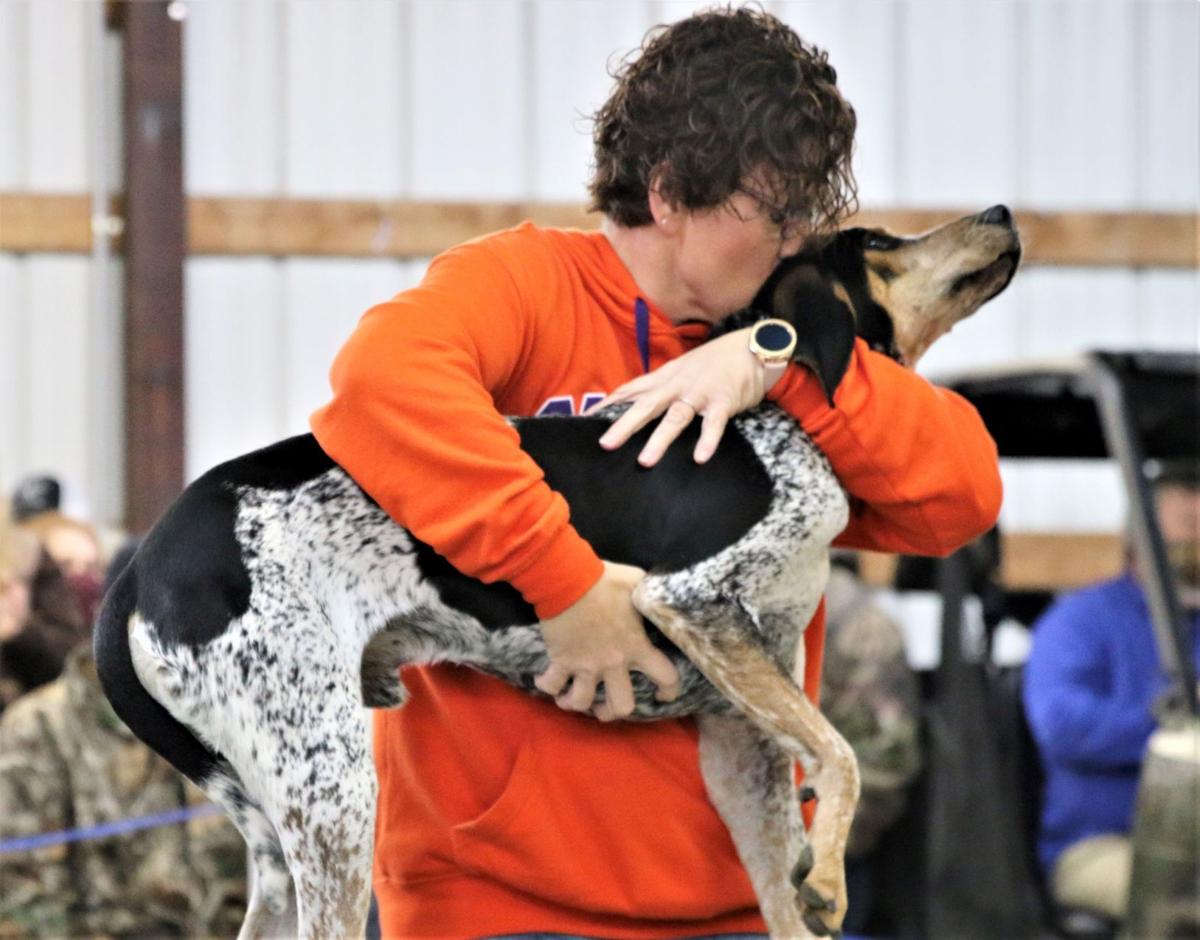 Lisa Beddingfield gives a hug to her dog, Melrose Mountain Blackberry Smoke, while participating in the Friday morning bench show at the Grand American Coon Hunt. Saturday's events at the Orangeburg County Fairgrounds include two bench shows, at 8 a.m. and 10 a.m., and a treeing contest at 1 p.m. More coverage at TheTandDcom. 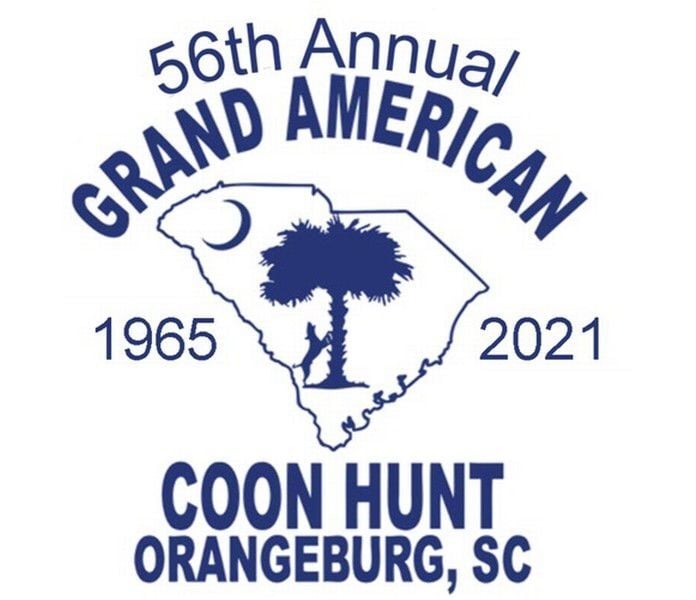 Why are there so many out-of-state trucks around town with dog boxes? The only plausible answer to the question is the annual Grand American Coon Hunt in Orangeburg.

For more than 50 years, Orangeburg has been host to the largest competition raccoon hunt in the world.

The Grand American brings thousands of visitors, hunters and prospective shoppers to Orangeburg County every year. Many of them are coon hunters. Some come to the fairgrounds to find a good deal on hunting apparel, and the rest come to find out why this huge crowd of people from all over the country travels here for one weekend every year. But what is all the hype about?

The Grand American is a competition coon hunt where people from numerous states come to compete to earn the coveted title of Grand American Champion. In order to win the title, you must win your cast either Friday or Saturday with one of the two highest scores and then win the final cast of the hunt. Don’t worry if you do not know what a cast is or how you accumulate points. This article aims to enlighten you about the event that brings millions of dollars to Orangeburg County year in and year out.

GRAND AMERICAN COON HUNT: How the event came to be

THE FINAL 4: How Danger won the 2020 Grand American crown

The United Kennel Club is a dog registry that recognizes breeds of dogs. Among those are the seven breeds that make up the coonhound group. UKC is also the kennel club that conducts the Grand American. Black and Tans, English Coonhounds, Redbones, Blueticks, Leopard Curs, Plott and Treeing Walkers are the seven recognized coonhound breeds that are eligible to compete at the Grand American. Each breed differs in there looks and hunting strengths and weaknesses. Some hunters are devout followers of one breed or another while some coon hunters feel that whatever dog is the best is the one they want to own, regardless of breed.

All the dogs that compete in the hunt are registered with UKC and the hunt is conducted under the Nite Hunt Rules of UKC. It may seem that this would be a sport that is easily understood, but there is actually a 115-page rulebook. Since the rulebook is far too complicated to explain in one article, let’s look at an overview of what will takes place.

All the dogs competing in the Grand American have been pre-entered through UKC. The dogs are drawn out into casts and dispersed to hunting grounds to compete for two hours. A cast is a group of four dogs that is drawn at random to compete against each other. There are three different classes of casts: Registered, Nite Champion and Grand Nite Champions. Registered dogs are those that have not gained any championship titles in UKC events. Nite Champion dogs are those that have accumulated at least 100 championship points and won a first place at a sanctioned competition hunt. Championship points are awarded at sanctioned hunts to dogs that win their casts.

Once the handlers of the dogs learn where they will be hunting and what other dogs are on their casts, they will disperse from the Orangeburg Fairgrounds to places all over the state. A judge for the cast is assigned at the fairgrounds. The judge is one of the handlers on the cast who plays an important role in the hunt because he must handle the scorecard and record the scores. But the judge’s vote counts no more than any other hunter. When a scoring situation arises, the cast votes and the majority rules. When the handlers and hounds reach their hunting grounds, the dogs will be released. The object of the hunt is to have the hounds begin barking and trail the raccoon to the tree and have the cast members score it accordingly. When a hound opens, this is considered “striking” because the dog has struck a track. The first dog to strike receives 100 points, second 75, third 50, and fourth 25. The dogs will smell the trail the coon has left and locate a tree. The first dog to “tree” receives 125 points, second 75, third 50, and fourth 25. A handler must be able to identify which of the four dogs is his or hers. Sometimes it can be challenging to identify one dog from another, but each handler usually knows his dog pretty well. Handlers can tell a difference in trailing and treeing because when a dog is on track it usually gives a bawling bark every now and then, but when it trees, the barks are generally much quicker and shorter.

Once the dogs have been declared struck and treed, the handlers can proceed to the tree to score it. The dogs can receive either plus, minus or circle points. Plus points are awarded if the coon can be seen in the tree. The dogs are minused if no coon is seen and the tree does not present any obvious place of refuge that the coon may be hiding in. Circle points are awarded when no coon is seen, but the coon may be hiding in a nest or inside a hole seen in the tree. So if a dog gets first strike and first tree and a coon is found in the tree, then that dog receives 225 plus points. After the two hours of hunting time has elapsed, the dog that has the most plus points wins the cast. There are many scoring variables that can arise during a cast, and that is why there is a rulebook; but this an overview of the general purpose of a cast.

The scorecard is returned to the fairgrounds after the hunt and the Master of Hounds reviews the scorecards to place the winners. To even be considered for placement in the final standings, a dog must win its cast. The top two scoring cast winners on Friday hunt against the top two scoring cast winners on Saturday in the Grand American Final 4. The overall winner of the hunt wins a monetary prize and numerous hunting products.

It is important to remember that while all this hunting takes place, no animals are harmed. There are no guns allowed and no raccoons can be killed. A dog can be scratched (eliminated from competition) for bothering game such as deer and opossums or doing things like chasing livestock. The coon hunters who travel to Orangeburg care a lot about their dogs and have a lot of money invested in them; they are not just reckless hunters who disrespect the land. Coon hound puppies can sell for prices as high as $1,000 and the best competition hounds can be sold for prices upwards of $10,000.

Now when you see those dog boxes and hunters around town in early January, you know why they are here.

Providence farmer Dean Hutto wrote this story in 2008 when he was a sophomore at Newberry College. He has been coon hunting since age 12 and had been competition hunting for six years at that time. He has successfully hunted dogs in the Grand American.

The annual Grand American Coon Hunt at the Orangeburg County Fairgrounds is one of the largest field dog trials in the United States.

A year ago, a dog and his owner/handler from the Pee Dee region of South Carolina took first-place honors in the Friday Nite Hunt of the Grand…

Heavy rain in recent weeks, and some throughout competition on Friday, left standing water and challenging conditions for coonhounds and their…

Lisa Beddingfield gives a hug to her dog, Melrose Mountain Blackberry Smoke, while participating in the Friday morning bench show at the Grand American Coon Hunt. Saturday's events at the Orangeburg County Fairgrounds include two bench shows, at 8 a.m. and 10 a.m., and a treeing contest at 1 p.m. More coverage at TheTandDcom.