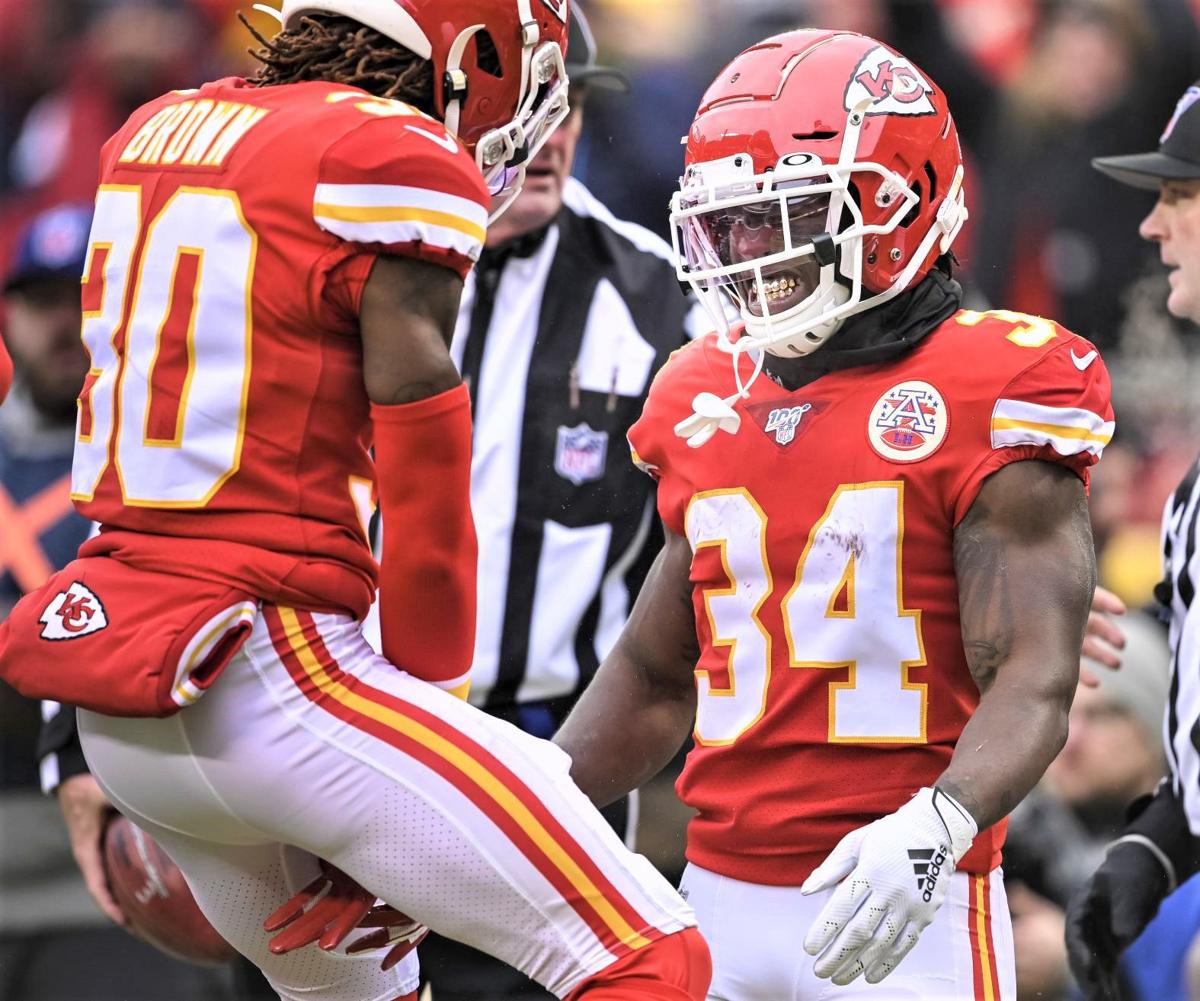 Kansas City Chiefs Darwin Thompson (34) is congratulated by cornerback Alex Brown (30) after recovering a fumble during the first half against the Houston Texans in Kansas City on Jan. 12. 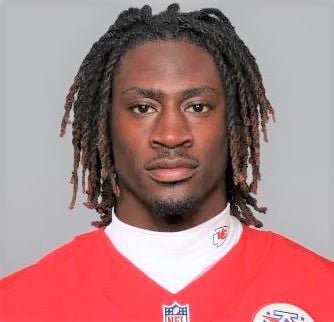 The NFL on Tuesday released the official list of 120 players who gave up college eligibility to enter the draft. Most, such as Tagovailoa, Young and Taylor, had made their intentions public.

Players less than four years removed from high school who have not completed a degree need to be granted special entry to the draft by the NFL.

Among the 120 are 16 players with college eligibility remaining who notified the NFL they had completed degree requirements and were therefore eligible to be selected in the April 23-25 draft to be held in Las Vegas.

The total of 120 players who left behind college eligibility to enter the draft is down from the record 132 last season. The 99 juniors granted early entry by the league is also down from 103 last year. A record 106 juniors entered the draft without completing degrees in 2018. That was the first year that number reached triple digits.

Since 2014, at least 95 underclassmen entered the draft without completing their degrees in every season but 2015, when the number was 74.

Defending national champion LSU had nine of the 120 players to leave college eligibility behind - the most of any school, including safety Grant Delpit, receiver Justin Jefferson and running back Clyde Edwards-Helaire.

Alabama was next with six players. Receiver Jerry Jeudy and tackle Jedrick Wills were among the Crimson Tide players joining Tagovailoa.

Taylor was one of 20 running backs who decided to enter the draft with eligibility remaining, though three star runners notably returned to school. Clemson's Travis Etienne, Alabama's Najee Harris and Oklahoma State's Chuba Hubbard, who led the nation in rushing last season, will be back in college next fall.

Former Lake Marion High School and South Carolina State University standout defensive back Alex Brown is getting the opportunity of a lifetime in his rookie NFL season.

After bouncing around the league in 2019, Brown in December found himself off the practice squad and on the field with future AFC champion Kansas City. Injuries in the secondary led to Brown getting a spot on the active roster.

He is the only player to have started the 2019 season with one team that just made the Super Bowl (the San Francisco 49ers), only to finish the season with the other team set to play for the title in Miami.

Brown originally entered the NFL as an undrafted free agent with the 49ers before being released in July. He was acquired on waivers by the Philadelphia Eagles in July and released in August. The New York Jets acquired Brown on waivers and then released him Aug. 31. He was signed to the Kansas City practice squad in September. He reportedly then ran plays on the Chiefs scout team as quarterback Lamar Jackson (expected to be NFL MVP for the season) in preparation for Kansas City's September 22 win against the Ravens.

According to reporting by Matt Derrick of si.com, Brown's chance came Dec. 5 when Kansas City defensive backs coach Sam Madison told him, "All right, it's your time."

The Chiefs promoted Brown to the active roster with injuries challenging their depth at cornerback. Morris Claiborne (shoulder) and former South Carolina standout Rashad Fenton (hamstring) had not practiced that week.

“It feels pretty good,” Brown said. “I've been working all my life for this, so I'm happy for the opportunity.”

“As a player I feel like I've developed mentally just watching my guys play and practice, especially press technique,” Brown told si.com. “Getting better and better each week, so I'm becoming a better player all around.”

After Madison delivered the news of his promotion, Brown grabbed his phone and called his mom, according to the si.com report.

“She was so excited, she's been waiting on this all her life,” Brown said. His dad was on the phone too, then he called his high school coach (current Edisto athletic director Chris Carter) and college coaches (Buddy Pough and other staff members) to let them know.

In his final season with S.C. State in 2018, Brown earned All-MEAC second team honors. The preseason All-MEAC selection finished third on the team in tackles his senior season with 42 (36 solo) stops, two tackles for loss, one sack, four interceptions for 50 yards worth of returns, eight pass breakups and 12 pass deflections.

Brown played on offense and defense for Lake Marion, completing his career in 2013 with the Gators making a second straight playoff appearance.  He rushed for 950 yards on just 54 carries as a senior.

Elon, Presbyterian, Georgia Southern and Charleston Southern offered Brown, but S.C. State turned out to be the best fit for him.

COLUMBIA -- With some shuffling to the Gamecock football staff this offseason, head coach Will Muschamp is set to shift his own position group…

DID YOU SEE? Former O-W basketball standout Riley retires from US Army

Paul "P.J." Riley was a standout basketball player when he graduated from Orangeburg-Wilkinson High School in 2002, ranked among the top 5 pla…

Kansas City Chiefs Darwin Thompson (34) is congratulated by cornerback Alex Brown (30) after recovering a fumble during the first half against the Houston Texans in Kansas City on Jan. 12.