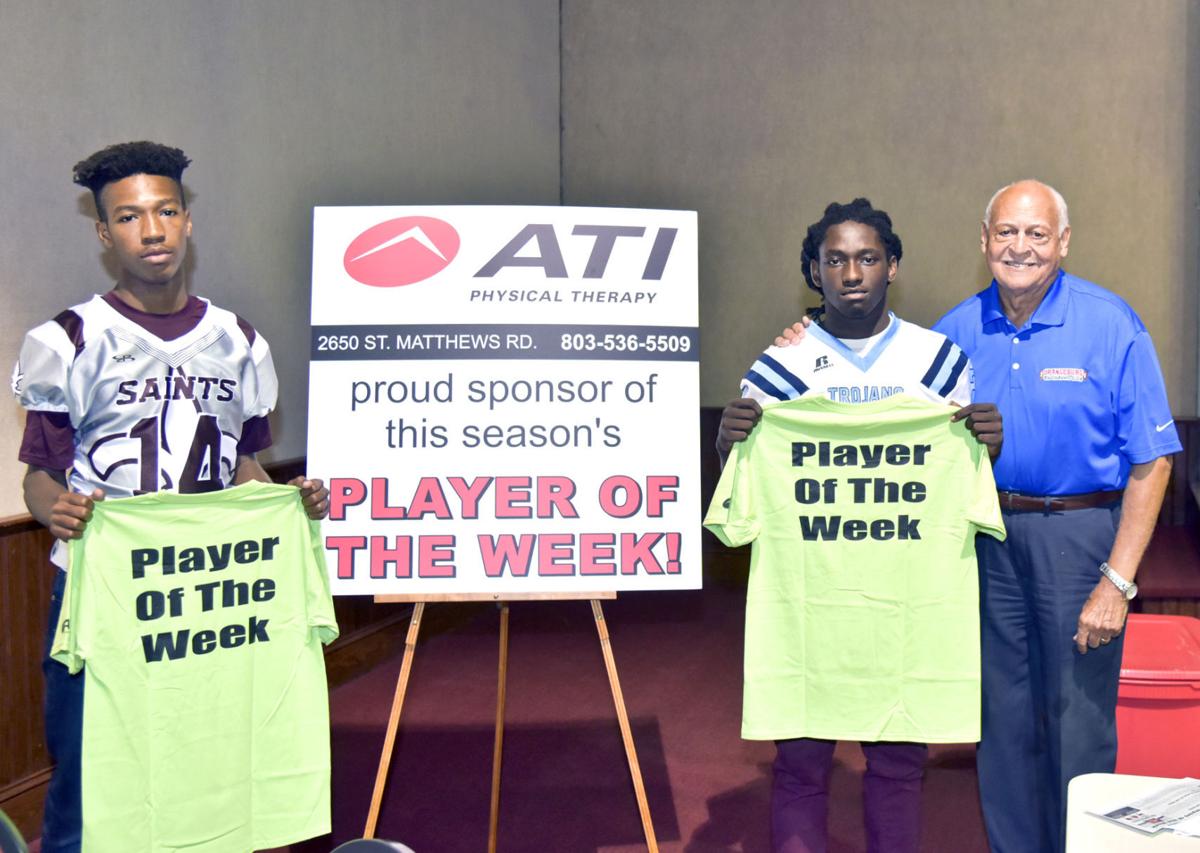 Clarendon Hall quarterback Zyan Gilmore, at left, and Hunter-Kinard-Tyler linebacker Keron Barr are presented as the Orangeburg Touchdown Club Players of the Week by host Willie Jeffries on Thursday. 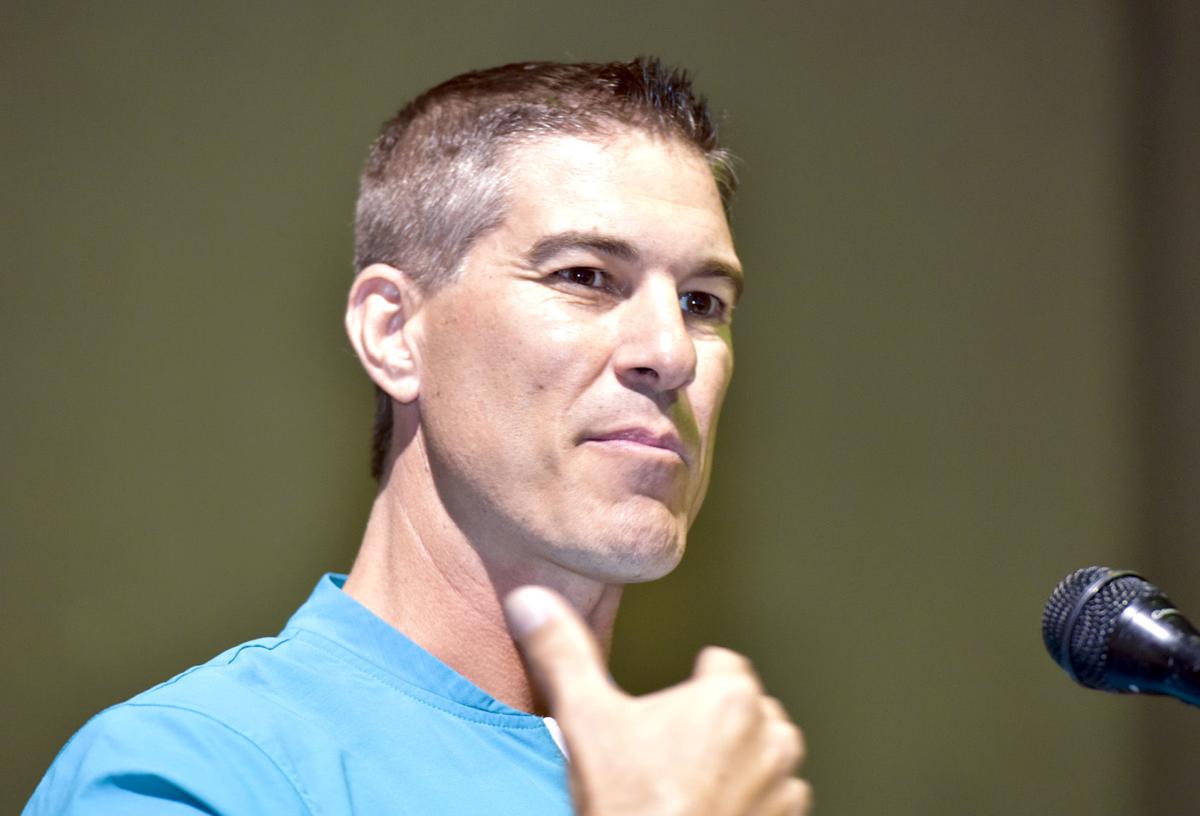 Jamey Chadwell, Coastal Carolina head football coach, was the speaker for the Oct. 3 meeting of the Orangeburg Touchdown Club inside The Cinema.

In a break from the norm, the South Carolina coast came to visit Orangeburg on Thursday, in a manner of speaking.

Chadwell brought a message of team-building for all ages, along with an update on how his Chanticleers team is faring through its early time in the Sun Belt Conference on the FBS level of NCAA Division I play.

Early in Thursday's meeting, South Carolina State head football coach Buddy Pough updated those in attendance on his Bulldogs. The team is coming off of back-to-back bye weeks and preparing to travel to begin Mid-Eastern Athletic Conference play at Delaware State on Saturday at 7 p.m. on ESPN3.

"I'm a little bit concerned about Delaware State," Pough said. "They seem to always give us a tough time up there.

"Delaware State really has struggled some. (North Carolina) A&T beat them 37-0 this past Thursday night. But, that means nothing to us. We've got to get in there and really get after those guys."

Pough then introduced Chadwell, whose team has had an up-and-down season, with the program's first win against a Power 5 conference program (12-7 over Les Miles' team at Kansas), but also this past Saturday's 56-37 Sun Belt Conference loss at Appalachian State.

"Everybody is a part of some team, whether it is family, a sports team or the business where you work with people," Chadwell said. "Several things make a great teammate and a great team member.

"At Coastal, we of course want to win. But it comes down individually to what kind of teammate are you? If you learn that lesson, I believe wholeheartedly that you will be a successful husband, father, employee, whatever it is you do, and you will make a significant impact in your community."

Chadwell then pointed out that a great teammate sets the example with their commitment to the team, uses their strengths to help the team become successful, shares positive energy and helps others improve, puts the team first and sacrifices for the betterment of the team, builds relationships to make memories, trusts and is trusted, is humble with a gracious attitude, and holds other teammates accountable.

"We ask our players to be selfish and make themselves the best players they can be, but at the same time be unselfish to make our team the best team," Chadwell said. "To do that, you must be positive. Either you are a germ or you are Vitamin C. You are either uplifting to people or you are bringing them down.

"You need to be the best for your team each and every day. Our standard at Coastal is B.E.S.T. - Belief, Effort, Sacrifice and Toughness. It has nothing to do with where you are from, who you are or how much money is in your pocket. It has to do with who you are on the inside.

Chadwell encouraged people from all walks of life to challenge themselves daily.

"Can you sacrifice and be tough to help yourself and the team, your family or your business?" he said. "Everybody, from a freshman to a head coach, from an employee to an owner, everybody has to be held to that standard.

As serious as Chadwell is about team-building and focus on a regular basis, he believes that teams should enjoy their time together, while they are making memories. That was obvious after the September 7 win at Kansas.

"Program-wise, that win brought us a lot of recognition from media all across the country, including Sports Illustrated and all those, probably because we had a pinata in the locker room too," Chadwell said. "From a personal standpoint, for me, it wasn't about winning a game against Les Miles, but more just being a part of a game he was a part of, that meant a lot.

"That win brought us as much notoriety or more than when our baseball team won the national championship, just because of all the eyes focused on football. We have Kansas coming to Conway next year, so come out and support us and hopefully we can beat them again."

Wofford head football coach Josh Conklin will be the guest speaker at the Thursday, Oct. 10 meeting of the Orangeburg Touchdown Club.

May River at Lake Marion

Sometimes it is better to just live in the moment.

Clarendon Hall quarterback Zyan Gilmore, at left, and Hunter-Kinard-Tyler linebacker Keron Barr are presented as the Orangeburg Touchdown Club Players of the Week by host Willie Jeffries on Thursday.

Jamey Chadwell, Coastal Carolina head football coach, was the speaker for the Oct. 3 meeting of the Orangeburg Touchdown Club inside The Cinema.