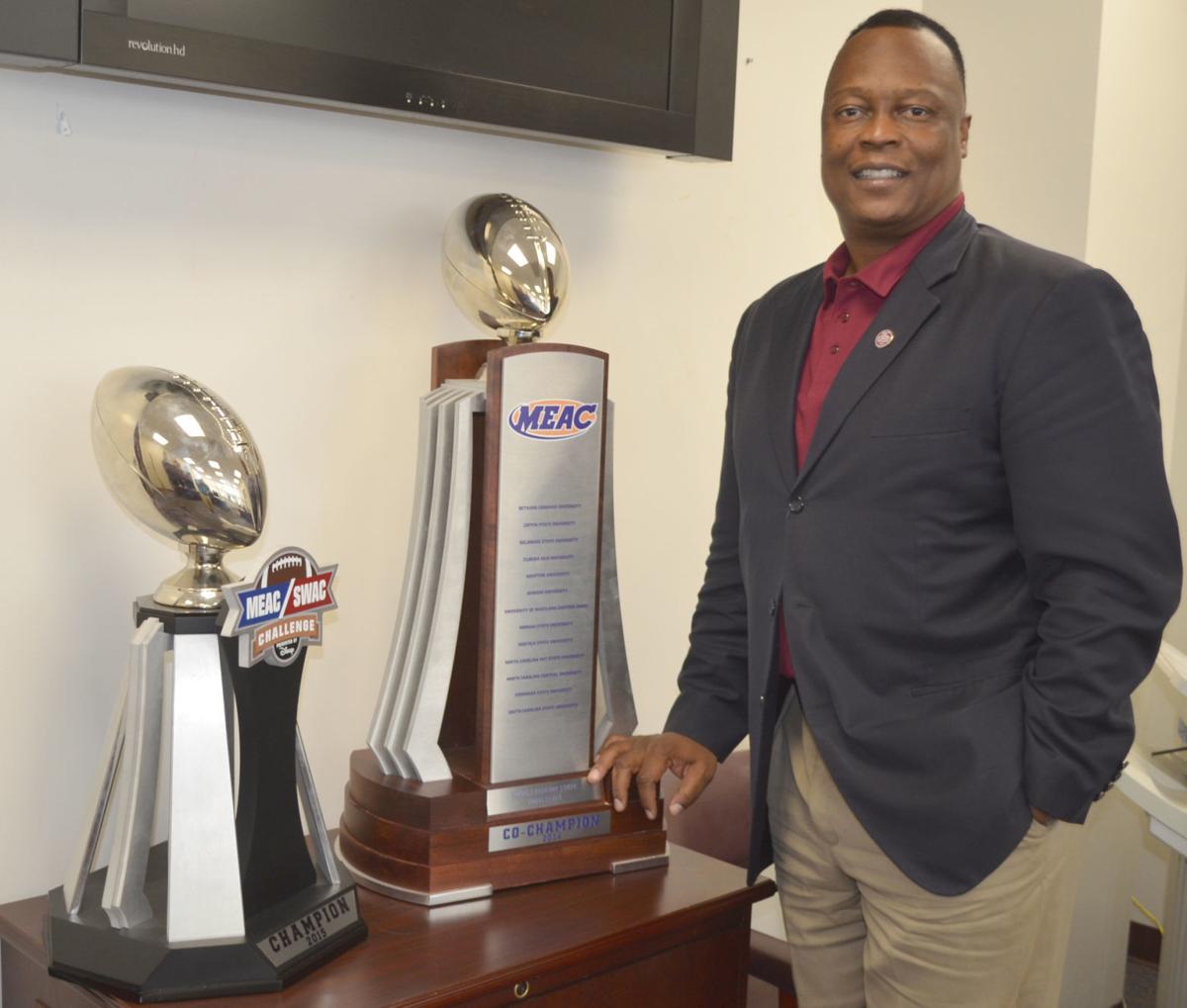 New South Carolina State athletic director Stacy Danley stands next to football trophies for the MEAC/SWAC Challenge championship from 2015 and the MEAC conference co-championship trophy from 2014, just outside of his office this past week. Danley understands the expectations for success in all sports at S.C  State and plans to facilitate the best opportunities for all Bulldogs coaches to recruit quality student-athletes and improve the program. 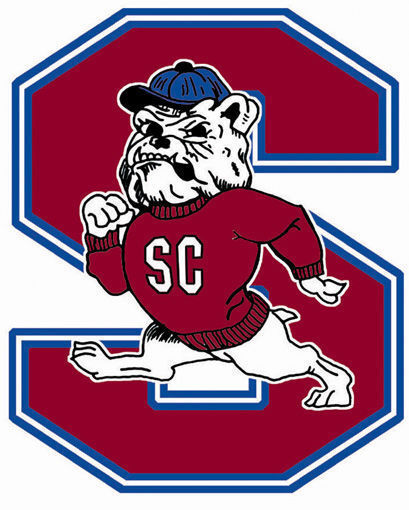 Stacy Danley has never been one to back down from a challenge.

He was the first All-SEC tailback to have a four-year career leading the Auburn University football team’s offense after all-time great Bo Jackson left for the NFL.

On campus in his new position for two months now, Danley has registered his ongoing challenge to have athletic teams that Bulldogs alumni can be proud of, while also balancing a depleted budget at an FCS-level NCAA Division I HBCU program.

“The first thing I noticed was the legacy and the history of this program, which built a very strong foundation,” said Danley this week of S.C. State athletics. “Whenever you are trying to build on something, you need that strong foundation.

“South Carolina State University, and specifically the athletic department, has a very strong legacy. When you think about the championships this program has been able to achieve over the years, and the legendary coaches… the alumni, with three pro football hall of famers, and one NFL Pro Bowler on the school board; couple all that with the leadership from President (James E.) Clark, and the business acumen he brings to the table, it gives the legitimacy that every institution is looking for and working toward. I think the sky is the limit here at S.C. State.”

Danley, who played at Auburn from 1987-90 and has 21 years of experience in athletics administration, previously served as associate athletic director at Auburn, and as athletic director at Alabama State and Tuskegee. Tuskegee is a Division II school, while Alabama State (like S.C. State) is an HBCU that is an FCS program. He has also worked for the J.F. Smith Group and the Southeastern Conference.

“Over the past two months, I’ve been able to interact with the coaches and staff we have in place here,” Danley said. “And there’s no question that we have the right people in our program.

“We just have to be able to provide a few more resources to them. I hope that they sense that they have my full support and I’m excited to see them go out and prepare and develop our student-athletes. Now we just have to pull together and go out there and get it done.”

“At the end of the day, we are educators; we educate and graduate young people,” Danley said. “Athletics is just a means to an education in college.

“I’m excited that our coaches value that to the point where they haven’t allowed a little adversity of cutting of some funding to drop the ball with academic achievement.”

Some of that adversity and cutting of funding led to the April announcement that there will be a suspension of the women's tennis program as of the 2017-18 school year. That announcement came less than two years after the dedication of the new Hardeep Judge Tennis Center on campus, and less than two weeks before the women's tennis team won its second consecutive MEAC Championship.

To meet the NCAA Division I requirements of offering enough sports opportunities for women, S.C. State announced at the same time it would be reinstating women’s golf, a program that was suspended in 2014 in an earlier round of budget cuts.

Other recognized adversity and cutting of funding has impacted the storied Bulldogs football program – the only in-state program with former players in the Pro Football Hall of Fame. Head coach Buddy Pough went so far as to schedule three “money” games for his team last season, taking blowout losses at Central Florida, Clemson and Louisiana Tech in exchange for three big paydays for the athletic department. Then, on National Signing Day this year, Pough signed an entire class of Palmetto State players, saving the program from giving a single out-of-state scholarship where costs are higher.

“I think right now, as we continue to become more and more healthy, financially, I think you’ll see a lot of restrictions across the campus go away,” Danley said. “But, until then, we all have to tighten our (fiscal) belts and find a way to get it done, win and be successful.

“An old coach of mine used to say the mark of a true champion is how you handle adversity. Our coaches have said that we can’t allow this to stop us; we just have to be a little more creative. I applaud our coaches for making those adjustments; but I look forward to us getting back to a point where there are no restrictions, not just in athletics, but across the campus. We want to see President Clark’s vision become reality, that of financial health for the entire university.”

President Clark was pleased to welcome Danley to Orangeburg as part of the ongoing process of improving things at S.C. State.

“With his many years of experience in athletics administration, marketing and fundraising, I believe Mr. Danley is poised to enhance the S.C. State athletics program as a member of the senior leadership team of this university,” Clark said in a school release in April.

Danley spent the past two years working with the SLD Sports Marketing Group. Now he is busy working to market the S.C. State athletic department to possible future Bulldog student-athletes and to the public as a whole.

“We want to graduate our student-athletes and win championship,” Danley said. “The success of this program is going to be measured in how we perform in four key areas – athletics, academics, compliance and fiscal responsibility.

“They are all interlinked together and our goal is to perform extremely high in all areas.”

As Danley continues to look for new streams of revenue to bolster the Bulldogs athletic program – all the while encouraging people to engage with the school and invest in young people — he hopes alumni and the considerable S.C. State fan base enjoys the product the program puts on the field and court.

With six home football games scheduled for this fall, the Bulldogs’ most visible sport will be a good meter of how the 2017-18 athletic schedule will be supported.

“Hopefully, we can get off to a good start, engage our fans and get them excited about the product that we are putting on the field,” Danley said. “I know I’m excited, looking forward to having the chance to experience the game day experience here at South Carolina State.

“From what I can tell, it’s a very enthusiastic environment, both for our students and our fans.”

Danley and his wife, Stephanie, have three children: Lawson, Trace and Landon.

Will Spiers ready for sixth season with Tigers

CLEMSON – Clemson punter Will Spiers is returning for his sixth season.

The Orangeburg-Wilkinson varsity basketball teams garnered quite a lot of respect for their play this season in Region 5-3A competition.

Deion Sanders and Jackson State had quite the day on Sunday after the game. Never mind the 53-0 blowout victory in his debut, it was what was …

With Clemson's spring ball starting on Wednesday, Clemson247 looks at some questions regarding team personnel.

New South Carolina State athletic director Stacy Danley stands next to football trophies for the MEAC/SWAC Challenge championship from 2015 and the MEAC conference co-championship trophy from 2014, just outside of his office this past week. Danley understands the expectations for success in all sports at S.C  State and plans to facilitate the best opportunities for all Bulldogs coaches to recruit quality student-athletes and improve the program.