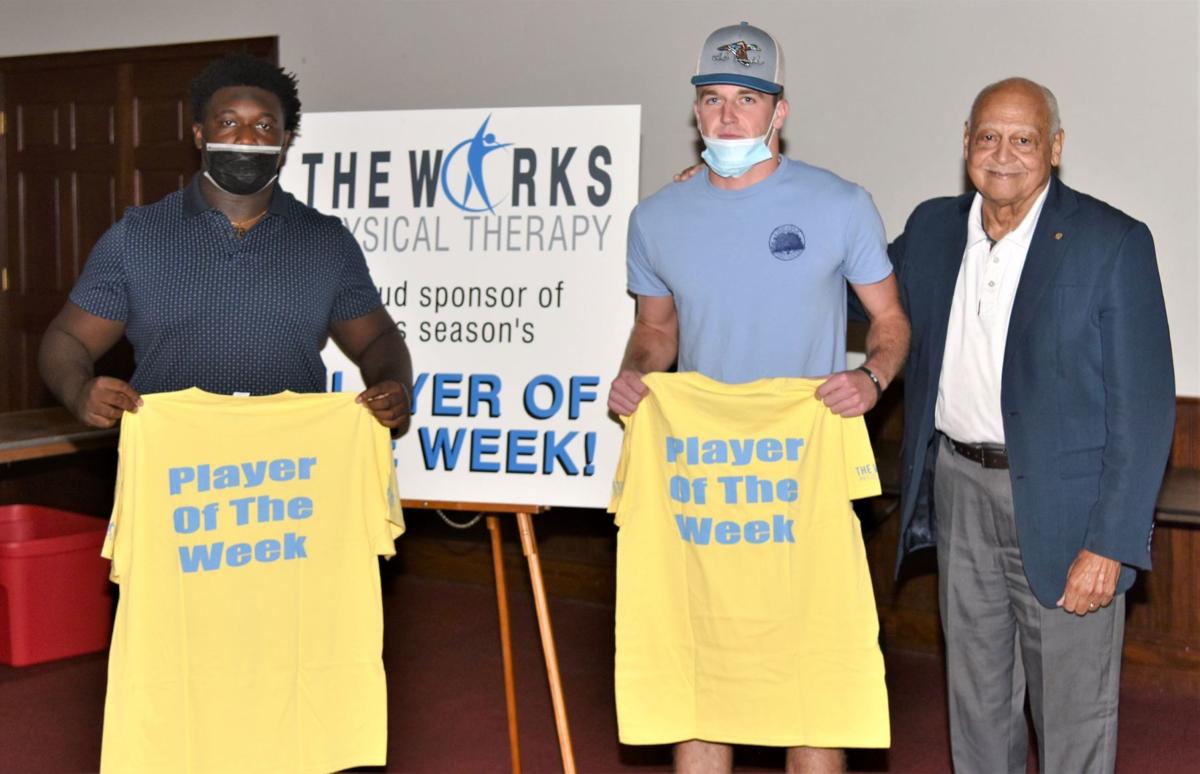 The Orangeburg Touchdown players of the week are Lyndon Glover, left, of Calhoun County on defense and Carson Cone, center, of Andrew Jackson Academy on offense. Presenting the honor is S.C. State Coach Emeritus Willie Jeffries. 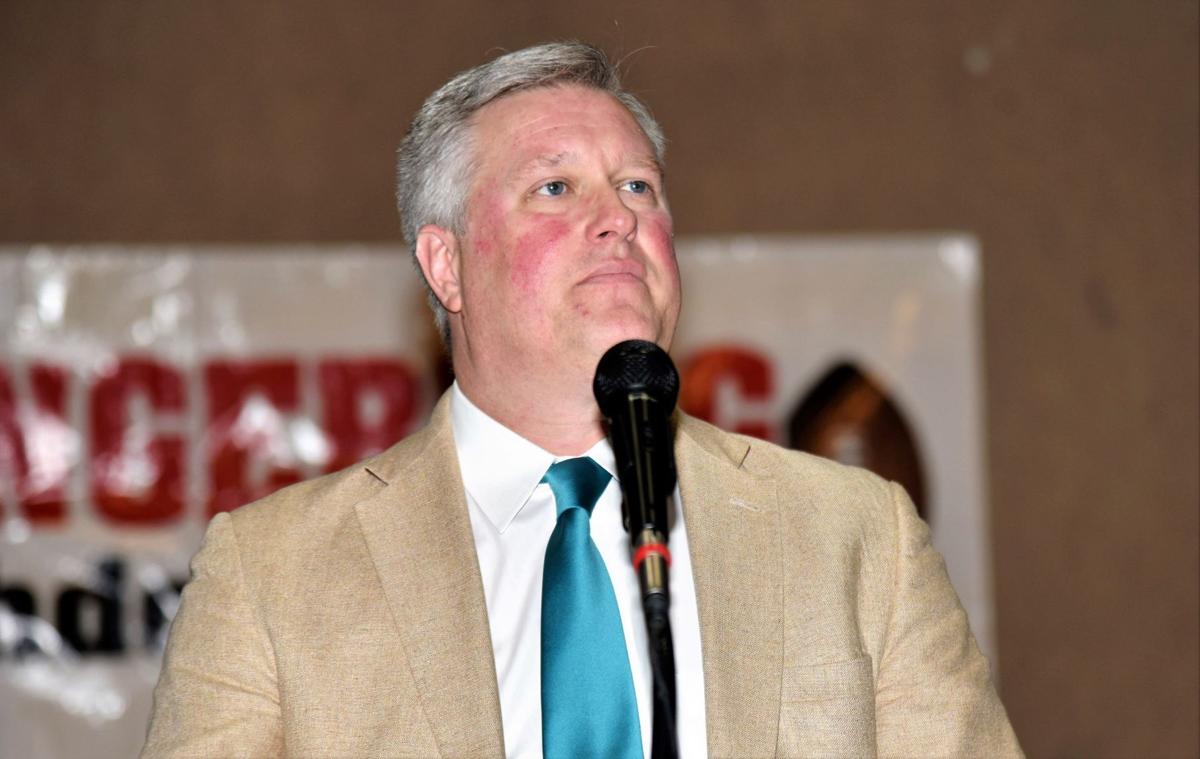 “Sept. 6, 2003, we beat Newberry College on a last-second play,” Hogue said. “Little did we know, as the goal posts came down that night at Brooks Stadium, that we would be in the position we are today. It’s been a remarkable journey.”

Hogue, who is the vice president of intercollegiate athletics and university recreation at Coastal, shared that journey with the Orangeburg Touchdown Club Thursday.

“We started with a vision,” Hogue said. “We wanted to be successful and win, but also provide opportunities for young men to create a great program. It started two years before we played our first game, but everyone in our administration has always been 100% committed to the program.”

As an FCS school, Coastal advanced to the playoffs in 2006 and 2010 before going four consecutive years from 2012-15. That’s when the school decided to make the jump to the FBS level.

“We decided to jump start that vision into high gear,” Hogue said. “We had an invitation from the Sun Belt Conference, so we began the process of moving all of our athletics to the next level, but we had our obstacles.”

Hogue said there were a lot of detractors that advised the school to stay in its place.

“There were questions of whether we could do this, and to be honest, you have all the confidence in the world but you don’t really know until you embark on something like this. We pushed forward, with great leadership from our athletic staff, president and board of trustees.”

Coastal was forced to go through a two-year transition period that made it ineligible for either the FCS playoffs or an FBS bowl game. Hogue said the school used that time to build the program for the future.

“It’s not something you can just jump right into,” Hogue said. “In 2016, our record was 10-2, but we could not go to the playoffs. That next year was our first in FBS competition. We opened the year with a win over UMass, but then started to struggle.”

The Chanticleers went 3-9, as current head coach Jamey Chadwell was named interim when head coach Joe Moglia had to resign due to health issues.

“We earned our first Sun Belt victory in Moscow, Idaho,” Hogue said. “We defeated the University of Idaho 13-7 in a hard-fought game. Afterwards, I found Jamey and he hands me the game ball for our first conference win, and I told them this would be the first of many.”

“We have everything set up for the spring of 2020, the year we positioned to take the next step, and here comes the COVID pandemic,” Hogue said. “It was day after day of uncertainty, we had no idea what we could do as a program, or if we would even play football.”

Hogue said the two weeks leading up to the first game, he was receiving nearly 20 calls and emails per day from other schools trying to schedule games.

“We took it slow,” Hogue said. “We decided not to play the first week but had a game scheduled with Kansas where they would travel to play us. The Big 12 would only allow Kansas one non-conference game and it had to be at home, so we made the switch and traveled to Lawrence.”

Hogue said it was eerie watching Coastal play a game with no one in the stands, but the Chanticleers defeated the Jayhawks 38-23.

“Things just kept clicking and over the next three weeks you could see everything coming together like we planned five years ago when we joined the FBS,” Hogue said.

As the Chanticleers continued to win, more of the national media began to respond. ESPN was set to bring its signature college football show College GameDay to Conway for a matchup between Coastal and Liberty.

“Liberty’s AD calls on Wednesday and says they will not be able to play due to COVID,” Hogue said. “We went to work in the moment just trying to solve a problem and by the end of the night, we had an agreement with BYU. It was the culmination of that five-year term, it was a vision that had been realized.”

According to Hogue, last season’s run not only put a spotlight on the football program, but on Coastal Carolina University as a whole. With over 10,500 students, Hogue said the school had a record enrollment of freshmen this fall.

“A major reason for the increase is because of what our team was doing and promoting the university,” Hogue said. “You couldn’t tour campuses last year due to COVID, so everything was absorbed virtually, and our team hitting at the right time correlates to driving that enrollment. It’s a great testament to how athletics can raise a university not just on the field.”

The Touchdown Club also recognized its Offensive and Defensive Players of the Week sponsored by The Works Physical Therapy.

Denmark-Olar (4-2) is averaging nearly 50 points per game this season thanks to the offensive trio of T.J. Williams, Keithan Washington and Ch…

The Orangeburg Touchdown players of the week are Lyndon Glover, left, of Calhoun County on defense and Carson Cone, center, of Andrew Jackson Academy on offense. Presenting the honor is S.C. State Coach Emeritus Willie Jeffries.