Meyer: Lawrence is 'guy that loves football'
0 comments
Share this
{{featured_button_text}}
1 of 2 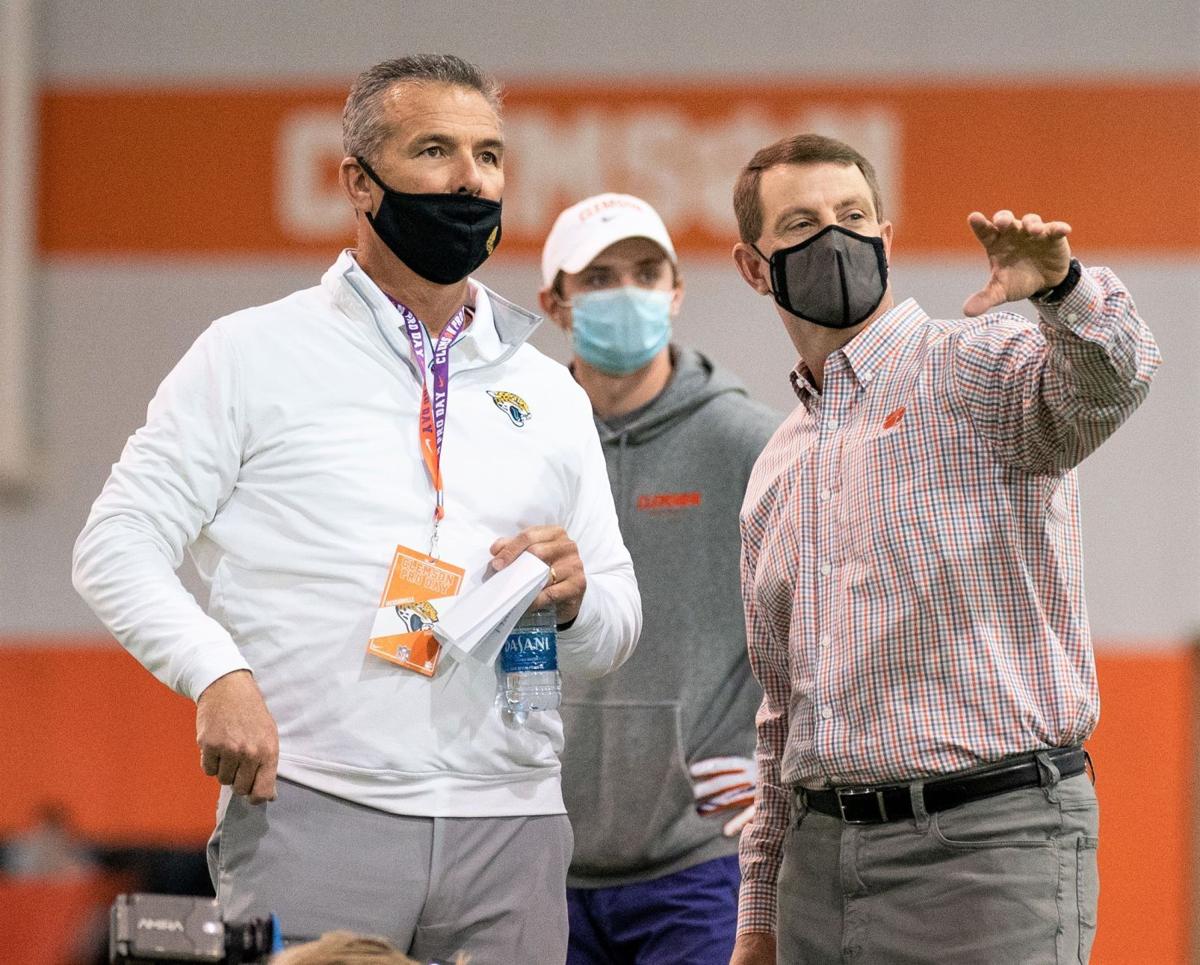 Urban Meyer of the Jacksonville Jaguars (left) and Dabo Swinney of Clemson look on as Trevor Lawrence works out Friday in Clemson. 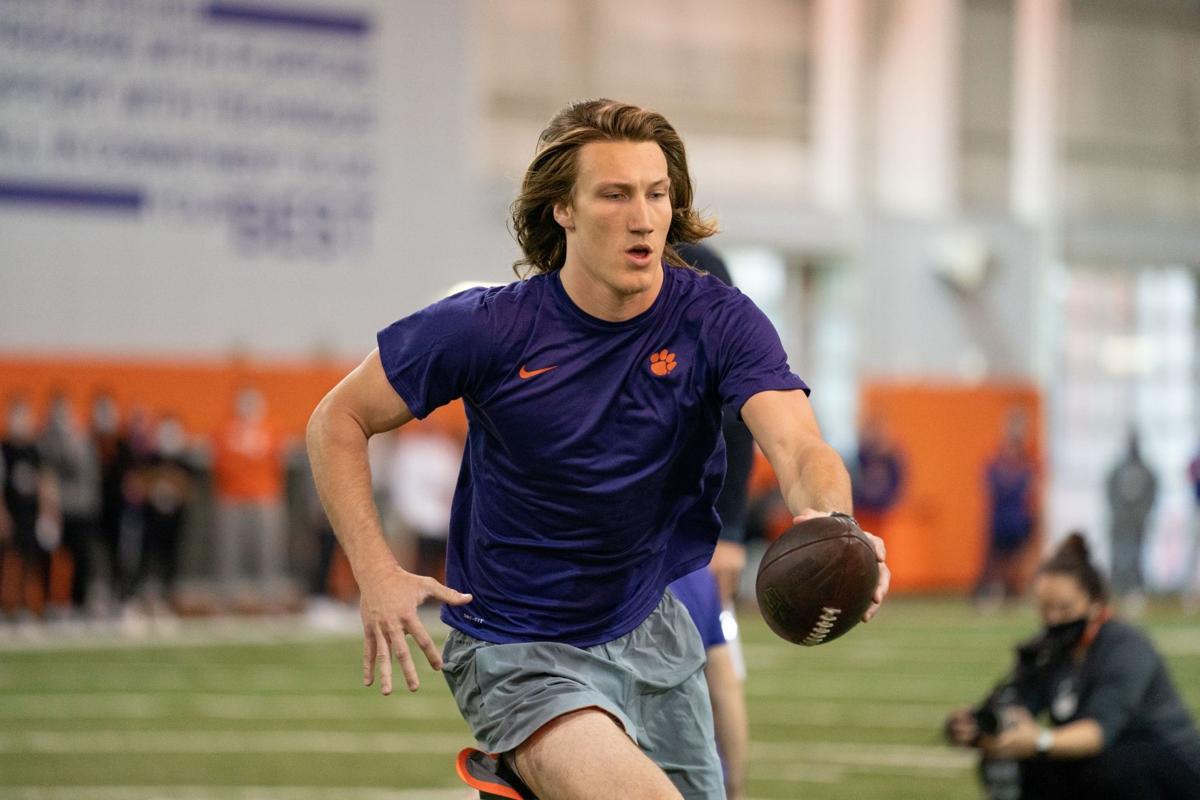 Clemson quarterback Trevor Lawrence worked out Friday for several NFL personnel including his expected future pro coach, Urban Meyer of the Jacksonville Jaguars. The national championship winner is projected as the No. 1 overall pick in April's NFL draft, the spot held by the Jaguars.

Football's worst-kept secret hit its highest point during Trevor Lawrence's Pro Day performance in front of Urban Meyer and other Jacksonville Jaguars' decision-makers on Feb. 12 after the projected No. 1 overall pick dazzled during a throwing session.

Jacksonville has its pick of several top-end quarterbacks in a few months, but all signs are pointing toward the franchise selecting the Clemson star and building the future around his arm.

Lawrence, who at the time was planning to undergo surgery on his shoulder, was asked by Meyer to show off his talent a bit prior to his procedure so others associated with the organization could see his skill up close.

"I said why don't you just grab the ball and go throw for a little bit? I'd like to send our coordinator and passing-game coordinator to watch," Meyer said via the Jaguars' team web site. "They've never seen him. I've seen him, so he said, 'Let's go.'" That was it. Next thing I know, we're here at a Pro Day that they put together (quickly).

"That's a guy that loves football and is confident in his ability."

Lawrence was on-target throughout the session, managing to showcase arm strength and accuracy on various route. He also saw plenty of time under center to showcase his ability to run an NFL pro-style offense next season.

“It was a good day considering it was kind of short notice,” Lawrence said after his Pro Day. “Prepared for a week probably, back in California and then back in South Carolina to put the finishing touches on, get with the guys, get some timing down. I was pretty pleased with it obviously like anything, there are some throws that you wish you could have back and hit a little better but as a whole, it was a good day. The receivers ran really well. I appreciate those guys ... I thought it was a good day.”

Lawrence will now focus his attention on the shoulder recovery. He said that doctors believe he can begin throwing around six to eight weeks after the surgery. Lawrence added that it will take around four months to get full clearance.

The timetable should allow Lawrence to be ready for training camp. He will look to build on his strong collegiate career where he put together 9,181 yards and 85 touchdowns in 37 career games.

It could be good news for Lawrence as he can get a start on learning his new team’s playbook as he recovers. The workout this past Friday was a good step in that direction.

“I think it's so important to see how quickly they get the ball out and throwing the ball high where a defender can't go get it,” ESPN draft insider Todd McShay said. “I saw it consistently inside the red zone today (from Lawrence): The ability to throw the ball high in that specific spot ... The deep throws were great, the verticals are the throws everyone loves and were the sexy ones in this past drill. But inside the red zone, you can learn more about the quarterback about how he gets it out and where he places that ball.”

Trevor Lawrence’s Tuesday surgery on his left shoulder was successful, according to NFL insider Tom Pelissero.

The operation appeared to be nothing major, considering he performed well in front of scouts and Jaguars head coach Urban Meyer.

According to Pelissero, Lawrence has a great timetable for his return.

With Clemson's spring ball getting underway Wednesday, Clemson247 selects five players on offense (and defense to come) that could stand to ta…

Urban Meyer of the Jacksonville Jaguars (left) and Dabo Swinney of Clemson look on as Trevor Lawrence works out Friday in Clemson.

Clemson quarterback Trevor Lawrence worked out Friday for several NFL personnel including his expected future pro coach, Urban Meyer of the Jacksonville Jaguars. The national championship winner is projected as the No. 1 overall pick in April's NFL draft, the spot held by the Jaguars.