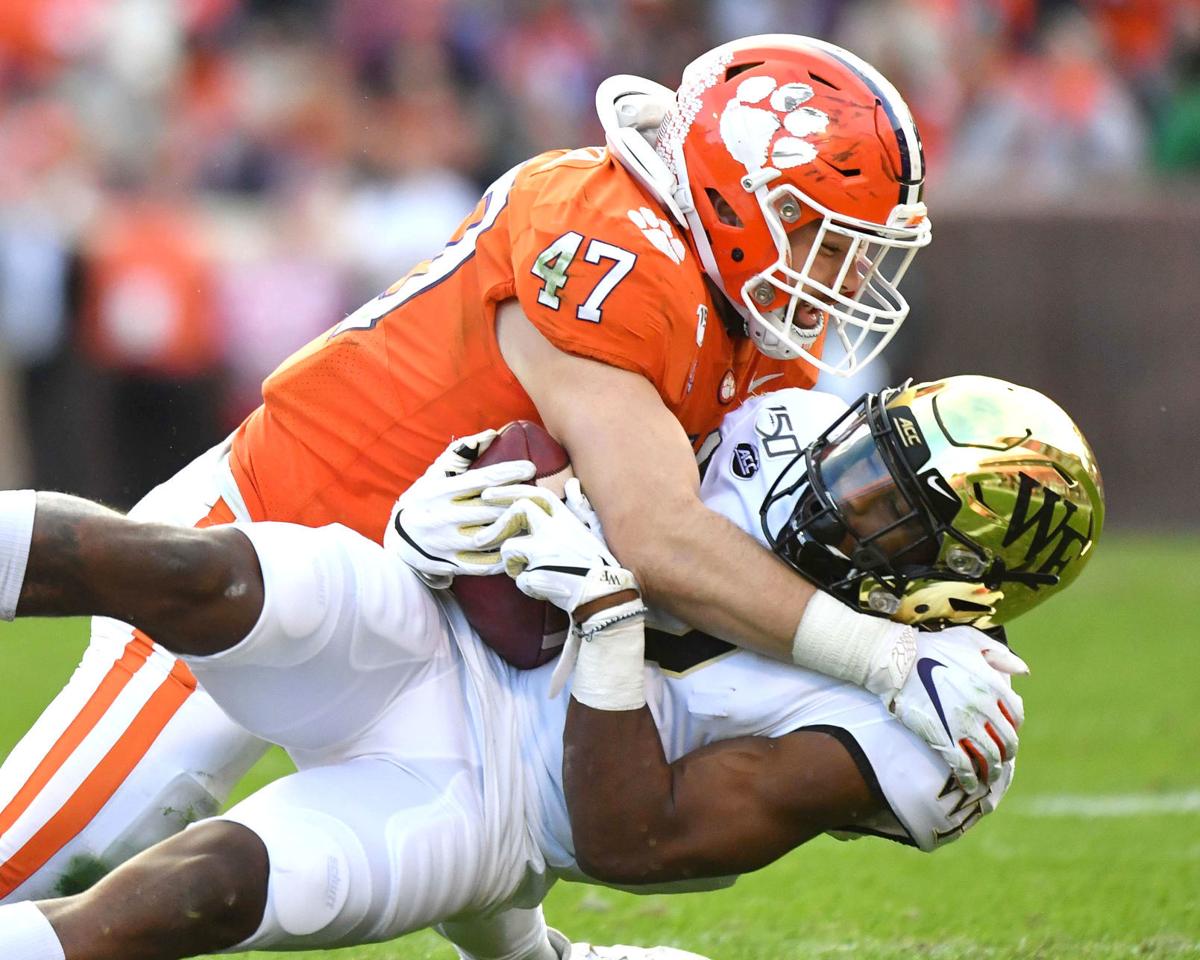 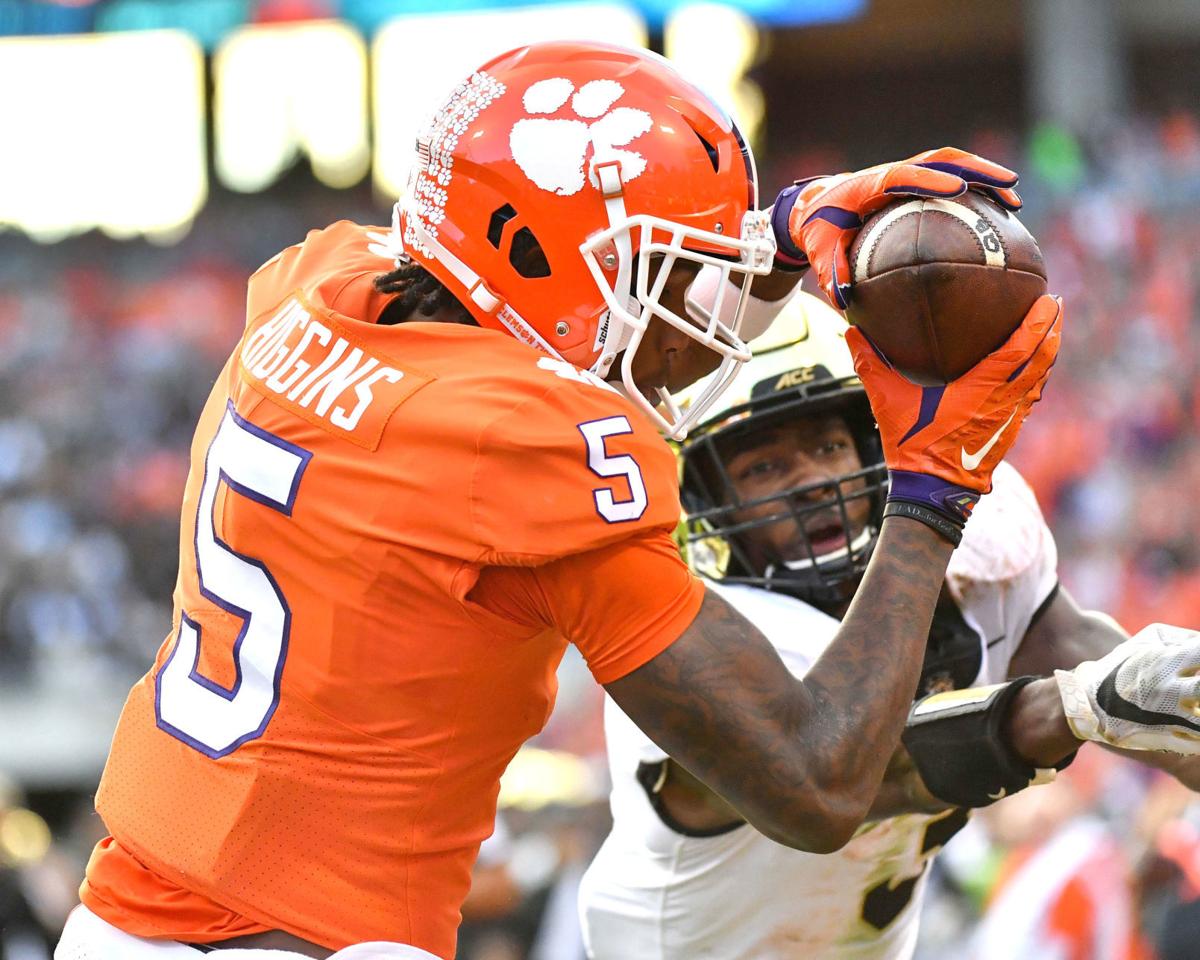 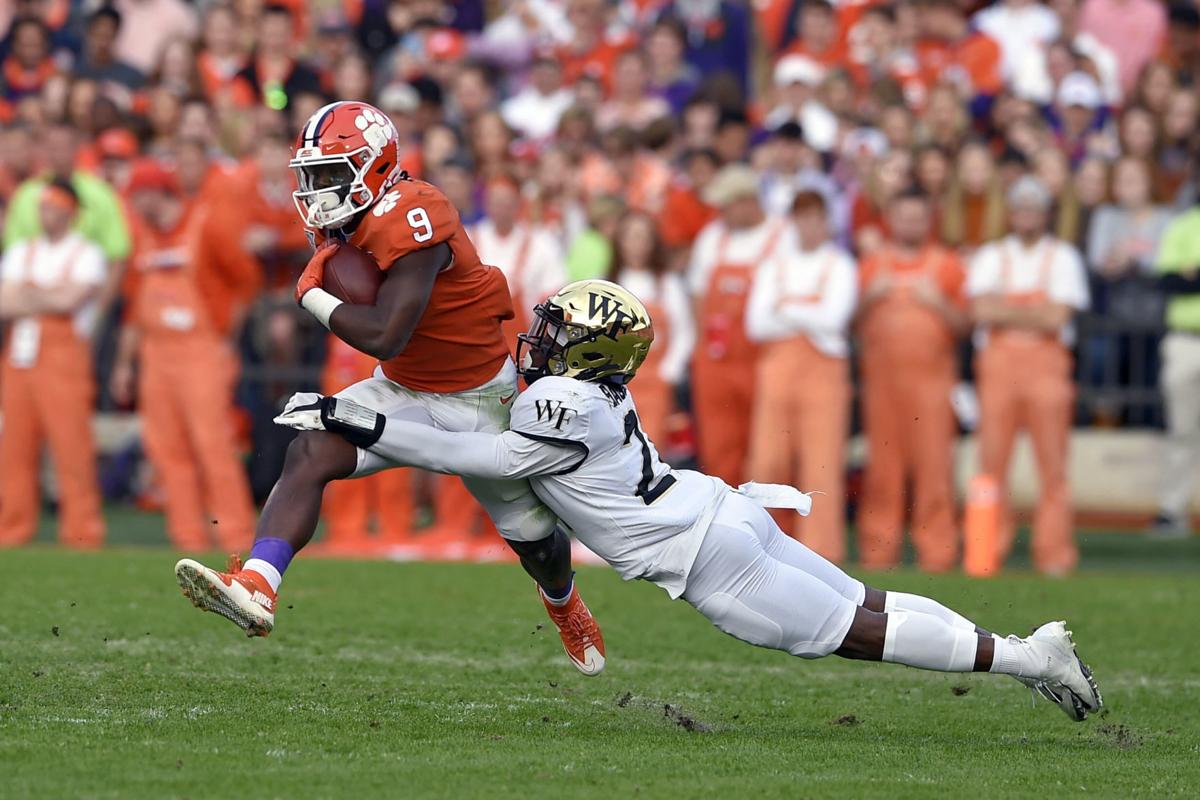 Clemson's Travis Etienne (9) rushes while defended by Wake Forest's Essang Bassey during the first half of an NCAA college football game Saturday in Clemson.

CLEMSON — The No. 3 Clemson Tigers (11-0, 8-0 ACC) wrapped up a perfect home slate of games and a perfect ACC season, as they took care of a pesky Wake Forest Demon Deacon team on Senior Day by a final score of 52-3 Saturday at Death Valley.

The Demon Deacons entered the contest averaging 35.7 points per game and more than 487 yards of offense, but were held to season-lows of three points and 106 yards of offense by the Tiger defense.

The Tigers wasted little time imposing their will on an injury-riddled Demon Deacon team. After a 52-yard punt return by Amari Rodgers gave the Tigers the ball at the Wake Forest 28-yard line, Clemson needed only two plays before Trevor Lawrence found Tee Higgins for the first touchdown of the game.

BEHIND ENEMY LINES: Clawson getting results at Wake

The Tigers were back on offense one play later, after senior safety Tanner Muse intercepted Wake Forest quarterback Jamie Newman's first pass of the game. Four plays later, the Tigers found the end zone again, as Travis Etienne's 14-yard touchdown run capped the drive that needed only 1:39 and gave the Tigers a 14-0 lead.

After back-to-back punts by the two teams, the Demon Deacons capitalized on the first Clemson miscue.

Will Spiers dropped the snap on his first punt of the day and kicked the ball to the Clemson 28-yard line, where the ball was recovered by Muse. The Demon Deacons moved the ball to the Tigers' 12-yard line, but were forced to attempt a 30-yard field goal that cut the lead to 14-3.

The three points were all the Tiger defense allowed in the first half, but they were not finished adding to their lead.

Following B.T. Potter's field goal, the Tigers added 14 points to their lead after Lawrence found Higgins for the second and third times. The second touchdown was a 14-yard strike that capped a six-play, 75-yard drive.

The third touchdown came after the Tigers' second interception of the day, this one by A.J. Terrell, gave the Tigers the ball at the Wake Forest 30-yard line. Lawrence needed only one play to extend the lead to 31-3, as he found Higgins for a 30-yard touchdown.

On the opening drive of the second half, Lawrence tied his career-high for touchdown passes in a game. His fourth touchdown pass found true freshman Frank Ladson Jr. in the back of the end zone for 10-yard score that capped a nine-play, 60-yard drive and extended the lead to 38-3.

Following Wake Forest's sixth punt of the day, the Tigers found the end zone. On second-and-10 from their own 36, Lawrence found backup running back Lyn-J Dixon for a 55-yard pass that moved the ball to the Wake Forest 9-yard line. Dixon finished off the drive one-play later, as his touchdown run pushed the Tiger lead to 45-3.

CLEMSON FOOTBALL: Division is settled but day is special

Backup quarterback Chase Brice entered the game on the Tigers' next series and turned the ball over on his first drive of the game, as his pass was intercepted by Wake Forest. However on fourth-and-2, the Tiger defense held the Demon Deacons, and gave Brice another opportunity — which he did not mess up.

On the ensuing drive, Brice completed three of his four attempts, including a 21-yard touchdown pass to Joseph Ngata that ended the scoring, and gave the Tigers a 52-3 lead.

The Tigers take next week off before traveling to Columbia Nov. 30 to take on in-state rival South Carolina at Williams-Brice Stadium to close out the regular season.

CLEMSON FOOTBALL: Swinney would have been a cheap fire

CLEMSON — Some coaches, like N.C. State's Dave Doeren, appear to handle losing to a superior opponent like a petulant child.

CLEMSON FOOTBALL: 'You don’t want a coach that is going to be soft'

CLEMSON FOOTBALL: Sorry Dan, this is not pee wee football

Clemson head coach Dabo Swinney was asked early this season about his philosophy on running up the score on opponents.

RALEIGH, N.C. — The Clemson Tigers have the ROY Bus fueled up and ready to make an appearance in the top four of the College Football Playoff …

CLEMSON—On Military Appreciation Day, in front of a sold-out, purple-clad, Memorial Stadium, the No. 3/4 Clemson Tigers did their damage by la…

Saturday, the Tigers fired up the ROY bus and took their two weeks worth of frustration out on the Florida State Seminoles, as they defeated t…

CHAPEL HILL, N.C.—The No.1 Clemson Tigers entered their game against the North Carolina Tar Heels as a 26.5-point favorite, but for the first …

CLEMSON FOOTBALL: With USC on horizon, week won't be like bye

CLEMSON — The No. 3 Clemson Tigers have a week off before they play their final game of the season. But that final game means a little more.

CLEMSON FOOTBALL: Tigers may be peaking at right time

CLEMSON — The Clemson Tigers may not be the No. 1 team in the College Football Playoff Rankings, but they may be the team playing the best foo…

CLEMSON -- After week 5 of the season, when the Clemson Tigers escaped Chapel Hill with a 21-20 win over the North Carolina Tar Heels, many ar…

Clemson's Travis Etienne (9) rushes while defended by Wake Forest's Essang Bassey during the first half of an NCAA college football game Saturday in Clemson.