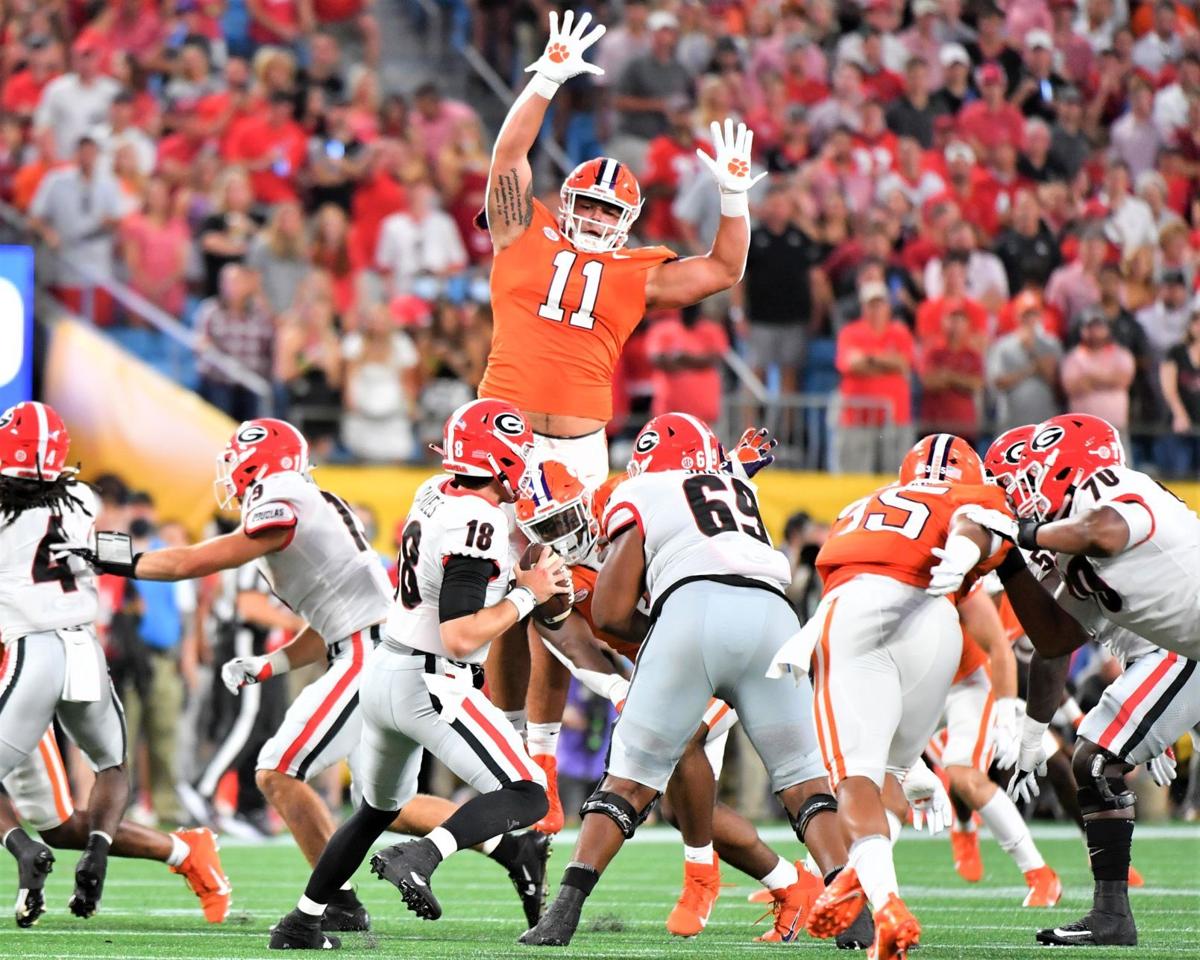 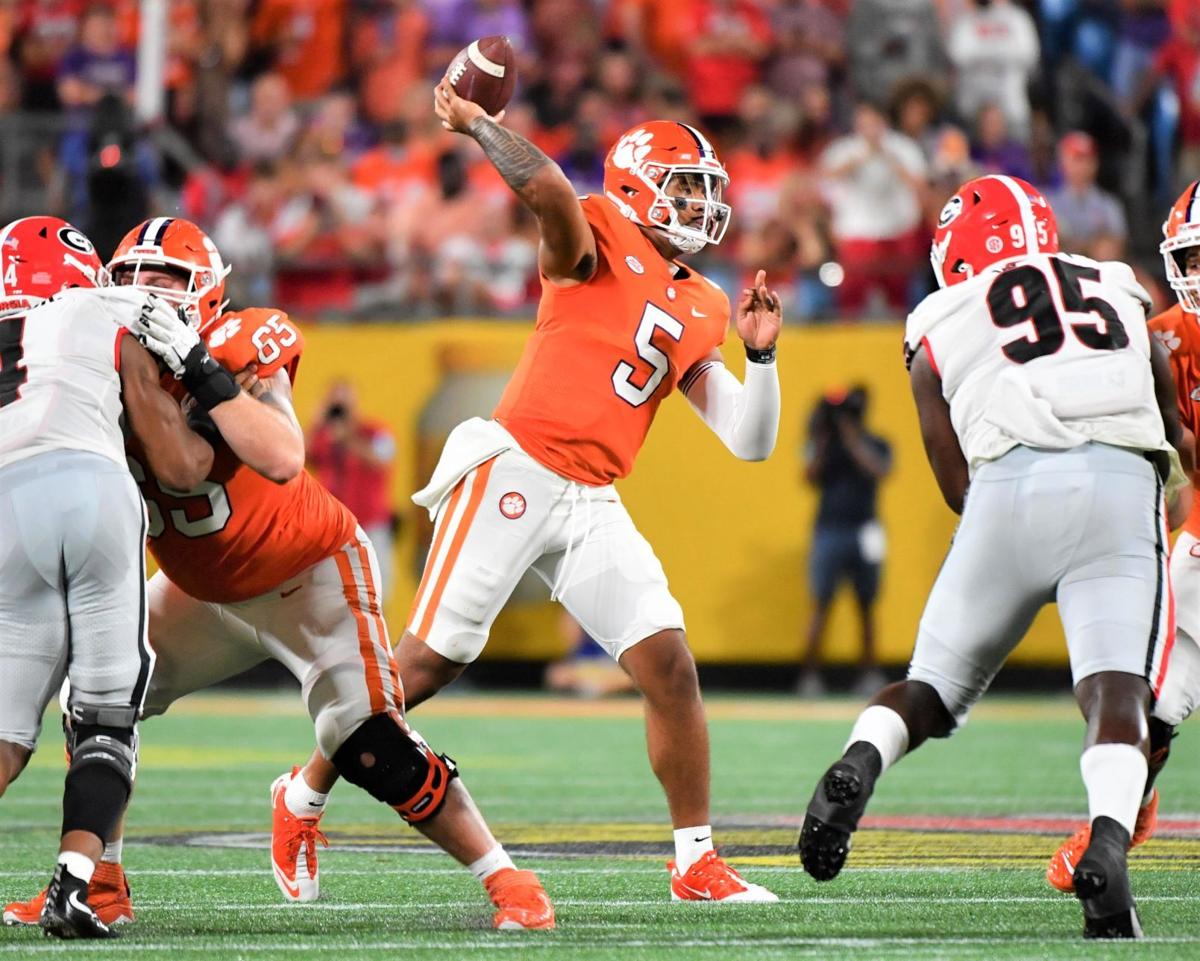 Clemson quarterback (5) DJ Uiagalele drops back to pass during action against Georgia Saturday night in Charlotte.

CHARLOTTE, N.C. — Christopher Smith returned an interception 74 yards for a touchdown and No. 5 Georgia turned in a defensive effort for the ages, toppling third-ranked Clemson 10-3 on Saturday in the opener for both teams.

The Bulldogs held the Tigers to 2 yards rushing and sacked D.J. Uiagalelei seven times to position themselves for a run at the College Football Playoffs.

Uiagalelei, who entered the season as a Heisman Trophy candidate, finished 19 of 37 for 178 yards with one interception. He bobbled snaps, was out of sync with his receivers and spent most of the day under heavy duress against a relentless Bulldogs pass rush.

Even when Georgia turned the ball over, the Tigers couldn't take advantage.

With Clemson down 7-0 in the third quarter, Baylon Specter appeared to give the Tigers they momentum they needed when he intercepted J.T. Daniels' pass at the Georgia 33. But after a short gain on first down Uiagalelei was sacked on consecutive plays and Clemson was forced to punt.

Clemson didn't score until 9:08 left in the game when a 44-yard reception by Joseph Ngata an a defensive pass interference penalty set up a 22-yard field goal by B.T. Potter, helping the Tigers avoid their first shutout since 2003.

+39 IN PHOTOS: Tigers fall to Dawgs in opener

Despite being dominated all game, the Tigers had a chance to tie with 7:35 left when they took over at their own 25. The Tigers would reach midfield and Dabo Swinney went for on fourth-and-5, only to see Uiagalelei's hurried pass fall incomplete.

From there, the Bulldogs ran out the clock.

In a first half dominated by defense -- and some pretty impressive punting — it was only fitting the only score came when Smith jumped in front of a Uiagalelei pass intended for Justyn Ross and raced 74 yards to the end zone to give the Bulldogs a 7-0 lead at halftime.

Former Tigers quarterback Trevor Lawrence, the No. 1 pick in April's NFL draft, made a surprise appearance at the game. Lawrence will start his career with the Jacksonville Jaguars on Sept. 12 when they open the season at the Houston Texans.

Georgia will make a leap into the top four, and possibly the top three after No. 2 Oklahoma struggled to beat Tulane. Clemson could drop out of the top five after being held to 180 yards.

Georgia: The defense is going to be a force to reckoned with. It held Clemson to 2 yards rushing and had seven sacks, barely giving Uiagalelei a chance to set up in the pocket. This may very well be the best defense in the country.

Clemson: One of the concerns entering the game was how the Tigers were going to replace the production of running back Travis Etienne. Tigers running backs Kobe Pace and Will Shipley combined for just 14 yards on eight carries. On the flip side, Clemson's defense is strong, holding Georgia to just three points.

CLEMSON — Printed on the left wall of Clemson’s meeting room is a list of goals, only one of which concerns the Tigers at the moment.

S.C. State may be without one of its top playmakers Saturday when they travel to Memorial Stadium to face the Clemson Tigers.

Clemson quarterback (5) DJ Uiagalele drops back to pass during action against Georgia Saturday night in Charlotte.