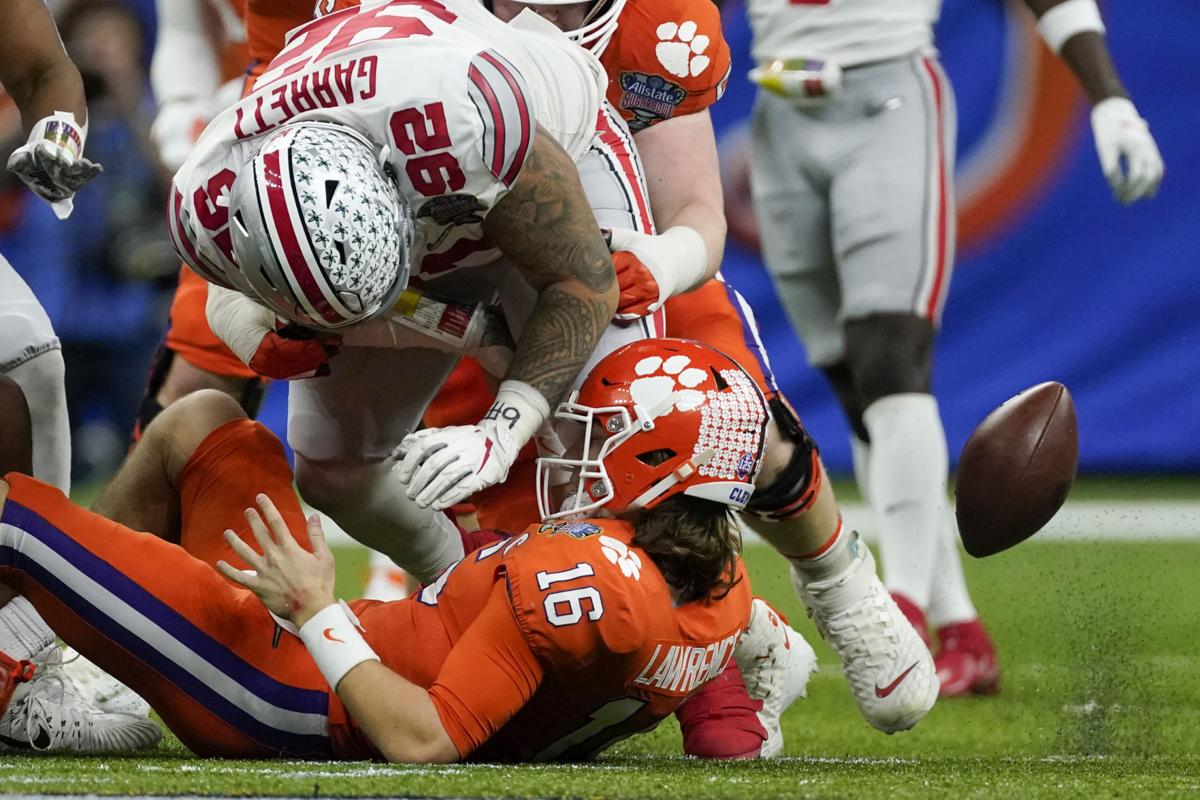 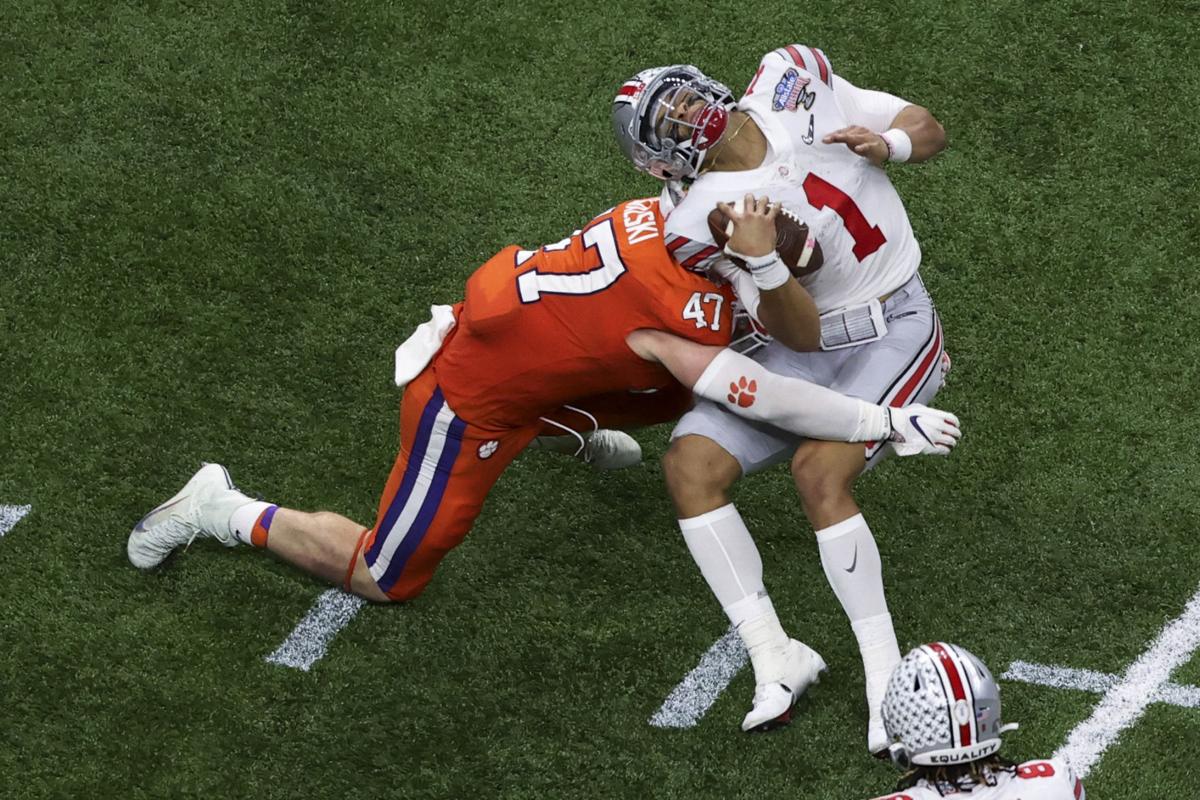 Ohio State quarterback Justin Fields gets hit by Clemson linebacker James Skalski during the first half of the Sugar Bowl. kalski was ejected from the game for targeting.

NEW ORLEANS — Clemson quarterback Trevor Lawrence was on his back, reaching out desperately with his right hand to try to gather in the ball after it squirted through his arms as he was dragged down to the Superdome turf.

The Heisman Trophy finalist couldn't quite get a grip on it before it was ripped loose and ultimately recovered by Ohio State.

And with that, Lawrence's bid to finish an extraordinary college football career with his second national championship in three seasons slipped away. The Tigers were down three touchdowns and the deficit grew even larger in the fourth quarter before No. 3 Ohio State celebrated a 49-28 victory over No. 2 Clemson in the College Football Playoff semifinal at the Sugar Bowl on Friday night.

"I missed a few throws and put too many balls on the ground," said Lawrence, who fumbled three times but only lost one. "Obviously, it sucks to finish like this."

For the second consecutive season, Lawrence and Clemson got bounced from the CFP by being blown out in the Big Easy. Those are the only two losses in his 36 college starts.

Last season, Clemson fell 42-25 to LSU in the national championship game on the same field, with Lawrence having one of the worst games of his career (18 of 37, 234 yards, no touchdowns passing). This year in New Orleans, like last year, Lawrence scored the game's first touchdown on a keeper, but later lost a fumble while Clemson was trying to close a yawning second-half deficit.

Lawrence played better overall this year, despite Clemson being without offensive coordinator and play-caller Tony Elliott, who was in COVID-19 protocol and did not make the trip to New Orleans. Lawrence finished 33 of 48 for 400 yards and two touchdowns with one interception.

"I tell you what, man, Trevor Lawrence, I know we didn't win the game, but you saw everything you need to know about that guy tonight," Clemson coach Dabo Swinney said. "I mean, he just, he wanted to play 'till the last second and give it everything he has. And that's just who he is as a person."

The way Clemson's defense struggled most of the game, giving up two scoring passes of 45 yards or more in addition to a 32-yard touchdown run, that wasn't nearly enough.

When it was over, Lawrence had been outshone by Ohio State quarterback Justin Fields (22 of 28, 385 yards, six TDs).

The season "didn't end the way we wanted it to, but it was special," Lawrence continued. "We just didn't get it done tonight for a lot of reasons. ... In games like this, you've just got to play well all the way around and we didn't do that."

That won't change anything regarding the Heisman Trophy, because the votes were already in. Lawrence is one of four finalists, along with Alabama QB Mac Jones, Crimson Tide receiver Davonta Smith and Florida QB Kyle Trask.

Time will tell if it affects the thinking in pro football front offices. Lawrence, for much of this season, has been the consensus projected top pick in the 2021 NFL draft assuming he passes up his senior year at Clemson.

Still, he'll be remembered as one of the faces of college football — on the field and off — during a tumultuous junior year.

Over the summer, he was out front of both social justice marches and calls for the games to continue despite the COVID-19 pandemic.

His stances earned him the respect of his peers across the country, as did his play.

In three seasons, Lawrence has passed for 10,098 yards and 90 touchdowns, and has rushed for 943 yards and 18 TDs. He also went down in Clemson history as the QB for the program's third national championship team. He is the winningest quarterback in Clemson history and he led the Tigers to three straight ACC titles

That may have to suffice. After all, not many have done better.

Swinney said Lawrence and Clemson senior running back Travis Etienne leave behind "incredible legacies" and "set the standard" at Clemson while never expecting "anything more from their teammates than they were willing to give."

"Trevor Lawrence is a generational guy. He's going to be a great player for a long, long time," Swinney added. "We're all sad that it ended the way it ended tonight. And we wanted to end it in Miami with a victory (in the national title game) and ride off into the sunset, but that wasn't to be."

One of the best tried-and-true college football media traditions is the day-after, way-too-early preseason rankings in the immediate wake of t…

No. 1 Alabama and No. 3 Ohio State will square off for the national championship on Monday after the Buckeyes knocked off the favored Clemson …

Ohio State quarterback Justin Fields gets hit by Clemson linebacker James Skalski during the first half of the Sugar Bowl. kalski was ejected from the game for targeting.