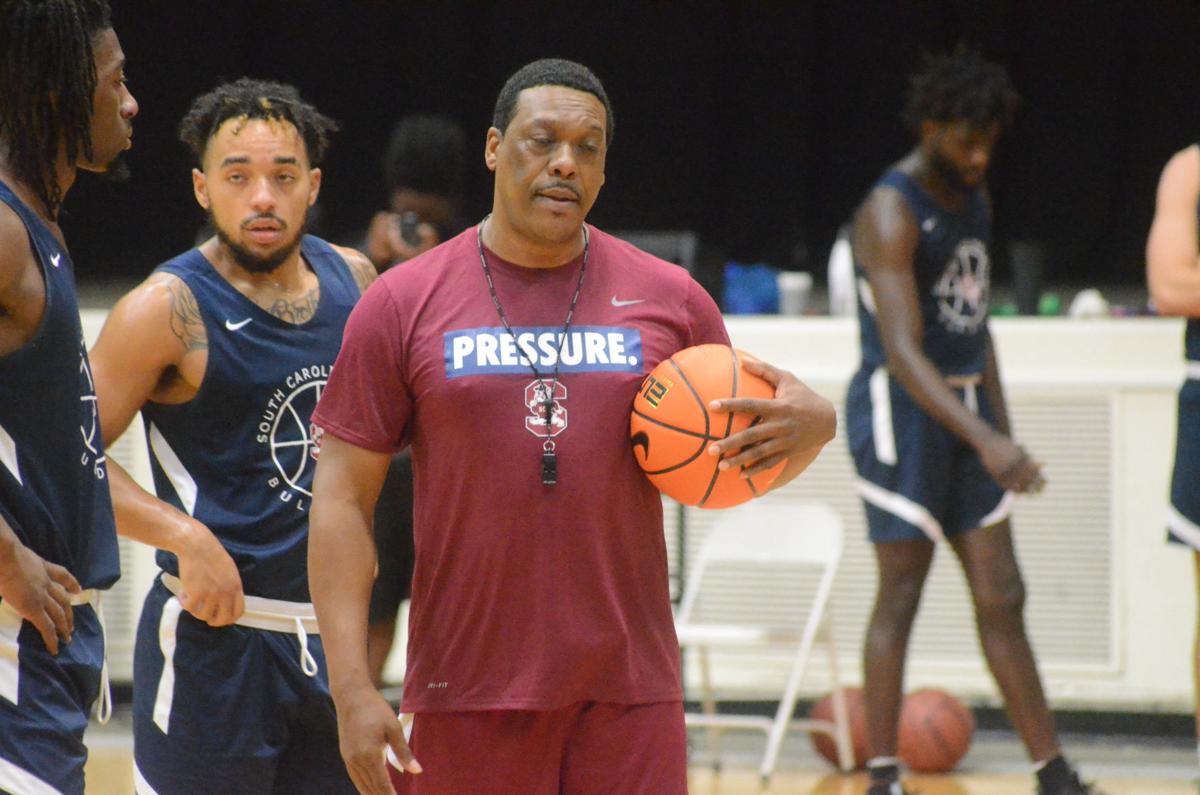 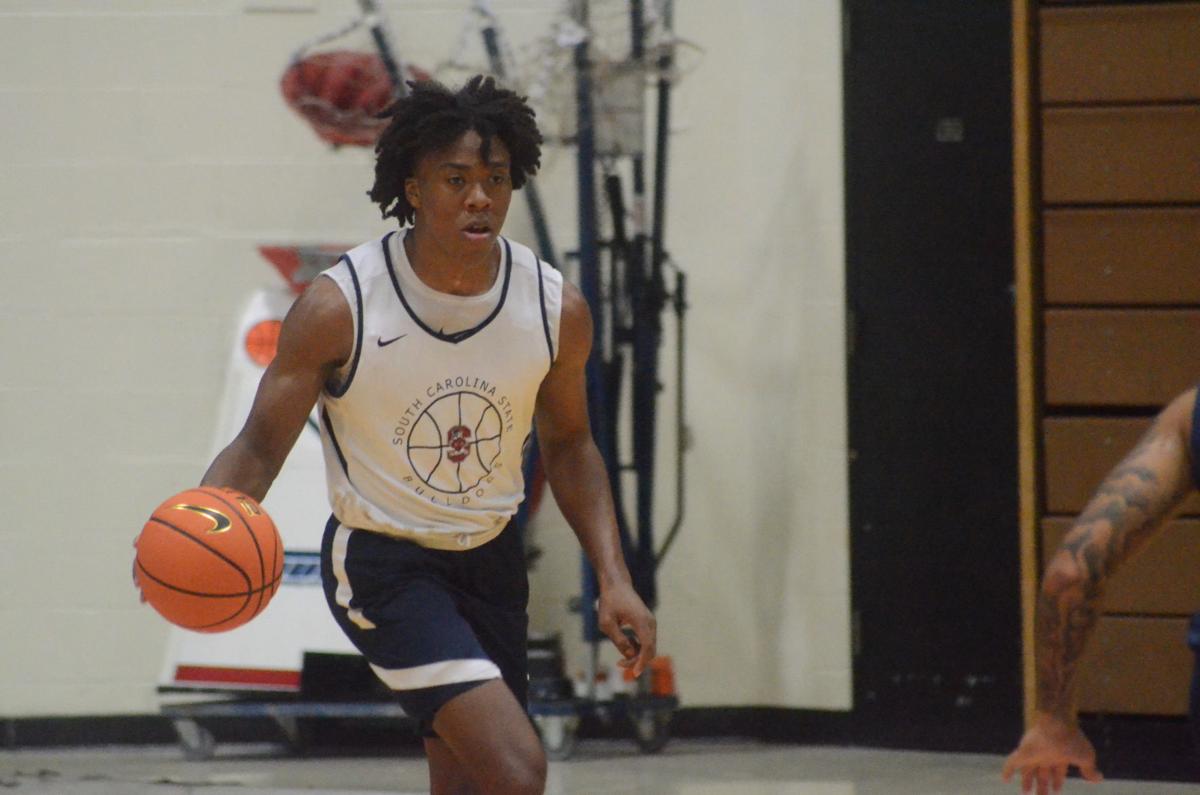 South Carolina State's T.J. Madlock brings the ball up the court during a drill Tuesday at Smith-Hamilton-Middleton Memorial Center. 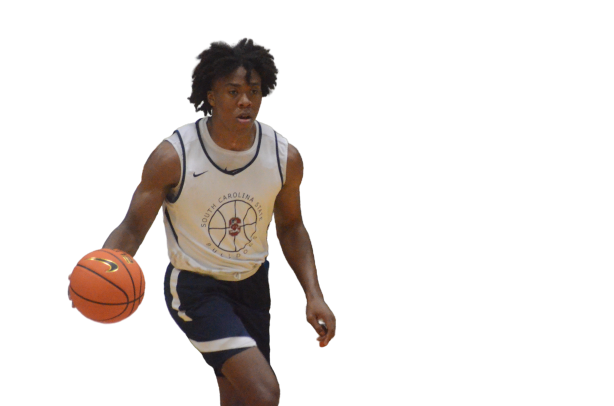 Tony Madlock accepted the head-coaching position March 31 after spending 24 years as an assistant. His last stop was with Memphis, where he played with current head coach Anfernee “Penny” Hardaway.

“It’s always been my dream to build my own program,” Madlock said at his introductory press conference. He inherits a team that was 1-17 last year and has not posted a winning record since 2016.

“The message we’re telling our guys is to compete,” Madlock said Tuesday after his team trotted off the floor. “The guys have been working really hard in the offseason, and we’re excited about what we have, but now it’s real.”

“We’ve spent the offseason trying to find out who we are as a team,” Edwards said. “The toughest part has been learning a new system, but the coaches have done a great job of putting us in the right situations to be successful.”

Edwards said the style of play has been an adjustment as well.

“Last year, we were mainly in half-court sets, but this year we’re getting up and down the floor,” Edwards said. “We want to guard 94 feet, so offseason conditioning was important.”

One of the new faces on the roster will be graduate transfer Deaquan Williams. While playing with Lincoln University in Pennsylvania, Williams was the CIAA Defensive Player of the Year and a BOXTOROW Second-Team All-American.

“(Deaquan) is a tough, hard-nosed player that does things the right way,” Madlock said.

Edwards said it has been a process making the transition to SCSU.

“I’m just taking it a day at a time,” Edwards said. “We’re not rushing into anything, we’re taking our time to gel as a team. Everybody trusts the process even with the young guys on the team.”

One of those young guys is freshman T.J. Madlock, who decided to sign with South Carolina State when his father took the head-coaching job. Madlock led his high school team to a state championship a year ago and was ranked the No. 11 prospect in the state of Tennessee by 24/7 Sports.

“I’m a defender,” T.J. Madlock said. “We’re big on defense, we want to be the best defenders in the conference. This offseason it was all about lifting, trying to get bigger, stronger and quicker. We focused a lot on conditioning because we want to play fast.”

Tony Madlock said the team has done well to adjust to the new coaching staff and the new system, but after Tuesday, everything gets turned up a notch.

“We have to be on a whole other level now,” Madlock said. “As coaches, we have talked about how to teach and install the system, but now we have to start getting ready for that first game.”

That first game is scheduled for Nov. 9 at East Carolina University. The Bulldogs also have scheduled road contests against College of Charleston, South Carolina, Georgia and Duke.

Madlock said after every game he wants people to say that his team played hard.

“Whatever happens, if those fans, opponents, opposing coaches come away saying ‘S.C. State plays really, really hard,’ then I have done my job.”

Syracuse University and the Mid-Eastern Athletic Conference have signed a first-of-its-kind agreement creating an alliance designed to connect institutions, students-athletes, staff and alumni.

The 10-year partnership, which is already underway, creates multiple opportunities for collaboration between Syracuse and the MEAC’s member institutions.

Additional elements of the alliance include:

South Carolina State University will host Homecoming 2021 on Oct. 10-16 in the Garden City of Orangeburg.

FERRUM, Virginia – Ferrum College has announced its Sports Hall of Fame Class of 2021, with seven individuals slated for induction.

South Carolina State's T.J. Madlock brings the ball up the court during a drill Tuesday at Smith-Hamilton-Middleton Memorial Center.