WATCH NOW: TD CLUB: Williams - Never forget where you come from
0 comments
Share this
{{featured_button_text}}
1 of 3 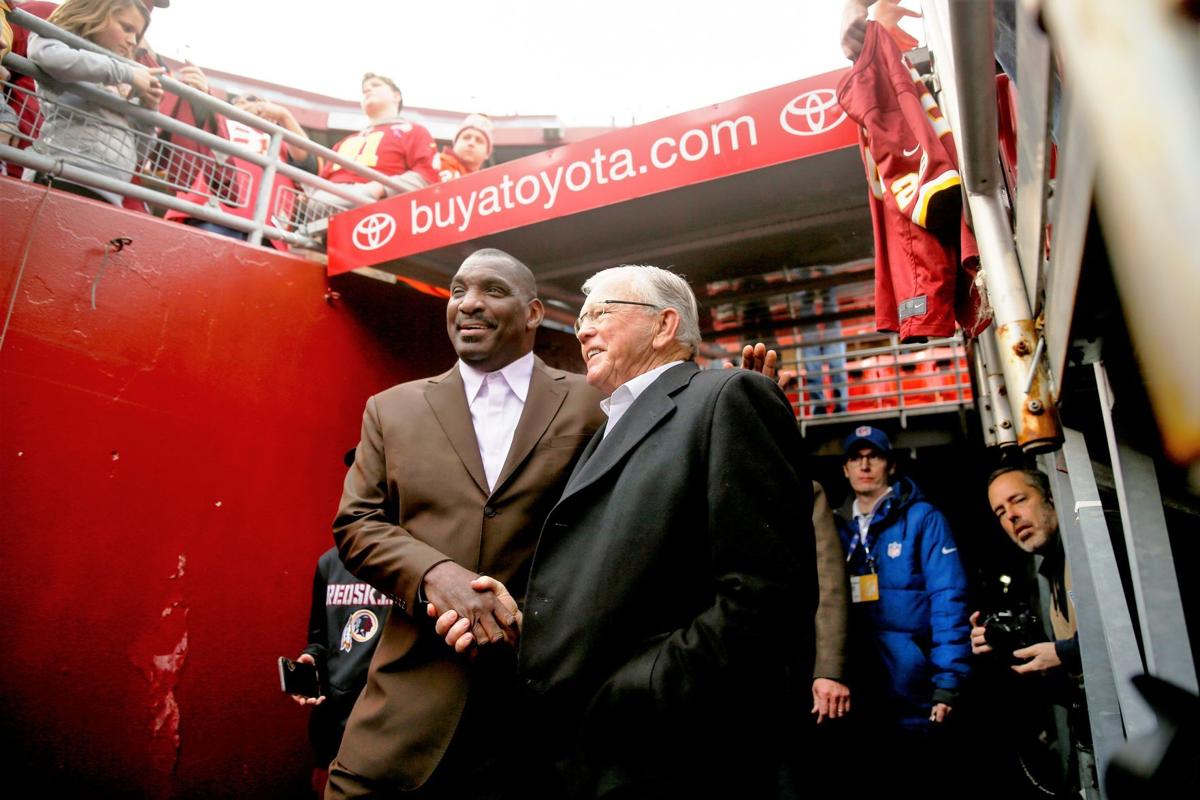 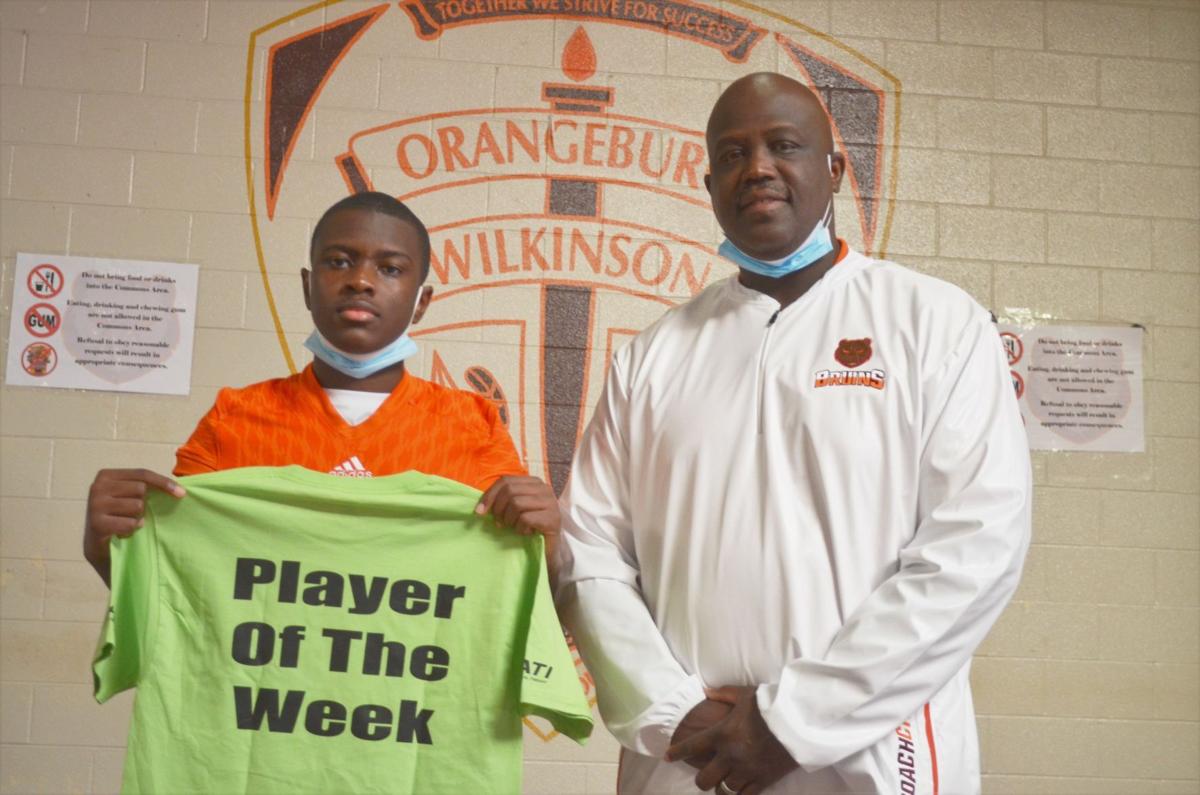 Orangeburg-Wilkinson sophomore quarterback Anthony Mack was named the ATI Physical Therapy Offensive Player of the Week by the Orangeburg Touchdown Club. Mack, who is joined by O-W Head Football Coach Butch Crosby, accounted for 230 yards of offense in the Bruins' 23-13 region win at home against Strom Thurmond. 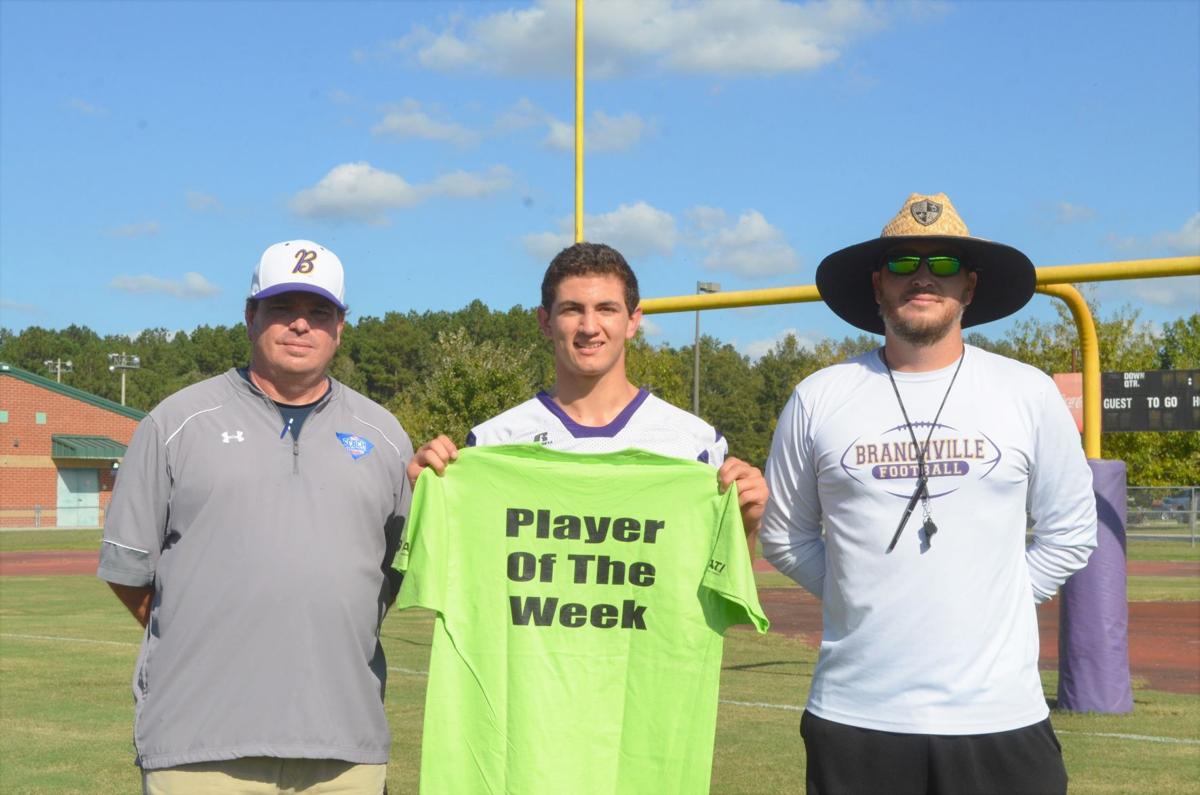 Branchville senior linebacker Codi Davis was named the ATI Physical Therapy Defensive Player of the Week by the Orangeburg Touchdown Club. Davis, joined by Yellow Jacket coaches Hal Hayden and Sandy Dukes, made 16 tackles in a 35-20 region win at Estill.

Thursday's Orangeburg Touchdown Club meeting via Zoom was unlike any other meeting in the history of the club.

South Carolina State Head Football Coach Buddy Pough joined the meeting from a cabin at Table Rock State Park in Pickens, as part of a Tailgate Tour of State Parks hosted by the South Carolina Department of Parks, Recreation & Tourism.

After updating everyone on how the Bulldogs football team is doing in off-season workouts, Pough then introduced 1988 Super Bowl MVP Doug Williams, who was a star for Grambling State University and the Washington Redskins during his playing days. Williams now works for the Washington Football Team (formerly the Washington Redskins), as senior vice president of player development.

"We are up to 4 days a week conditioning with our team, and workouts are going pretty good," Pough said. "Our freshman class still looks to be a good class, and we will start what you would call spring practice next Monday morning.

"We will practice in shorts for the first part of the week and then, later in the week, we will put on some shoulder pads and eventually get to the place where we can have a regular practice, similar to what you do in the spring of the year. This is odd, having a spring practice in the fall. We do have a season possibly coming in February. So, we will have more information in the coming weeks, since it's been almost a year since we've had a football practice around here."

"Coach Buddy Pough has done a great job at South Carolina State, and I've known Coach Willie Jeffries for a long time, since he worked at South Carolina State and at Grambling for a while," Williams said. "I'm just a small-town boy from Zachary, Louisiana, a place where we didn't have a red light, just a caution light at one intersection."

Williams discussed having to do chores around the house and having to tend to farm animals each morning before he went to school as a child.

"I was 14 years old before we had running water at the house," Williams said. "The reason I'm sitting where I'm sitting now is because of what I had to go through growing up.

"I come from humble beginnings. Never forget where you come from. I was fortunate enough to go to high school, and to play basketball, baseball and football. Football wasn't something I loved. But, my oldest brother was my football coach when I was in 8th grade. From there on, I played football."

One tackle on future LSU and NFL running back Terry Robiskie in high school made Williams ask to stay on offense for the rest of his career. That worked out well, as he had standout quarterbacking statistics at Chaneyville High School. A Grambling State scholarship followed, which led to the Tampa Bay Buccaneers drafting Williams with the 17th overall pick in the 1978 NFL Draft.

There was a time at Grambling, during his 1973 redshirt season, when Williams decided he wanted to quit playing football there and perhaps return home to play for Southern University. But, he changed his mind and stuck it out.

"Five years with the Buccaneers, we made the playoffs three of those years," Williams said. "Then, in 1983, I did not play one down of football. I had lost my first wife to an aneurysm and we had a 5-month-old baby girl. So, I started thinking football might not be as important as I thought it was.

"I went back home, my brother was a middle school principal, and I substitute taught for the whole year. Then, the USFL had just came in. I got a call in 1984 from the Oklahoma Outlaws. I went out there for two years, and then it folded."

That's when a phone call came from Washington Redskins Head Coach Joe Gibbs. Gibbs had been the only pro scout to spend two days at Grambling to scout Williams and others years earlier. Gibbs was also on the Buccaneers' staff that drafted Williams.

"Coach Gibbs said that Joe Theismann had just gotten hurt and Jay Schroeder was their young quarterback," Williams recalls. "Coach asked me could I come to Washington and be a backup quarterback.

"I said 'Coach, I can come to Washington and be anything you want me to be, because I don't have a job.' It was an opportunity. In 1986, I threw exactly one pass in a game, and it was incomplete."

In 1987, Williams came off the bench in several games to replace Schroeder and lead the Redskins to wins.

The day before the Super Bowl in January of 1988, Williams spent the day in a dentist's chair in San Diego having a root canal operation for four hours. A day later, he led Washington to a 42-10 win against John Elway and the Denver Broncos, cementing his place in history. As an African-American quarterback who was paid a back-up player salary, Williams had played his best on the game's biggest stage.

Since then he has coached high school football, including getting a state playoff win that ended Peyton Manning's prep career with a loss. Williams later coached at the U.S. Naval Academy, was a scout for the Jacksonville Jaguars, and served as head football coach at both Morehouse College and Grambling State University.

For a College Football Hall of Fame member whose story sounds like a movie, a production company began making a movie of Williams' life earlier this year. He previously authored a book about his life, entitled Quarterblack: Shattering the NFL Myth.

Also during Thursday's online OTC meeting, two ATI Physical Therapy Players of the Week were recognized. Orangeburg-Wilkinson sophomore quarterback Anthony Mack was named Offensive Player of the Week, having accounted for 230 yards of offense in Friday’s 23-13 Region 5-3A home win for the Bruins against Strom Thurmond. Also, Branchville senior linebacker Codi Davis was named Defensive Player of the Week, having made 16 tackles in Friday’s 35-20 Region 6-A win at Estill.

The guest speaker for next Thursday's Orangeburg Touchdown Club meeting on Zoom will be Vanderbilt offensive coordinator Todd Fitch.

Levon Kirkland had an outstanding football career, from his playing days at perennial SCHSL Class A power Lamar High School, to Clemson Univer…

Like many of his teammates of the past three seasons, South Carolina State defensive back Zafir Kelly was all but certain that by now, the Bul…

Orangeburg-Wilkinson sophomore quarterback Anthony Mack was named the ATI Physical Therapy Offensive Player of the Week by the Orangeburg Touchdown Club. Mack, who is joined by O-W Head Football Coach Butch Crosby, accounted for 230 yards of offense in the Bruins' 23-13 region win at home against Strom Thurmond.

Branchville senior linebacker Codi Davis was named the ATI Physical Therapy Defensive Player of the Week by the Orangeburg Touchdown Club. Davis, joined by Yellow Jacket coaches Hal Hayden and Sandy Dukes, made 16 tackles in a 35-20 region win at Estill.