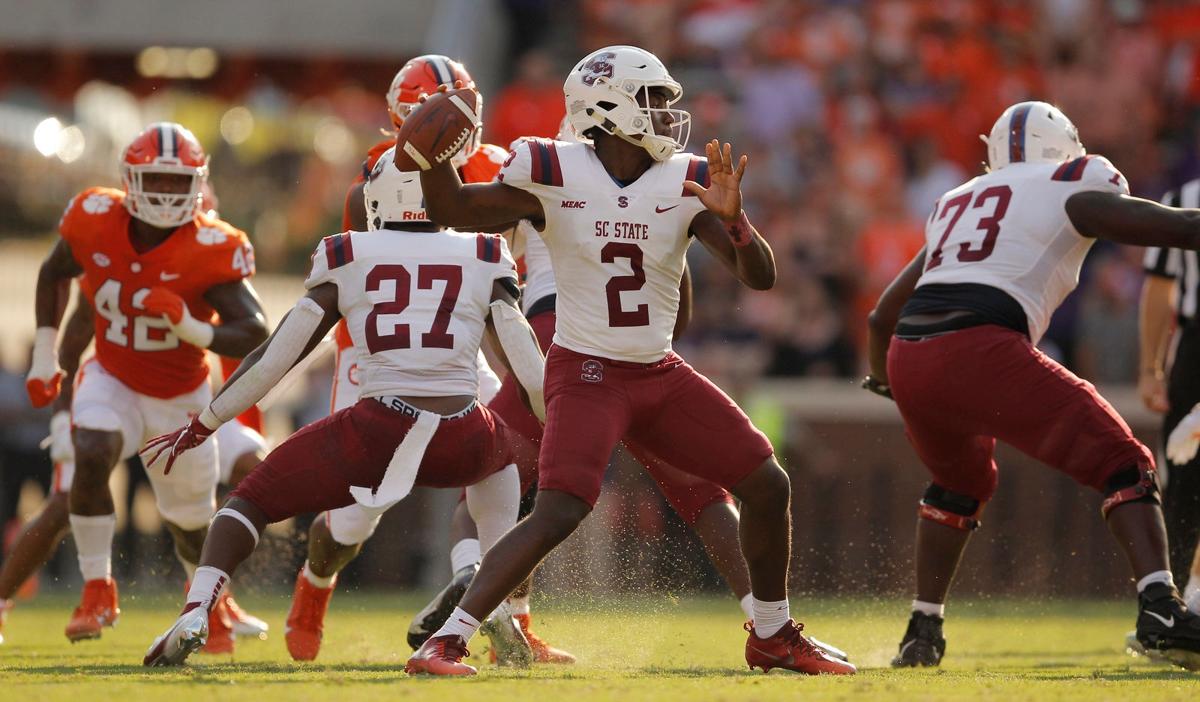 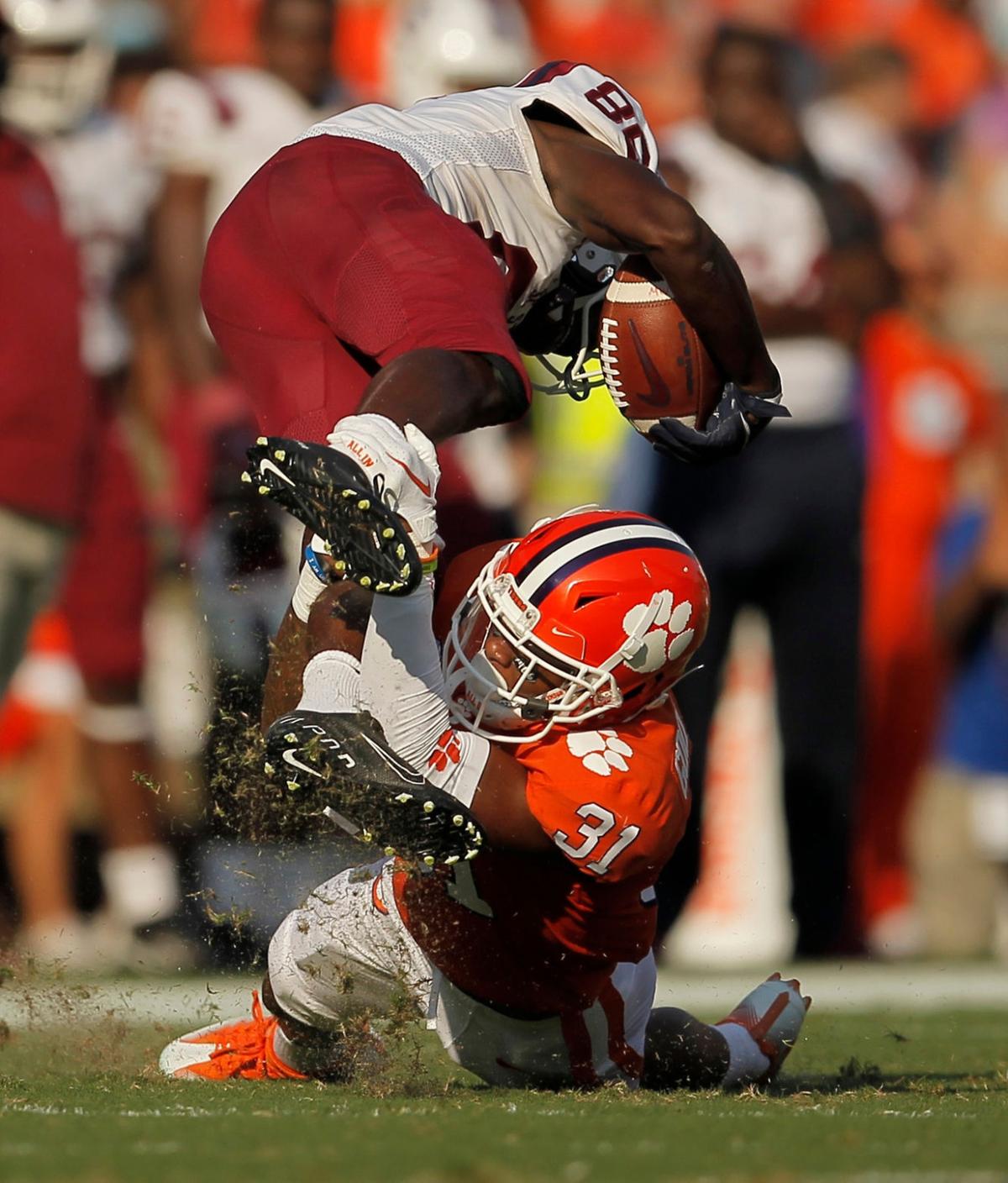 Earlier this week, SC State head coach Buddy Pough recalled how a few of his former players showed up on professional scouts' radars after playing against high-profile opponents.

"When scouts turn on film, this will be the first game they watch," Pough said at his press conference Monday. "They want to see how you performed against a Power Five team."

Bulldog seniors Will Vereen and Decobie Durant each provided highlights Saturday in a 49-3 loss to sixth-ranked Clemson Saturday at Memorial Stadium.

With Shaq Davis on the sideline, Vereen became quarterback Corey Fields' top target, catching four passes for 96 yards to lead all receivers. Vereen returned to the field this season after a 2019 ACL injury forced him to miss the last two seasons.

"I thought Will Vereen played really good for us tonight," Pough said. "Despite the number of receivers we had missing."

IN PHOTOS: Bulldogs fall to Tigers

SC State's offense struggled early going three-and-out on their first three drives. Clemson led the game 28-0 before the Bulldogs were able to manage a first down.

Trailing 35-0 late in the first half, SC State's linebacker BJ Davis caused a fumble that was recovered by Shaheem Haltiwanger at the Clemson 36 yard line. The Bulldogs marched 26 yards in the last two minutes but had to settle for a 27-yard field goal from Dyson Roberts.

Pough said his team has gotten through the tough part of their schedule after Saturday's loss.

"We have to go about the task now of seeing if we can't re-group and get ready for New Mexico State."

The Bulldogs travel to Las Cruces next Saturday with kickoff scheduled at 8 p.m.

Despite the loss Pough said Saturday's game was a chance to be a part of something a little bit bigger than ourselves.

"(Clemson) has so many pieces in place, it's hard to be hard on our guys," Pough said. "They fought their butts off, but we didn't have enough. We were missing some parts of our deal."

Davis led the Bulldogs with seven tackles while Jalen Barr, Jaylen Evans and Aaron Smith each added five tackles apiece. Chad Gilchrist also forced a fumble on defense but was unable to recover.

Quarterback Corey Fields completed 10-of-24 passes for 132 yards and an interception. Hill missed on all three of his pass attempts.

For Clemson, the Tigers were looking to fix some mistakes from last week's 10-3 loss to Georgia while playing a number of different players. Clemson had over 100 players take the field in the victory Saturday.

After managing just a field goal last week, Clemson's offense had over 500 yards of total offense against the Bulldogs. The Tiger attack was balanced with 262 yards passing and 242 yards rushing.

Will Shipley led the rushing attack with 80 yards on eight carries and two touchdowns. Kobe Pace nearly averaged 10 yards per carry on 7 attempts while scoring a touchdown and Lyn-J Dixon added 27 yards.

D.J Uiagalelei completed 14-of-24 passes for 171 yards and touchdown. He also had an interception as did Taisun Phommachanh. Justin Ross was the leading Clemson receiver with three catches for 52 yards.

Defensively, Ruke Orhorhoro and Jeremiah Trotter each had five tackles to lead the Tigers. As a team, Clemson totaled 10 tackles for loss as Orhorhoro and Kevin Swint combined for 4.5. Trotter had the lone sack while R.J. Mickens added an interception.

Former Calhoun Academy standout Will Spires punted just once for the Tigers. It was a 47-yard kick.

49: Number of points scored by Clemson Saturday. It is the least amount of points the Tigers have scored in the five games against the Bulldogs.

May have been early Saturday morning when one of SC State's charter buses broke down on the drive from Greenville to Clemson. According to reports, no Bulldog players were on the affected bus that had to make an emergency stop on I-85.

IN PHOTOS: Tigers fall to Dawgs in opener

No. 5 Georgia turned in a defensive effort for the ages, toppling third-ranked Clemson 10-3 on Saturday in the opener for both teams.

No. 5 Georgia turned in a defensive effort for the ages, toppling third-ranked Clemson 10-3 on Saturday in the opener for both teams.

IN PHOTOS: August 26 meeting of the Orangeburg Touchdown Club

South Carolina State's football team is ranked sixth in the latest BOXTOROW media poll and seventh in the coaches poll.

Dabo Swinney had nothing but kind words to say about S.C. State head coach Buddy Pough as Clemson prepares to host the Bulldogs Saturday at Me…

S.C. State may be without one of its top playmakers Saturday when they travel to Memorial Stadium to face the Clemson Tigers.

Two weeks into the regular season and already 12 ranked teams have lost, including five to unranked teams.

S.C.STATE FOOTBALL: Bulldogs look to rush past the Aggies