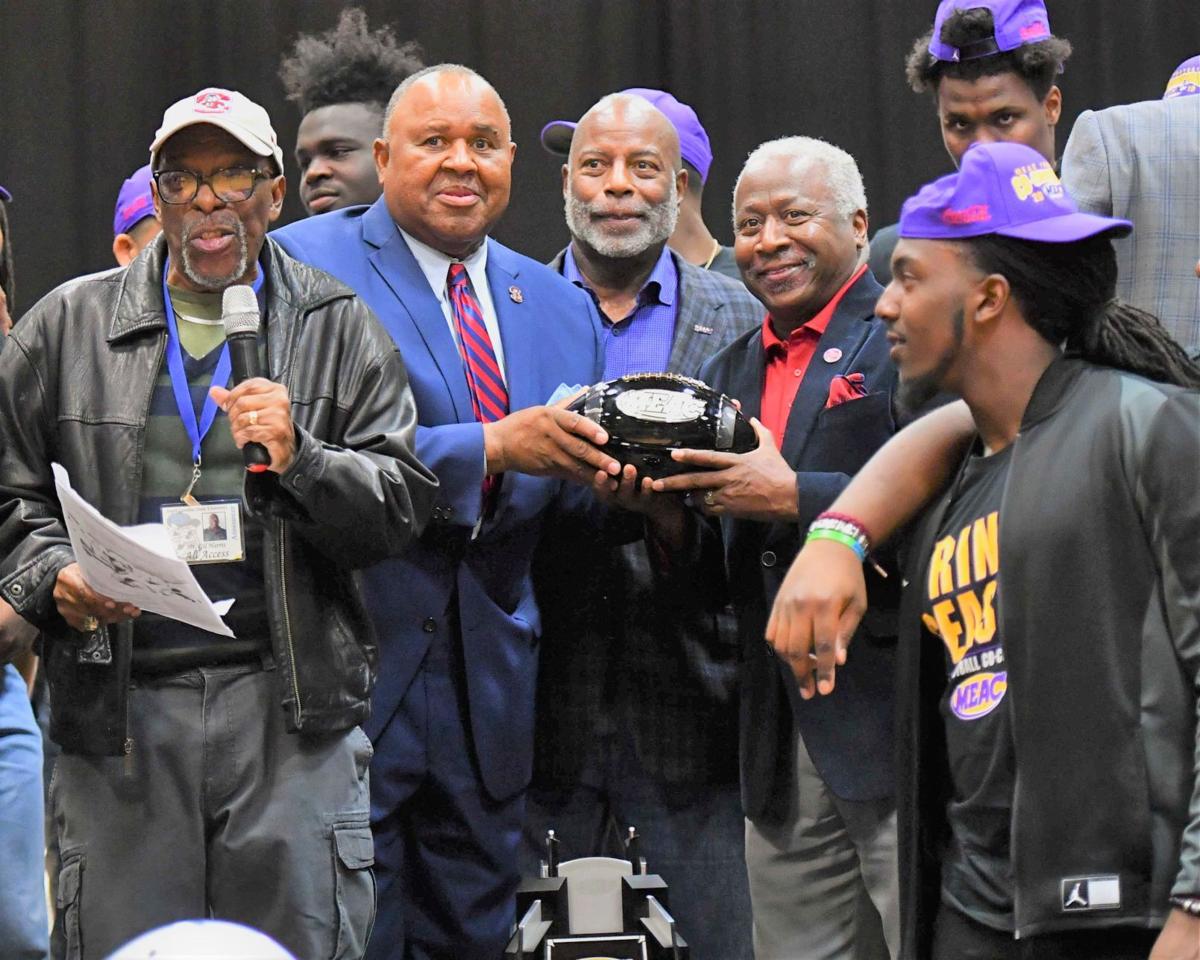 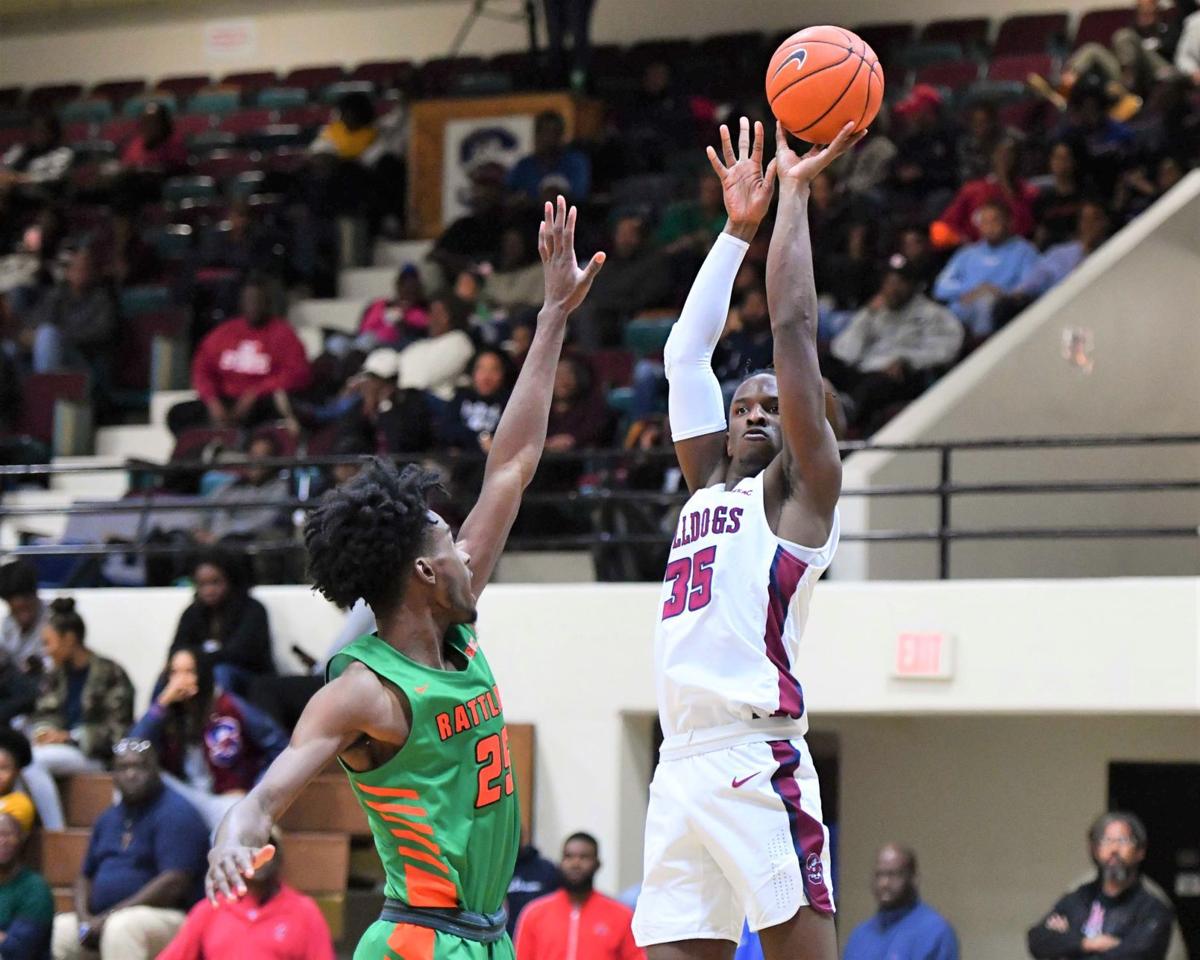 The 2019 Mid-Eastern Athletic Conference football championship trophy arrived in Orangeburg on Saturday and was presented to Bulldogs head coach Buddy Pough and his team.

The presentation was held during halftime of the MEAC men's basketball game between SC State and Florida A&M University inside Smith-Hammond-Middleton Memorial Center.

The Bulldogs were co-champions for 2019, along with North Carolina A&T State University. It marked the first conference championship for the SC State program since the 2014 season.

Pough led the Bulldogs to the biggest turnaround of the season in the MEAC, after the Bulldogs finished 2018 with a 5-6 overall record and a 4-3 mark in conference play.

Pough also surpassed Willie Jeffries as the all-time winningest coach in SC State football program history, moving to 133-74 in his time on the Bulldogs' sideline.

“We knew it wouldn’t be easy, but the players never put their head down and we were able to capture a share of the league title,” Pough said, after a season-ending win at Norfolk State. "I've learned this season that we've got a lot of quality people in this program.

"We've got to let them continue to develop and grow. It's special to have the opportunity to be a part of something like this."

Redshirt freshman quarterback Corey Fields was named MEAC Rookie of the Year, while Pough earned his third MEAC Coach of the Year accolade.

Eight Bulldogs earned All-MEAC honors, and all were recognized during Saturday's ceremony.

Pough and Bowie State head coach Damon Wilson were both voted 2019 BOXTOROW Co-Coaches of the Year, Pough's first time named as the top coach among all HBCU programs.

to MEAC win against FAMU

Applewhite finished shooting 6 of 8 from the field and missed just one of 11 attempted foul shots. He grabbed nine rebounds, with five coming on the offensive end.

South Carolina State matches up against Maryland Eastern Shore at home on Monday.

Florida A&M matches up against NC Central at home on Monday.

South Carolina State got 10 points from Jayah Hicks and De’Mean Bond came off the bench for nine points and 10 rebounds for the Lady Bulldogs in their Mid-Eastern Athletic Conference home game Saturday.

But Florida A&M built an eight-point lead in the final seven minutes and held on for a low-scoring 44-39 win over the host squad.

Coach Audra Smith’s SC State team trailed by only one, 40-39, after Bond made 1 of 2 from the foul line with 1:35 to play, but that was the final points of the contest for SC State.

The Lady Bulldogs had consecutive turnovers before the visiting Lady Rattlers made 4 of 6 from the charity stripe to get the win. The visitors led 36-28 with 9:29 to play before SC State rallied to within a single point.

SC State also got eight points from Heniaya Moton, six form Chrisana Scott and five points and nine boards from Jacquece Alston in the loss, the third time in as many outings for the Lady Bulldogs. Smith’s team fell to 2-15 on the season and 1-3 in the MEAC.

FAMU was paced by Shalaunda Burney-Robinson, the game’s only other double-figure scorer with 16 points and a game-high 11 rebounds. The Lady Rattlers improved to 4-12 and 2-3 in the league

SC State held a 10-8 lead in the low-scoring affair after one period before the two teams went to the locker room deadlocked at 19-19. The visitors took a 34-28 lead after three.

Florida A&M enjoyed a huge 58-38 edge on the boards, however both teams struggled from the floor with the Lady Rattlers connecting on just 21.7 percent of its chances to 22.0 percent for the Lady Bulldogs.

SC State returns to the court Monday when the Lady Bulldogs host Maryland Eastern Shore in a MEAC doubleheader, beginning at 5:30 p.m.