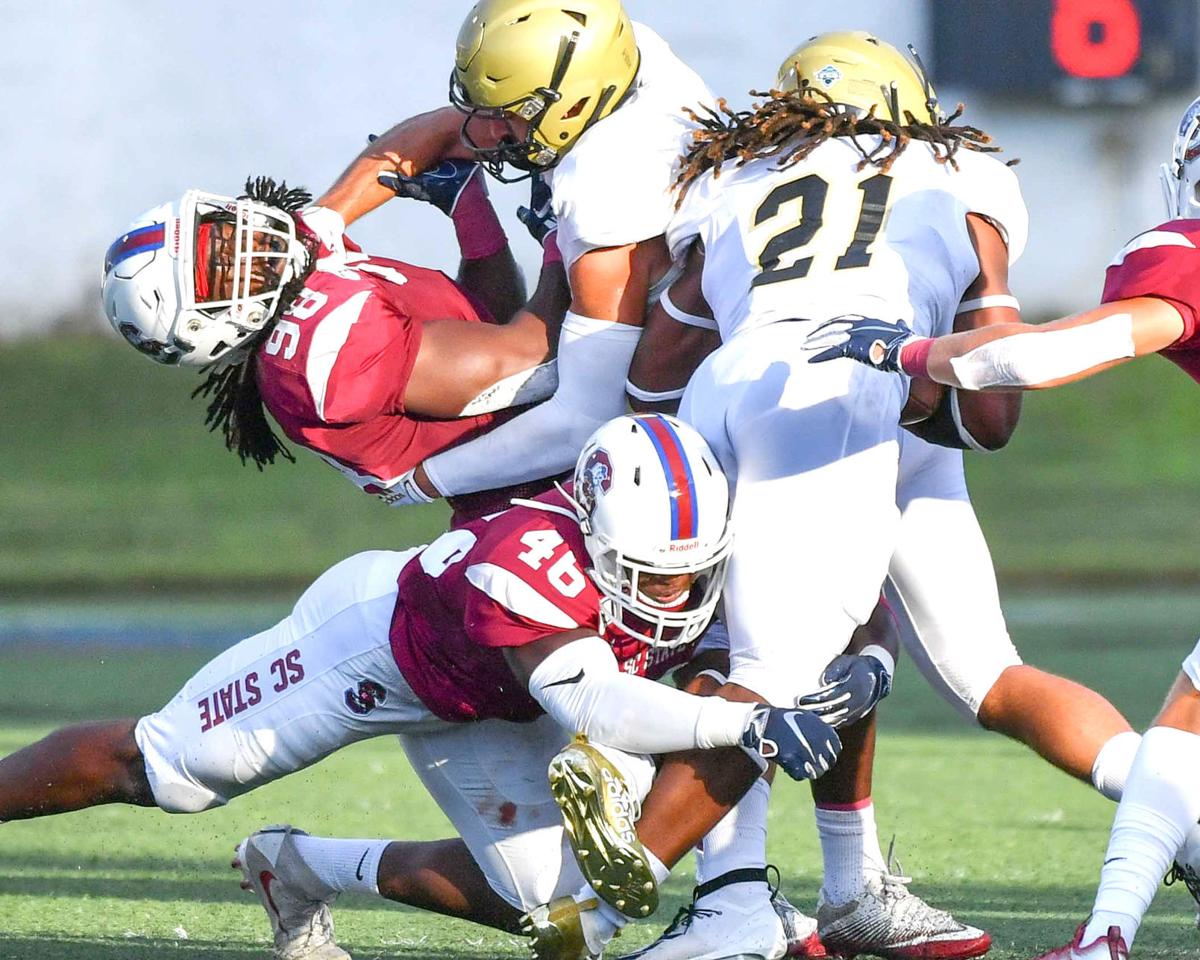 SC State senior linebacker Cornelius Walker (46), a product of Orangeburg-Wilkinson, makes a tackle on Wofford fullback Nathan Walker (21) during a play in the first half of the Aug. 31, 2018, season-opening home win for the Bulldogs. Walker led the Bulldogs in tackles with 8.5 stops. 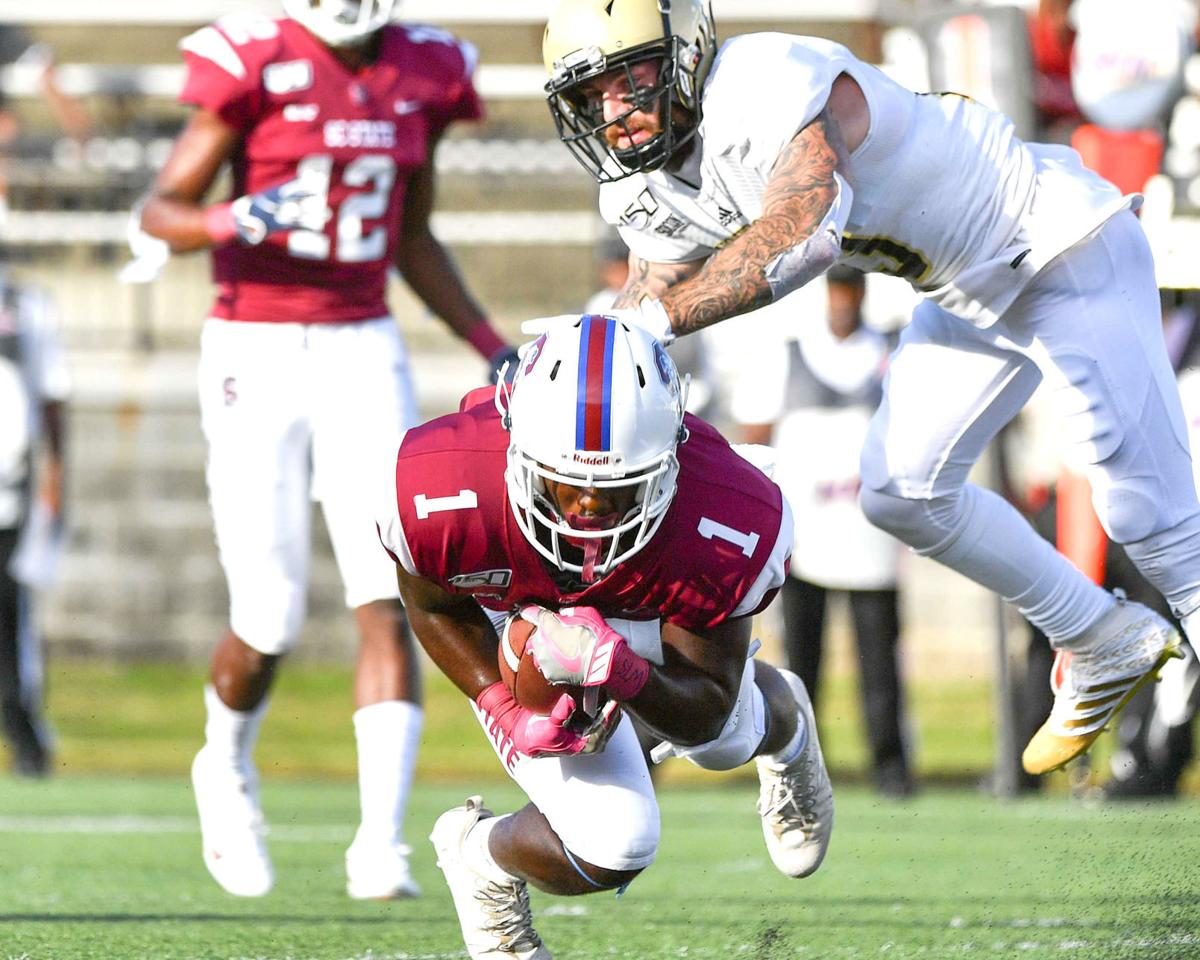 SC State senior linebacker Cornelius Walker (46), a product of Orangeburg-Wilkinson, makes a tackle on Wofford fullback Nathan Walker (21) during a play in the first half of the Aug. 31, 2018, season-opening home win for the Bulldogs. Walker led the Bulldogs in tackles with 8.5 stops.

There were questions entering the weekend as to whether or not the South Carolina State football team could play with the two-time defending Southern Conference champions from Wofford College in Spartanburg.

For four quarters on Saturday inside Oliver C. Dawson Stadium, the Bulldogs had their way, making play after play in a 28-13 season-opening win against the Terriers, the 8th-ranked team in the NCAA FCS rankings.

The Bulldogs (1-0) posted 201 yards passing, rushed for 75 yards and 3 touchdowns, and showed a balanced offensive attack for the opening game of the season.

Meanwhile, the SC State defense disrupted nearly everything Wofford (0-1) tried to accomplish, making 9 tackles for loss and picking off 4 interceptions.

Bulldogs head coach Buddy Pough couldn't have asked for a better way to start his 18th season at the helm of the S.C. State program.

"Our kids made some plays and they turned the ball over, so our defense took advantage of that; our defense stopped them for all practical purposes for most of the game," Pough said. "Once they got out of their element, once they couldn't run the ball and we got up on them a little bit, that's an uncomfortable position for them.

"I felt like, eventually they would make some mistakes, because that (passing) is not their game. We just caught them at a great time. This feels a bunch different than we felt after most games last year. And now we have another home game next week. We've got a guy or two who are kind of fun to watch."

Wofford had 306 total yards, with 129 rushing yards, but there was never a time in the game where the Terriers moved the ball consistently until the touchdown drive late in the fourth quarter. The Terriers were led by senior quarterback Joe Newman with 57 rushing yards and 114 passing yards.

“My hat is off to South Carolina State, as they did a great job of executing what they wanted to execute and manhandled us up front,” said Wofford second-year head coach Josh Conklin. “Our offensive line did not do a good job up front and you can’t overcome turning the ball over like we did.

"We will solve the problem and get it fixed. I am not going to push the panic button after one game.”

Wofford has an off week before playing host to Samford on Saturday, Sept. 14.

Redshirt freshman Shaq Davis led all receivers with 5 receptions for 91 yards, while senior De'Montrez Burroughs added 4 receptions for 102 yards and a touchdown.

Starting tailback Tyshawn Baines collected 22 yards on 6 carries in the first half, before leaving with an injury and returning to the sideline with crutches and without his helmet or pads. Datron James and Labron Morris handled the rushing duties in the second half, with James finished the game with 13 yards and a touchdown, while Morris added 4 yards and a touchdown.

Redshirt junior punter Cliff Benjahmin (Lake Marion) had a good night booting the ball, with 6 punts, an average of 43.2 yards per punt, a 50 yarder and one punt left inside the Wofford' 20-yard line.

The Bulldogs scored on their opening drive and never trailed in the contest.

The Bulldogs got the ball to open the game and used a 37-yard pass from Nick to Shaq Davis to move across midfield. From there, Nick found Burroughs in the middle of the end zone near the goal line for an 11-yard touchdown pass and the early lead at the 11:59 mark of the first quarter. Dillon Bredesen made the first of his three extra point kicks of the game for a 7-0 lead.

On the first possession for the Terriers, a 29-yard catch by T.J. Luther moved the ball inside the 20-yard line. Newman was sacked on third down and a 38-yard field goal attempt by Luke Carter was wide left.

After a Bulldogs' punt, the Terriers finished a drive, with 55 seconds left in the first quarter, with a 31-yard field goal from Carter for a 7-3 score.

Midway through the second quarter, a 48-yard completion from Nick to Burroughs gave the Bulldogs a first down inside the five-yard line. A one-yard touchdown run by Nick gave S.C. State a 14-3 lead at the 7:04 mark before the half.

Miller Mosley came on to quarterback for Wofford, but was picked off by B.J. Davis at midfield. A 39-yard pass was completed by Nick to Burroughs to get the Bulldogs to the five-yard line, but a penalty pushed the Bulldogs back to the 27-yard line. George Gbesee then picked off Nick in the endzone with 27 seconds left in the first half. The Bulldogs led 14-3 at the break.

To open the second half, Wofford went three-and-out and punted. The Bulldogs had one first down before punting back to the Terriers.

Newman was intercepted by Decobie Durant and the Bulldogs took over at the 32-yard line. James then capped off a 7-play drive with a 2-yard touchdown run for a 21-3 lead at 7:03 in the third quarter.

Wofford gained four first downs on their next possession and drove inside the 10-yard line before settling for a 29-yard field goal by Carter for a 21-6 score with 38 seconds left in the third quarter.

On Wofford's first series of the fourth quarter, Newman was picked off by Johnell Brown at the Terriers' 45-yard line. The Bulldogs had one first down and then missed a 41-yard field goal attempt.

Wofford had one first down and then Joe Newman was intercepted by Jaylen Evans and the Bulldogs took over at the 34-yard line. Morris capped a 5-play, 34-yard drive with a two-yard touchdown run for a 28-6 lead with 6:41 left to play.

The Terriers' best drive of the night covered 57 yards in 8 plays and ended with an eight-yard touchdown run by Irvin Mulligan for a 28-13 score with 1:29 remaining in the game.

Get UP for the Bulldogs!,