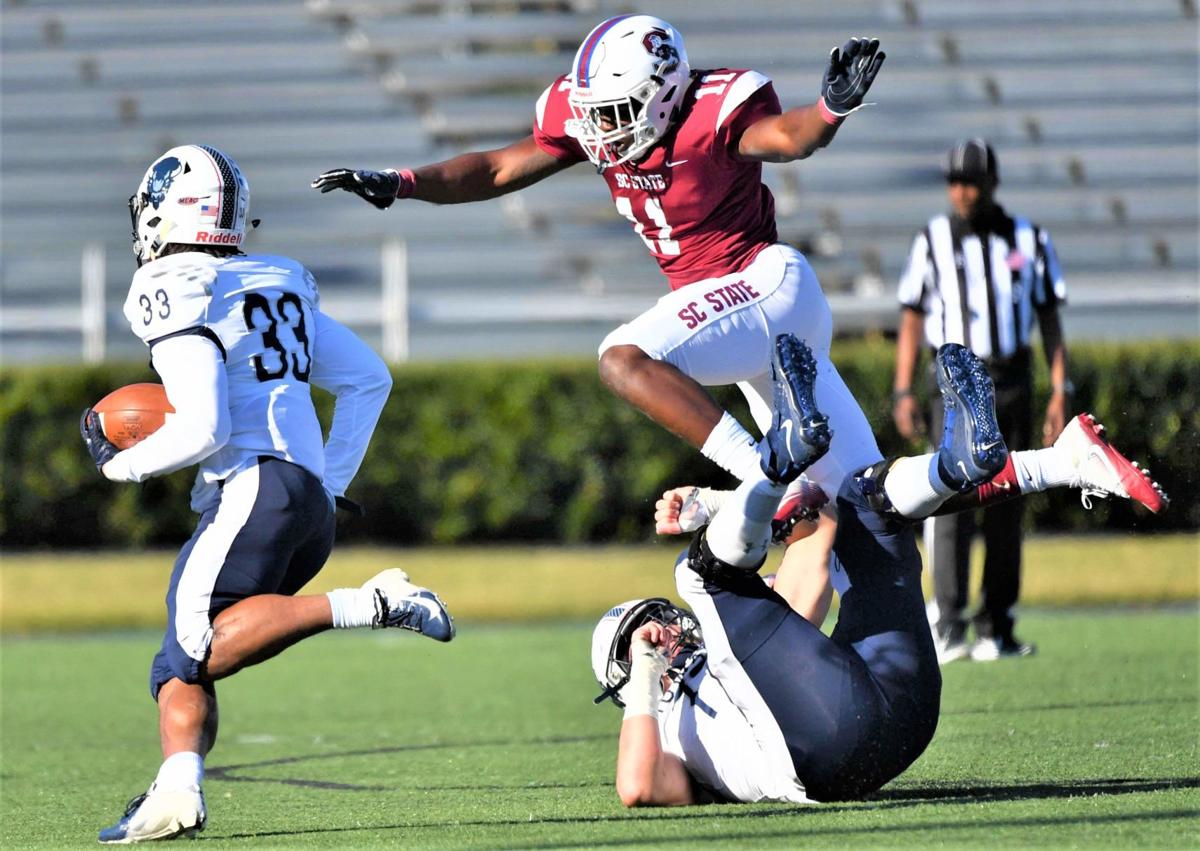 South Carolina State redshirt senior linebacker Chad Gilchrist (11) goes airborne to close in on a tackle of Howard tailback Josiah Crute (33) during the Bulldogs' 62-21 win in their home finale this season on Nov. 9. 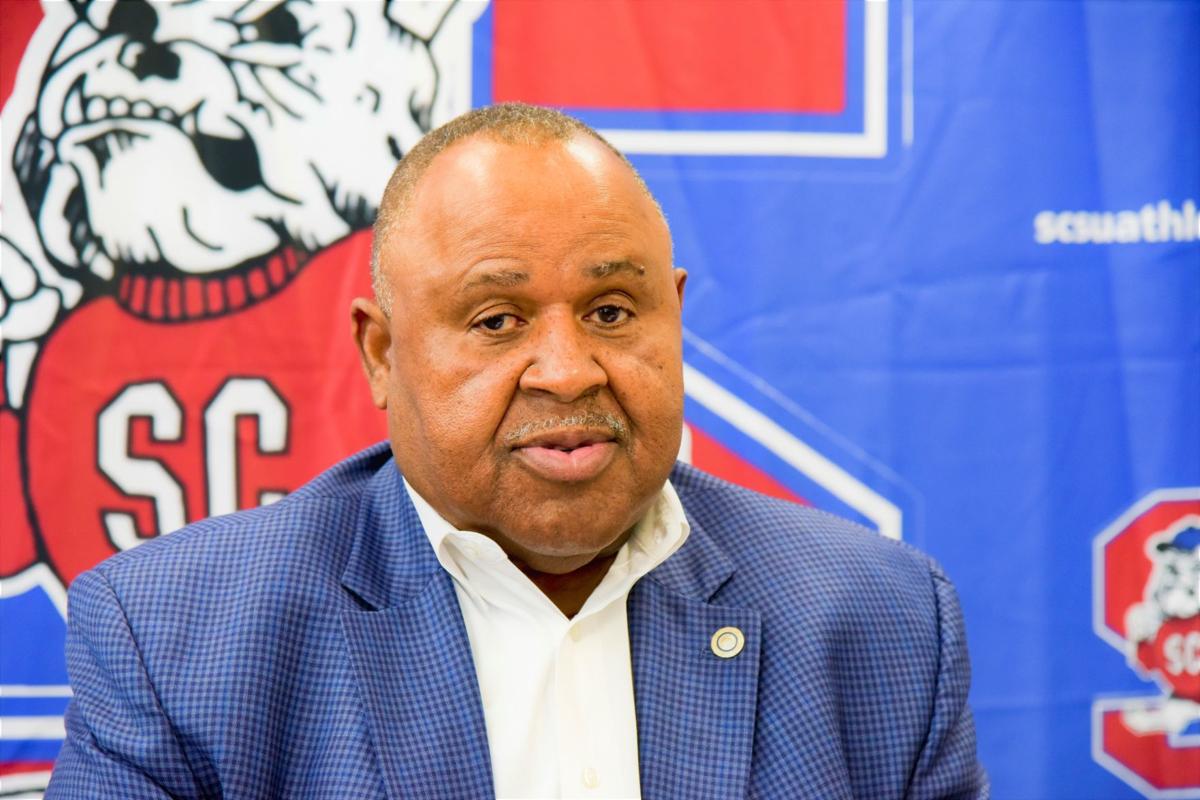 Buddy Pough talked about his team's 2019 season at his final press conference of the campaign on Monday. In his 18th season at the helm, Pough led the Bulldogs to an 8-3 record, including a 6-2 Mid-Eastern Athletic Conference record, and a share of the MEAC Championship, which is the program's 17th and seventh under Pough's guidance.

It kicked off with a big home win against a nationally-ranked Wofford team, and it ended on Saturday in Virginia with a gutsy overtime win that took two clutch field goals in steady rain.

The 2019 football season for South Carolina State University had plenty of ups while posting an 8-3 overall record, along with a 6-2 record in Mid-Eastern Athletic Conference play.

And changing starting quarterbacks mid-season led to 5 wins in the final 6 games, despite the original starter leading to the Wofford win and a 5-touchdown passing day in a win at Delaware State.

SC STATE FOOTBALL: No playoff bid for Bulldogs; Furman, Wofford are in

"We finished 8-3, tied for the conference lead; we are 2019 co-MEAC champions, so I'm excited for our team, for our university and for our town," Bulldogs head coach Buddy Pough said at his end-of-season press conference on Monday, after completing his 18th season at the SC State helm. "It's a welcome achievement, with the fact that these guys were picked to be sixth and seventh (in preseason polls).

"To be at this point is a tremendous accomplishment for our team. I'm excited about the development of our team. We developed a good little group of young guys. I think we have a chance to be a good team next year. But, we'll see what happens from this point on."

With fellow MEAC co-champion NCA&T headed to represent the conference in the Celebration Bowl - thanks to that 2-point win by the Aggies in Orangeburg - the Bulldogs are doing what every other MEAC team is doing, reviewing the season and planning for the future.

"It's a lot better feeling, I guarantee you, this year than it was last year at this time," Pough said. "We were sitting here trying to figure out if I ought to come back, and I didn't know if I wanted to come back, myself; and the university definitely wasn't sure. We were working at it, moving along in a very cautious manner.

"I'm sure everybody is feeling a lot better today, about where we are, than where we were this time last year. I found out yesterday (with the FCS playoff teams being announced) that we weren't going to be able to play any more, and that was a downer. Yeah, we didn't make it, but we had a good year, despite having like five ACL surgeries, and even I had (elbow) surgery. We had the credentials to be in (playoffs), and it just didn't happen."

When one of the biggest off-season concerns of Pough and his coaching staff will be replacing the punter (graduate student Cliff Benjamin from Lake Marion High School), it is obvious the returning players at many positions will be looked to for another solid season in 2020.

"We've got really good pieces returning, skill outside players, running backs, quarterbacks, and on defense we return pretty much all of our secondary and linebackers," Pough said. "We're going to take (in recruiting) mostly up front guys on defense, tackles and inside guys. We haven't taken those kinds of guys in a while.

"If we can find those guys and a punter for next year, we've got a chance to be pretty good. We're on about the task of replenishing this team and putting the pieces in place for the 2020 year."

Many of those pieces were in uniform for the Bulldogs this year.

"It's so good when you have freshmen who can come in and play right away," Pough said. "I think I counted 6 guys, at our pre-game meal on Saturday, who are young guys and I think are top-notch guys who could develop into NFL guys.

"If we can continue to gather that kind of talent, mostly from the South Carolina area, then we've always got a chance to have a really good team here."

STATS OF THE SEASON

The Bulldogs played great on special teams this season, including the final two made field goals by sophomore Dillon Bredesen to get SC State into overtime at Norfolk State on Saturday and then to win in the extra period. Graduate student Deondre Daniels and sophomore Jaydon Brunson tied with many at No. 2 nationally with a punt return for a touchdown apiece. And through this past weekend's national schedule of games, the Bulldogs are tied at No. 1 in the nation (in FCS rankings) for blocked kicks, having blocked 9 this season. SC State is tied with Harvard for the national lead.

SC State also led the MEAC in passing yards per completion, with 15.62 yards per reception, good enough for 8th in the nation.

The Bulldogs had a resurgence on defense in 2019, leading the MEAC in team passing efficiency defense with an average of just 104.38 yards per game, good enough for 2nd in the nation just behind defending national champion North Dakota State (101.27). SC State also finished the season ranked No. 2 in the nation in team tackles for loss, with 9.4 per game, just short of national leader Sam Houston State (10.9 per game).

Senior De'Montrez Burroughs (46 receptions for 938 yards, 20.39 yards per reception) was 2nd in the MEAC with 13 touchdown receptions, good enough for No. 5 in the nation.

Although the Bulldogs held tight to their position from the previous week, FAMU dropped out of the No. 1 spot in both polls, with its loss to rival Bethune-Cookman. NCA&T is No. 1 in the media poll, while Alcorn State is No. 1 in the coaches poll.

More in Buddy and his Bulldogs: S.C. State celebrates coaching milestone (11 of 13)

SC STATE FOOTBALL: No playoff bid for Bulldogs; Furman, Wofford are in

The Celebration Bowl matchup in Atlanta Dec. 21 confirms what the coaches and media in the Boxtorow polls have been saying for the last severa…

The top two teams in the BOXTOROW Coaches and Media Polls combined to place eight players on the 13th annual BOXTOROW All-America team.

South Carolina State redshirt senior linebacker Chad Gilchrist (11) goes airborne to close in on a tackle of Howard tailback Josiah Crute (33) during the Bulldogs' 62-21 win in their home finale this season on Nov. 9.

Buddy Pough talked about his team's 2019 season at his final press conference of the campaign on Monday. In his 18th season at the helm, Pough led the Bulldogs to an 8-3 record, including a 6-2 Mid-Eastern Athletic Conference record, and a share of the MEAC Championship, which is the program's 17th and seventh under Pough's guidance.