S.C. STATE FOOTBALL: Defense strong at LB, DB, has holes to fill up front
0 comments
Share this
{{featured_button_text}}
1 of 2 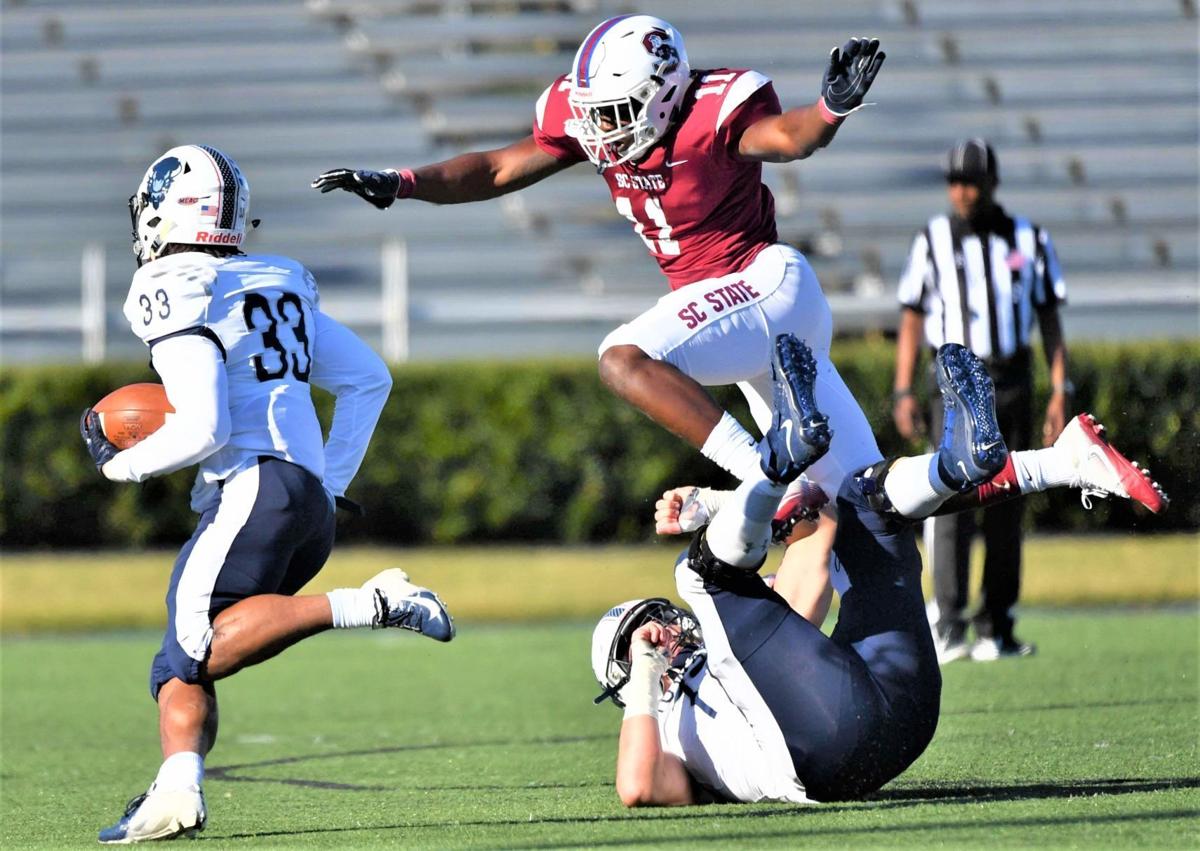 South Carolina State linebacker Chad Gilchrist (11) goes airborne to close in on a tackle of Howard tailback Josiah Crute (33) during the Bulldogs' 62-21 win in their home finale on Nov. 9, 2019. 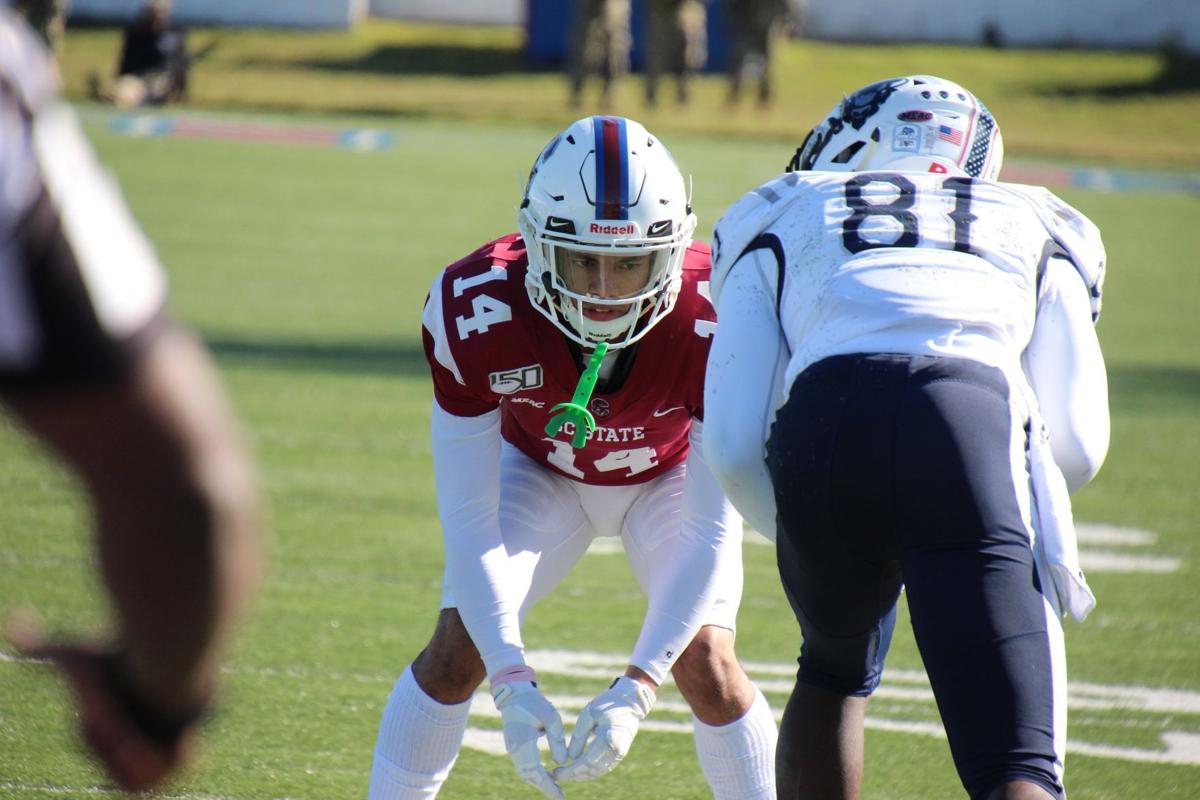 Over the years, defense has been a staple of South Carolina State football teams. Even in the early years when the Bulldogs played in the Southern Intercollegiate Athletic Conference (SIAC), defense was usually the team’s strength, but it became a real hallmark when head football coach emeritus Willie Jeffries took over the reins of the program in 1973.

What will the 2021 abbreviated spring season bring for S.C. State and its defense? Looking back on the 2019 campaign, it was usually the defensive front setting the standard for the Bulldogs, harassing opposing quarterbacks and shutting down rushing attacks. The linebacker corps featured talented players quick to the ball, while the secondary would – to use a cliché -- bend but not break while making one big play after another.

The style has continued under Coach Buddy Pough, who is in his 19th season as Bulldog head coach. He played for Jeffries -- albeit on offense -- and succeeded his college mentor in 2002, so he knows the history of S.C. State’s usually bruising and punishing defenses.

However, back on Jan. 22 when Coach Buddy Pough, his staff and players began preparing for the upcoming spring schedule, which will kick off in less than two weeks, a quick assessment of the defense revealed that S.C. State’s defensive line did not have any returning starters. The linebacker position, however, despite two key losses, should see little drop-off in talent, while the secondary returns intact – good news, indeed.

“Anyone that’s familiar with S.C. State football knows what defense has meant around here,” said Pough recently. “We’ve always thought that by playing good defense, you always had a chance. And it usually started with our upfront guys.

“But this year,” we have some key losses on the D-Line. In fact, we lost three starters and the fourth will sit out the spring season. So, it’s going to be one of those years where we are going to have to dig deep. We will be young, with only one player returning with any game experience, but we have some pretty good talent at the position and we hope it develops quickly.”

Both Jonathan Saxon, the Bulldog defensive coordinator/linebacker coach, and defensive line coach and assistant head coach David Blanchard have concerns about the youthful defensive front, but both expressed some optimism because of the talent level of the newcomers the team will be counting on.

The Bulldogs helped themselves immensely during the 2020 recruiting cycle, signing seven defensive linemen in a class of 19 total commitments. Four of the seven are listed as the top backups on the current 2021 depth chart. An additional four defensive linemen are in the recently signed 2021 recruiting class announced during National Signing Day last Wednesday.

“We will work hard to make sure the young players stepping into starting positions raise their play to the level we will need to be competitive,” Saxon said. “We think they can rise to the occasion. In fact, they are going to have to.”

Blanchard, who has been defensive line coach throughout Pough’s tenure, said the Bulldogs will have to survive some growing pains this spring as S.C. State will field its most inexperienced defensive line since he began coaching the position in 2002, Pough’s inaugural season as head coach.

“We have only one returning defensive linemen with major playing experience, and that’s sophomore end Patrick Godbolt (6-3, 240 So.),” Blanched said. “We have no returning starters, so there will be some growing pains. Our 2020 recruiting class will be a big help because we had about seven D-Lineman among the signees and several of them are quite talented. We need them to grow up quickly.”

There is less concern for the Bulldogs at linebacker, where Johnell Brown and Orangeburg’s Cornelius Walker are the only losses. Chad Gilchrist (6-5, 220 r-Sr.), BJ Davis (6-2, 190 r-So.), both starters, and Orangeburg native Chris Simmons (5-11, 210 r-Jr.) are all veterans, with loads of experience.

“Expectations are high within the linebacker group,” Saxon said. “We had a couple of losses but return multiple players at the position who made major contributions to the overall 2019 defense. We expect this group to take another step forward.”

Davis was fourth on the team in total tackles with 41, including nine for loss, and recorded two interceptions – one returned for a touchdown – and nine pass breakups, second on the team. Gilchrist who was sidelined for two games, had 30 tackles, seven behind the line, along with two sacks, while Simmons, who played in eight games as a reserve, had nine tackles, two for loss.

Pough and his staff are all smiles when you mention the Bulldog secondary, which led the MEAC in pass defense efficiency (104.4), was second in overall both pass defense (199.8 ypg) and interceptions (14), and helped S.C. State claim the number two spot in total defense (322.4 ypg) and the top ranking in scoring defense (20.3 ppg).

The defensive secondary is the most experienced position on the team that is scheduled to host Norfolk State Feb. 20. All four starters are back, along with a number of top reserves with key experience.

All-MEAC cornerback Decobie Durant (5-11, 180 r-Jr) leads the unit. The Lamar native was sixth on the team in tackles with 35, including four for loss, and also topped the secondary with three interceptions, 12 pass breakups and 15 passes defended.

Cliff Benjamin, the very capable punter from Santee, has departed, along with dependable long snapper Josh Pringle, creating some vacancies in this key area. Third-year placekicker Dillon Bredesen may also be called on to handle the punting duties this season, with freshman Dyson Roberts (5-11, 190 Fr.) as the backup, in this critical area.

Next week, we will take a look at the spring schedule opponents and expectations around the league.

S.C. STATE FOOTBALL: Status of opener unclear after Norfolk drops out of season

If South Carolina State opens the spring football season on Feb. 20, it won't be against Norfolk State.

Playing football in the spring gets more and more complex for South Carolina State.

South Carolina State linebacker Chad Gilchrist (11) goes airborne to close in on a tackle of Howard tailback Josiah Crute (33) during the Bulldogs' 62-21 win in their home finale on Nov. 9, 2019.