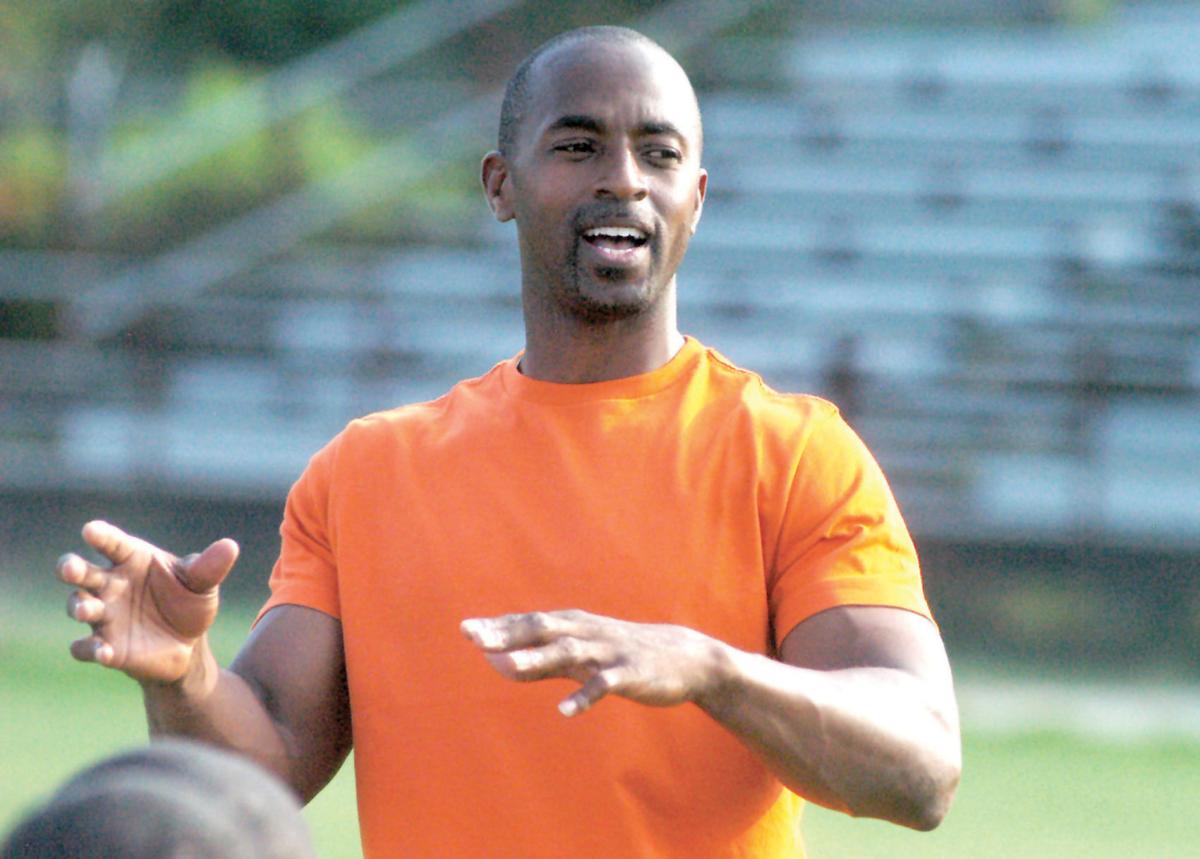 Former South Carolina State and NFL standout Dwayne Harper speaks to local athletes in June 2010. Harper is one of five inductees in the MEAC Hall of Fame for 2019. 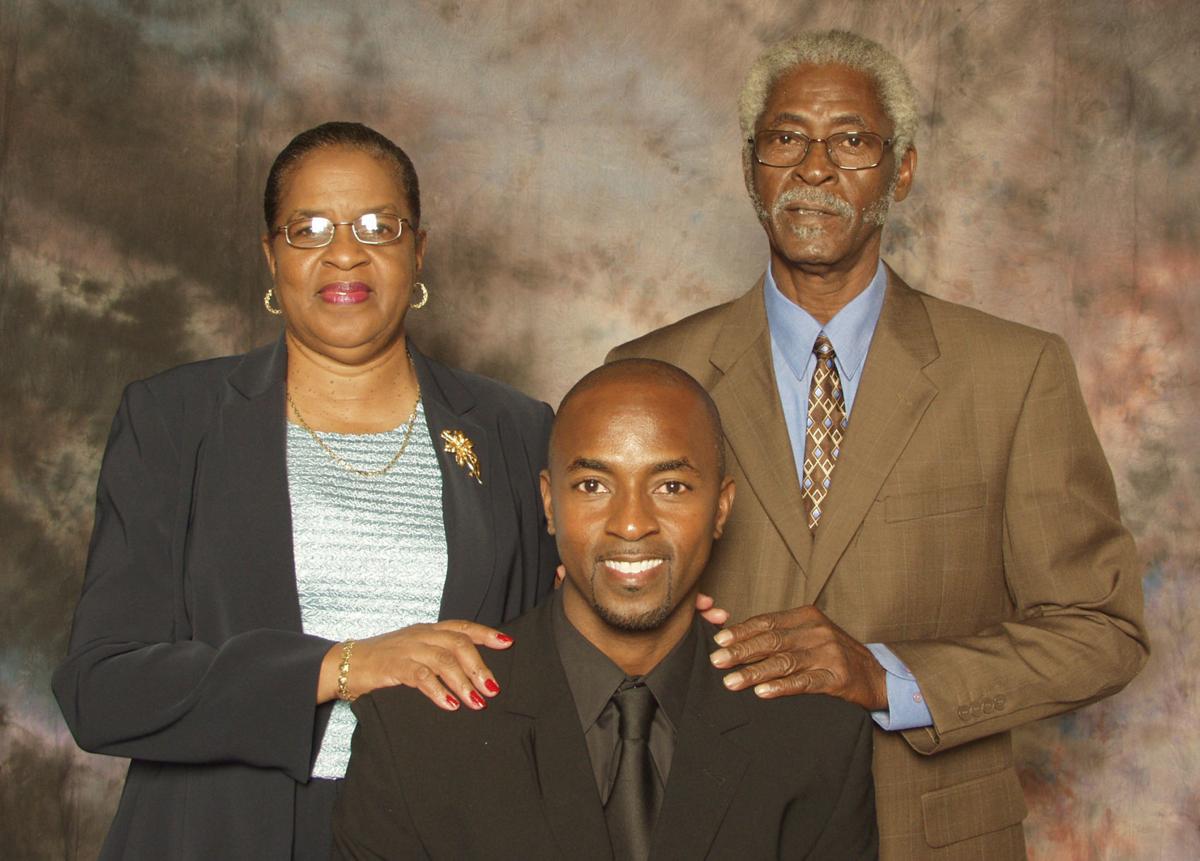 Dwayne Harper and his parents during the South Carolina State Centennial Week Celebration in 2007. He credits his mother with telling him to remain at S.C. State his freshman year and his father's coaching with building his self-confidence.

From Deacon Jones to Donnie Shell, from Harry Carson to Barney Bussey, from Robert Porche to Javon Hargrave and Darius Leonard, the Bulldogs seem to have always boasted athletes dedicated to the proposition of shutting down opposing offenses.

Dwayne Harper, a member of the 2019 Mid-Eastern Athletic Conference Hall of Fame Class, belongs on that list as well, but his hall-of-fame career wearing the garnet and blue nearly ended before it began.

Harper was an unheralded and undersized cornerback who had played quarterback at Orangeburg-Wilkinson High School against his wishes because that was what the team needed. South Carolina State was the only school that recruited him, but the Bulldogs didn’t expect a lot when they signed him.

Harper confounded the coaching staff by outplaying all the other Bulldog corners in preseason camp. He was rewarded by being left off the traveling squad for S.C. State’s season opener at Furman. It was a move that didn’t sit well with Harper, who strongly considered quitting the team.

Only a mother’s wisdom convinced him to stick it out.

“She said, ‘Where are you going? You’re on scholarship and going to school for free,’” Harper said.

Harper stayed at S.C. State. He was in the starting lineup the next week against Delaware State. A career that led to 12 seasons in the NFL was launched.

Harper is joined in the 2019 MEAC Hall of Fame Class by:

“It’s definitely an honor to be selected to the MEAC Hall of Fame,” Harper said. “I’ve always been that unsung hero, not being highly recruited by South Carolina State and coming from a small town. There are so many other guys I grew up watching who should be in the hall of fame, like Charley Brown and William Judson, even one of my coaches – Bill Davis. It’s just an honor to be selected.”

The sting of being left off the traveling squad remained with Harper after he became a starter and gave him added motivation. He already had a chip on his shoulder knowing the Bulldogs didn’t consider him one of their top recruits. Having to remain in Orangeburg for the opener turned that chip into a cinder block.

Harper says to this day no one has explained to him why he was left behind, nor does he understand why it happened that way.

“I was one of the best corners they had on the team,” he said. “I was better than some of the upperclassmen they took on the trip. I don’t know if they didn’t think I was mentally ready. I thought I had proven myself.”

The next week Harper showed that his self-confidence wasn’t misguided when the Bulldogs faced Delaware State. He was in the starting lineup, and his assignment was to cover John Taylor, who would be named the MEAC Offensive Player of the Year and later won three Super Bowl rings in nine seasons with the San Francisco 49ers. Harper had an interception and broke up a couple of passes.

Being a freshman, Harper wasn’t fully aware of who Taylor was. His teammates only told him that Taylor “was the real deal. He can do it all. He can go downtown.”

“I said I’m going to do exactly what I did in camp,” Harper said. “I said was going to use my technique against John and run with him. I was a guy who could run. I took that into the game. We didn’t win, but I had a great game as a freshman.”

Harper: It starts here, when you are young

Harper’s self-confidence left him in good stead throughout his career at South Carolina State. He was a two-time first-team All-MEAC pick as well as a two-time All-American. He tied Donnie Shell’s school record – since broken by Ricky Hill – with eight interceptions in 1987.

Harper says his self-confidence goes back to the coaching he received from his dad, who was his Pee Wee League coach.

“It’s my upbringing,” he said. “It comes from having that heart. You have to have that heart. Not in a negative way, I have that natural dog in me as a football player. I don’t care who lines up in front of me, I’m going to accept the challenge and it’s going to be a tough day for you also.”

Harper made a smooth transition to the NFL after the Seattle Seahawks made him their 11th-round pick in the 1988 draft. He played in all 16 games with one start his rookie season. He moved into the starting lineup at left cornerback his second year.

“I was very prepared (for the NFL),” he said. “The system and the coverages that we ran were the very same as at South Carolina State. It was a very easy transition. My DB coach my rookie year was like, ‘Are you sure you don’t have any questions?’ A pro camp is hard, but not as hard as at black colleges. At black colleges, you run all day. Pro camp, you’re out there two hours. You stay on schedule. I could run all day, and I was going from Orangeburg, where it was 100 degrees all the time, to Seattle, where it was a nice 85 degrees.”

Harper spent six seasons with Seattle before signing a free agent deal with San Diego, where he played five more seasons with the Chargers. He fractured his neck in his final season, but still came back for a 12th season with the Detroit Lions before retiring. Harper attributes his longevity to his consistency and taking care of his body. From week to week, coaches knew what they could expect from him, and they knew he would be available to play.

“Playing this game, you have to be consistent in the right way if you want to stay around,” he said, “not consistently getting beat, not giving up the deep ball, not blowing coverages and I just took care of my body. I had good time in the NFL. I didn’t abuse my body and use drugs. Working out became a part of my life. I always enjoyed that, being great shape and being ready to go every season. I would be ready to go every season. That’s a big reason I stayed so long.”

Harper ended his career with 24 interceptions, 571 tackles, 10 forced fumbles and one touchdown. He appeared in Super Bowl XXIX with the Chargers.

“I probably could have begged some teams to come back for another season,” he said. “I was at the point where I said, ‘I had my opportunity.’ I had saved money and did some good things. I moved on.”

Harper has become a businessman in his post-playing career. He and his wife own three Massage Envy franchises with locations in Augusta, Ga., Columbia and Lexington.

Oddly enough, Harper grew up in Orangeburg not far from the S.C. State campus. He idolized the Bulldogs – especially receiver Charley Brown and defensive back William Judson. But he didn’t necessarily want to attend S.C. State. Like so many other high school athletes, his sights were set on playing for a major program. He did visit the University of Georgia, but they weren’t interested in a 160-pound quarterback who would have to convert to cornerback.

“I think if I had played defensive back all the way through high school, I probably would have gone somewhere else,” Harper said. “I’m happy the way things turned out the way they did.”

The 2019 class of the Mid-Eastern Athletic Conference Hall of Fame will be officially inducted on Thursday, March 14, at the Sheraton Norfolk Waterside Hotel in Norfolk, Va. Festivities will begin with a reception at 9:30 a.m.

In addition to the ceremony, the class of 2019 will be recognized during halftime of the 6 p.m. men’s basketball game at the 2019 MEAC Basketball Tournament in Norfolk's Scope Arena.

The MEAC Hall of Fame highlights former student-athletes, coaches, university and conference administrators, as well as special contributors, who have enriched the legacy of the conference since its inception in 1970. Enshrinees were selected by a 13-person committee made up of administrators and representatives from member institutions.

The inaugural class was inducted on May 29, 1981, during a 10-year anniversary banquet in Greensboro, N.C. Since its establishment, the MEAC Hall of Fame has enshrined 148 people, including the class of 2019.

Garnet and blue come together to provide exciting athletic competition for the local community throughout the year.

Former South Carolina State and NFL standout Dwayne Harper speaks to local athletes in June 2010. Harper is one of five inductees in the MEAC Hall of Fame for 2019.

Dwayne Harper and his parents during the South Carolina State Centennial Week Celebration in 2007. He credits his mother with telling him to remain at S.C. State his freshman year and his father's coaching with building his self-confidence.