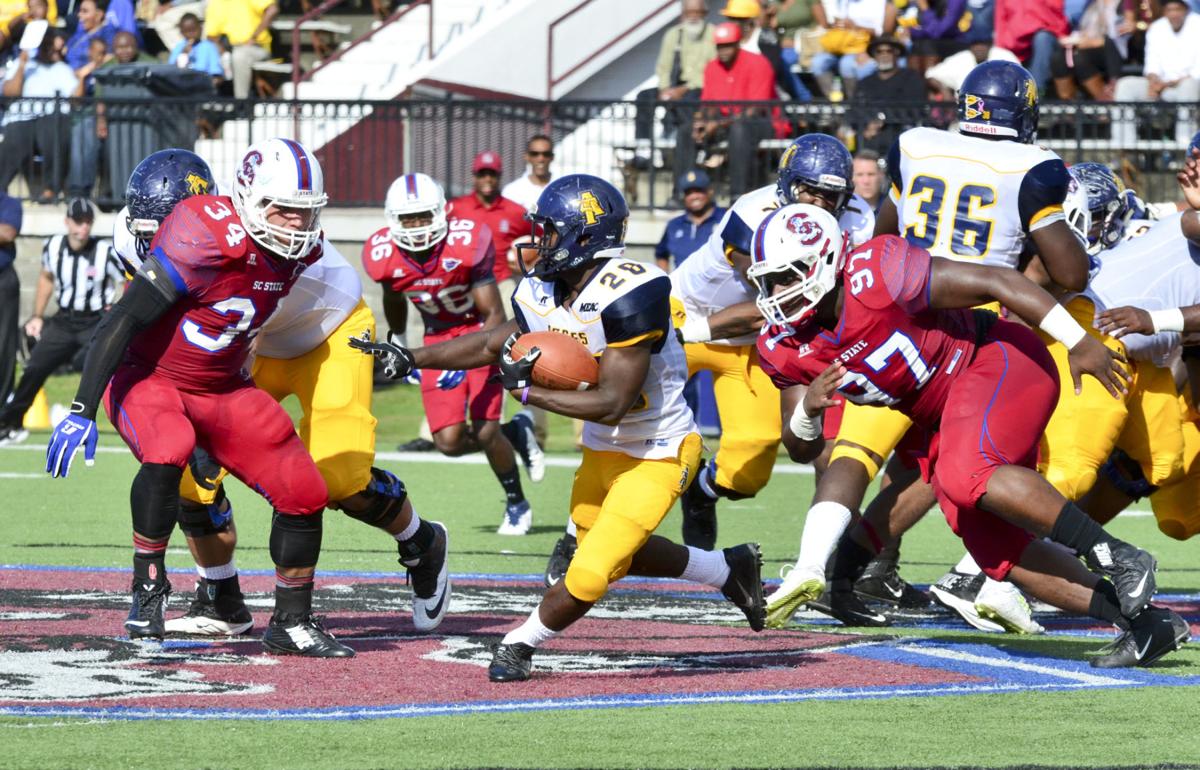 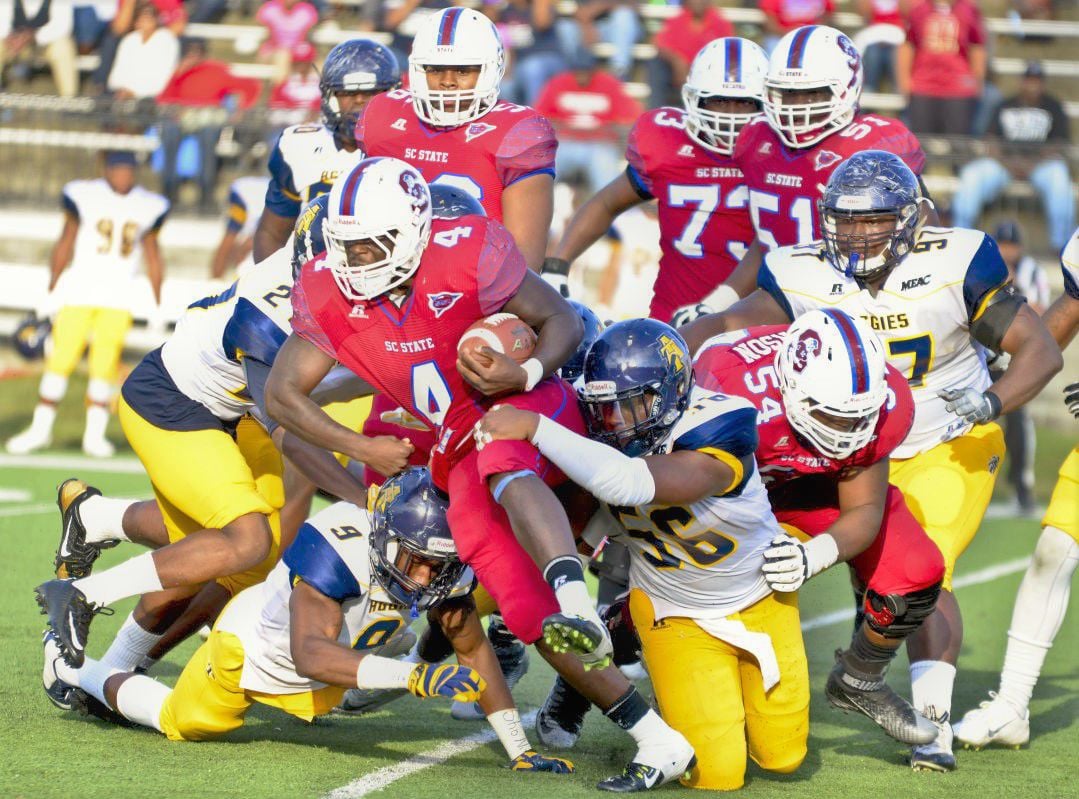 S.C. State senior tailback Jalen "Scoot" Simmons, later signed by the Panthers, Chargers, Giants and Cardinals, runs the ball against North Carolina A&T in the final home game for the Bulldogs in 2015. The Aggies took a 9-6 win.

Last week, we discussed North Carolina A&T’s decision to leave the Mid-Eastern Athletic Conference in 2021 after 50 years of membership and the ensuing debate on how the Aggies’ move to the Big South Conference would impact the MEAC.

The Aggies will become the second MEAC university in three years to bolt to the Big South. Hampton left in 2017.

This week, we examine how N.C. A&T has fared — in terms of success and championships — during its tenure in the MEAC, and also take a look at its rivalry with South Carolina State for sports supremacy in the conference.

The MEAC was chartered in 1970 when six Central Intercollegiate Athletic Association schools — Delaware State, Howard, Maryland Eastern Shore, Morgan State and North Carolina A&T — along with South Carolina State of the Southern Intercollegiate Athletic Conference came together to form a league whose primary goal was to eventually seek Division I status for its sports. The first competition was the 1971 football season.

The dream of becoming a Division I conference was realized in 1980. By that time, the league had expanded to nine schools, with the addition of Bethune-Cookman and Florida A&M in 1979. Like S.C. State, both were former members of the SIAC.

MEAC membership swelled to 10 in 1984 when Coppin State, a non-football athletic program, was admitted. CIAA heavyweights Hampton and Norfolk State were added as full members in the 1990s, bringing the membership to 11.

Winston-Salem State (CIAA) and Savannah State (SIAC) were admitted as provisional members in 2007 and 2010, respectively, putting the membership at its all-time high of 13 institutions.

The league, today, also has three associate members — Augusta University in golf, and both Alabama-Birmingham (UAB) and Monmouth University in bowling.

However, since reaching its peak membership in 2010, the MEAC has watched as its fortunes have been dented, somewhat. Both Winston-Salem State and Savannah State eventually returned to the Division II ranks, and of course, Hampton left for the Big South in 2017.

Thus, today, the league has 11 programs, however, neither Coppin State nor UMES fields a football team, leaving the MEAC with just nine football-playing schools. That number will drop to eight when the Aggies leave at the end of the 2020-21 school year.

Through all the movement of schools throughout the soon-to-be 50-year history of the MEAC, S.C. State and N.C. A&T are among only four charter institutions that have maintained uninterrupted membership. Delaware State and Howard are the other two.

Every athletic program that has been a full member of the MEAC throughout its history has hoisted a championship trophy in a sport, including multiple times for most. However, an examination of the MEAC Record Book shows that South Carolina State and North Carolina A&T have led the way. The two programs have combined to win an estimated 180 conference championships, including nearly 100 in the three marquee sports of football, and men’s and women’s basketball.

The Bulldogs have been the most dominant in football, with 17 titles to 11 for the Aggies. NC A&T enjoys the advantage in men’s basketball, with 27 championships (11 regular season, 16 tournament) to 13 for the Bulldogs (eight regular season, five tournaments). In women’s basketball, the two universities are close in the number of titles captured, with the S.C. State women owning a 14-12 edge.

Let’s look at the head-to-head battle between the two MEAC powers in football. Perhaps we can examine the rivalry between the two schools in men’s and women’s basketball later.

S.C. State leads the football series 33-22-2. Remarkably, the Bulldogs captured 11 in a row in the rivalry from 2001 through 2011. Of late, the Aggies have been in control, winning the last five, including a 22-20 nail-biter in Orangeburg last season.

The Bulldog-Aggie rivalry in football rose to a new level after both joined the MEAC in 1970, however the series began some 46 years earlier in 1924, when the two first met on the gridiron. The result of that meeting: the Bulldogs suffered an old-fashioned 50-0 whipping.

By the time the two teams had their first MEAC matchup in 1971, which ended in a 0-0 tie, the Aggies were running away with the series with a 7-1-1 advantage. It was the first of two ties in three years between the two teams who fought to a 14-all deadlock in 1973, a game that some incredulous rumors said was fixed by Bulldog coach Willie Jeffries and Aggie head coach Hornsby Howell, his friend and mentor. Howell gave Jeffries his first college coaching job.

By the time the league attained its Division I status in 1980, the Bulldogs had closed the gap against the Aggies. N.C. A&T still led the rivalry 9-7-2, but had recorded only one victory in the series since 1972, as S.C. State was gaining traction in the rivalry, with N.C. A&T compiling only a 2-6-1 worksheet during the period.

One of the two Aggie wins during the span was a 15-14 controversial triumph in Greensboro in 1976, an outcome that is still debated today. The Aggie victory spoiled what would have been a perfect season for S.C. State and Jeffries, who formerly worked as an assistant for N.C. A&T on Howell's staff. The Bulldogs finished the year 10-1 — including a 26-10 win over Norfolk State in the Bicentennial Bowl — and were declared National Black Champions.

In the one-point 15-14 loss, the Bulldogs led 14-0 with about three minutes left in the contest. The Aggies scored in the final two minutes to close the gap to 14-7, then tried an on-side kick. Jeffries had his "hands" team in and a Bulldog wide receiver (the late Teddy Carter) clearly covered the ball, but there was no signal from the officials who let everyone pile on. During the pileup, the Aggies stole the ball from Carter and were awarded possession.

N.C. A&T went on to score and instead of kicking the PAT, forging a 14-all tie, Howell opted for a two-point conversion try and the win.

On A&T’s first attempt for a two-point conversion, the Aggie runner was stuffed, but an offside penalty was called against the S.C. State defense.

On the second attempt, a Bulldog defender knocked the pass attempt away in the end zone before pass interference was called on the Bulldogs.

On the third try, the Aggie runner was stopped short of the goal line, before another offside penalty was called, giving NC A&T a fourth attempt.

On the next try, the Aggie runner reached the end zone, giving the host team a controversial win. To say that Jeffries was visibly agitated is an understatement. One newspaper report noted he had to be restrained by his staff.

A year later, in 1977, the venue was Orangeburg and the S.C. State alums and boosters arrived early for the contest. The 1976 outcome was still etched in their memories.

The Bulldogs made sure those present would not have to wait long to witness on-field retribution. By the time the first quarter ended, the score was 35-0 in favor of Jeffries and the Bulldogs. The final margin was 52-0, but could have been worse, as many backup players were substituted liberally into the game in the fourth quarter.

Jim McKinley, a former assistant at Eastern Michigan, had replaced the retired Howell as Aggie head coach and in some pregame chatter had boasted that he was going to teach the MEAC schools how to play football. Instead, he was handed a rude welcome to the league.

The rivalry has produced a number of other memorable Bulldog-Aggie clashes:

The 2020 game between the two rivals is set for Oct. 31 in Greensboro. It will be homecoming for the Aggies. The matchup, if played — that dependent upon the progress the country makes in stemming the coronavirus pandemic — could be the end of a long, intense rivalry, as N.C. A&T leaves the MEAC for the Big South.

The Bulldogs and their alums and boosters would love to hand the Aggies a nice parting shot to take with them — a good whipping delivered by the Garnet and Blue!

S.C. State senior tailback Jalen "Scoot" Simmons, later signed by the Panthers, Chargers, Giants and Cardinals, runs the ball against North Carolina A&T in the final home game for the Bulldogs in 2015. The Aggies took a 9-6 win. 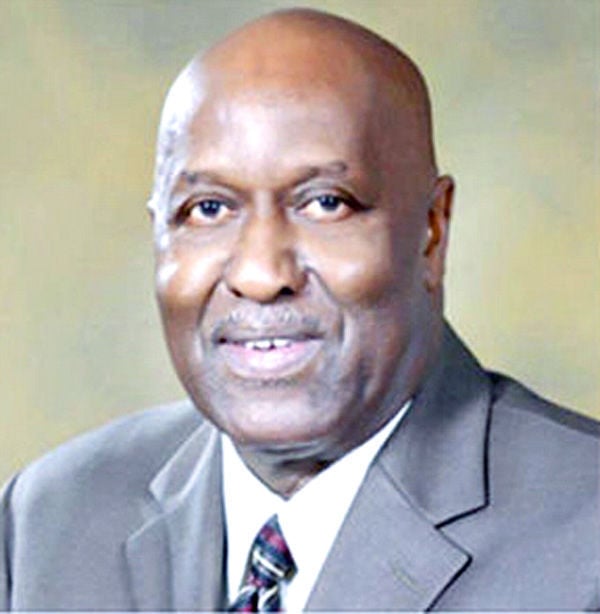