Become a Member
Read Today's E-edition
Share This
Bruinettes, Gilbert to face off — again
0 comments
Share this
1 of 2 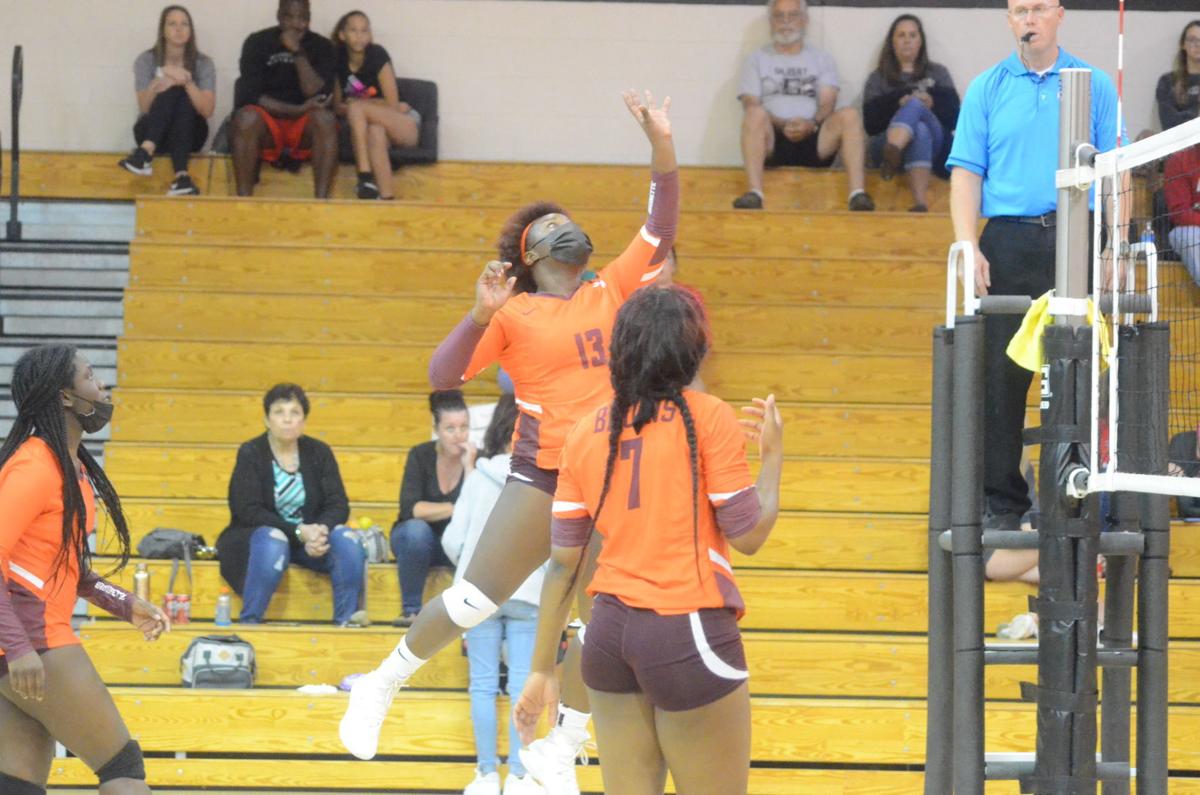 Orangeburg-Wilkinson hitter Stephany Brailey goes for a kill during a 3-0 loss to Gilbert Monday night. O-W will play host to the Lady Indians in Orangeburg Thursday. 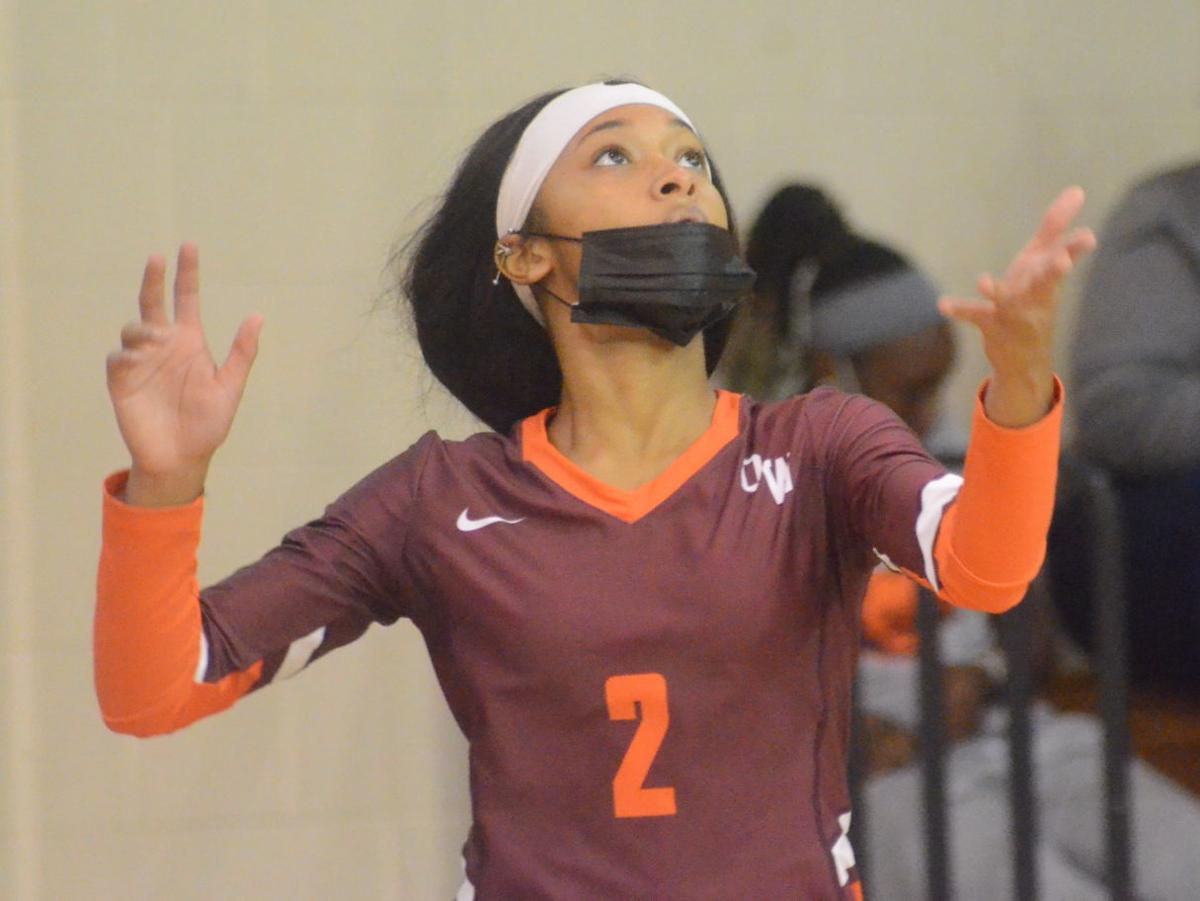 Orangeburg-Wilkinson's Mackenzie Morgan prepares to serve during the Bruinettes 3-0 loss at Gilbert Monday.

The loss puts O-W a game behind Gilbert in the region standings. Head Coach Denolis Wright said her team did not come prepared to play against the Lady Indians.

“We played scared,” Wright said. “We started off bad and waited until the end of the match to start playing to our usual level.”

Gilbert used an enthusiastic crowd to steal momentum early from the Bruinettes. GHS head coach Jackie Shealy told the Lexington Chronicle that her team was looking forward to facing O-W.

“We’ve already established a rivalry with (O-W),” Shealy said. “We had some very competitive play last year. The girls knew coming in that it was going to be a challenge.”

Last season, Gilbert and Orangeburg-Wilkinson split their two regular season matches, and were forced to play a one-game playoff to see who would claim the region championship. The Lady Indians were able to take a four-set match that was delayed due to a light malfunction at Swansea High School.

This year, there will be a quick turnaround as O-W and Gilbert meet in Orangeburg Thursday night. With a win, Gilbert will hold a one-game tiebreaker in the region standings. If the Bruinettes win, they will pull even in the region and could possibly force another playoff if both teams win out.

“The next game is going to be different,” Wright said. “We have to learn to show up for every match. It’s not like they’re not capable of playing (at Gilbert’s level), they were just rattled Monday. (Gilbert) had so much confidence from the start and we just coward away.”

Down 2-0, Orangeburg-Wilkinson grabbed an early 6-3 lead in the third game. As Gilbert came back, both teams traded shots until the Lady Indians took a lead late. Despite being down five points, O-W continued to battle and finally lost when a ball hit the ceiling and took a bad bounce back on to the Bruinettes' side of the court.

“I feel like if we could have taken that last game, could have had a chance,” Wright said. “We were starting to play better and I think we could have continued that momentum.”

Despite the loss, Wright was highly complimentary of hitter Stephany Brailey. She said the senior was one of the few players that showed up against Gilbert. Brailey led the Bruinettes in kills after coming back from an injury that had her sidelined for the first half of the season.

O-W was scheduled to face Brookland-Cayce Tuesday and will have a day of practice Wednesday before the rematch with the Lady Indians. Wright said she will try talking with her team in order to get them to settle down and focus on the upcoming match.

“It’s not a lack of skill, it’s just a mental thing,” Wright said. “(Talking) is one of the only things you can do. We have to learn to play through any type of change or adversity. It’s improving on the little things.”

O-W and Gilbert will face off Thursday at Orangeburg-Wilkinson High School.

It was a defensive battle in the Class A Lower State championship as Bamberg-Ehrhardt defeated C.E. Murray 7-6 to advance to the state title g…

Orangeburg-Wilkinson opened the season Tuesday with a 61-56 victory over Sumter at the Holiday Hoops Fest at Eau Claire High School.

Bamberg-Ehrhardt will play host to C.E. Murray in the Class A Lower State final Friday.

Life is funny. I once heard it said that “Life is like a box of chocolates, you never know what you’re going to get."

Michigan rises to No. 2 in AP poll; Clemson returns to rankings

Michigan jumped to No. 2 in The Associated Press college football poll on Sunday and Oklahoma State joined the top five for the first time sin…

Clemson-Carolina challenge: How well do you know the rivalry?

Challenge yourself with this quiz before Clemson and Carolina tough it out on Saturday.

SC STATE FOOTBALL: Bulldogs at No. 5 in HBCU coaches poll

There weren’t many surprises in Week 12 of HBCU football and thus not much movement in either the Boxtorow coaches or media polls.

Edward "Punky" Holler, a 1963 graduate of the University of South Carolina, a three-time letter winner in football and a two-year letterman in…

Tom Brady talks about what he looks forward to in retirement

Orangeburg-Wilkinson hitter Stephany Brailey goes for a kill during a 3-0 loss to Gilbert Monday night. O-W will play host to the Lady Indians in Orangeburg Thursday.

Orangeburg-Wilkinson's Mackenzie Morgan prepares to serve during the Bruinettes 3-0 loss at Gilbert Monday.