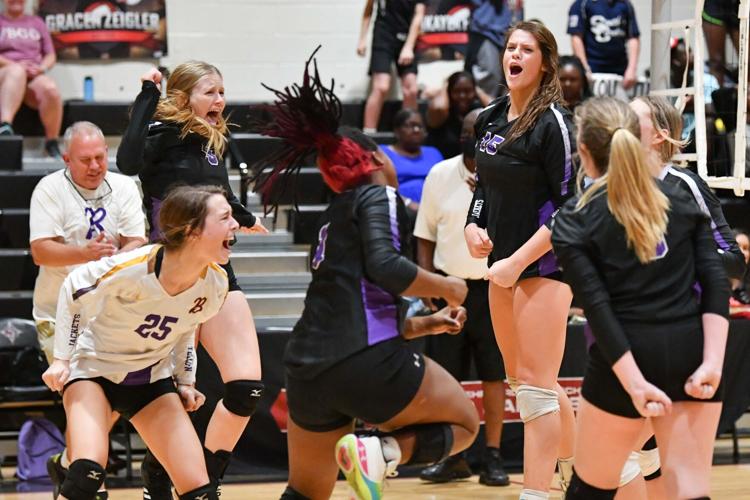 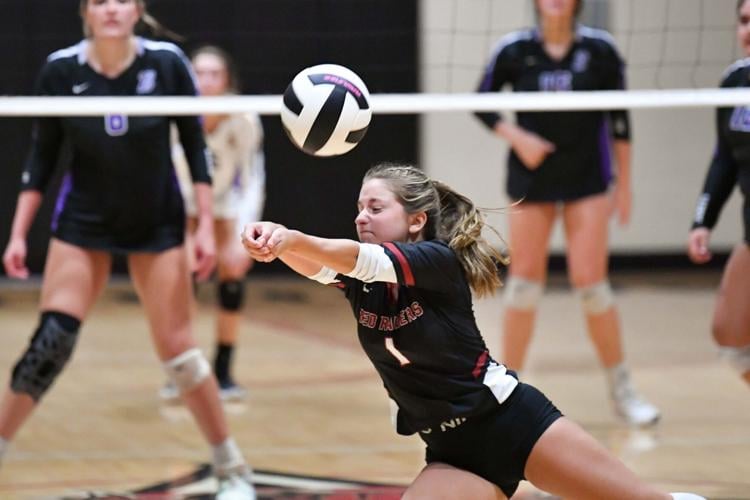 Bamberg-Ehrhardt's Gracen Zeigler (1) dives for a save against Branchville Tuesday.

“It could have gone either way,” Branchville head coach Ron Nester said. “It just felt that we were a little more confident. Bamberg got a little tentative in the end, didn’t really attack us and allowed us to attack. Bamberg is a great test, and we will probably see them again.”

“We came out slow,” B-E head coach Deanna Merchant said. “Our first match was not our strongest. The serves were rough and we were not swinging hard, but we fought in the second match.”

Bamberg-Ehrhardt was able to take the first game of the second match after falling behind 16-14. The Lady Raiders would outscore Branchville 11-3 to get the victory.

In game two, Branchville would pull away late to tie the match, and force a deciding third game. With neither team able to gain an advantage, Branchville found a way to pull out the three point win.

“It was all about grit,” Nester said. “(In the second match) we lost that first set, but came back fighting. We didn’t play our best, we had a lot of errors, but we kept that fighting spirit.

“It was anybody’s game at any point,” Merchant said. “Fatigue was a bit of a factor (in the second match) but when we get down on ourselves we’re not swinging as hard. This is the toughest game we’ve had all season.”

TheTandD.com has a new special: $1 for 26 weeks

Bamberg-Ehrhardt has lost the region to Branchville each of the last two seasons, but have found their way to back-to-back state championship matches.

“We’ve taken this same path the last two years,” Merchant said. “It seems early to be having this decisive match, but we will see this team again.”

Leading the Lady Raiders was Mi’Kayla Hallman who had 11 kills and 10 digs. Gracen Zeigler had 34 assists; Amelia Stembridge had eight blocks, six kills and six digs; Darbi Bradshaw had five kills and five digs and Cailyn Youmans had five kills, three digs and one block.

SC STATE FOOTBALL: A&T as tough as ever, Pough says

Citadel head football coach Brent Thompson said he had no joy in coaching after leading the Bulldogs through the pandemic.

The Orangeburg Prep and Calhoun Academy rivalry means a lot to both communities.

Who can afford to buy the Phoenix Suns?

Bamberg-Ehrhardt's Gracen Zeigler (1) dives for a save against Branchville Tuesday.