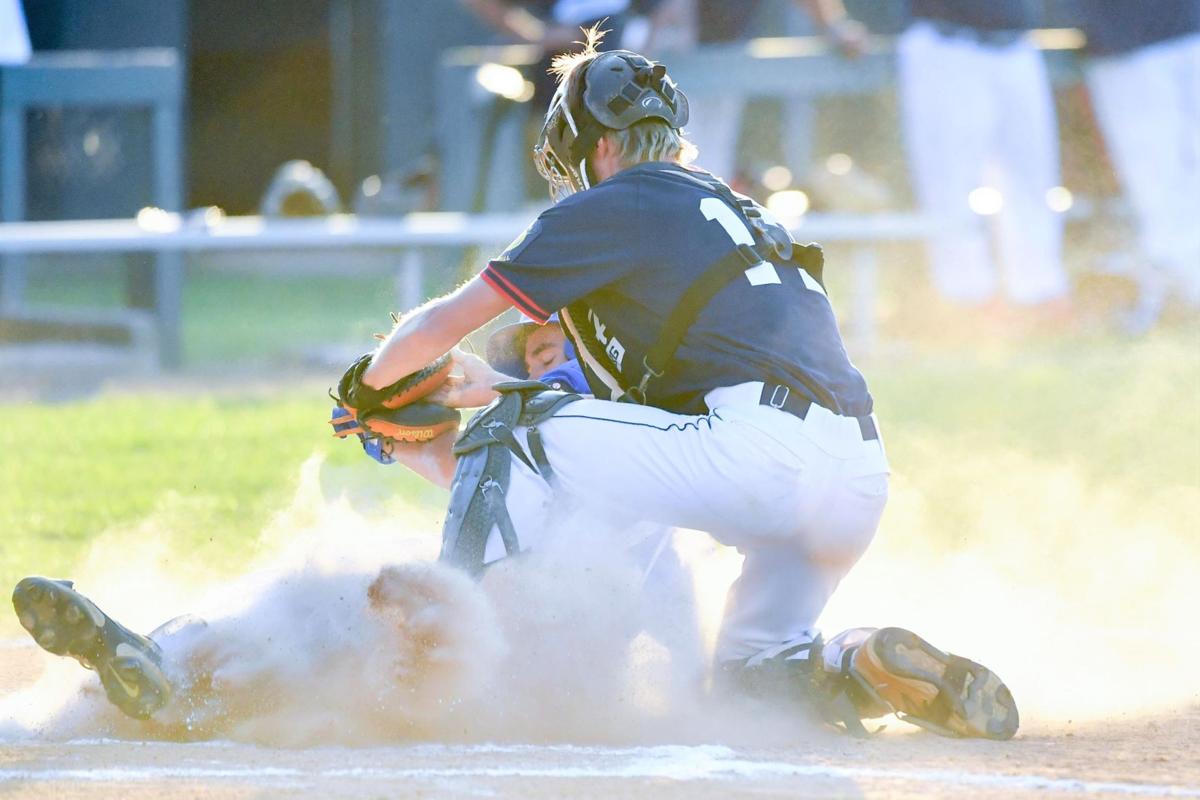 Orangeburg Post 4 catcher Colby Thomas (17) tags out a Charleston Post 147 base runner (No. 21) at home plate during Thursday night's game at Mirmow Field. 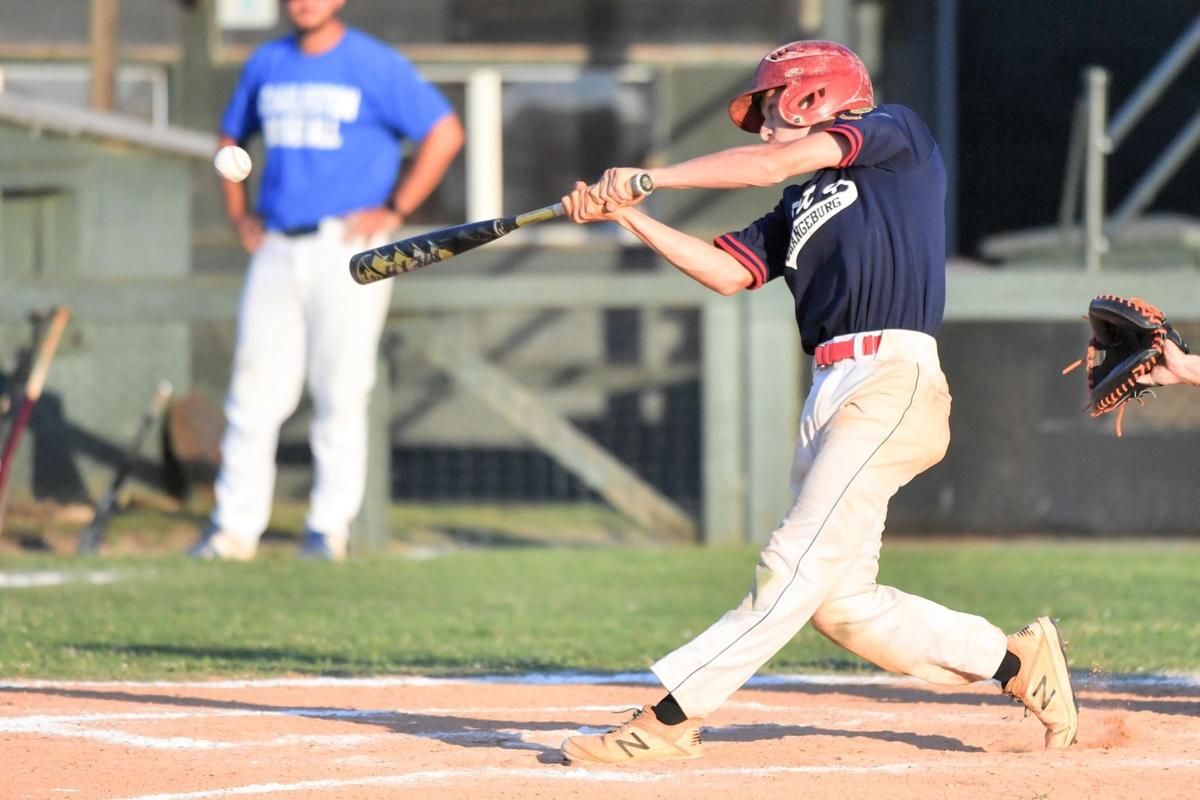 Hunter Hartzog (6) for Orangeburg Post 4 records a 2-run single during the second inning of Thursday's 14-4 home loss to Charleston Post 147.

After a year away from American Legion Baseball being played, the Orangeburg Post 4 team has struggled through 8 games of a 14-game regular season schedule.

Orangeburg carries a 2-6 record heading into action on Monday at Thomas Sumter Academy against the Dalzell Jets, before playing host to Dalzell on Tuesday at Mirmow Field. All game times are 7 p.m.

Post 4 was even 10-run ruled in back-to-back games to end this week, falling 16-1 at home to West Columbia on Wednesday, before falling 14-4 at home against Charleston Post 147 on Thursday.

With just 4 players on the team who have played a full American Legion Baseball season before (in 2019, the last time a full season was played), there is a lot of youth and inexperience on the Post 4 roster.

"To me, this is a stepping stone to see if you really want to play baseball in college," Orangeburg head coach Dukes Isgett said on Friday. "You've got to really love it. And, if you don't really love it, you realize real quick when you are playing 3 or 4 games in a week that you have to be dedicated and you've got to bring it every day.

"We need people to separate themselves, both for starting positions and for leading the team. But, we've had a hard time finding that."

But, a 4-run third inning and a 7-run fifth inning saw the game get away from the home team in a hurry.

"The moral of the story is that your pitchers have got to get ahead (in the count)," Isgett said. "The best pitch in baseball is a first-pitch strike.

"You fall behind at this level, you're going to get beat. You get to a 2-0 count and all of a sudden you've got to groove one for a strike. And, at this level, if you can't hit a fastball, you shouldn't be playing."

The pitching rotation took a further hit recently, as former Orangeburg Prep standout A.J. Tolbert - a starting pitcher for Post 4 - had to leave the team for off-season football workouts at North Greenville University.

"It didn't help us last night that Charleston, as far as I'm concerned, is the best hitting team in our league," Isgett said. "When they hit one through nine in the lineup, and their number nine guy has hit a homer against us, you know they are good.

"There again, we don't have dominant pitching, so we have to rely on defense. But, we've had issues making the routine plays. Last night we had 5 or 6 errors. So, we've got to hit the baseball and make plays, do the fundamentals, just to be in position to compete."

More innings like the 4-run second against Charleston would be welcomed the rest of the season. In that at-bat, Trevor Hilton (Woodland), Copeland Furtick (Orangeburg Prep) and Hunter Hartzog (Dorchester Academy) each drove in runs.

Charleston Post 147 took the lead for good with the 4-run third inning, as Julius Reynolds homered on a 1-1 count, scoring two runs, Garrick Murray singled on a 1-2 count, scoring one run, and an error plated one run.

Charleston's 7-run fifth inning came thanks to doubles by Alex Smalls, L.T. Dantzler, and Reynolds and singles by Zach Shapley and Tanner Henderson.

Dantzler was the winning pitcher for Post 147, going four innings, allowing four runs on five hits and striking out two. Kedar Veeraswamy threw one inning in relief out of the bullpen.

Hunter Bauer (Branchville) took the loss for Orangeburg Post 4, going four innings, allowing 13 hits and 11 runs, while striking out two and walking none.

Hartzog went 2-for-2 at the plate to lead Orangeburg Post 4 in hits.

"We've got guys who put the ball in play, so it's going to boil down to who can hit a baseball," Isgett said. "We've got a lot of guys who can play defense.

"You've got to hit the ball to score runs. You've got to execute bunts to be able to score runs, or just to move runners. You've got guys on second and third with no outs, you've got to find one of the many ways to score them. But, when you pop up on the infield or strike out, you're not going to do to well. Mental errors on the bases have taken us out of scoring situations too. We've got to keep the game close, by getting ahead on counts in pitching, knowing the better teams will be pretty good at the plate."

Isgett credits his assistant coaches, Tate Jamison, Chris Thomas and Andrew Isgett, for encouraging the Post 4 players and coaching them up during practices and games.

"We can talk all we want about the old days and the players who have played for Post 4 and what teams before this one did. But, it's not like you're going to reinvent the wheel in a month or so of the season. We've got guys who double clutch the ball in the infield, guys who don't get in front of the ball in the infield and guys who don't have a 2-strike approach at the plate. But, the beauty of it is that most of these guys are younger guys who can improve their play as this season goes on and come back even better next season."

Orangeburg Post 4 catcher Colby Thomas (17) tags out a Charleston Post 147 base runner (No. 21) at home plate during Thursday night's game at Mirmow Field.

Hunter Hartzog (6) for Orangeburg Post 4 records a 2-run single during the second inning of Thursday's 14-4 home loss to Charleston Post 147.