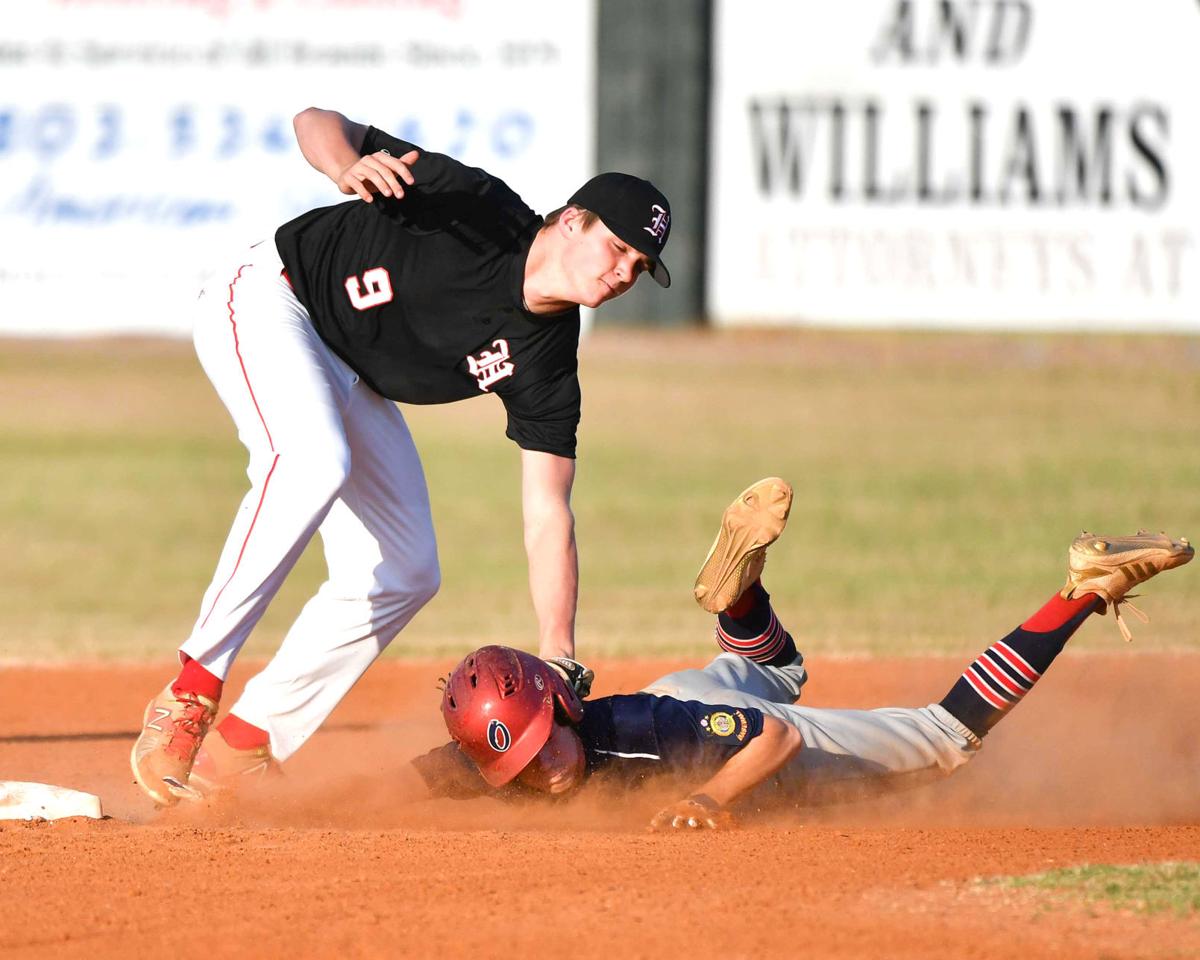 Post 4 base runner Hunter Bauer is tagged out by Hampton Post 108 shortstop Evan McCutchen on an attempt to steal second base in the first inning of Thursday night's League I game at Mirmow Field. 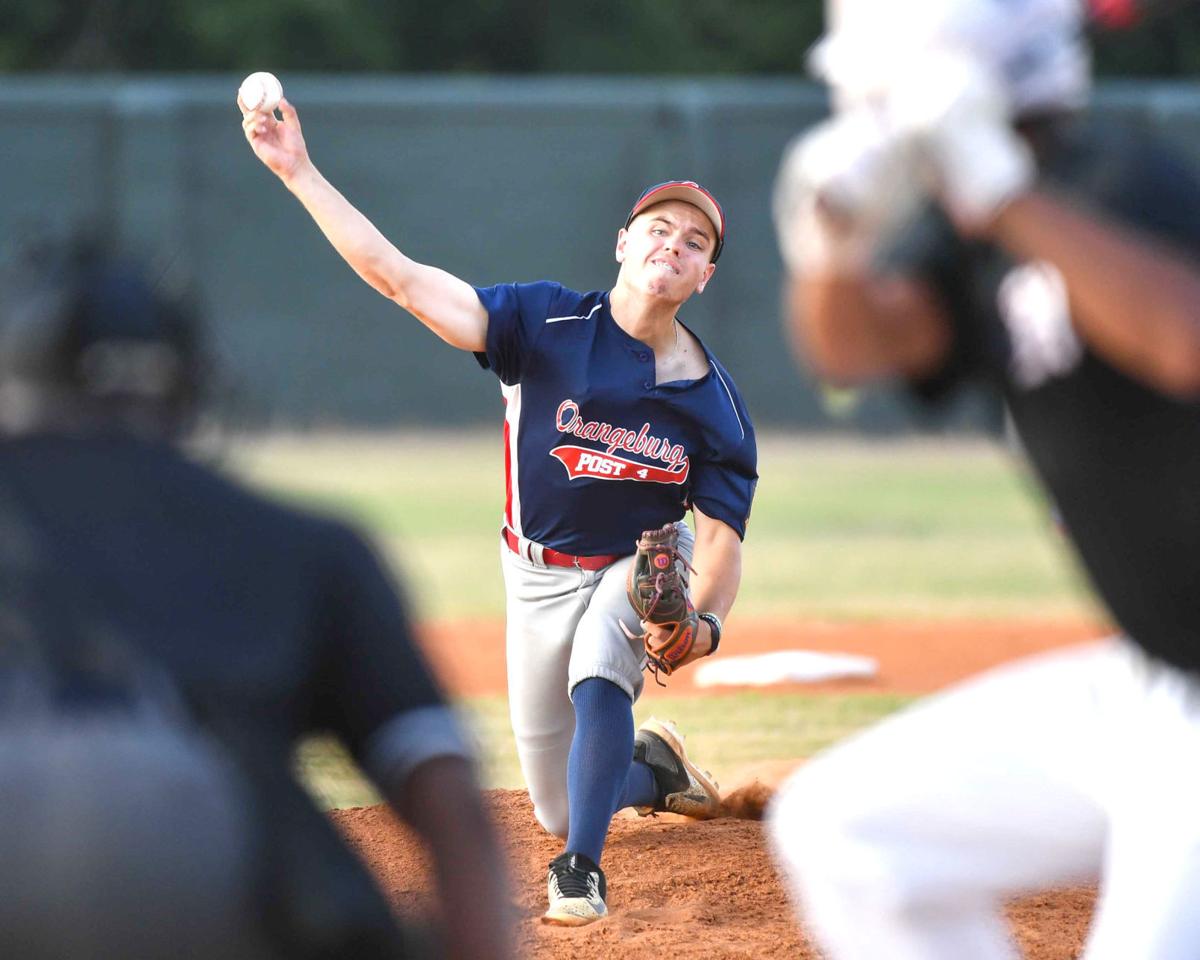 The Orangeburg Post 4 American Legion Baseball team was in position to get a second win in League 1 play on Thursday, right up until Hampton Post 108 plated 7 runs in the fifth inning to help the visitors secure a 12-6 win at Mirmow Field.

Post 4 managed just 5 hits and sent 5 different pitchers to the mound in the second straight league loss, the first home loss of the season.

Having lost 3 pitchers from the rotation since game one just 9 days earlier, including 2 to injuries, the depleted Post 4 bullpen struggled on Thursday against a Hampton team that collected 12 hits.

Orangeburg (3-5 overall, 1-2 in League 1 play) returns to action on the road Friday at Thomas Sumter Academy against Dalzell at 7 p.m. in a non-league contest.

Adam Creswell got the pitching win for Hampton, giving up just a single run on 3 hits through 4 innings, while picking up 7 strikeouts. Lane Lee, Matt Poston and Evan McCutchen each pitched in relief, with only Poston struggling through 4 batters who each scored for Post 4.

Noah Bearden shouldered the pitching loss for Orangeburg, going 4-plus innings, allowing 7 runs on 7 hits and 4 walks, while striking out 2. Wesley Brown, Joshua Edwards, Bryceton Bramlett and Skye Foster each took turns pitching in relief the rest of the way.

Hampton got on the scoreboard first, plating a run in the second inning with Jacob Lope leading off with a double before scoring on a single by Bryce Tillitson.

The 1-0 lead increased to 3-0 in the third, when an error on a double plated Adam Creswell and a 2-out single from Lee plated Evan McCutchen.

Post 4 got started scoring with a run in the fourth. Heath LaChance led off with a hit-by-pitch and later scored on a bases-loaded fielder's choice for a 3-1 score. Orangeburg had the bases loaded twice in the first four innings, but managed just the one run from the good fortune.

The big at-bat came for Hampton in the fifth, when 12 batters came to the plate and 7 of them rounded the base paths to score. McCutchen, Poston, Lee and Tillitson each singled and scored in the inning. Poston and Tillitson's hits plated a run each, before Jackson Morello plated a run with a bases-loaded walk and Creswell then plated 2 runs with a double. Post 108 held a 10-1 lead until the top of the sixth.

Hampton just picked up where it left off, plating 2 runs thanks to a double by Lee, a 2-out walk by Cameron Cook, and a 2-run double by Morello.

In a situation of too little too late, Orangeburg scored 5 runs in the bottom of the sixth inning. John Mack started things by leading off with a hit-by-pitch. Bearden singled, Savon Stokes walked, and Bramlett had a hit-by-pitch for an RBI. Bearden scored on an error, Hunter Bauer and Skye Foster each walked in runs, and Bauer later scored on a wild pitch.

Orangeburg made 4 errors in the contest, compared to just one miscue by Hampton.

Post 4 will play back at Mirmow Field on Tuesday, taking on Charleston/Goose Creek in a League 1 contest at 7 p.m.

DALZELL — In the only non-League 1 game of the week for Orangeburg Post 4, Dalzell-Shaw picked up a 9-1 win on Friday night at Thomas Sumter Academy.

The past week has been frustrating for the Orangeburg Post 4 American Legion Baseball team.

Post 4 base runner Hunter Bauer is tagged out by Hampton Post 108 shortstop Evan McCutchen on an attempt to steal second base in the first inning of Thursday night's League I game at Mirmow Field.