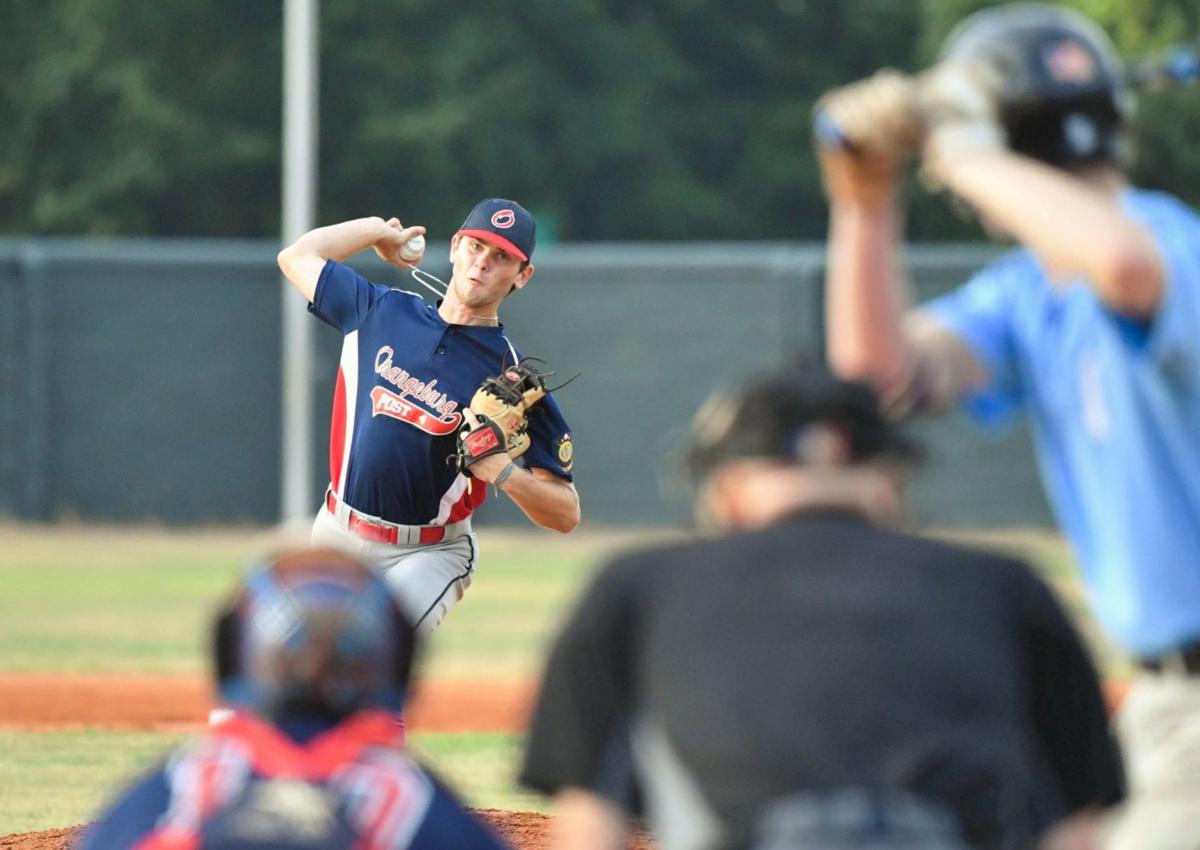 Heston Thompson (Branchville High, USC-Salkehatchie) pitches during one of his 7 complete innings in picking up a win for Orangeburg Post 4 against Charleston/Goose Creek Post 166 at Mirmow Field in June of 2019. 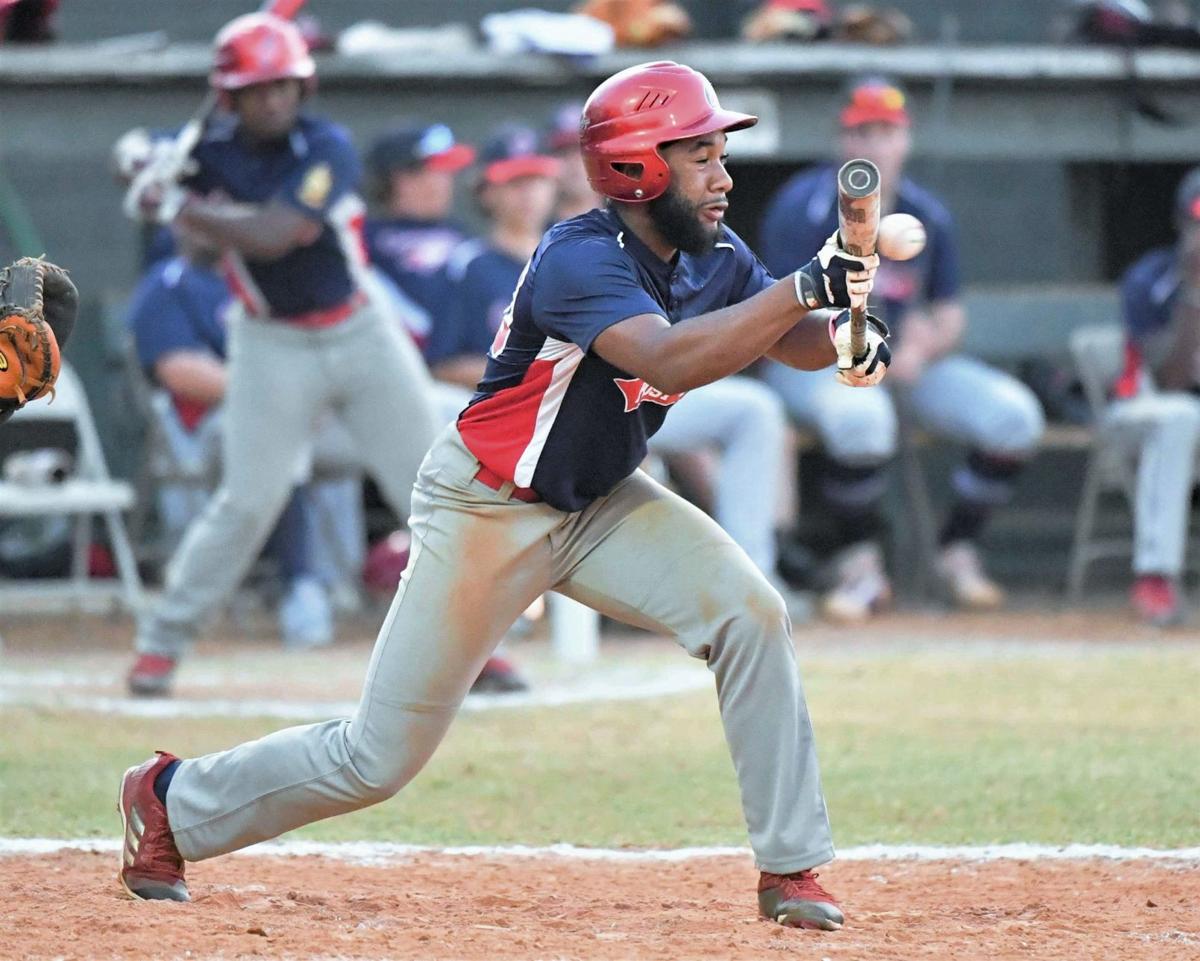 Nicholas Lawson (Orangeburg-Wilkinson) bunts for a base hit to load the bases for Orangeburg Post 4 on Tuesday, June 4, 2019 at Mirmow Field, as part of a 5-run fourth inning in an 8-4 win against Charleston/Goose Creek.

There could be baseball this summer, but it won't be American Legion Baseball.

American Legion’s Department Executive Committee made a mid-April decision to cancel this summer’s state legion baseball seasons for senior and junior leagues, due to the ongoing coronavirus pandemic.

A total of 26 DEC members, in virtual attendance for the meeting, voted unanimously to end plans for the 2020 campaign. Many other states have seen their American Legion officials decide the same, with at least Nebraska voting to cancel the postseason but play as many regular season games as possible.

It marks the first time American Legion Baseball in South Carolina has been canceled since 1928.

Some have questioned the early vote, pointing out that it could have waited until later in May or early June.

But, Walt Richardson, Department Commander for the American Legion in South Carolina, said the decision was needed and came at the right time.

The DEC listened to state legion baseball director Legree Oswald’s persuasion to postpone a vote on the season, but ultimately voted due to the continued threat of COVID-19 to the general public's health.

“It’s not worth having one person sick or one person passing away because we decided to have baseball season. That’s just not going to happen,” Richardson told The Morning News in Florence. “With the DEC, we have a whole bunch of programs we have to look after. We have an entire department to look out after. We don’t have the luxury of just looking out after one thing.

"We had to make the hard decision to cancel baseball, and it was a unanimous vote. There was not one member of the DEC in virtual attendance who voted to postpone the season’s vote.”

Meanwhile, an online petition by Greer Post 115 athletic director Cyrus Berdan has been circulating in hopes of persuading another vote, reconsidering having a season. In just a few days, the petition had more than 600 signatures.

But, if the DEC does not have a second vote or votes with the same result, American Legion Baseball coaches and high school coaches who did not get to have a complete season are looking at an alternative plan.

All want to abide by state regulations implemented by the governor's office. But, all would like to offer high school baseball players the opportunity to play this summer, if they can do so in a safe environment for themselves and fans in the stands.

As of May 1, the Orangeburg Post 4 chapter of the American Legion has informed Post 4 head baseball coach Dukes Isgett (Calhoun County High School head baseball coach) that the local chapter will not be able to sponsor or support a team this summer, due to the DEC decision and the fact that many local post members are at high risk to get the virus.

However alternative baseball season plans are in place, in case the president and governor announce that the Centers for Disease Control and Prevention, along with other advisors, decide it is safe for the public to gather once again at sporting events.

Simply put, eligible players for a Post 4 team in 2020 could have the chance to play for an area team, but it might end up playing away from Mirmow Field, wearing jerseys sponsored by a local business or organization.

American Legion Baseball and high school baseball coaches across South Carolina have had discussions, with as many as 26 teams showing serious interest in an independent baseball league to play at some point this summer.

Some, including Sumter, Florence and Greenwood, have said they could play with sponsorship from their local American Legion post. Other areas have support to have a team sponsored by local high schools.

If government approval for gatherings takes place, then each baseball team would be able to practice at a field available to them and plan to play at least an abbreviated season.

"The moral of my story is, if there's any possible way for these kids to play baseball, and do so safely, we will play," Isgett said. "The issue will be, if they don't open up places.

"We have looked at insurance covering everyone (players, sponsors, coaches, fans and umpires) involved, travel expenses and paying umpires. A lot of it is a replication of what North Carolina teams have already planned. Of course, everything hinges on whether we can get together or not."

Isgett has had many local parents and baseball players texting and calling him in recent weeks, wanting to know if there is any chance they will be able to play this summer.

"The interest is there, and there are many (high school) seniors looking for a place to play, maybe for the last time they'll have a chance to play on a team," Isgett said. "I've been checking with (Florence Post 1 head coach) Derick (Urquhart) and others who are trying to get ahead of the game, so we're ready to go if there's any opportunity to have baseball.

"Everyone is disappointed at this point, but it's not over."

It's possible that any independent league will need to garner permission from the South Carolina High School League to have baseball play continue into August, a month the league normally has listed as closed to any organized baseball activity.

"Right now the plan would be to practice in June, play in July and have state playoffs set up in August," Isgett said. "Teams would be allowed to have as many as 25 players on a roster and they would play competition closest to their area of the state for most of the regular season, limiting travel.

"But, of course, all this hinges on what our governor says and what our health organizations find out in the coming days of this crisis."

Orangeburg County has five more confirmed cases of coronavirus and Bamberg County has one, according to figures released Monday by the S.C. De…

The Orangeburg Braves: 'Heavenly baseball' at Mirmow Field in the 1940s

SUMTER — Kelvin "JR" Keller Jr. put aside baseball when he graduated from Calhoun County High School in 2018 and signed with the University of…

No sounds of bouncing balls. No scuffing of sneakers against dusty concrete. No whipping of basketballs as they fall through nylon nets or met…

Heston Thompson (Branchville High, USC-Salkehatchie) pitches during one of his 7 complete innings in picking up a win for Orangeburg Post 4 against Charleston/Goose Creek Post 166 at Mirmow Field in June of 2019.

Nicholas Lawson (Orangeburg-Wilkinson) bunts for a base hit to load the bases for Orangeburg Post 4 on Tuesday, June 4, 2019 at Mirmow Field, as part of a 5-run fourth inning in an 8-4 win against Charleston/Goose Creek.