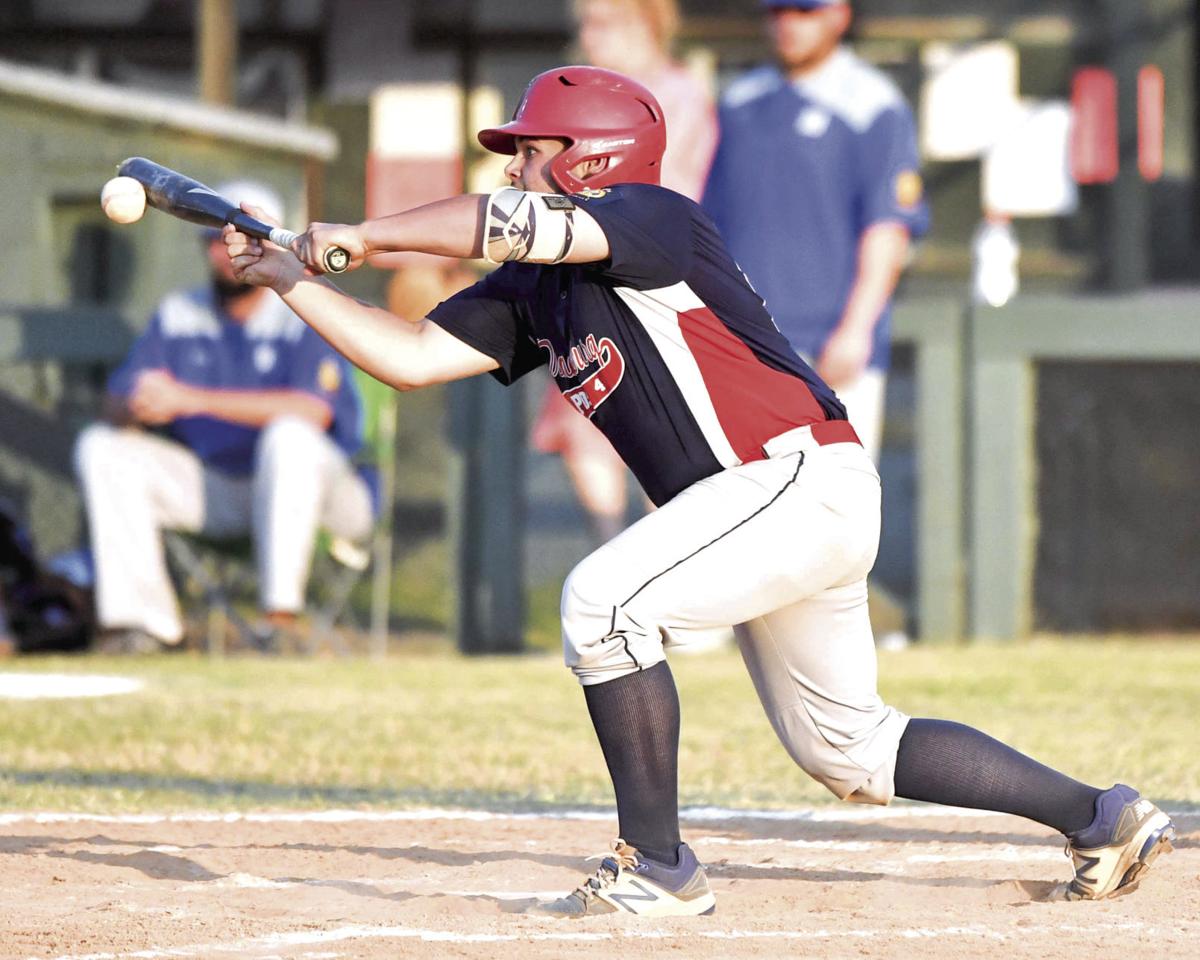 Orangeburg Post 4's Bryceton Bramlett looks to move base runners by laying down a bunt during the League 1 opener against Manning-Santee Tuesday night at Mirmow Field. 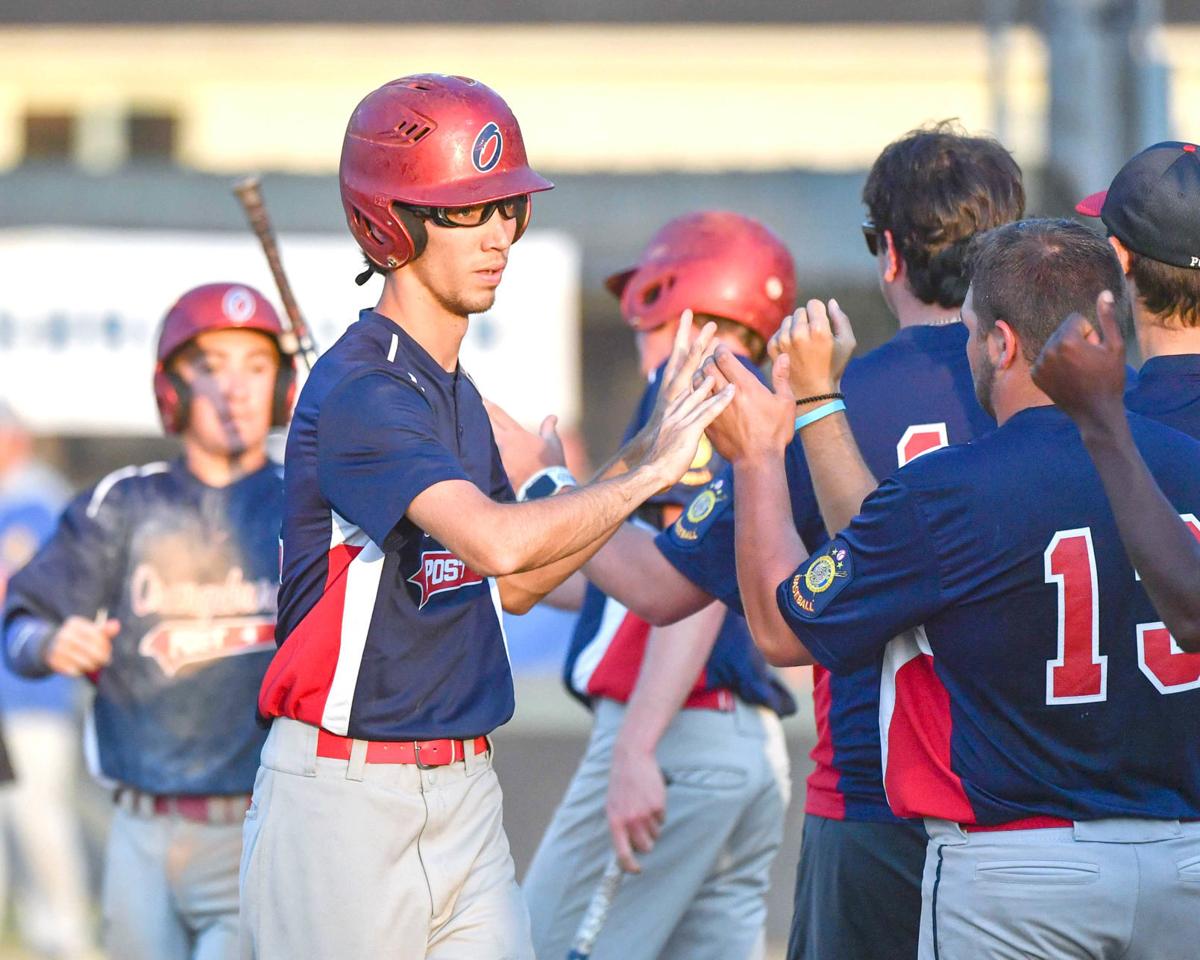 Orangeburg Post 4's Skye Foster celebrates with teammates after driving in a run with a sacrifice fly in a 4-run second inning on Tuesday evening against Manning-Santee at Mirmow Field.

The Orangeburg Post 4 American Legion Baseball team stayed unbeaten at home this season while opening the League 1 schedule on Tuesday with an 8-4 win against Manning-Santee Post 68 at Mirmow Field.

Post 4 had strong pitching, consistent hitting and a one-error game on defense.

The improved play and result was a welcomed change from losing the final three games Orangeburg played in the Post 1 Invitational Tournament through the Memorial Day weekend.

"We did well, pushing some runs across the plate tonight," Post 4 head coach Dukes Isgett said. "We had timely hits when we needed them.

"We hit all the way through the lineup. Everybody contributed, and that's what you want to see, especially after laying an egg over the weekend on the road."

Post 4 (3-3 record) will continue playing its 4-game schedule this week on Wednesday, traveling to play Charleston at 7 p.m. at Cane Bay High School. The Orangeburg team will return to play at Mirmow Field on Thursday to take on its third straight league foe - Hampton - at 7 p.m.

"This is a very important week," Isgett said. "You want to get these wins, since teams get better as the season goes on, usually.

"If you can catch them now, at the right time, take advantage of errors and don't make too many, it's good. We were aggressive on the base paths tonight, maybe a little too aggressive at times. Most of our bunts, we sacrificed guys over, and with sac fly balls, we found ways to get runs in."

Heston Thompson picked up the win for Post 4, pitching 5-plus innings, allowing just 7 hits and 3 earned runs, against 6 strikeouts.

Jake Jordan led Manning-Santee with a 3-for-4 game, 2 doubles, an RBI and a run scored. No other Post 68 batter had multiple hits.

Manning-Santee opened the scoring in the first inning, with Grey Garrett reaching on an error, stealing second and scoring on a 2-out single by Jordan. On the same play, a 2-base error by Post 4 allowed Luke Stokes to round second on the hit and continue running to third and home for a 2-0 lead.

Post 4 answered in the second inning, when Bearden reached on a walk, Bramlett reached on a fielder's choice, and LaChance loaded the bases with an infield single. Bauer singled in Bearden and Bramlett, to tie the game. Foster delivered a sacrifice flyout to plate LaChance, before Rickenbaker singled in Bauer. Orangeburg led 4-2 after 2 innings of play.

The scoring continued for the home team in the third inning, when Deuce Bailey reached on one of his 3 walks in the game. Savon Stokes came in to run for the catcher and stole second base and third base. Bearden then doubled in Stokes, before scoring himself two batters later on a sacrifice fly by LaChance. Orangeburg led 6-2 after 3 innings of play.

Jordan singled to start the fourth, later scoring to make it a 6-3 game.

Post 4 got that run back with Rickenbaker starting the bottom of the fourth with a single and later scoring on a 2-out single from Bailey. Orangeburg led 7-3 after 4 innings of play.

Both teams added a run in the sixth. Sandy Johnson was hit by the last pitch Thompson threw in the game. He later scored on a wild pitch.

Foster scored the final run, starting the bottom of the sixth inning with a single and scoring from second an out later on a double by Sandifer.

Joshua Edwards pitched to 3 batters in the sixth, getting an out while also allowing a walk and a hit. Sandifer came in from center field to strike out 3 of the 6 batters he faced to close out the game. He allowed 2 walks and no runs, as Orangeburg evened its record.

SUMMERVILLE – The Orangeburg Post 4 American Legion Baseball team picked up its first League 1 loss of the season on Wednesday, dropping a 2-1…

The Orangeburg Post 4 American Legion Baseball team was in position to get a second win in League 1 play on Thursday, right up until Hampton P…

For the second straight night, the Orangeburg Post 4 American Legion Baseball team has had a game rained out and postponed to a later date.

Orangeburg Post 4's Bryceton Bramlett looks to move base runners by laying down a bunt during the League 1 opener against Manning-Santee Tuesday night at Mirmow Field.

Orangeburg Post 4's Skye Foster celebrates with teammates after driving in a run with a sacrifice fly in a 4-run second inning on Tuesday evening against Manning-Santee at Mirmow Field.