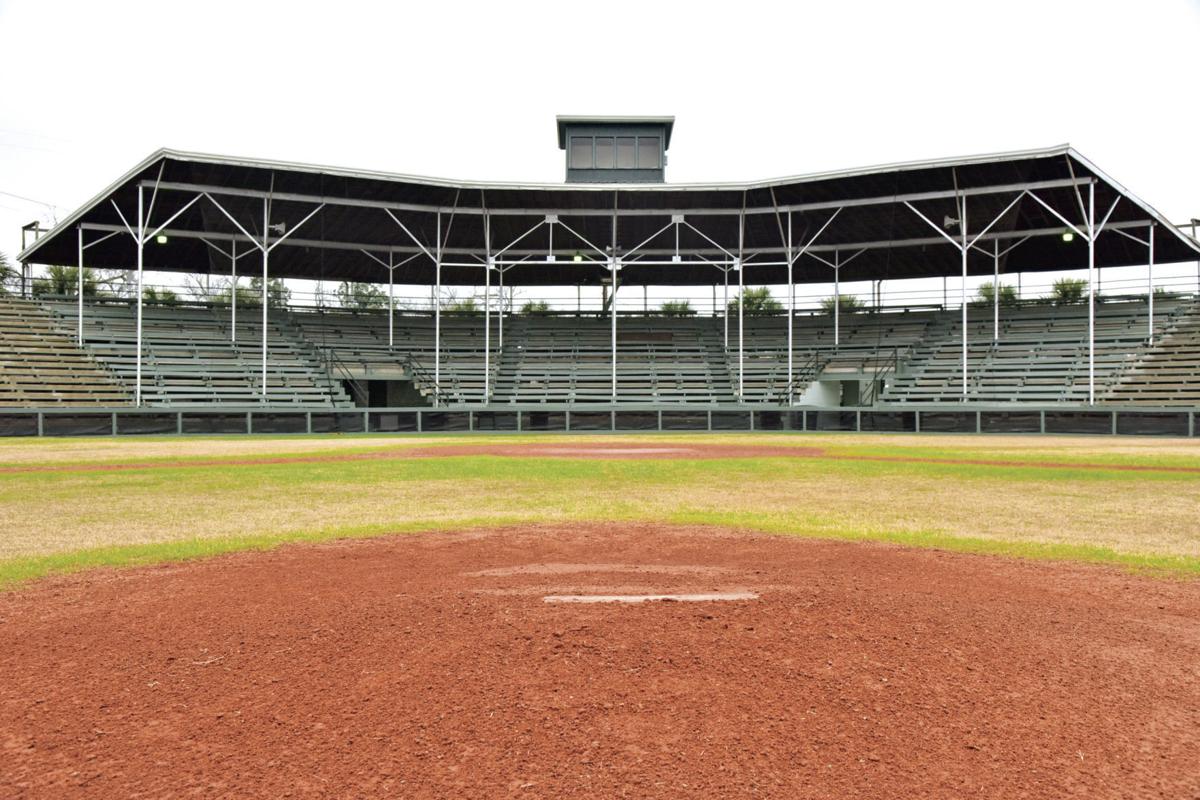 Mirmow Field was built in 1948. The layout echoes the playing days back in the 1940s. Among the odd features that Mirmow offers are the flagpole and two light poles that can be found in the field of play. 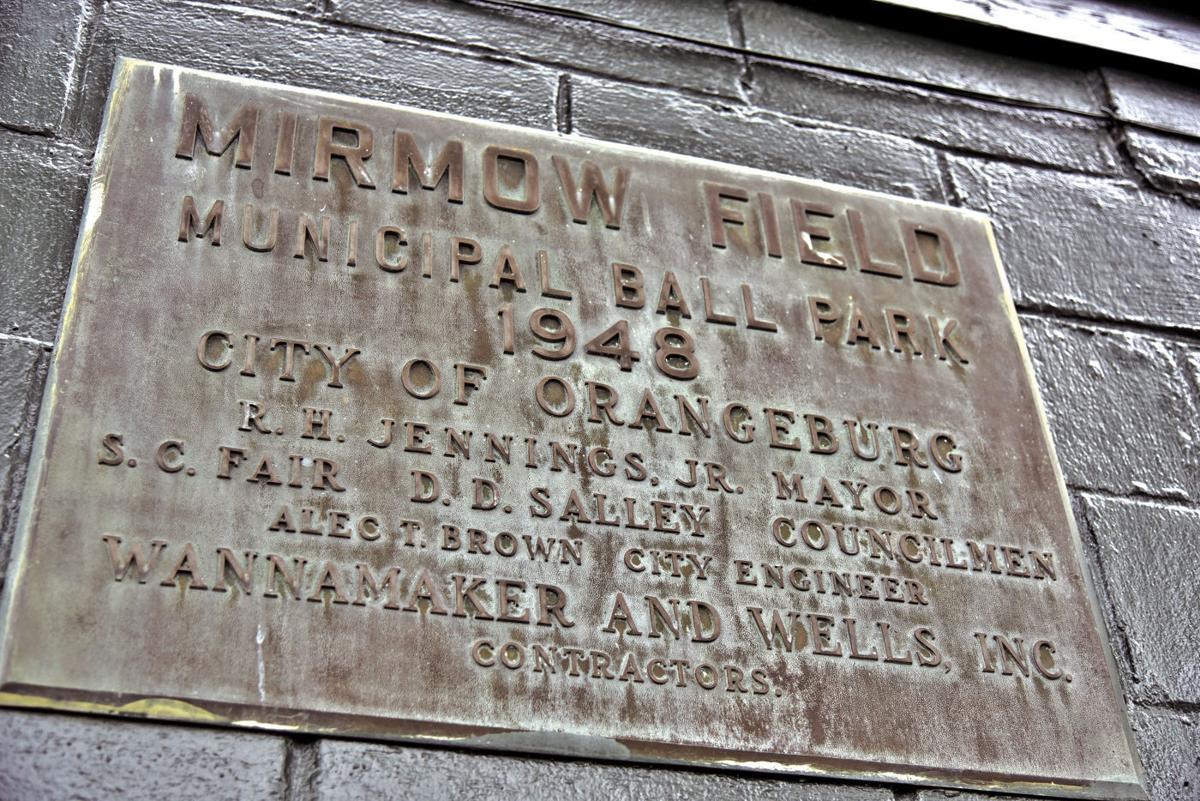 Mirmow Field was built in 1948. The layout echoes the playing days back in the 1940s. Among the odd features that Mirmow offers are the flagpole and two light poles that can be found in the field of play. The flagpole stands tall by the center field wall while one light pole stands in front of the left field wall. .

Mirmow Field is enclosed by its own version of the "Green Monster." Although it's not as big, or maybe not as green, it's still dangerous. The green outfield wall surrounds the entire stadium, but it has its biggest impact in the outfield. Covered only by thin signs to display the names and contact information of local sponsors.

There was a time when regular crowds of more than 1,000 fans would attend Orangeburg's historic baseball park to catch a few innings of baseball with the boys of summer.

And while those boys still play, times have changed and those lofty figures have steadily dwindled away to much more modest numbers. Still, the story of Mirmow Field is one to be remembered, as are the performances of the stars that have left their mark on its storied diamond.

Orangeburg Post 4 fielded an American Legion team for a couple of seasons before the outbreak of the war and with the onset of global fighting, the team went on hiatus as did many during that time of extreme crisis. But with the Allied victory over Germany, Italy and Japan complete, life began to return to normal back home, and that meant baseball.

The team that Orangeburg Post 4 put on the field, or at least what served as the field in those days over at a cleared space at the fairgrounds, when it re-emerged in 1946 was a good one. But the 1947 squad was better, capturing a league championship. With 1948 came another league championship, and the construction of a ballfield worthy of being called home.

This is how it happened.

The success of the 1946-1947 Post 4 teams, along with some added interest from semi-pro and minor league ball clubs, sparked the idea within the community that Orangeburg needed a quality baseball field. And that idea became a reality when the much needed revenue for a field became available after the sale of land that was once home to Hawthorne Field.

A lot between Rowe and Whaley streets was purchased with the funds, construction of then-Orangeburg City Engineer Alec Brown's design began, and a new field was born. All that was needed was a name for the new stadium.

Then-Post 4 public relations manager Harry Roberts said in 2001 that it couldn't have been named for a better supporter of Orangeburg baseball than the man serving as Post 4 Athletic Director Edward V. Mirmow Sr. in 1948.

"Mr. Mirmow was 'Mr. Baseball' around here then," Roberts said in an interview with The T&D. "He helped us with having a place to play and with bats and balls. He was a very congenial man and a great person to be around."

Roberts, a major part of American Legion baseball in Orangeburg for decades, was in his 20s then and remembers keenly wondering just what type of field the community was getting for its money.

"When they started clearing the land and putting up the block in the outfield I wondered what was going on," Roberts said. "I just thought that it was an odd way to build a wall and a stadium."

The late Hank Mirmow, son of the late "Mr. Baseball,” said in 2009 that in those days, Mirmow Field was considered a marvel of modern design.

"Everything about it from an engineering standpoint was revolutionary back then," Mirmow said. "The whole stadium is made of cement block, which was a novel idea at the time."

What was cutting-edge design in 1948 has now become a classic slice of Orangeburg Americana. In addition to the field playing home to a semiprofessional baseball team for a short time and also the spring training home of the New York Yankees' Double-A minor league team for several years, it's also held a few American Legion regional playoff series, and even an American Legion World Series.

Mirmow Field has also graced the big screen in a major motion picture, when the production crew and actors for the 1997 film "Major League III" came to Orangeburg to film several scenes. Steve Rhea was the location manager for the film and congratulated the city for its preservation of Mirmow Field in a 1997 interview.

"Whatever they do here, don't touch Mirmow Field except perhaps to put a coat of paint on it once in awhile," Rhea said. "Mirmow Field is a gem, and it will always shine."

The ballpark last underwent major renovations in 1996, which included a new scoreboard, lighting repairs, a new roof and the leveling of the infield. In 2008, Century 21 The Moore Group held a home run derby at the field that raised $2,300 for upkeep of the stadium. New additions included Palmetto trees and a new sign for the stadium's entrance.

Mirmow Field has had its share of talented players to traverse its base paths over the years, including a number of Orangeburg area legends that went on to play baseball in the major leagues. Nathaniel Snell, Bill Spiers (Astros), Mookie Wilson (Mets and Blue Jays), the late Mike Sharperson (Dodgers), Herm Winningham (Reds), and Jimmy Ferry all called it home before heading off to pro careers.

Those American League players and many more, have presented Orangeburg with four American Legion state championships, which came in 1961, 1963, 1970 and 1979. Claude Myers, a third baseman on the 1947 team that helped to get things started for Post 4, coached all four state championship Orangeburg teams to their respective titles.

That 1970 team, which featured Bill Sharpton, Haney Bull, Sharperson, Wilson and Snell, played before the largest paid attendance crowd ever at Mirmow Field (3,060) in a memorable state title series with a powerful Anderson team that featured Jim Rice, who would later go on to star for the Boston Red Sox.

Sadly, those days of standing-room-only crowds at Mirmow Field have long since passed into distant memory.

"Since 1979 we haven't had a single game that we had over 1,000 in attendance and it just shows how much baseball has fallen," Hank Mirmow said. "There are just too many other activities going on these days. Television and air conditioning changed things. It used to be that we had 65 players by invitation only, to try out for the team. Now, when we have 30 boys come out … it's considered a good year."

The Orangeburg Braves: 'Heavenly baseball' at Mirmow Field in the 1940s

Mirmow Field was built in 1948. The layout echoes the playing days back in the 1940s. Among the odd features that Mirmow offers are the flagpole and two light poles that can be found in the field of play.