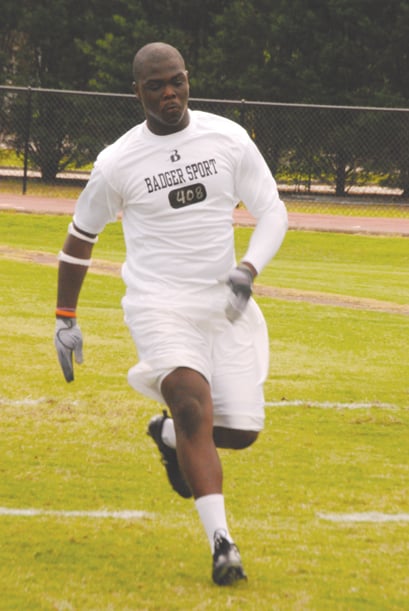 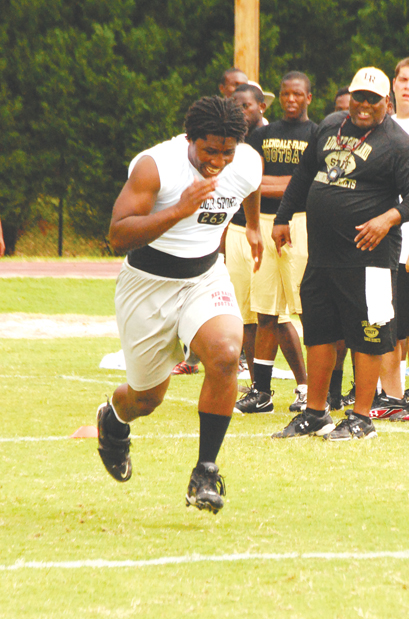 The same is even true for freshman teammate linebacker K.C. Crosby, who's already projected by Scout.com as the top Palmetto State prospect for the class of 2014 and has received verbal offers from the University of South Carolina and Pittsburgh.

Both could have easily excused themselves from Saturday's Badger Sport South Showcase Combine held on their home campus. Instead, Aiken and Crosby saw an opportunity not only to measure themselves against other athletes from South and North Carolina, but to improve their own standing with better showings in the various weightlifting and field-test exercises.

"When you stop competing is when somebody steps out and shows that they're better than you," Aiken said. "I'm just one of those guys that all I want to do is compete and have fun."

"You've just got to stay hungry," Crosby said. "You can't just settle with what you have. You have to stay hungry and got out and get more."

An estimated 75 prep football players signed up for the day-long combine. All took part in tests starting in the weight room, followed by times and measurements taken in the 40-yard dash, pro shuffle run and broad jump. The day concluded with individual and team drills designed to measure all of the playing skills against each other under the watchful eye of high school coaches like Lower Richland's Wayne Farmer and B-E's Kevin Crosby.

According to Crosby, both Aiken and his son were able to decrease their 40-meter times. K.C. was timed at 4.7 seconds, while Aiken was a 10th of a second higher.

"You have all these athletes coming through Bamberg-Ehrhardt - (Ricky) Sapp, Da'Quan Bowers. The first one was really Chris Franklin and that's just motivation to go out there and do more and try to achieve more than they did," K.C. Crosby said.

"You look up to those guys and you say ‘Boy, If they could do it, let me see if I can'," Aiken said. "There's always something about those guys doing that that's going to stand out and the door's open for you. You've just got to bust your behind and work hard and get after things and handle your business on and off the field."

"The purpose is to evaluate talent here in South Carolina," Fair said. "Give our kids a chance to shine as far as our ratings go and putting some of these kids who don't get the limelight into the limelight with tests and some of the things going on, especially the 1-on-1 (drills). Bamberg is a good site, always has a perennially good team. Always produces good talent. It has good facilities, so we chose to put it here."

While Allendale-Fairfax and Union County high schools also brought out a number of players, a total of nine players from Orangeburg-Wilkinson, Bethune-Bowman, Lake Marion and Edisto looked to showcase themselves for colleges who use Scout.com to locate prospects.

"If you work hard out here, somebody is going to see you," Lake Marion linebacker Tyrone Aiken said.

"When you see people that are doing better than you, right now it makes you want to work harder to get where they are and become better than them," O-W wide receiver Sam Felder said.

The test results and video footage are expected to be posted at Scout.com early next week, according to Fair. As crucial as such results are in the recruiting process, Fair also advised the players it's not as major as the non-athletic evaluation.

"A lot of kids don't realize they look at just the physical and mental aspect and, obviously, the academic aspect," Fair said. "You've got to be a well-rounded student-athlete. A lot of kids say, ‘Well, he wants to know how strong I am, how fast I am.' That's important, but nine times out of 10, a college coach asks, "What kind of character does he have?" It is one of the first two questions out of his mouth. That's something I'm trying to stress to these young kids and freshman. You've got to keep your nose clean, have high-character values because that's what college coaches are looking for. They don't want an attitude, superstar prima donna that's going to be a detriment to your team and university they may attend. They're investing a lot of money in you. Investing that kind of money, they don't want to take any chances where you're going to mess around once you get to school and jeopardize your scholarship."

Countries that have never won an Olympic medal