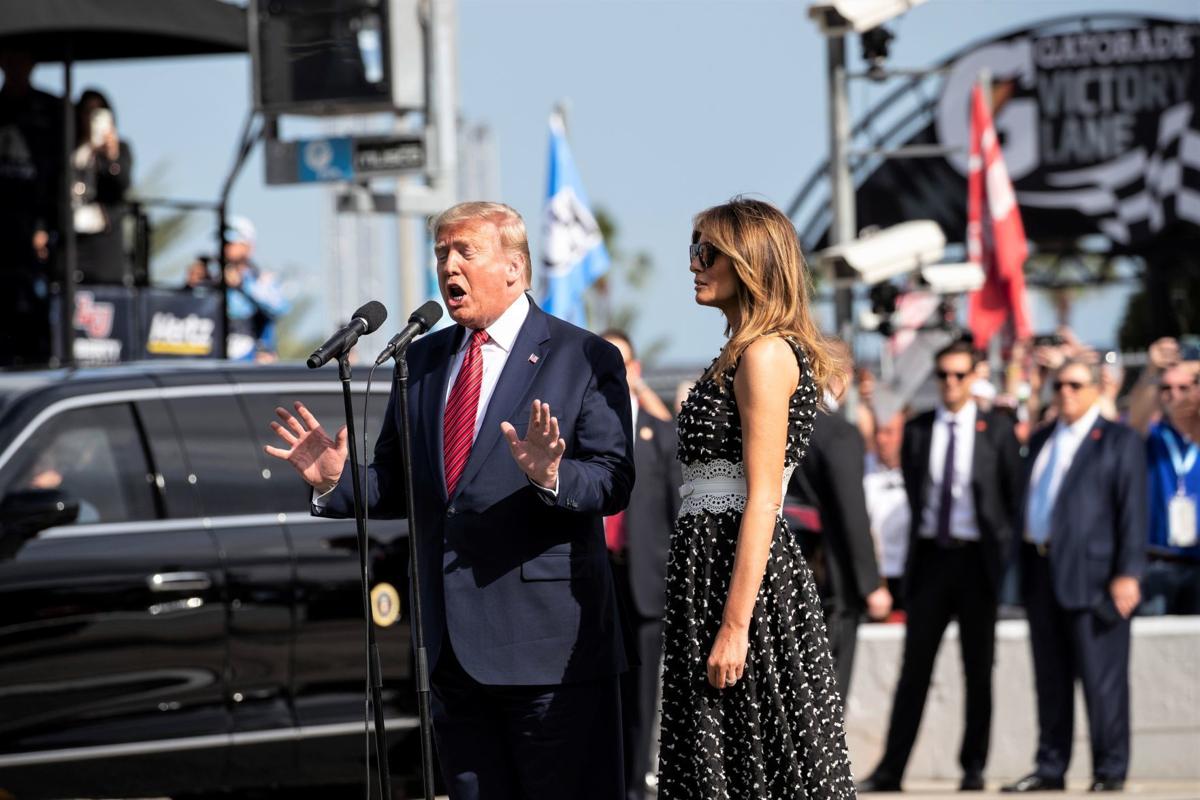 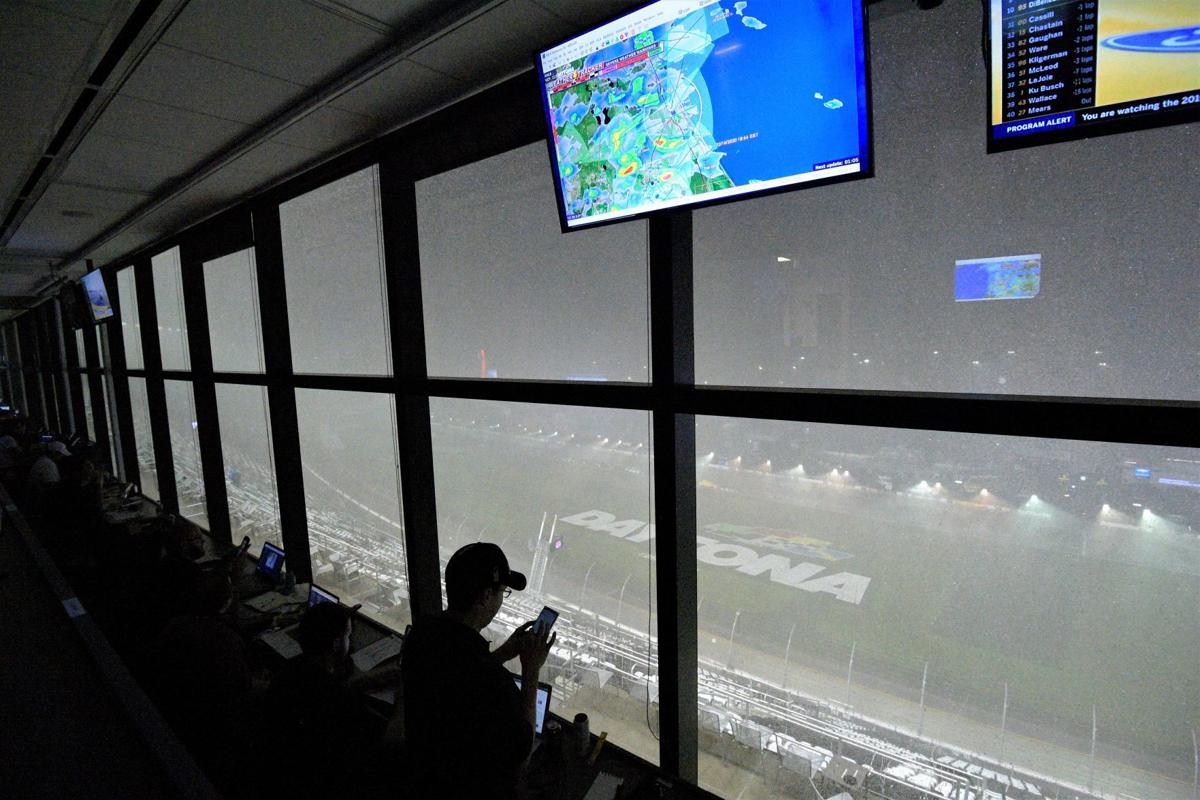 A downpour, as viewed from the press box, forces a postponement of the NASCAR Daytona 500 auto race at Daytona International Speedway, Sunday in Daytona Beach, Fla.

DAYTONA BEACH, Fla. — The Daytona 500 has been postponed by rain for the first time since 2012, dampening NASCAR's season opener that started with a ballyhooed visit from President Donald Trump.

The race was postponed after two lengthy delays totaling more than three hours. The race will now begin at 4 p.m. Monday and be broadcast live on Fox.

It's the second time in 62 years that "The Great American Race" will finish on a Monday.

The first delay of the day came moments after the presidential motorcade completed a ceremonial parade lap around the 2 1/2-mile track. Trump's armored limousine nicknamed "The Beast" exited Daytona International Speedway, and the sky opened for a brief shower that forced drivers back to pit road.

The start already had been pushed back 13 minutes to accommodate Trump's trip. Ricky Stenhouse Jr. eventually led the field to the green flag and was out front for the first 20 laps before heavier rain soaked a racing surface that takes hours to dry.

NASCAR called drivers back to their cars around 6:40 p.m. EST, hoping to get more laps in before more showers hit again. Some drivers showed, but the heaviest rain of the day forced a postponement.

It no doubt choked some of the excitement out of an event that had been a raucous celebration for hours, some of it prompted by Trump's dramatic entrance. Thousands cheered as Air Force One performed a flyover and landed at Daytona International Airport a few hundred yards behind the track. Trump's motorcade arrived a few minutes later, eliciting another loud ovation. Both entrances were broadcast on giant video boards around the superspeedway.

At least a dozen drivers were escorted from the pre-race meeting to a private introduction with Trump.

"I got to meet the president! How cool is that?" driver Aric Almirola said.

Trump served as the grand marshal for the Daytona 500 and gave the command for drivers to start their engines. Trump, with first lady Melania Trump by his side, addressed the crowd and called the opener "a legendary display of roaring engines, soaring spirits and the American skill, speed and power that we've been hearing about for so many years."

"For 500 heart-pounding miles, these fierce competitors will chase the checkered flag, fight for the Harley J. Earl trophy and make their play for pure American glory," Trump said. "That's what it is: pure, American glory."

Trump and his wife then got in the limousine and turned a lap. They avoided the high-banked turns at Daytona and stayed on the apron through the corners.

The president's visit was widely welcomed by NASCAR fans. Trump 2020 flags flooded the infield, and some fans wore them as capes in the garage area.

His presence also created huge lines at entrances, with many fans complaining while waiting hours to get through security.

Former NASCAR chairman and CEO Brian France, who was replaced following his August 2018 arrest on DUI charges, was on Air Force One with the president and first lady. They traveled from West Palm Beach.

Among those who met them at the airport: current NASCAR chairman Jim France and fellow top executives Lesa France Kennedy and Ben Kennedy.

Ryan Newman's latest terrifying crash sends him to the hospital

DAYTONA BEACH, Fla. (AP) — Ryan Newman has barrel-rolled his way through many terrifying crashes over his 20-year NASCAR career. This one, tho…

A downpour, as viewed from the press box, forces a postponement of the NASCAR Daytona 500 auto race at Daytona International Speedway, Sunday in Daytona Beach, Fla.